I was first exposed to the world of Twin Peaks in 2013, though I didn’t know it. Of all things, I had my first encounter on a lazy May day during my first year of college while watching Scooby Doo: Mystery Incorporated. In a Season 2 episode, Stand and Deliver, Scooby Doo visits a strange place called ‘the Sitting Room’. Sound familiar?

But I wouldn’t know just what I’d stumbled upon until a year later in 2014, when I finally sat down to watch Twin Peaks for the first time. One of my very good friends had a boyfriend who was obsessed with the video game Deadly Premonitions, which, for those unfamiliar, is essentially Twin Peaks as a video game, but slightly more Lovecraftian. (There’s a tentacle monster, if I recall correctly.) It led him to Twin Peaks, and while they were dating, he led her. And she – we’ll call her Elle – in turn led me.

It took a bit. It was September. Her boyfriend was now ‘ex’-boyfriend (fun fact, Elle’s ex only had the courage to come out as trans after watching Twin Peaks. Congrats to her!) and I was plenty busy getting my teaching degree. Not now, I told her. It’s short, she said. And like any good friend she told me four things.

I caved instantly. David Duchovny has that affect on me. We started watching on Netflix, and because of the length of the first episode and my busy student schedule, stopped after the first episode, it was a rocky start, and I wasn’t quite invested yet, but I instantly knew a few things. The ‘ship was Audrey and Cooper. It was an absolute nostalgia trip. Anything that’s late eighties/ early nineties is a shoo in as far as my interests go. The next day we picked back up, watched two more episodes. When we made it to Season 1 Episode 3, “Cooper’s Dream”, I had to pause the show, and search the particular scene from Scooby Doo. I was utterly mind blown and ridiculously excited.

I was hooked. Badly.

Unable to wait, and with a less than stellar sleep schedule, I started watching it on my own time without telling her, and…not on Netflix, we’ll just say. So instead of watching each episode once, I had the unlikely advantage of having two watch-through’s for the price of one. Every night I left her dorm and went back to mine, and watched anywhere in the realm of 3 to 4 episodes more a night. Then, the next day, I’d join her again and re-watch them, because I never told her that I had no patience and couldn’t wait. Once I made it to season two, I got into a spot of bother as a result of this viewing method. While by myself, and without Netflix, I managed to skip and episode entirely! Things got a bit confusing… I’d like to say I learned my lesson after that, but I didn’t. I finished the series by myself within approximately 3 days, and with her in about a week total.

After finishing, like most things I engage in, I was desperate for more content. I sped read through all the fanfiction I could get my hands on, discovered the tie in novels, read My Life My Tapes, and downloaded the sheet music. I found the ‘Black Lodge’ pseudo-Atari game and started playing…an act of futility.  I started looking for other Twin Peaks related 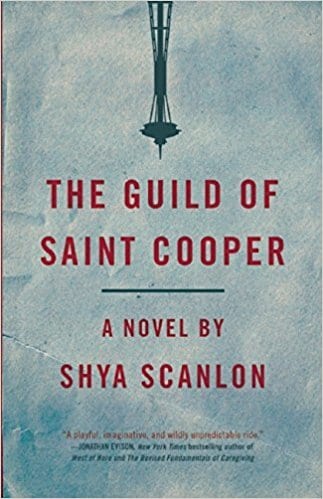 materials and bought my first item from Amazon – The Guild of Saint Cooper, by Shya Scanlon, a novel in which Dale Cooper is brought to life to save the world from ecological disaster. Very Lynchian.

In short, I obsessed obscenely.

About a month later we both had time enough to get together for a nice, quiet evening during which we intended to view Twin Peaks: Fire Walk With Me, which neither Elle nor I had yet watched. We even bought a bottle of Viniq, that sparkly purple vodka, for the occasion.  The evening was a disaster. We had two expectations going in: that we would enjoy the movie, and that we would get pleasantly drunk. Neither expectation came true. We both were disappointed, as the ex had falsely billed the movie as a sequel, when, indeed, she must have meant prequel. We did not, considering my German and her Latina background, respectively, manage to get even a mild buzz. My suggestion: Don’t buy Viniq, but DO watch FWWM, for, as a subsequent rewatch has taught me, it’s really a phenomenal movie. (Especially when you know it’s a prequel and not a sequel!)

Two nights after that disaster, low, and behold, Season 3 was announced. I am glad that I had the chance to view the original two seasons as a complete show, especially considering the finale, which is very firmly my favourite episode. The possibility of season three went back and forth for a while, as we all well know, but in the end, here we are. Just nineteen days away. As I can hardly believe it,  I can’t even begin to imagine how those who have been there from the beginning are feeling right now. The closer we get, the less real it seems, despite it’s imminent premiere.

I’m sure that, of the contributors on this blog, I am one of the newest members of the Peaksie legions. I did not watch when it was on originally (that would have been a feat from God, seeing as I wasn’t born yet! Wow!) and I didn’t know about it until recently, but it has still had an immense impact on my life both in the media I’ve since consumed, and in my greater endeavours. Since the announcement of Season Three, I have read The Secret History of Twin Peaks, watched Dune and Lost Highway, rewatched Twin Peaks and FWWM once, and, much to my personal satisfaction, beat the Atari Black Lodge game. Once. I’ve been a guest of a Twin Peaks podcast. I’ve written several successful fanfictions for Twin Peaks, something which I believed I would never be able to do, one piece of which has even been featured on another podcast that has been doing Twin Peaks episodes.

Last, but most certainly not least, I have met an absolutely irreplaceable friend as a result.

I like to think that I try to look at the world a bit differently, each and every day as a result of watching the show. Currently, I teach English Literature at a high school. Teenagers are certainly a breed apart, but their lives are as complex as any adults. Unfortunately, so many of those problems portrayed on Twin Peaks are real life for my students. If I took one real world application from my viewing, it is to never, ever ignore my kids problems. None of my students will be Laura if I can help it, or Bobby, or Audrey.

Twin Peaks is different from anything else that came before, and more original than anything that will come after, I’m sure. It’s an artistic expression worthy of the history books, and I am overjoyed that, even after all this time, I get to be a part of the strangeness, and the wonder. Season 3 is upon us. Welcome to those fans both old and new. We’re all being given the chance to Return.

I’ll see you in the trees.