An audio version of this article is now available on our Patreon https://www.patreon.com/25YL so sign up to become a 25YL supporter for as little as $3 a month, and you can access this and many more great audio articles.

Something’s off about DoppelCoop when he’s in the prison being interviewed by Gordon, Albert and Tammy, and it’s not just his down pitched voice. You could make an easy case that DoppelCoop is run down. You can make a case that the garmonbozia he threw up while he was behind the wheel in Part 3 could’ve taken the vim and vigor out of him temporarily. It could make him sloppy, repeating himself. You can make this case.

Or you can think about all the things that hide in plain sight in Twin Peaks and realize the easy answer can make way for something even more chilling if you’re just willing to put the things you fear most as options on the table. DoppelCoop was indeed beaten down by the accident, he indeed lost a ton of garmonbozia. But all that did was make his body ripe for the taking by the lodge spirit we saw in the mirror of Great Northern Room 315 with our own eyes. I think the DoppelCooper speaking to Gordon in South Dakota had BOB in the driver’s seat.

The genius of The Return’s story so far is still unknown to us, but the thing I see as its best strength so far is how it manages our expectations. We’ve spent three and a half Parts accepting the fact that BOB has not appeared and shows no sign of surfacing where we thought he would. BOB will not be the big bad of this new Twin Peaks anytime soon, we shouldn’t expect to see him in South Dakota especially. He flew the Coop, right? I’ve heard this all over podcasts and blogs from all sorts of people. But there is so much more Twin Peaks to be had, and I refuse to believe BOB’s down for the count. That demon stayed in my nightmares for a reason. He’s not going to go away just because Frank Silva did.

It may take me a minute to consider other explanations if they’re presented as reasonable, but I can spot BOB even when he’s expertly hiding in plain sight. For one thing, I hear he smells like scorched engine oil. It makes people sick if they smell it. Jacoby could spot it even when he was in a coma. Maddie could smell it in her aunt and uncle’s living room (she started coughing right away). The officers at the scene of DoppelCoop’s accident got sick immediately. And, long after the garmonbozia had been cleaned off DoppelCoop, Albert wasn’t feeling so well during the interview.

Now let’s circle back to that night, Maddie’s night. Because there’s another part of this to think about. BOB chases Maddie. He’s ready to kill her, but from time to time things quiet down and Leland Palmer seems to appear in his own face. Leland asserts control over his body. He cries. He holds Maddie close and tries to dance with her as if she’s Laura. Then BOB reasserts control and things get intense again, but only for a while before Leland surfaces again. It’s a battle of wills. But then there’s a white light and Leland is never seen again until BOB’s drenched by fire sprinklers and leaves Leland’s body in a jail cell. What I’ve just described is BOB having a known history of being able to assert control over a weaker personality. And I don’t think DoppelCoop was a weaker personality (as it seems neither BOB nor Cooper had a chance to coexist in the body as Leland’s situation appeared to be) but what an opportunity to have that personality knocked out by tumbling through a car crash after vomiting its life stuff. BOB knows a gift when he sees one.

Back to his Leland days, we see BOB during the daytime. We see him pull random fur off a stuffed white fox in Ben Horne’s office when he should be listening to Ben. We see him acting stiltedly with Donna as he thinks about killing her right there. And we see Bob, chewing gum. Look at how unnaturally he does this. You can probably already remember. Then tell me you don’t see similar body mannerisms in any of the thumbs-ups he gives to Gordon. 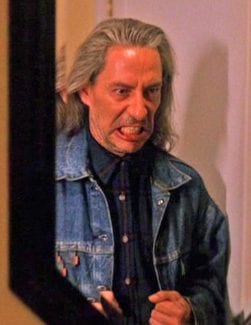 And about his triple-greeting of Cole (“It’s yrev very good to see you again old friend,” “I haven’t seen you in a long long time,” and “Gordon I’ve really really missed spending time together,”) these hollow starter phrases and lack of conversational flow make me feel like this Cooper doppelgänger is acknowledging those around him about as much as that one time when he kept repeating “I want to brush my teeth.”

I think we have BOB back, right where we expected him, but only after we stopped expecting him there. I reserve the right to be wrong about this (and half expect to be proven wrong in the first five minutes of Part 5) but my gut says to pay attention to this line of thought. Think I’m on to something?

click here for my first look into this group dynamic, and here’s part three

and for another angle on this, check out this excellent article from Jordan Chambers at Twin Peaks Gazette.