While I was finalizing my Parts 3 and 4 analysis, Playing the Lottery of Life from my “Homeward Bound” column, I really started thinking more closely about the implications of the lapel pin switcheroo that’s been happening throughout the first four parts. What follows is my working theory on how the lapel pins will be essential to understanding timelines in The Return.

In my Part 1 and 2 analysis, The Path Out of the Black Lodge, I mentioned my belief that the Red Room scenes and the Black and White scene might be out of order. I still stand by that, but with a little more sense to back it up.

My latest theory is that the Black and White Room scene either happens after the events of Part 4, or during Dale’s time in the casino. I believe this for several reasons. Firstly, Dale is without his lapel pin in the Black and White Room (pictured above), as well as after re-entering our dimension. The presence of the lapel pin could be indicative of when something is happening.

It was recently brought to my attention that on one of the TWIN PEAKS subreddits, they identified the sounds being played on the gramophone as the slowed down audio of a slot machine pull. Considering Dale’s, err, state of mind it would be an interesting concept to fathom. What if, while Dale is shuffling around the casino, his ‘mental self projection’ is actually visiting the Black and White room with ???????/the Giant? Because of whatever strange dimension Dale’s been in, it would make sense that he could function properly in a space similar to that, while still being wholly inept in the real world, like he’s not currently calibrated properly for our plane of existence.

We also know for certain that he was receiving help from the Red Room in the form of it’s little icons, popping up above the correct slot machines, as well as the sequence in Dougie’s bedroom where Phillip Gerard reaches out to Dale from the Red Room. So is it too much of a stretch to imagine that this could be the case, especially if it’s true that the sound is that of a slot machine pull?

This is not me suggesting that the entire Black and White sequence with ???????/ The Giant is happening at that time. Instead, I’m also inclined to believe that this is really many scenes across a varied amount of time, spliced together. This is especially considering the way the scene was cut, flipping the camera back and forth between ???????/The Giant and Dale. If this is indeed the case, we would then be able to match up the clues given to Dale in that sequence with later sequences in the show, not only as correlating, but as being linearly inclined.

As to the switch of lapel pins, I’m not sure it related to time so much as to something else, 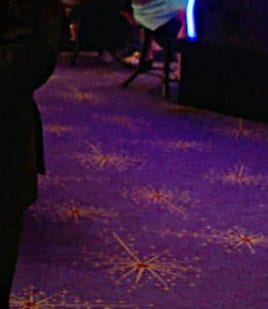 considering that the change happens when Dale sees Major Briggs’ ghostly floating head and hears him say “Blue Rose”. That, I think, is a different concept altogether, the starburst perhaps relating to light, intuition, or revelations. (The carpet pattern in the casino is a gold starburst with a red center on a purple background.)

In Part 5, I will be keeping a close watch on Dale’s lapel (if he ends up back in his black suit at all, much less the episode!) to note if a pin shows up randomly again, or if ever. Either way, the differences and actual visibility, or prominence in actual film presence, of the lapel pins is significant in some way. That I’m absolutely sure of. So whether any of this is remotely accurate or not, the evidence is present that it’s something for which we ought to be on the lookout. It could very well be as integral to our understanding of timeline (or even universe) in terms of plot progress as actual dates, if not more so.

Another thing to be on the lookout for, but that I haven’t delved into – apparently license plates might give away timeline details. It’s pretty clear that this show is not working in chronological order, or at least that the different plot threads are working at different speeds, so get your mind in the mood for a game of I spy, because we’re only just getting started, and I’m sure that it’s only going to get weirder and more confusing before we can begin to make the slightest modicum of sense of any of this at all.