Welcome back, dear reader.  So, we thought Part 6 was plot heavy?  Wow, this episode was packed with payoffs, and a few teasers towards future developments.  I’m going to be light on big theories this week, but we’ll have a hefty Speed Round at the end.  Let’s dig in.

Theory: Annie Blackburn does not exist.

Analysis: At long last, I can say this theory is *false*!  Whew, that feels great.

This theory, of course, stems from the Annie-shaped hole in the Secret History of Twin Peaks, but it has now been confirmed to not be true.  At least, not in *this* reality (more on that in a minute).  Deputy Hawk explains who she is the Frank Truman and that’s the end of it.  She exists.

Now, some to do has been made about the fact that Hawk says something to the effect that she’s “a girl who went into that place”, and doesn’t describe her relationship to Cooper or mention that she’s Norma’s sister.  Personally, I think that’s reading a bit too much into things.  To Hawk, she probably is just “a girl”, especially 25 years later.

Unfortunately, we still can’t put to bed the theory that she’s a “manufactured being” (or some other Lodge entity), but this was a good step in the right direction.

Theory: There are alternative timelines / realities at work here.

Analysis: We took some steps forward and backward this week in this arena.  First, let’s talk about the non-confirming evidence.  With the arrival of the Great Northern hotel key back in Twin Peaks, this would seem to finally put to bed and theories about the “Dougie Jones” storyline being set in 2003 while the rest of the show is set in 2015 (as we’ve discussed previously).  The Post Office is not *that* slow.  So we’ve hopefully made some progress, though expect the die-hards to hold out a few more parts.

While there might not be divergent timelines being shown to us, the involvement of some sort of time travel got a huge boost this week.  One of the biggest reveals this week was that, while the headless body in Buckhorn is indeed that of Garland Briggs, it’s of a Garland Briggs that hasn’t aged in 25 years.  Don’t forget though, his prints have shown up 15 other times in the last 25 years, so we’re not talking just a single leap even.  Briggs was already established as a bit of a time traveler back in Season 2, when he came back from the White Lodge wearing a WWII-era pilot outfit.

Now, if you were scratching your head about the final scene of Part 7 at the diner, what you may have missed is that the entire scene changed after Bing pops in and asks if anyone has seen Billy.  The staff is in different places and the entire crowd of extras has switched out.  Looking around, you can see the plant is in the same position on the counter and hasn’t grown or changed in any way.  There is apparently one less pastry on a shelf.  This could just be a time jump ahead (or back) an hour or so.  Or it could be something else.  I’ve also heard that Bing himself walks out of the diner at the very end of that scene, after all the credits have rolled.

There’s one more minor possibility that I only take semi-seriously.  We started out Part 7 with Jerry Horne calling brother Ben in a panic that he’s lost in the woods.  During their conversation, he says “You say the same thing” to Ben.  Could he be caught in a time loop?  Nah, probably not.

Theory: The “Dougie Jones” stuff is all a dream.

Analysis: I’m going to start out here by pointing you to another article on the 25 Years Later site, Dream a Little Dream of Me.  Lindsay and Eileen have done as excellent job of compiling all of the evidence, through Part 6, that supports the “Dream Theory”.  I can’t recommend it enough.

Here in Part 7, we didn’t get much of the Dougie-verse, but what we did get continued along in the same vein.  People continue to interpret Cooper-as-Dougie in the most generous ways imaginable.  When he mimics the “come here” hand gestures of his coworker, she assumes he wants her to bring the police to his office.  He fumbles his way through the police interview with a few copied words from Janey-E.  Just when a few folks recently have alluded to something being wrong and needing to take him to a doctor, in Part 7 that all goes away again and everything goes back to abnormal.

Of course, the craziest, most surreal moment of this Part came while Good Cooper was wrestling with Ike the Spike for control of the gun, and the Evolution of the Arm appears, yelling for him to “Squeeze his hand off!”  This was different than previous communications from Philip Gerard in the Red Room (most notably, no curtains), which leads me to believe it was the Arm’s Doppelganger, not the Arm.  But why would he be urging Good Cooper to do that?  Might it have something to do with the funny smell attributed to Ike in the later witness interviews?

On the side of disconfirming evidence for the Dream Theory, as previously mentioned, Ben Horne is given the key to Room 315 by his new assistant Beverly, having arrived in the mail that day.  As expected, the Great Northern went over to key cards 20+ years ago, which helps him date this back to the room where Agent Cooper was shot.  No further progress there, but he did pocket the key.  My prediction: he’ll hand it over to his daughter Audrey, remembering her infatuation with Cooper.  But the point is that, like Dougie’s wedding ring, here again we have an artifact from the “Dougie Jones” storyline that has appeared in the “real world”.  It can’t be just a dream if these things have real existence.  I’ll say though, I don’t think that interpretation builds on a firm understanding of David Lynch’s body of work.

Analysis: It was revealed by Doc Hayward that Bad Cooper went into ICU while he was at the hospital, and theories abound about him doing nefarious things to Audrey who was there in a coma after the bank vault explosion.  I could always be proved wrong, but I just don’t believe that’s where Frost and Lynch are taking us.  Lynch by himself?  Maybe.  But Lynch tempered by Frost?  Sorry, I just don’t buy it.

I think the more obvious answer would be that he was there to get the Owl Cave ring from Annie, who was likely also in the ICU at that time.  We saw, in the Missing Pieces, a nurse take the ring off Annie’s hand.  How about maybe that nurse was under BOB’s control?  This makes so much more sense to me.

Analysis: It goes without saying that something bad went down between Diane and Bad Cooper.  “I’ll always remember that night” he says.  Again, the internet has gone wild with theories abounding about Bad Cooper having raped Diane, and again, I just don’t buy it.  What she expresses to Gordon is that something is missing *in his heart*.  To me, that says that he betrayed her, not hurting her physically but rather emotionally.

What I envision goes more like this.  Bad Cooper returns to Philadelphia and confesses his love to Diane.  They have a night of wild passion, but he vanishes in the morning, never to contact her again.  Hurting someone so close to Good Cooper is just a bonus, because his real objective is to get ahold of Dale’s tapes to Diane.  Granted, this presumes that Bad Cooper doesn’t have all of Good Cooper’s memories, and thus he needs this information in order to play the role.  Those few who saw him around Twin Peaks have all commented that he acted strange and/or something was wrong about him.  As theories go, it may be a bit thin on supporting evidence, but when I re-watch their interaction, the things they say to each other make a lot more sense than they would through the lens of darker theories.

As always, please reply below with your own comments and corrections, or give me your own well thought out theory.  You can catch me on various Facebook groups, such as “Twin Peaks (2017)” or our own “25 Years Later” page, on the Reddit r/twinpeaks forum, or email me at catnapspirit@gmail.com.  See ya next week. 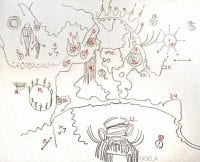