Welcome back to “The Waiting Room”, my weekly Monday night column where I discuss all of the happenings in the town of Twin Peaks, as well as track the movements of the one and only Mr C. Just a few side notes before we get to it: If you haven’t had a chance to check out my interview with John Thorne where we exchanged notes and theories for 60 minutes, please do. It was an enjoyable conversation and a personal highlight for me. If you haven’t heard me say this before, I’ll say it again: Without John Thorne and his work, I never would have started this site. Also last night I got a chance to interview Brad Dukes, author of Reflections: An Oral History of Twin Peaks. I’ll be transcribing that interview this week and should have it published within the next week. If you haven’t read “Reflections” you are doing yourself a huge disservice. In the final note about interviews here on the site, I was able to interview Harley Peyton (writer/ producer for Seasons 1 and 2 of Twin Peaks) in what was another amazing experience. Getting a chance to talk Twin Peaks with someone who wrote more episodes of the show than anyone besides Mark Frost was a bucket list moment. Definitely worth reading if you haven’t had a chance to yet. My Interview With Harley Peyton.

One of the big conversations I’ve seen on social media since Part 10 aired is about the pacing of the hour and also of the season so far. Here are my two cents on the matter: What we’re seeing right now has been described as an 18-hour film that we get weekly one hour instalments of. It’s not episodic television, the way the original series was. It’s also unlike every other film we’ve seen before because we were able to see Blue Velvet all in one sitting. The point I’m trying to make is that what Lynch and Frost are doing here has never been done before. We will be writing about and studying this format for years to come and you can damn sure believe that someone else will attempt to recreate what they’re doing here. I can’t sit here and tell you that the pacing is good or bad. I have nothing to compare it to. I can tell you if I enjoyed the hour of television or not. I can tell you if it met my previous excitement levels or not. Before I get off my soapbox, I want to say this. Nothing annoys me more than when people compare their level of Lynch or Twin Peaks fandom. Just because someone isn’t glowing over every detail doesn’t make them any less of a fan. It just means they’re processing this completely new way of telling a story Lynch and Frost are using. In fact, I’ll venture to say most of us will be processing this format for years. Let’s all enjoy this wonderful moment in time without judging the next person’s fandom. That’s not what Twin Peaks and art are all about. End of rant.

So how about that Horne family? We’ve got Jerry, still stuck in the woods with no cell service, we’ve got poor Johnny tied to a chair hanging out with the world’s creepiest talking bear, Sylvia was choked, robbed and verbally assaulted by her less funny and whinier Bobby Peru of a grandson and then there’s Ben, seemingly humbled by life. Maybe it was partly the divorce, maybe its the shape his family is in, maybe its guilt from his past actions but Ben doesn’t have the swagger he used to. I don’t know if I will call him a changed man but it does seem that life has caught up to him in certain ways. That really seems to be the case with the entire family. Which begs the question: what will Audrey be like when we finally see her? Will the emotional scars of her past, having a son like Dick Horne and all of her family baggage have taken a toll on her? Will there be physical repercussions from the explosion at the bank 25 years ago? I’m not expecting to see an older version of the Audrey we knew from the original series. I am fully prepared to see Audrey impacted somehow from life, just like the rest of her family. Time has not been kind to Twin Peaks version of the Kennedys.

Back to Dick Horne. Young Richard has become one of the show’s top antagonists and for good reason. He started Part 10 off by killing the sole witness that could connect him to the hit and run murder of that child and then used his inside man at the police station to make sure her words connecting him to the crime wouldn’t haunt him from her grave. That plan, however, may be foiled by the deceptively sneaky Lucy, who in a nice callback to the pilot watched something unfold that will be helpful to the officers that she wasn’t supposed to see. Horne made plans to skip town but not before terrorizing, robbing, physically and mentally attacking his own grandmother in a scene that very much reminded me of Wild at Heart’s Bobby Peru. One can’t help but feel that Horne will not leave town but rather be a major part of the end game. Last week I stated a theory I had that Bob would inhabit Richard. Not ruling that out yet but Dick Horne is undoubtedly an evil character without Bob who is obviously capable of murder on his own. Could he take out one of our beloved characters leading to a showdown with the police before the year’s over? I think it’s likely. 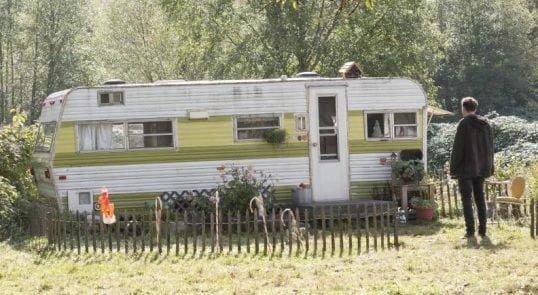 In one of the most powerful scenes of the evening, we saw the Log Lady once again on the phone with Hawk. This is purely speculation on my part, but I am still of the belief that this was prior to the conversations we saw them have in Parts 1 and 2. I believe what we saw in Part 10 was part of the buildup for the great act Hawk will eventually do, with a little help from his friends as alluded to by the Log Lady last night. What I got out of that phone call was that she was talking about the Bookhouse Boys, what better way for Big Ed and James to be showcased than in what seems to be the hero’s mission: journeying to the entrance of the Lodge, like we saw Hawk do in Part 1/2. If I had to make a guess, either Hawk goes back with his friends, or they were right behind him when he saw the red curtains and they were just off camera. There’s something very exciting to me what the leaders of the town standing next to each other facing down an unknown evil and hopefully assisting Cooper in the process.

The Log Lady was who said, “Laura is the one”, and while I don’t understand how Laura will fit into the big picture yet, you know that she will. Maybe it’s her spirit, her memory and for the people of the town that lived there prior to her death its a chance to make amends to Laura for turning the other way when she was so desperately in trouble. I always think back to her funeral and how true Bobby’s words were when he laid blame on everyone for her death. Perhaps by conjuring up her memory, the town can do right this time both against the forces of evil and then against the drug pushers. Or maybe Laura’s involvement will be much more literal. Perhaps she will be walking and talking, seen by characters. How she factors in is anyone’s guess but we do know she will. Laura is the one. 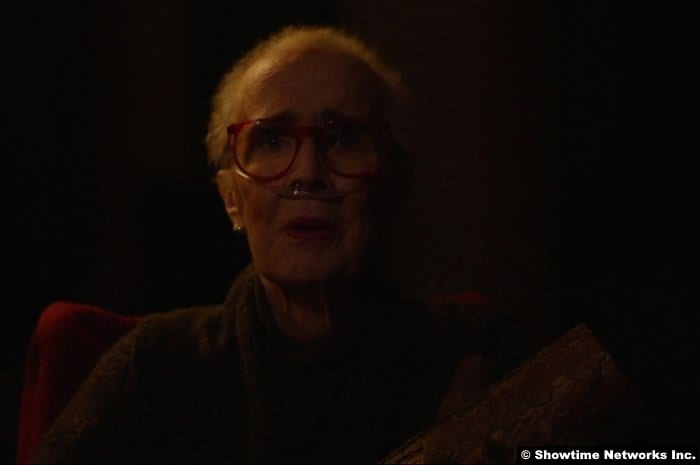 I could have watched Carl Rodd play guitar all hour long. Is he getting booked at the Roadhouse anytime soon? Unfortunately, an act of domestic abuse broke up the musical interlude. In a scene that brought visions of Leo Johnson to everyone’s head, we watched Steven rough up and berate Becky, his wife and Shelly’s daughter. While I’m personally hoping Shelly still has the same gun she once shot Leo with and tells her daughter to do what she needs to do, the narrative is unclear. Is this subplot playing into the larger Red/Dick Horne drug ring storyline? Is it a commentary on cycles of family dynamics and abuse?  Or is it world building, showing that despite all the time that has passed, some things stay the same and even when the final credits roll that these stories live on? 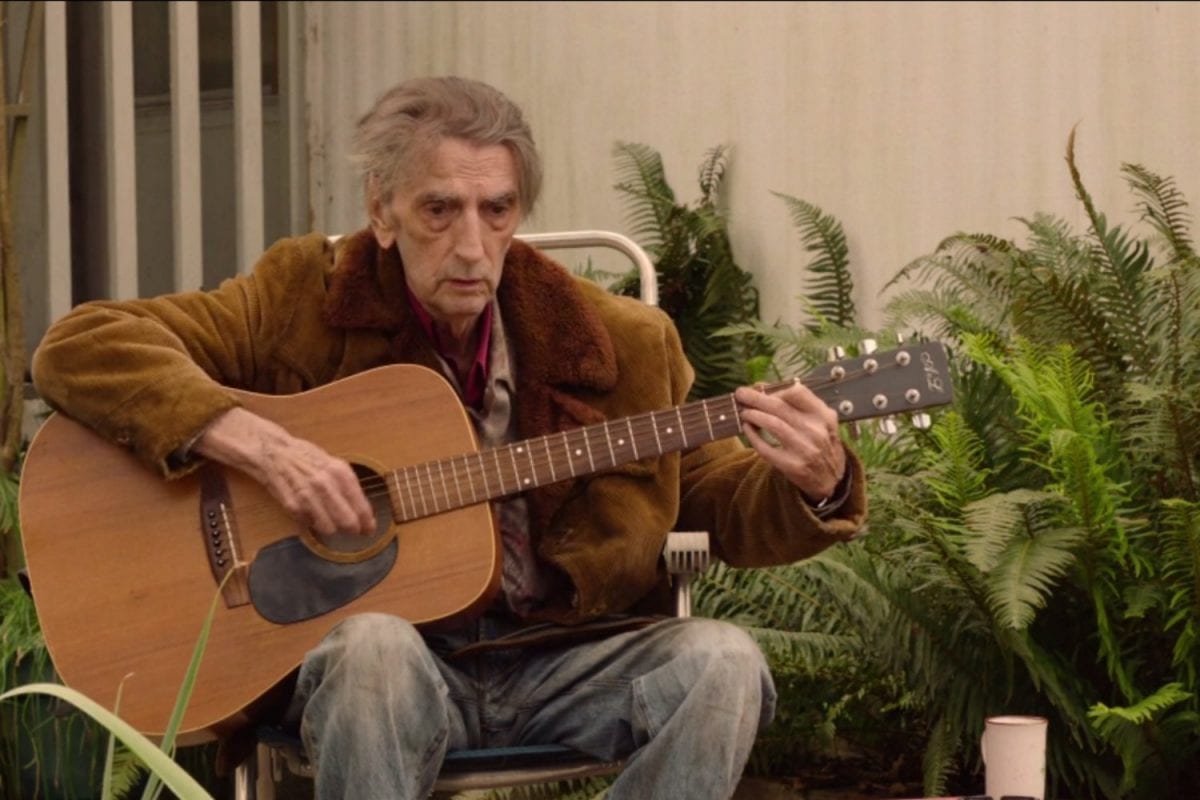 Seeing how much Nadine loves Dr Jacoby makes me smile. I can’t help it. Maybe it’s because I’ve always had a soft spot for Nadine and even though I think Jacoby is exploiting people for money (which should come as no surprise) Nadine seems to be in a good place. With her dream business to boot! I’m not sure how much more development either of those characters will get but if this is it, I’m ok with it. These moments are great spent with familiar faces.

Mr C was on the bench for Part 10 except through mentions and pictures. Agent Preston showed Albert and Gordon a picture of Mr C at the Glass Box in NYC, making it certainly seem like he’s the mysterious billionaire. The Mr C and Diane relationship is now on the FBI’s radar. The question now, in my opinion at least, is Diane on Team Mr C or is she on a Lady Vengeance like quest for revenge? We shall see…

That’ll do it for me tonight. Be sure to check out Eileen’s latest “Homeward Bound” as she dives deep into all things Dougie tomorrow and then Wednesday Laura is back with “Who Killed Ruth Davenport?” where she will be taking a look at the FBI and more. As always thanks for all your support and until next time, I’ll see you in the trees…