In the Log Lady intro1 for the Season 1 pilot ends, Margaret first introduces herself, and then talks bit of stories and mysteries.  She ends that first introduction with the following:

“To introduce this story, let me just say it encompasses the all – it is beyond the ‘fire’, though few would know that meaning.  It is a story of many, but begins with one – and I knew her.  The one leading to the many is Laura Palmer.  Laura is the one.”

Season 1 starts out with the one, Laura, and the mystery of “Who killed Laura Palmer?”  But by the end of that first season, we learned that there wasn’t really just one Laura, there were two.  Laura led a double life, manifest through her two diaries.  She even had a twin of sorts, in her cousin Maddy, who looked the same but was different on the inside.  As the Log Lady intimated, the investigation into Laura’s duality revealed that everyone in the town of Twin Peaks seemed to be leading double (at least) lives.  After all, even the name, Twin Peaks, implies duality.

Season 2 continues to press with the themes of duality and twinning, as the mythology of the Black and White Lodges is flushed out by Hawk, Major Briggs and Windom Earle.  In the Log Lady intro to that final episode of the original series, Margaret says:

“And now, an ending.  Where there was once one, there are now two.  Or were there always two?  What is a reflection? A chance to see two? When there are chances for reflections, there can always be two – or more. Only when we are everywhere will there be just one.”

The original series ends with a physical manifestation of the duality it explored, as Agent Cooper is literally split into two characters: the “Good Dale”, who remains trapped in the Black Lodge, and his doppelgänger, who is loosed upon the “real” world in his place.

Now, in Season 3, we are starting to see a theme of threes creep into the narrative.  Some of this is probably just Lynch and Frost having a little fun with using threes in Season 3.  In New York, Sam is alerted to “Camera 3” needing its memory card replaced.  In the Mauve Zone2, Naido redirects Good Cooper to outlet 3.  The photograph of Bad Cooper at the Glass Box is labeled “003”.  We even have three main story lines, playing out in Buckhorn, Las Vegas and Twin Peaks.

Perhaps more serious though are the names spoken three times.  The Arm says “Bob, Bob, Bob!” right before sending Agent Cooper out of the Red Room.  Gordon laments “Albert, Albert, Albert” after he reveals he had given information to Jeffries that led to another agent’s death.  These names spoken three times seem to carry power with them, as if they are a type of magical invocation.  Philip Gerard also says “Don’t die” to Good Cooper three times, in the part of the same name.  Speaking of magical invocations, the nuclear test which may have punched a hole between worlds and let in a great evil, the epic centerpiece of Part 8, is called “Trinity”.

The new “triplet” characters introduced in the Las Vegas storyline are another bit of fun with threes.  First we get the three cocktail waitress clad wall flowers, Sandie, Mandie and Candie.  In Part 5, they file in with the Mitchum brothers and play bored, silent observers to the violence of their bosses “firing” the poor floor supervisor who let Dougie Jones walk away with $425,000.  They apparently stick with the brothers day and night, running errands, mixing cocktails, and contributing to the overall aesthetic.

In Part 6, we are introduced to the Detectives Fusco, investigating the various attempts on the life of Dougie Jones.  These guys do not even warrant first names, being called out in the credits as T. Fusco, D. Fusco and “Smiley”.  The relation between these guys may be familial (brothers or cousins perhaps3), or it could be entirely coincidental.  We’ll probably never know.  In both cases, the three largely act as one, like a 3-headed monster, but we are also given moments where one member of the trio steps out and has a little bit of individual character development (D. Fusco’s $239 taillight and Candie’s fly swatting fiasco).

Of course, the real triplet character of Season 3 is Dale Cooper.  In Part 3, we find out that the doppelgänger has turned their two into three.  The Good, the Bad, and the Dougie, as the meme goes.  The physical Dougie Jones is scrapped almost immediately after his introduction, but the implications of this third Cooper instantiation continues to live on past the halfway mark of the season, much to the chagrin of the fans.  We didn’t spend much time with the real Dougie Jones, but from what we have learned since, he may have suffered from a bit of a Multiplicity4 effect, where the copy of a copy doesn’t come out quite as sharp as the original.  He was overweight, out of shape, cheated on his wife, and had addictions to at least alcohol and gambling.  He’s not the uninhibited, pure evil of Bad Cooper.  He’s just kind of a generally bad human being.

Good Cooper, in Dougie’s shoes (literally), has been “fixing” his clone’s life with the help of Philip Gerard and the Arm.  They paid off Dougie’s gambling debt, exposed some wrong doings at his work, and repaired his marriage to Janey-E.  She and Sonny Jim are the family Agent Cooper was prevented from having because of being trapped in the Black Lodge for the past 25 years.  A family unit of three – father, mother and son.  When Good Cooper regains himself, we’ll see if they somehow stay three or become two (or even less).

Cooper’s journey in Season 3 may also be leading to a different type of “three”, the third option5.  When Philip Gerard first explained to Good Cooper that he had been tricked, he mandated “one of you must die”.  Agent Cooper has now been set upon a path that only has two possible resolutions, Good Cooper dies or Bad Cooper dies.  But is that true?  In the comments to an article titled “Twin Peaks: Fire Walk with Me & David Lynch’s Duality”6, Joel Bocko writes:

“I think there’s also a sort of third level to what Lynch is exploring – the darkness, yes, the chaotic energies beneath that, yes, but also beneath that a greater unity that contains the above levels. It’s a very Hindu concept which makes sense, given Lynch’s own spiritual beliefs.”

It’s not about good defeating evil, or evil defeating good.  It’s about finding a balance where both good and evil coexist in unity.  The two need to become one again.  Twin Peaks has always acknowledged the duality present in every person.

In this same fashion, Season 3 adds a new level to the mythological duality of the Black and White Lodges: the Mauve Zone.  So far, the Mauve Zone seems to consist of a building or set of buildings, set upon a rocky outcropping surrounded by an ocean.  The multi-outlet power station of Naido and American Girl is a part, routing Good Cooper on his journey out of the Red Room back to the “real” world.  The monitoring station of the Fireman7 and Señorita Dido is another part, where they monitor the activity of humans, Woodsman, and other evil entities, and perhaps inject a little bit of good back into world to restore the balance.

With this third level now, the mythological realms bear some resemblance to the id, ego and superego model of human psychology8.  The Black Lodge is the id, the “primitive and instinctual part of the mind that contains sexual and aggressive drives and hidden memories”.  The White Lodge is the super-ego, which “operates as a moral conscience”.  The Mauve Zone is the ego, the “realistic part that mediates between the desires of the id and the super-ego”.  In a popular metaphor for Freud’s trisected psyche, the id is the devil on one shoulder, the superego is the angel on the other shoulder, and the ego is the person mediating in between. 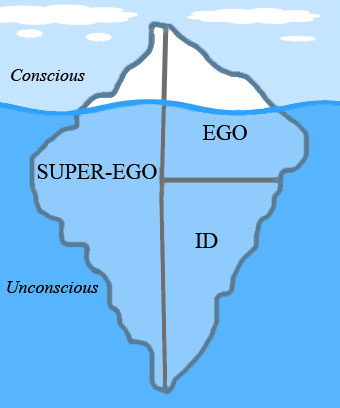 In another popular metaphor, the three are portrayed as an iceberg floating in a sea of consciousness, with the above water (conscious) portion being largely comprised of the ego (with some portion of the superego).  Not unlike a rocky outcropping surrounded by a purple ocean.  Consider this quote from David Lynch’s Strange And Unproductive Thinking (2011) 9,10:

“Specifically, the areas concerning the new futuristic thinking have to do with several abstract, somewhat hidden, emotional tendencies which lead one to believe that the consequences of interaction between the positive and negative forces are producing a vital link between the subconscious and super conscious minds, which therefore can only be considered as actual structures with two separate and distinctly different qualities”

Themes of threes have crept up in quite a few places during this third season of Twin Peaks.  As we move past the halfway mark, the Log Lady tells Hawk “the circle is almost complete.”  We will be returning to the “one”, in both the resolution of Cooper’s journey back to unification and a pending return to Laura’s story.  But in the meantime, we can have a bit more fun with threes.  If you know of any other “three” that I missed, please leave a comment below and share with everyone else.