Twin Peaks is known for its strange amalgamation of absurdity, melodrama, and surrealism. David Lynch and Mark Frost walk the delicate tightrope of this combination with a joyful and brazen recklessness, never shying from the sheer audacity of their vision. Lynch and Frost don’t bend sticks until they almost break; rather, they begin by deliberately breaking as many sticks over their knees as they possibly can and then revel in their own audacity. Against all odds, this approach actually works for Twin Peaks, week after week and year after year. The promise of reckless audacity in Twin Peaks, in fact, is one of the show’s trademarks, and it has proven to be enough to tide over eager audiences (and win new ones) during the intervening 27 years that separate the original series and Twin Peaks: The Return.

But what happens when Twin Peaks veers from its “formula” (is there such a thing in Twin Peaks?) in order to offer up straightforward moments of dramatic social commentary? I’m thinking specifically of the sequence in Part 11 when a Double-R Diner conversation among Deputy Bobby Briggs (Dana Ashbrook), Shelly (Mädchen Amick), and Becky Burnett (Amanda Seyfried) is interrupted by a stray gunshot through the restaurant’s window. Bobby, off-duty but armed, rushes outside, cautiously, to investigate. In the street, he finds traffic backed up behind a minivan, its side door open. There, a woman stands holding a revolver as if it’s a greasy dead mouse. She screams at a bearded man in a cap and camouflage hunting jacket (presumably her husband) standing on the other side of the minivan. She asks, screaming, why he had a put gun in the back of the van where their son could find it and shoot it. She emphasizes this point with blood-curdling cry: “What is wrong with you?!” In response, the man only looks away, apathetic. Bobby approaches, his gun drawn, asks the woman to surrender the revolver, empties it of bullets, and then asks for identification from both the man and woman.

Back up arrives, and Bobby then looks at the child who had accidentally (?) fired the gun through the Double-R window. Also wearing a camouflage cap and jacket, the eight- or nine-year-old boy, a spitting image of the presumed father, leans against the side door of the minivan, unphased—even defiant—as Bobby stares at the child in dismay. Bobby seems to marvel that the boy is unaffected by his own deed, and turns his eyes from the boy to his probable father, whose attitude and stance seem equally dismissive (indicated by a slow-motion shot of the bearded man shifting his weight and turning slightly. Bobby’s thoughts are unmistakable, a curious combination of “Like father, like son” and “What have we, as a society, become?” Other events take place later in the scene, of course—odd happenings and behaviors that return the sequence to more “traditional” Twin Peaks territory (whatever that means). But from the moment the bullet comes through the window of the Double-R to when Bobby looks at the bearded man, we can’t help but feel we’ve stumbled into another series—something more akin to Frost’s hard-bitten police drama, Hill Street Blues (1981-87), than to Frost and Lynch’s quirky and uncanny nighttime soap opera, Twin Peaks. The larger moral lesson on display seems to be that America’s obsession with guns endangers all of us, especially when that obsession is passed down irresponsibly, from father to son, as an assumed rite of masculinity. 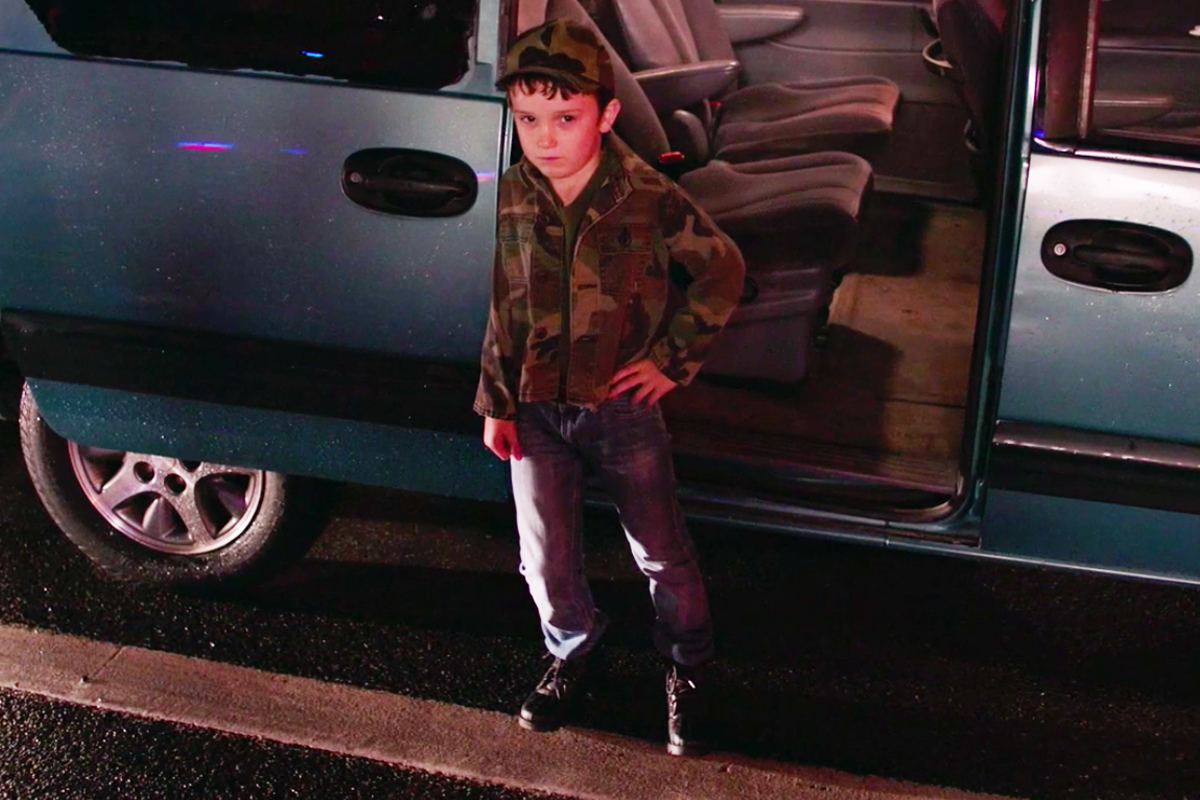 My purpose here isn’t to debate the merits or flaws of gun control or the symbolic nature of guns in our national consciousness. Instead, I’m interested in what Frost and Lynch expect us to do with these few moments that seem to take us out of the world of Twin Peaks and into the world as we know it in our own everyday lives. As always, a larger context for these events may emerge later in the series to help us understand how they fit into the epic narrative of Twin Peaks. But what are we to make now of Bobby’s reaction to the disturbing apathy of the boy and the bearded man—the unsettling seconds Lynch devotes to Bobby’s disbelief at the kinds of cultural attitudes these two people display? And are do such scenes “work” for a series like Twin Peaks?

Certainly, the moral point of the scene (or of this part of the scene, anyway) is driven home effectively by Dana Ashbrook’s superb performance and by shots and editing that favor Bobby’s distress at what he sees. We witness this near catastrophe through Bobby’s moral lens (one that is considerably changed from when we saw him in the early 1990s), and that moral point of view lends Bobby’s sense of shock and sadness to us. We, too, can’t help but feel shocked by the scene that has played out in front of Bobby.

The moral message—i.e., that irresponsible gun ownership is bad—seems much more in tune with Frost’s view of the world than with Lynch’s, particularly given the fact that Frost is known to be more politically engaged than Lynch, both on Twitter and elsewhere. But then again, Lynch is no stranger to tackling larger-than-life moral issues, as both the original series and Twin Peaks: Fire Walk With Me (1992, a film that did not involve a collaboration with Frost) reveal through their frank and horrific looks at rape, incest, and murder. The difference between Frost and Lynch here seems to be that Frost hopes political change will bring about moral rectitude, while Lynch hopes that a larger and more ethereal sense of good and evil—a sense that exists beyond the strictures of time and space—will somehow guide our actions in a world otherwise gone mad.

In either case, the quirky and freakish attributes of Twin Peaks (in all its forms) are not meant to overshadow or trivialize moments of real and recognizable violence from our own world; rather, the strange characteristics of Twin Peaks are meant to foreground and underscore our more realistic and ever-present tragedies, all the while providing a kind of temporary relief from those terrors through both humor and surrealism. During World War I, many artists in both Europe and America turned to an artistic technique known as Dadaism, which is to say, they sought to create deliberately meaningless works of art as ways of commenting on the meaningless and horrific bloodshed of a world at war over “thin red lines” (small lines on military maps that indicated how many mere yards the front had advanced or retreated each day). Could it be that Lynch and Frost seek to surround potentially catastrophic scenes (such as this gunshot sequence from Part 11)—scenes familiar to us from everyday news headlines—with ridiculous and incomprehensible “Dada-esque” moments that comment on the absurdity and insanity of our everyday lives?