This article is now available in Audio for all our Patreon $3+ supporters! So check out the link and listen wherever you are. Thank you for your support! https://www.patreon.com/25YL

Richard Horne is utterly reprehensible, disgusting, a sociopath, and that’s just what everyone else has been saying about him. Me, I’d rather not need to think about him at all, but Endgame Podcasts has a running character chart that has Richard Horne being the second-most connected character in whole show after DoppelCooper, so that tells me there has to be a reason for Richard Horne. Unfortunately this means everything involving him is worth paying attention to. Even his car.

That beater of a car is made from at least two different cars; a green one, and a red one. I’ve been alerted to watching for colors thanks especially to the crew at Wrapped In Podcast. They’ve been particularly cognizant of reds and greens since the traffic light reappeared. I think they’re right that red (much like scorched engine oil used to) signifies a negative connotation, while the new positive connotation (in the grand tradition of coffee) is the color green.

There are a ton of color examples to illustrate this point and I’ll use Part 11’s limo trip from Vegas to the desert. When Dougie was surrounded by the red imagery of Vegas the Mitchums were convinced they were going to kill him, and when he drove out to the desert, where green imagery was much more prevalent, the Mitchums decided instead to take Dougie out for dinner.

Richard Horne is in the green part of the car, but I think all that means is the story is going through him, or he’s where he’s supposed to be, which is right in the middle of all the destruction his rage can’t help but embody.

Also pertinent show coding is how the car Richard Horne is driving happens to be a Saturn. As DoppelCooper was driving a Lincoln before his garmonbozia-hemorrhaging car crash and we see a Lincoln-style woodsman later (thanks to EW’s A Twin Peaks Podcast for that connection), I’m going to say that Richard Horne’s car being a Saturn means something as well.

We’ve seen Saturn come up a lot already, even in the Black Lodge’s Waiting Room in the form of a lamp. In alchemy terms (thanks to our own Gisela Fleisher’s wonderful article), Saturn could mean “Harvest, intense focus, transformation of old into new, prima materia”, and later she associates Saturn with death. The Saturn symbol is also on the Owl Cave map, right next to the circle of syacamores, the same grove that operates as the Lodge’s front door. So by way of his car, Richard Horne is being associated with the Waiting Room (and therefore what most people assume is the Black Lodge), the darkest part of the transformation from old to new, and possibly death.

Back to Wrapped In Podcast, Jeff Fallis brought up something in their coverage of Part 11 that was unrelated to Richard’s car, but was exactly related to alchemy. A portion of alchemical process before becoming a gold alchemical soul is Nigredo, or blackness, which is heavily associated with and ruled over by, surprise surprise, Saturn.

In alchemy, Nigredo means putrefaction and decomposition. By the penetration of the external fire, the inner fire is activated and the matter starts to putrefy. The body is reduced to its primal matter from which it originally arose. Per Antoine-Joseph Pernety:

Putrefaction is so effective that it destroys the old nature and form of the rotting bodies; it transmutes them into a new state of being to give them a totally new fruit. Everything that has lived, dies; everything that is dead putrefies and finds a new life.

Nigredo has also signified the difficulties man needs to overcome on his journey through the underworld, which could signify what Richard is doing himself.

Is this what’s happening to Richard Horne? Is he the embodiment of hitting absolute rock bottom before he is able to rebuild? I don’t believe he can be redeemed myself, but he may be a symbol of this stage of alchemy for Twin Peaks itself. Richard Horne may be a symbol of the underworld, the place of shadows, monsters and demons. He may be the symbol that Twin Peaks needs to overcome as it goes through its own underworld period. It may need to be razed in Horne’s wake before the town is able to rebuild and achieve its fully realized alchemical state.

And he could also be a symbol for Dale Cooper’s journey. Richard Horne may symbolize (especially if he is the son of Dale Cooper’s doppelganger) a part of Cooper’s own process of becoming a fully realized soul and he needs to get beyond Horne’s representation of Saturn’s death before Cooper can ascend like Garland Briggs.

Why do I think Richard Horne is part of Cooper’s alchemical journey rather than Horne’s own redemptive arc? Because in the first place I don’t think you can come back from the things he has done thusfar, be that disgusting in the eyes of viewers, and come back from it in seven Parts (And if he’s going through any kind of transformative journey, he’s another Leland being primed to become BOB’s new flophouse). 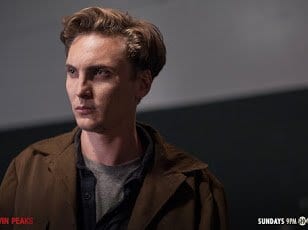 Returning to Horne’s car, it may hold one final clue for Horne’s fate, hidden in its exact colors. It has a red passenger side quarter panel, red rear driver side door (bottom quarter only). Everything else is green except for a few notable bits up front. Does it have yellow or gold panels up there to represent the fully realized alchemical soul? No. It has one white side panel over the front passenger side wheel well. And there are no front hubcaps, nor is there a front bumper.

From the back, the car’s color scheme literally goes from red, to green, to white, to literally an absence. Just like I hope happens to Richard Horne before this show is over, preferably at the hands of someone properly knightly.