Relationships are difficult in the world of Twin Peaks.  It doesn’t matter how in love a couple is, or how deep their passion, because chances are that the romance is doomed from the start.  Love triangles, infidelity, blackmail, abuse, drugs, incarceration, and insanity are just a few of the many hurdles a relationship may face and there is never any chance for a happy ending.

There are a handful of couples (or trios, or quartets) in Twin Peaks who love each other mutually and unconditionally.  They are there for each other in times of need, they have each other’s backs regardless of what they are up against, and they are fully committed to each other until death do them part.  There is nothing stronger than the bond of brotherhood, and if any fan wants to ‘ship a true love story their best bet is to go for one of a fraternal bond. 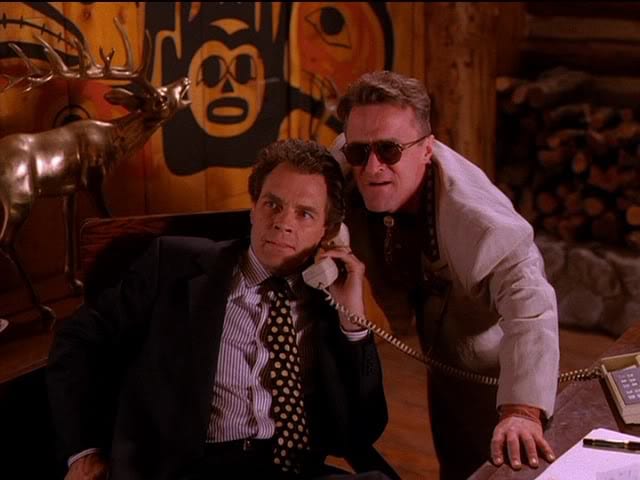 Ben and Jerry—Their names say it all.  Whether they are bickering like a silly team of cat and mouse or putting their heads together to conglomerate on how to make millions like a couple of ice cream tycoons, Ben and Jerry are one of TV’s cutest odd couples.  When Jerry is traveling Europe and experiences one of the most divine sandwiches ever made, he selflessly gets an extra to share the beautiful experience with his dear big brother at home.  When Ben gets arrested for the murder of Laura Palmer and has a very weak case to prove his innocence, does he call in one of the best and most expensive lawyers he can afford?  No, he calls in his devoted little brother Jerry.  And years later, when Jerry gets lost in the woods after potentially a few too many tokes to smoke and edibles to eat and drops of acid and bags of shrooms and general encounters with evil, who does he call?  911?  Search and rescue?  No, he calls the one man he loves and trusts more than anyone in the world: his big brother Ben. 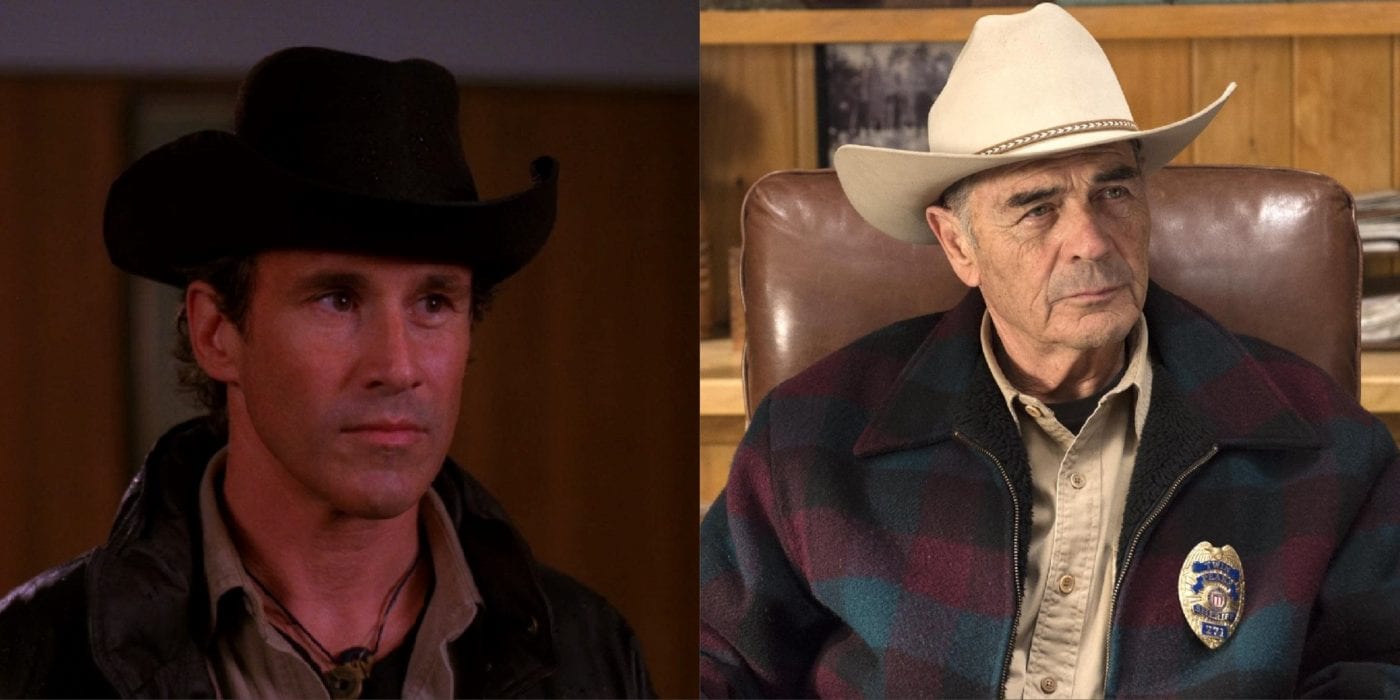 One might think it impossible to develop chemistry between two characters that have never shared any screen time, particularly when we weren’t made aware of one brother’s existence until long after we lost touch with the original sheriff.  But Robert Forster as Frank has done an expert job at bridging the gap between the True Men with his soft, sad way of speaking to his brother on the phone and assuring Ben Horne that they keep in touch.  It is almost as if Harry is present for The Return, although never seen nor heard.  It is heartbreaking that we don’t get the chance to see the two of them on screen together, as I can only imagine how fantastic their chemistry would be to witness. 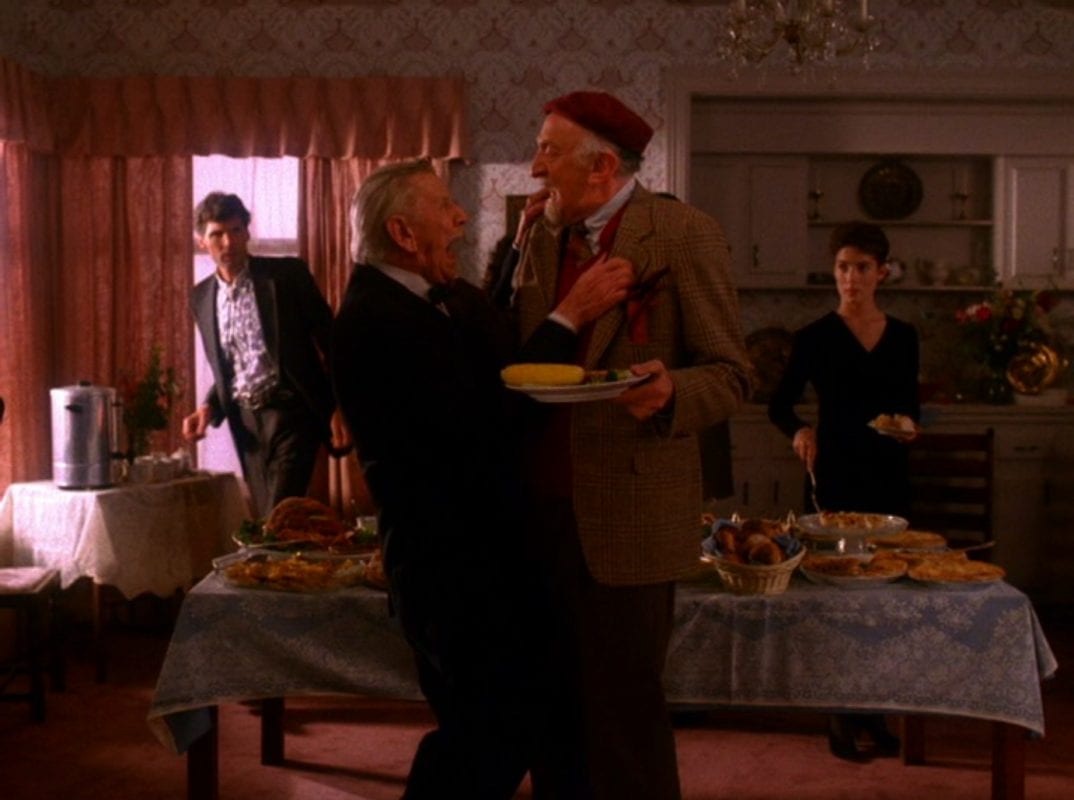 Dougie and Dwayne love each other so much that they can hardly stand it.  In the constant battle to impress each other their relationship gets skewed by competition and one-upmanship.  Who can be richer?  Who can be more powerful?  Dwayne can’t stand to see his brother get manipulated by a gold-digger and Dougie can’t see past his garden hose that his brother only holds his best interest at heart.  Their relationship is so impassioned that Dwayne sees blood when Lana kills Dougie with sex.  Like any romantic hero, he marches into the sheriff’s office with a riffle in an attempt to avenge his brother’s death.  True, he ends up falling for his brother’s wife in an instant and quickly ceases to grieve for his beloved Dougie, but we can easily blame that on the witchcraft of the sexual Howitzer.

Jean, Jacques, Bernard, and Jean-Michel make up one of the seediest bloodlines to set foot in the town of Twin Peaks.  Like the Truman Bros., you never see any two siblings in the same place at the same time, but that doesn’t make their fraternal loyalty to each other any less apparent.  Following in their father’s footsteps, they each have a hand in trafficking contraband between Canada and Twin Peaks, whether it be gambling money, prostitutes, or drugs.  They make a living off of the evil that resides in Twin Peaks and feed off desperate high school children, but not without consequence.  After Bernard is killed by Leo Johnson and Jacques is smothered to death by Leland and/or Bob, the eldest brother Jean is left to get his enact revenge against Cooper, who is the scapegoat for his brothers’ untimely demises.  Of course, as suave and smooth-talking Jean is, he still cannot compete against the main character and loses his life in a gun battle against the FBI.  But wait, there’s more!  Because the scum of the earth is so difficult to scrub away, a long-lost identical twin to Jacques has shown up for The Return to carry on his family’s legacy.  It is interesting to note, however, that Jean, Jacques, and Bernard all have such vastly different appearances and accents, whereas Jacques and Jean-Michel are so similar it is almost as if they are the same person.  Very curious, indeed!

True, the Mitchum Bros. do not reside in the quaint town of Twin Peaks, but that doesn’t make them immune to having one of the most adorable relationships of any two characters in the show.  Brought up together in an orphanage, they have not let adulthood get in the way of everlasting love for each other.  Despite being millionaire casino owners and increasingly successful gangsters, they live under the same roof.  Despite residing in a large mansion, they eat their breakfast side-by-side, close enough to be knocking elbows, at two in the afternoon.  They giggle together and bicker with each other like a married couple that has been together for longer than they have been apart.  Even when they disagree with each other, they work it out by discussing their issues until they reach a common ground.  If it weren’t for their unlawful behaviors and their strange use of women as decorative objects it would be safe to say that they have one of the most enviable relationships seen on TV.  Like Romeo and Juliet, Ross and Rachel, or Homer and Marge, they are truly MFEO. 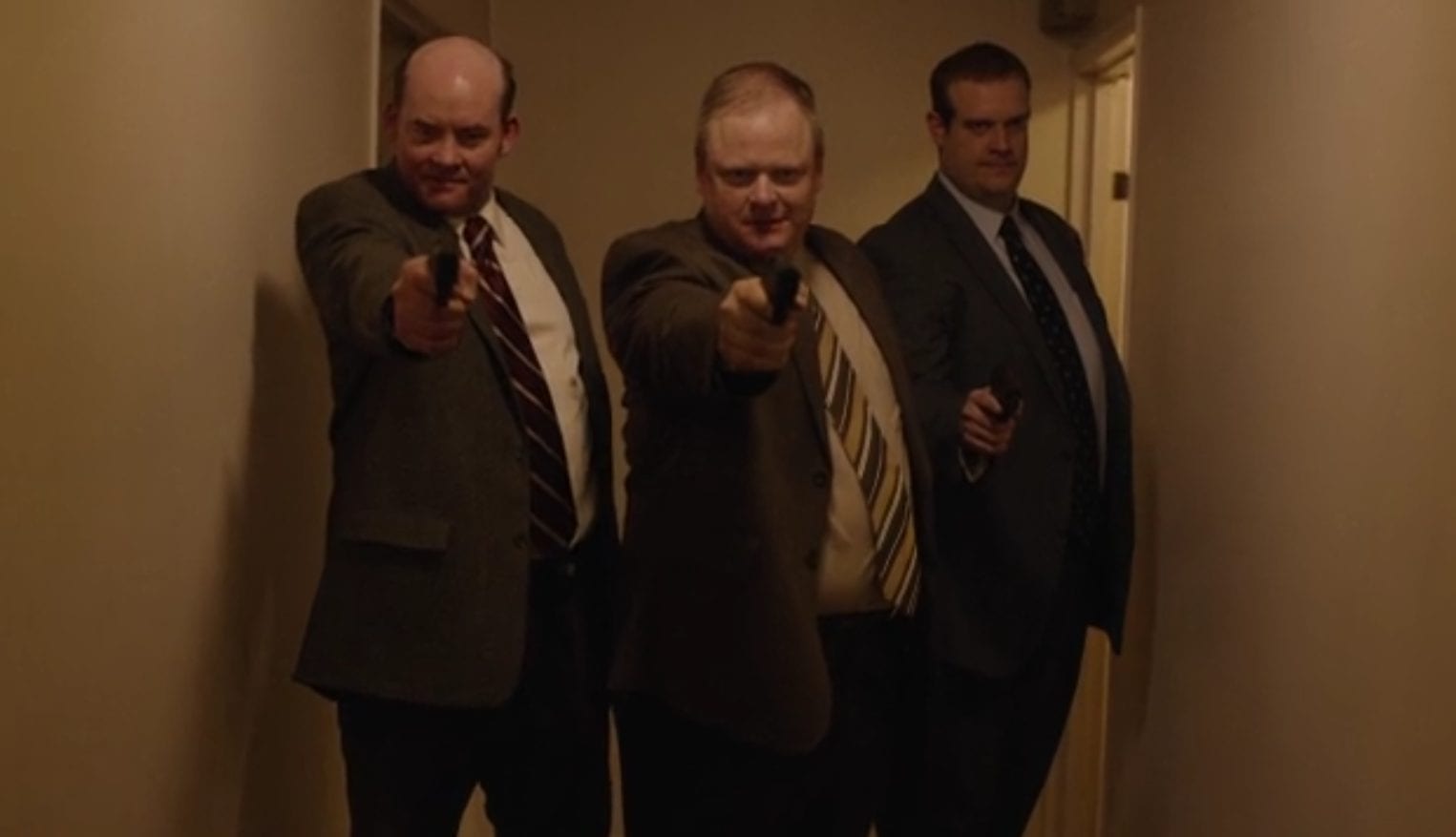 Have you ever met one of those couples that is so in tune with each other that it’s as if they share a brain?  They make the same gestures, they finish each other’s sentences, and they are just so darn sweet together that it makes your teeth hurt.  Detectives Fusco are like a trio version of one of those couples.  They are so alike that they all became detectives for the same department so that they could work the same cases.  It is as if you removed one from the mix you would be left with two-thirds of a human being.  (Or perhaps it depends on which one was removed, since Smiley Fusco doesn’t seem to provide so much brains as canned laughter.)  Like the Mitchum Bros., they don’t reside in Twin Peaks but Las Vegas, which is basically as polar opposite as one can get from Twin Peaks.  They do, however, completely belong in the world of Twin Peaks as a hilarious absurd bundle of brotherly love.

It is interesting how deep and beautiful the relationships between brothers are in Twin Peaks, whereas other sibling relationships fall flat or are basically non-existent.  We never see Sarah Palmer’s sister Beth.  Ed has a deadbeat sister who has left him responsible for her son James, (unless you go by the alternative reality provided by The Secret History of Twin Peaks, in which Ed has a brother named Billy, who is the father of James.  Very strange stuff.)  The three Hayward daughters never seem particularly close; Donna basically ignores her younger siblings, Harriet is a snitch, and Gersten grows up to be a homewrecker.  And then there are Donna’s potential half-siblings, Audrey and Johnny, who basically have a non-existent relationship.  Blackie and Nancy have a very jealous and back-stabbing way of existing together.  Norma and Annie have a very sweet relationship, but it is now questionable if Annie was even real or if she was another Black Lodge creation.  Twin Peaks doesn’t dwell on the concept of sisterly love, and it makes fun of the notion of romantic love leading to anything other than heartbreak and bloodshed.  And yet we know true, honest, and loyal love exists in this ongoing story, even if only between brothers.