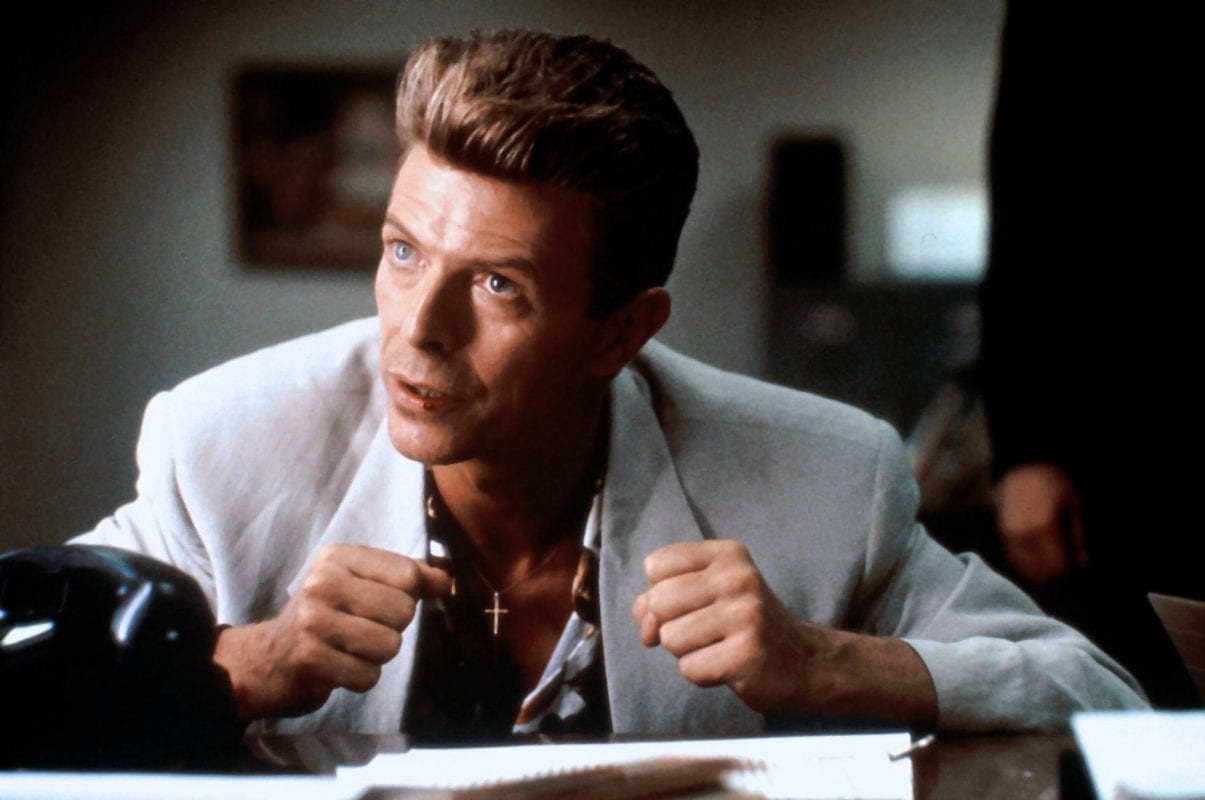 “I’m not going to talk about Judy. Keep Judy out of this.”

In theoretical physics, quantum entanglement refers to the notion that two things which were once connected can be separated by great distances and yet can still respond as a team. In Return To Twin Peaks: New Approaches to Materiality, Theory, and Genre on Television, Martha P. Nochimson’s essay “Substance Abuse” breaks down quantum entanglement for laypeople like this:

“…Entanglement, a phenomenon that occurs when two particles that were once joined, but now are separated, respond as one to a stimulus that directly affects only one of them, no matter how far apart the once-joined particles now are. Under the conditions of entanglement, cause and effect become extremely mysterious. A particle light years away from the particle with which it was entangled can react simultaneously to an inciting incident, although there is no physical connection as we understand it between the two particles and no physical connection between one of the entangled particles and the event. This is to say, entanglement baffles our common-sense expectation that we can analyze the relationship between cause and effect. We currently have no way to talk about what happens to entangled particles.”

We can also apply quantum entanglement to a socio-cultural context.

Consider the bond between a mother and the children she gestated and birthed: Many say a mother can feel it when something happens to her child even if they are opposite sides of the planet. Studies have shown the same for twins, triplets, and all those who have shared a womb with other human beings. One twin breaks an arm and the others feel it even though they may be nowhere near.

In a different frame of reference: abuse, domestic violence, rape, and other traumas forge a grotesque kind of quantum entanglement. An abuser can be absent for years — or dead even — and yet the pain they inflicted can rise to the survivor’s emotional and psychological surfaces with a simple detonated trigger point. The survivor might begin to replicate patterns of violence inflicted upon them onto others. Aftershocks of abuse, violence, trauma ripple outward into infinity. Only the privileged few manage to escape these tentacles of entanglement.

“I want to tell you everything, but I don’t have a lot to go on. But I’ll tell you one thing: Judy is positive about this.”

In Twin Peaks, Phillip Jeffries is one of the more enigmatic missing characters, and not just because he was played by The Goblin King, whose death continues to shake the souls of those of us forever entangled with him. When David Lynch told everyone that the events of Fire Walk With Me would be vital toward understanding The Return, I suspected he was talking about Jeffries. It was too much to hope that David Bowie would actually appear on screen; from our current timeline, Lynch began filming many months after Ziggy’s passing on into stardust.** But with all the speculation about Jeffries’s involvement in The Return, from Buenos Aires to Las Vegas to Buckhorn to Twin Peaks: every time someone mentions his name I get that special Bowie frisson. He’s not here, but he’s always here.

While I don’t like to theorize about visual art as surreal, Brechtian, and inscrutable as Twin Peaks, I have a strong suspicion that Jeffries is very much with Diane, too. Call it a hunch based on my own personal quantum entanglement with these two characters. I still believe that Diane is the survivor of terrible (possibly sexual) abuse at the hands of Bad Coop, BOB, and maybe others. The pain evident in her scene with DoppelCoop is too real to have been an act. And we see this worst kind of entanglement all the time with abuse survivors — they follow the ones who hurt them, who keep hurting them, because the shame cycle of abuse is easier to deal with than all the work it takes to sever those ties. The trauma bond can become thicker than blood or love, and will shape futures often for the worse. This is the quantum physics of abuse.

Just look at Shelly and her new drug-dealer boyfriend Red. And Becky and Stephen, Becky who follows in the footsteps of her domestic violence survivor mother. The quantum entanglement of traumatic pasts and genetic memory.

“Listen to me carefully. I saw one of their meetings. It was above a convenience store.”

If anyone embodies quantum entanglement in The Return my vote goes to Sarah Palmer. She still lives in that creepy house where her husband raped her daughter for years, and murdered her niece. She is bound to that place as much as she is bound to her dead daughter by virtue of having gestated and bringing her into this world. She is bound on a cellular level as well as spiritual one.

When buying her Bloody Mary fixings — no accident that her poison of preference references blood — Sarah finds herself in that other convenience store. The one where the Woodsmen do their strange dance and collect their rations of garmonbozia. The one above which BOB and MIKE used to live. Sarah’s quantum entanglement with her daughter’s soul gives her the ability to see the realities that live atop and below our own.

Did the Woodsmen follow Sarah home? They didn’t have to. She’s already a conduit.

“They are in our house now,” The Giant says to Good Coop in the Waiting Room. But here’s the thing: they might be there now, but they also possibly never left.

Because quantum entanglement isn’t the only thing that is real; quantum physics is real, too. It is possible for contradictory things to exist at the same time. Reality is a shifty beast.

“It was a dream. We live inside a dream.”

In her essay, Nochimson goes further:

“The nature of a particle when it is entangled or in superposition strains every concept we have ever been taught. Under those conditions, it is neither one nor two, but something in between that our verbal language cannot describe. Lynch’s visual vocabulary in Twin Peaks, however, is extraordinarily effective in conveying that in-between state of matter in which it is neither one nor two, but something more liminal and strange. To understand what Lynch is about, we need to think of these in-between moments as revelations of a deeper material reality—not as illusions or dreams, as so many critics are inclined to see them.”

Because as much as people would like to believe The Return will turn out to be an elaborate dream a la Mulholland Drive — or even a dream within Cooper or Audrey’s dreams — for the mere psychological, emotional, social, and cultural convenience of it, I would hope that we aren’t so “lucky.” In the context of Twin Peaks, convenience is a harbinger of darkness and evil beings.

“NO, NO.  I found something… in Seattle at Judy’s… And then, there they were…They sat quietly for hours.”

According to The Missing Pieces, a young lady left a note for Phillip Jeffries in his Buenos Aires hotel room. Was it Judy? Was it Diane? Is Judy Diane?

Also, like Sarah Palmer, Gordon Cole, Bill Hastings, Ruth Davenport, Major Briggs, and others, Phillip Jeffries saw the Woodsmen in their convenience store, too. And the majority of the people on this list are dead. What does it mean for Sarah and Gordon? And what about Diane? She didn’t see the convenience store, but she saw one of its entities before it crushed Hastings’s skull. Is she marked by the vision as well?

Thanks to theoretical physics, men were able to invent the atom bomb. Its detonation entangled the spiritual entities of BOB and LAURA, good and evil. But what of that young boy and girl we met years later? With whom are they entangled? And are those the same Woodsmen from Twin Peaks or are there many, many more than we’ve imagined? What provokes their entanglements in our world?

Shouldn’t doppelgängers also function under principles of quantum entanglement? We know they don’t because nothing happened to DougieCoop when DoppelCoop was shot and mutilated. But shouldn’t they, though?

And is my own brain getting crushed under the weight of so many questions and the possibility that there might never be comprehensive answers? Often, yes.

What I do know with certainty is that quantum entanglement is unpredictable, volatile, and can shape our actions even without our conscious knowledge. And the spaces between everything we know in Twin Peaks seem to grow larger the more they reveal things that were once hidden. Thus deepens our our entanglement.

Will all these weird roads of speculation eventually converge in Twin Peaks? My secret fear is that time might not actually tell and we’ll spend the next 25 years wondering.

*Italicized quotes were all spoken by Phillip Jeffries in Fire Walk With Me.”*

**Author’s note, August 6, 2017, 4:30 PM: A reader informed me that Lynch began filming in September 2015, a few months before our Ziggy left the mortal coil. Another reader let me know that Catherine Coulson, our Lady Margaret Lanterman, passed away the month they began filming, and she is very much a physical presence in The Return. Should we get our hopes up about David Bowie then?