Welcome back, dear reader.  Wow, another amazing hour of Twin Peaks.  This one had a theme of stories running through it.  Albert tells a story.  Gordon tells a story.  The Fireman tells a story.  Freddie tells a story.  Even the randoms at the Roadhouse have stories to tell.
Don’t worry though, this isn’t a dream.  This is what we do in the FBI.  We theorize.  Let’s begin.

Theory: There are alternate timelines / realities at work here.

Analysis: Not as much play on this one this week.  There was a strange effect when Truman, Hawk and Bobby returned to Jack Rabbit’s Palace, kind of like multiple realities overplayed on each other and then coalescing into one reality.  On the flip side, Gordon called both Las Vegas and Twin Peaks this episode, tying those events tighter.

Theory: The Audrey / Charlie scenes are not part of reality.

Analysis: Another small mention for this one.  At the Roadhouse, one of the two girls talking is self identified as Tina’s daughter, and is of course talking about her and her mother being the last to see Billy.  These people apparently have existence outside of Audrey’s reality.  So minor downgrade to the Audrey dream theory this week.

Analysis: We got two juicy tidbits from Diane this week.  Bad Cooper mentioned Major Briggs when he last saw Diane and Janey-E is Diane’s estranged half-sister.  But can we trust anything she says?  The first wouldn’t seem to help or hurt Bad Cooper either way.  But the latter is a great way to get them on track with the events in Las Vegas, which can only serve to work against him.  It would seem she was asked “Las Vegas?” because she knows about Dougie Jones, and by virtue of that, she knows of Janey-E.  The half-sister relationship could be a fabrication, or she could have set up her hated half-sister with the Dougie Jones construct nearly 20 years ago if she was somehow complicit in his manufacturing.

So the “-E” stands for Evans, same last name as Diane?  That would work.  Hmm.

Note also that she didn’t seem too surprised about the story they told her about Major Briggs (died 25 years ago but not really).  She was more exasperated than anything at Gordon’s question about whether Bad Cooper had mentioned him.

Theory: (You name it) is the Dreamer

Analysis: Personally, I don’t even know where to start on this one.  Let’s at least review a few possibilities:

We just don’t know enough to yet, but we’ll keep tabs on this one for sure.

Theory: Sarah Palmer is possessed by (you name it)

Analysis: OK, I’m going to start out by saying that I don’t like the idea of yet another retcon origin story, this time for Sarah Palmer.  People are now theorizing that, on the heels of the other theory I completely disagree with, that Sarah is 1956 Girl, she has always been either possessed or a lodge entity of some sort.  I refuse to believe this is what Frost and Lynch have come up with after 25 years to think on things.  They are just not going to retroactively nullify all of the pain and suffering Sarah, Leland and Laura went through at the hands of BOB.

So, given that starting point, there is a real Sarah Palmer, and she has either been possessed or replaced.  I personally lean towards the former, given the inner monologue she’s previously displayed (“find your keys Sarah”) and the Leland like way she flipped into hysterical screaming at the dead trucker, and flipped back into cold, calculating mode with the bartender (“Sure is a mystery, huh”).

The way she removed her face to reveal the darkness within kind of leans towards the Black Lodge construct / entity theory, though many have proposed this is just a visual vehicle Lynch is using to convey what possession looks like, now that he has the technology to do so.  It is, obviously, very reminiscent of the Laura in the Red Room removing her face to Cooper to show the light within, and that may not have been the real Laura (“I feel like I know her”).

As to who might be possessing Sarah, here’s a few points to consider:

Here’s a run down of a few candidates:

Whatever the case, they seem to be setting up a battle between Laura, filled with light, and Sarah, filled with darkness.  So much for Sarah’s moment of redemption I was hoping for this season.

As always, please reply below with your own comments and corrections, or give me your own well thought out theory.  You can catch me on various Facebook groups, such as “Twin Peaks (2017)” or our own “25 Years Later” page, on the Reddit r/twinpeaks forum, or email me at catnapspirit@gmail.com.  See ya next week. 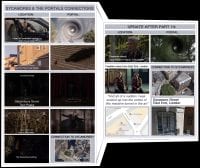