Yes its true; we are only days away Parts 17 and 18, the two hour conclusion of Twin Peaks: The Return. While Sunday will surely be a day filled with coffee, pie, doughnuts and tissues, let’s have some fun today and borrow Charlie’s crystal ball and see what we come up with. Bragging rights for any staffer whose prediction does indeed happen and for the staffers whose predictions don’t come true, they’ll be treated to my horrendous version of “Just You”  for years to come. As always we love to hear from you so please feel free to comment and let us know what you think! Let’s rock!

Brien: I believe bad Cooper’s timeline is a few days ahead of good Cooper’s timeline. This based on the “5 days ago” comment he made to Jeffries. So, I believe bad Cooper will get to Twin Peaks first, possibly having a day or two lead to work all kinds of mischief in good Cooper’s place. He’s going to be able to disguise himself as good Cooper (through magic) and pass himself off as the original Agent Cooper. So guard yourself when you see good Cooper driving past the Twin Peaks sign. That might not be him. 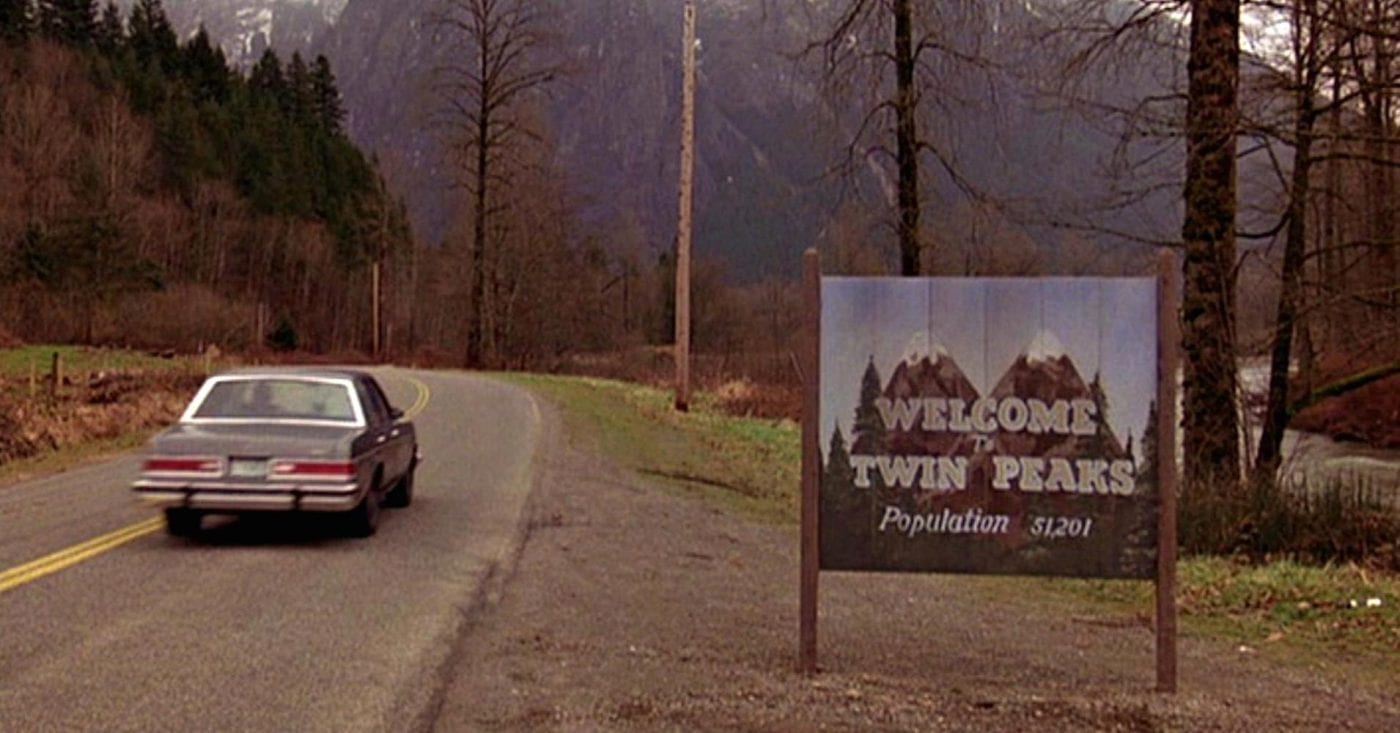 Laura: Lucy will be the one to determine who the real Cooper is. Lucy is a stickler for detail, one of the best law men at the station. She’s a puzzle solver. Let’s just hope she makes the right choice and sends the bad one back in. Bonus prediction: Albert will be killed in the line of duty in perhaps the most heartbreaking scene, saving Gordon, Tammy & Cooper. He will end up in the White Lodge – a  place similar to Briggs vision of Bobby. 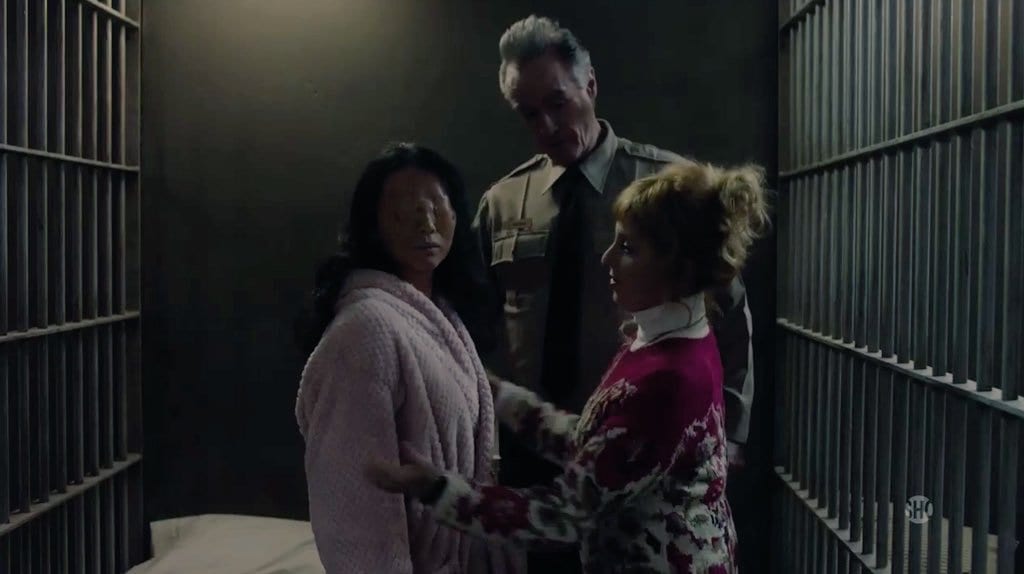 Eileen: Before Part 16 I would have suggested that Dale and DoppelCooper would recombine. Now, rather, I believe that Dale has to get him to wear the ring in order to send DoppelCooper back to the Lodge. I believe that Dale will in some way save Audrey. Some of what we have seen in Andy’s visions will be seen in one of these two parts. All forces will combine in Twin Peaks in Part 17 – i.e. Dale, the FBI and the Twin Peaks characters. Someone will make a sacrifice of some kind. Someone is likely going to die. That someone won’t be the same person. The big bad will not be DoppelCoop, but actually ‘The Experiment/Mother’/Sarah Palmer. 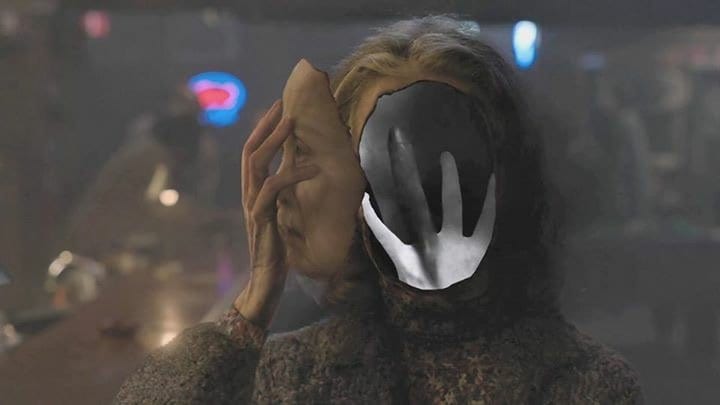 Ali: I think it’s going to end with the final scene from “Fire Walk With Me” with Laura and the angel and that Julee Cruise will be the last Roadhouse performer of the series. 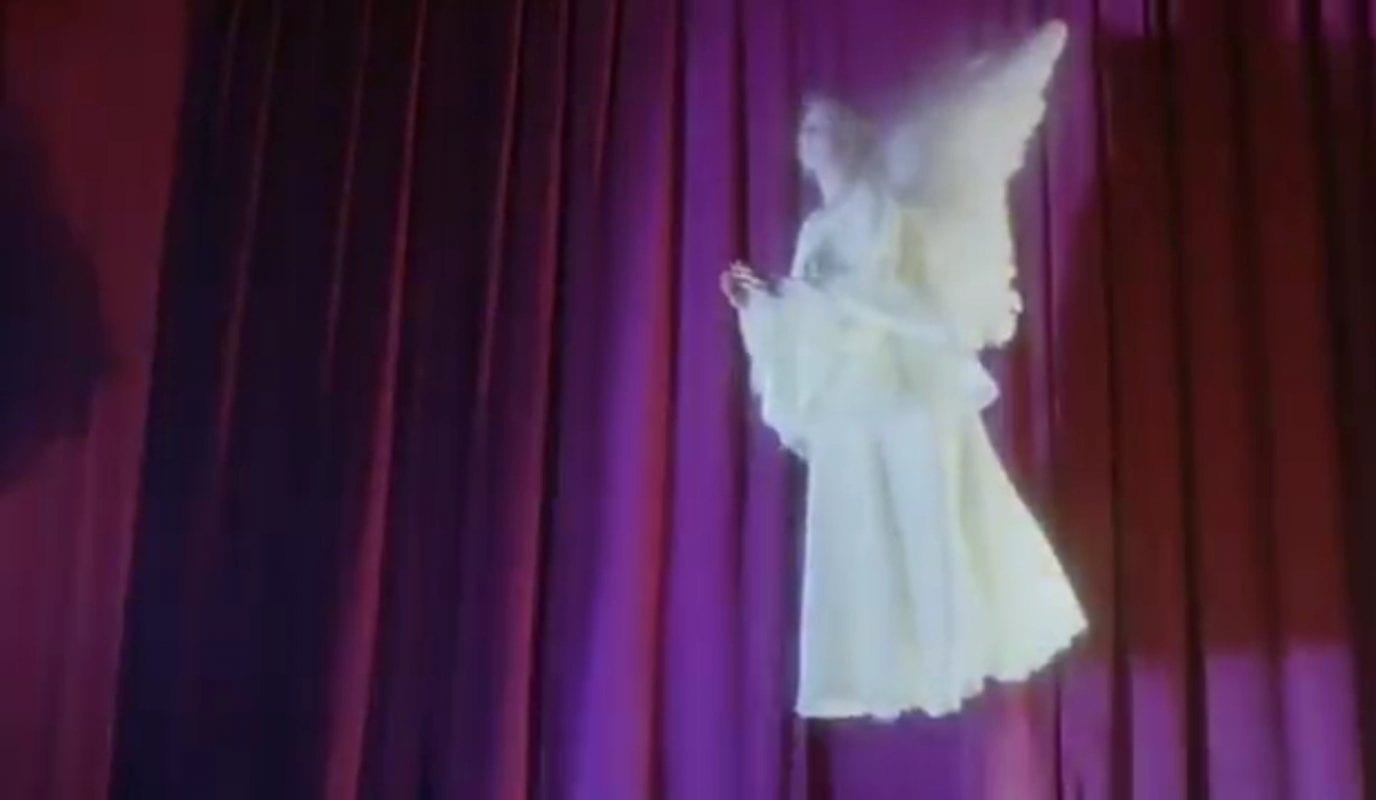 Lindsay: I believe Laura will return to us, just as surely as Cooper has. It will happen at the eleventh hour (or, more precisely, the eighteenth…). I am taking her at her word that she is dead and yet she lives; I don’t think there is any need to twist that around to mean anything else, as I’ve written elsewhere that The Return is being remarkably free and direct with its clues and not many of them have been red herrings. Having said that, I don’t know how this will happen. My suspicion all season has been that Laura was, at some point in the past, manufactured in order to save her. Is it a doppelgänger situation like with Mr. C and Cooper? Is she a tulpa like Diane and Dougie? Will she be instrumental in taking down the forces of evil in the world? Is she really Dale Cooper’s mother? 😉 It’s simply too early to tell. But I think we’ll find out soon.

I’m also going out on a limb in predicting the very thing I scarcely allowed my little shipper heart to imagine back on May 21 before the premiere: I think that some kind of reunion between Cooper and Audrey will absolutely happen. I really and truly believe that they were endgame all along. They are inextricably linked now–via the Lodges, electricity, and dreamscapes–and there I think their individual salvation depends on the forgiveness, understanding, and love that they will have to show to one another in order to heal and begin their lives on the other side of 25 years later. 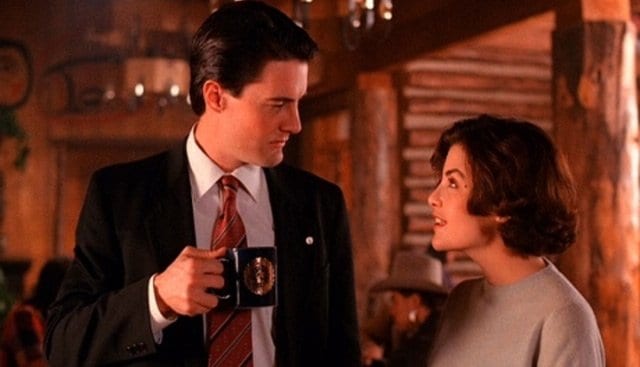 John: We will see a lot of the “Sparkle” kids in Part 17 in the Roadhouse and the heroes bump into Audrey there near the end. Then Part 18 is all about Doppel-Cooper vs Cooper and the Palmers (who hopefully get some kind of closure in the end).  And I think Jerry Horne got pulled into the vortex and had a chat with the Fireman. He thinks his industry is helping people, and I think he got a task just like Freddy and Andy. What is it? No idea. But I bet it’s something. 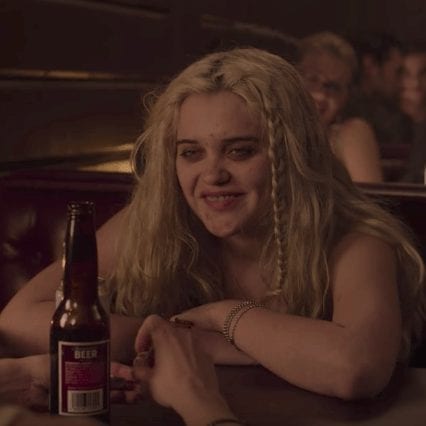 Andrew: If you read my column every Monday you know a few predictions I’ve stayed with for most of the season (Bookhouse Boys reunion, Harry Truman’s funeral bringing the town together for one scene). I’m not shying away from those but instead offering something new for this feature: It won’t be the final scene but somewhere in the finale BOB will find a new host and kill again. Lynch and Frost love pushing the idea that Twin Peaks and its many cycles live on, even without the camera watching. What better way to get that point across than giving us new BOB induced nightmares? 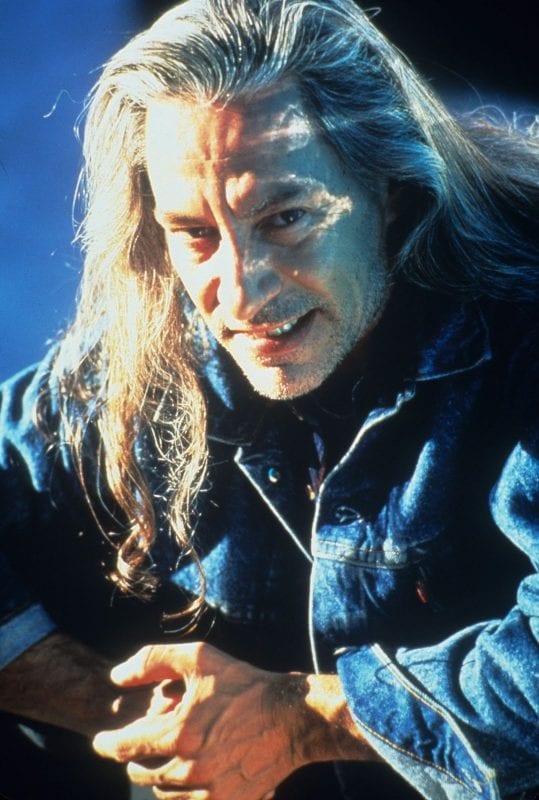 J.C. : Our Dale is back on his game, so I think a showdown with Mr. C will definitely happen in someway.  I’m hoping for a surprise Harry sighting upon his return. I picture Coop going into Harry’s hospital room asking, “Where can I get a damn good cup of coffee and a donut in this place?” (This is just a wishful thinking prediction).  We’ve also forgotten about Red, remember the other baddie traipsing around town with Shelley.  So I think either Bobby (or Bobby with the others from the Sheriff’s dept. plus Coop) will have a stand off with Red (who I also think will come to light as the Tremond grandson).  Laura will end up helping Sarah in some way, I’m just not sure how, but definitely in a big way.  If I could figure that one out ahead of time, I’d be writing with Frost and Lynch!  I also think there will be a large showdown at the Sheriff’s department between the Woodsmen, Naido/Judy/Diane and Freddie.  Now after seeing Part 16, I do believe that Coop is going to “rescue” Audrey in some way.  There has always been the protective vibe between him and her.  I also think when Coop finds out what Mr. C did to her, he’ll feel even more responsible for “saving” her.  All I know is that I cannot wait to see what all of them have in store for us! 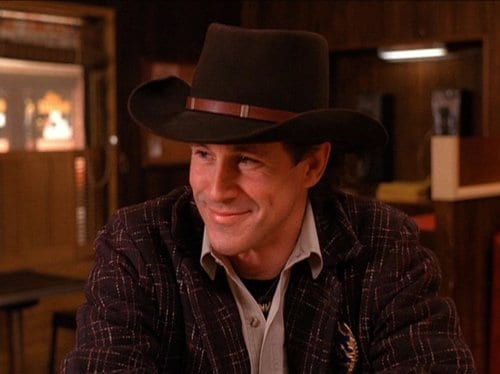 Matt A: Freddie and his magic glove will protect Naido from an attack, probably by Mr C. Coop will return to the town and help return Diane to her true self from Naido. There will be a battle between Coop and Mr C, hopefully involving high jinks and weird chase scenes through extra-dimensional zones. We’ll see the return of Laura, she’ll save Sarah from whatever darkness is lurking inside her and they will be reunited. Andy will become the new Fireman, Lucy will take over as Señorita Dido and they’ll have lovely beige chairs to sit in for all eternity. 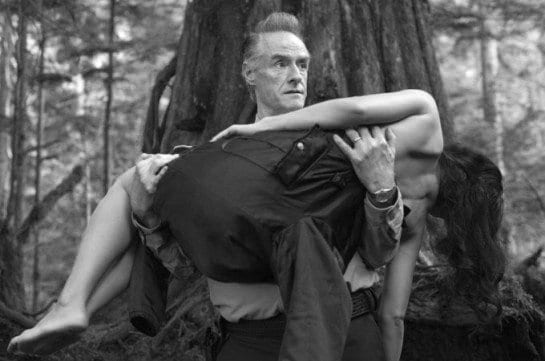 Gisela: My thinking for the last two hours of The Return goes around in more abstract themes and happenings, rather than in clear plot lines. These are the places and people who will play important roles in part 17-18:
Laura, Sarah and Leland Palmer. The Palmers are all cliffhangers as of now, and they’re too important to remain that way. Leland’s ”Find Laura” will have significance. Laura Palmer’s whisper to Cooper will definitely play a part. Sarah Palmer’s strange character and how she’s been portrayed is going to be important, especially in relation to Mr. C and Laura, but it will not be fully explained.

BOB. We haven’t seen the last of BOB. He will try to, or even manage to possess a new character.

Major Briggs. Whether Briggs will be an implicit key part, like he’s been throughout The Return, or appear as another cameo in some way is hard do say. But I’ve got a feeling that his head will either be found or speak again. At the very least, Major Briggs will somehow once more provide important information, this time I believe to Agent Cooper.

Naido. Naido’s strange language might be something that Agent Cooper will be able to decode. Agent Cooper and Naido will get a reunion, and that will turn out to be more important than just a ”hi, it’s you again”. It will bear much importance to the outcome.

Andy. Andy is now carrying knowledge that he might not be able to put together the importance of as to a complete, whole picture. But just as in the end of season 2, Andy will provide key parts and information from his vision by the Fireman’s, and the others will be able to figure out crucial clues because of this.

Lucy. The scene with Lucy and Andy from Andy’s vision is a scene that we are going to see play out. There is much seriousness to this scene, so it’s not about Andy giving her a fun surprise. Rather, Lucy’s gonna be faced with a task that only the ”pure of heart” will be able to solve, and it’s not impossible that it will involve Mr. C and/or Agent Cooper.

Hawk. Hawk will be a key player. Whatever happens.

The FBI. I’ve got a feeling that Albert will die by the hands of Mr. C. I don’t want him to, but that’s what I think. Gordon might get trapped in the Black Lodge or go into hiding like Major Briggs. 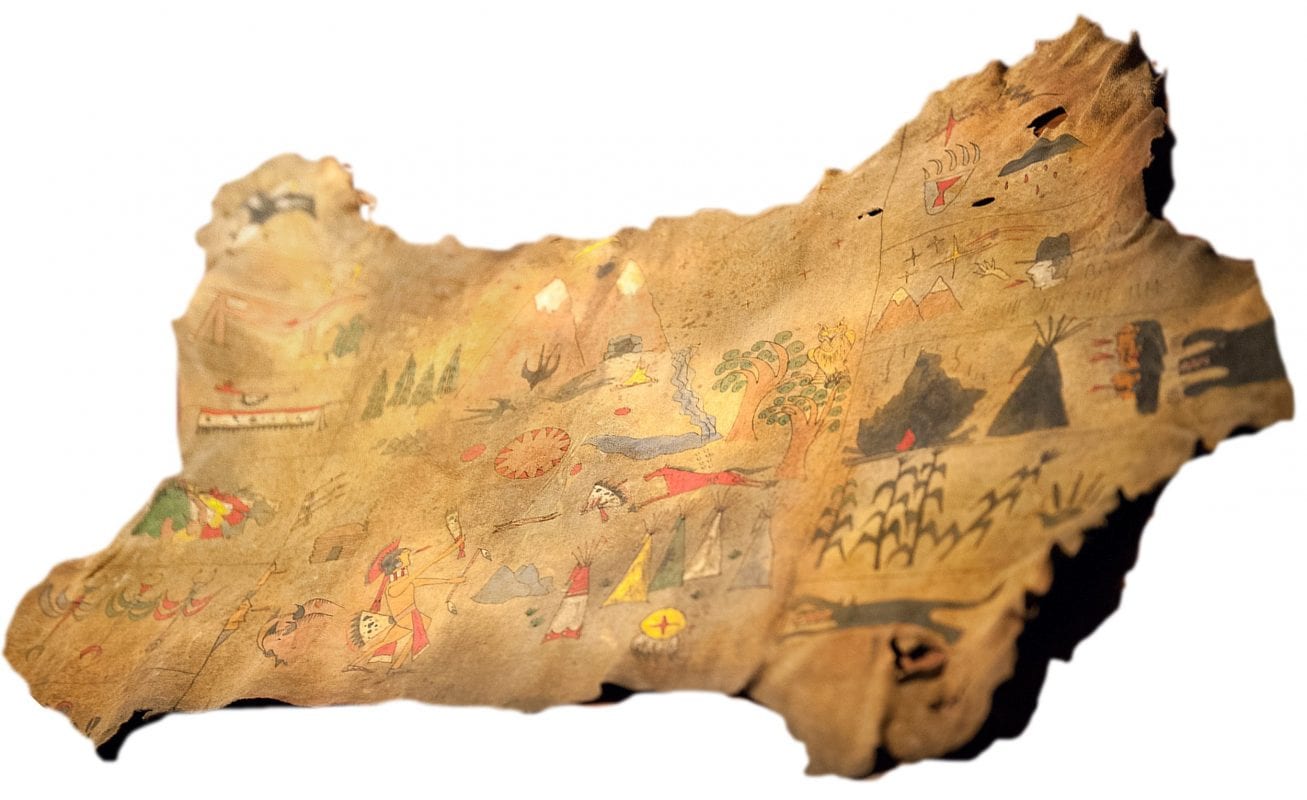