In the days since the finale, I’ve seen a lot of people insisting that Sarah Palmer is Judy. My Twin Peaks philosophy is and has always been that people should be free to interpret the show however they want and disagreements should be handled respectfully and without condescension. That said, I respectfully disagree that Sarah Palmer is Judy. I think that making Sarah Palmer into Judy is an attack on her character—a woman who has endured more pain and suffering than anyone else in the Twin Peaks universe except Laura. 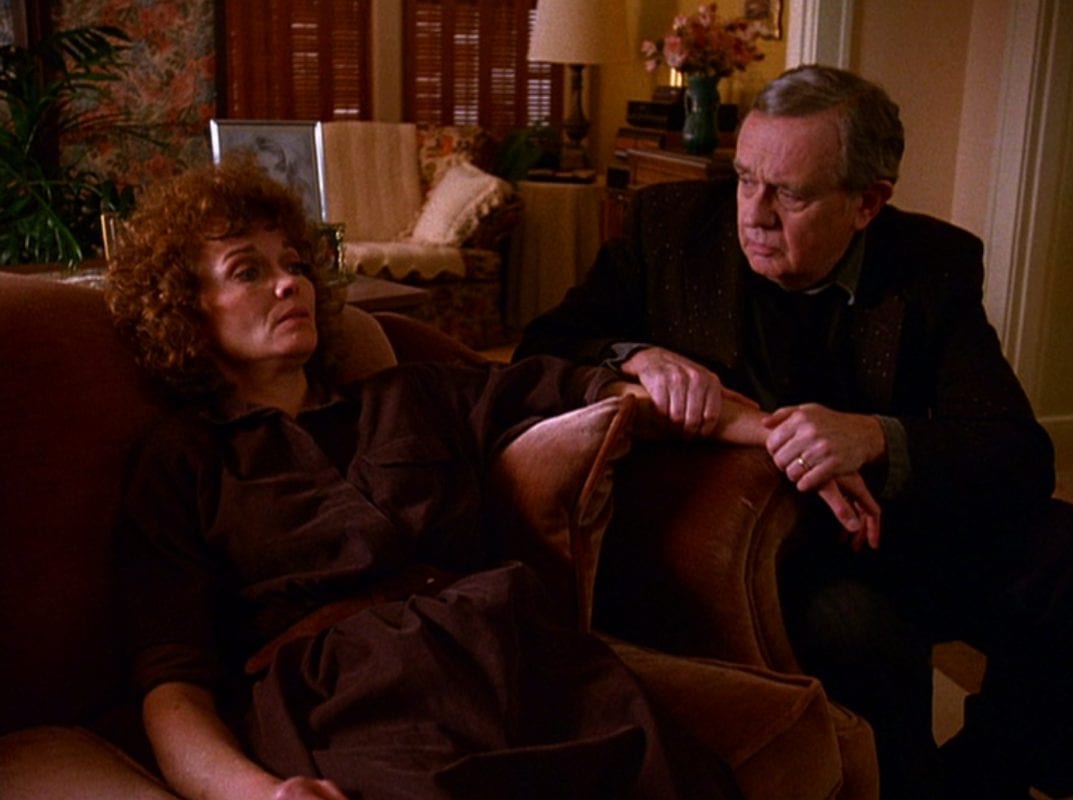 So, let’s talk about Judy. Here’s what we learned in Part 17: Judy, or Jowday, is an ancient entity—an extreme negative force in the world—that the Blue Rose Task Force has long been searching for. Gordon, Major Briggs, and Cooper all knew of the existence of Jowday and before Cooper’s disappearance they had formulated a plan to find it and (presumably) destroy it.

Previously, we only knew of Judy through the Phillip Jeffries scenes in The Missing Pieces. At the Palm Deluxe in Buenos Aires, Jeffries asks if a “Miss Judy” is staying there and the clerk gives him a note that “the young lady” left for him. A hotel employee takes his suitcase and leads him to his room. On his way there, he is transported to FBI headquarters in Philadelphia. After saying he’s not going to talk about Judy, he does just that. He says that he’s got some information and that “Judy is positive about this.” He also says he found something in Seattle, at Judy’s.

So, either Part 17 is either a complete retcon of Judy, or Judy/Jowday once possessed a young woman who lived (or kept a place) in Seattle and who left a note for Jeffries at the Palm Deluxe, where Jeffries thought she might be staying. If we ignore the possible retcon, all this information together suggests that Sarah Palmer is not the Judy they were looking for.

There is no evidence to suggest that Sarah Palmer was possessed at the time of Laura’s death or before. She was “gifted and damned” with visions of evil, could serve as a medium to deliver messages, and was just generally attuned to Lodge energy, but this is more a result of her proximity to evil in the form of BOB and the fact that the Palmer House is a Lodge-adjacent space. [For more of my thoughts on the Palmer House, read THIS.] 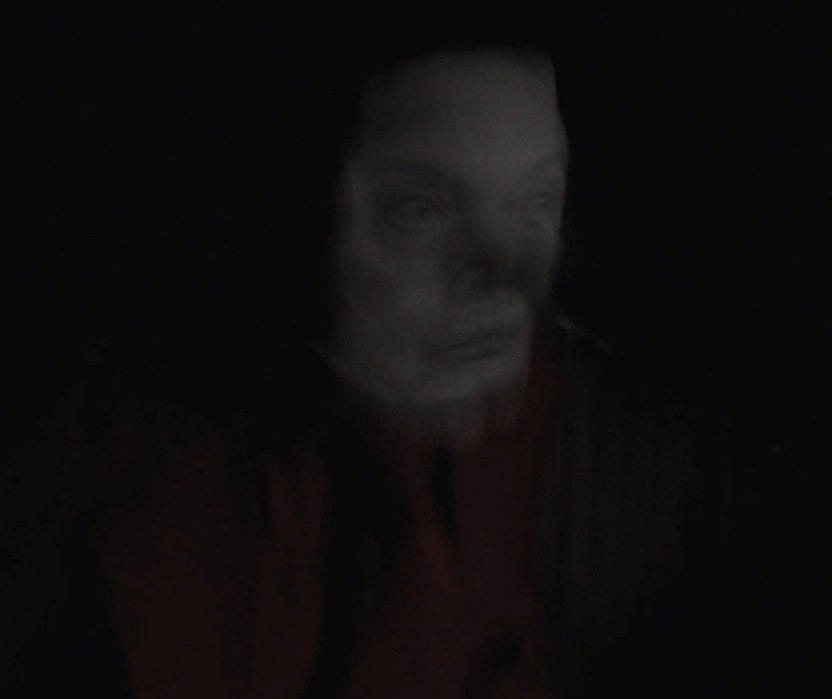 In The Return, we see that in the present-day Twin Peaks timeline, Sarah has been possessed. We also see Sarah’s face in the Jumping Man, which strongly suggests that it is not Judy/Jowday but the Jumping Man who has possessed her. The Jumping Man also has a large, pointed nose, which looks like whatever it was that came out of Sarah before she attacked the Truck You guy in the bar. We see the Jumping Man briefly in Part 17, going down the stairs after Cooper and Phillip Gerard have gone up them on their way to see Jeffries at The Dutchman’s. So where was he running to in such a hurry? I think he was going back to Sarah to try to prevent what was about to happen: Cooper trying to save Laura.

After Laura’s body glitches out and Pete Martell finally gets to go fishing, it cuts to Sarah in the present-day Palmer House. She’s wailing and moaning in the same way she did when she found out about Laura’s death on the phone with Leland. There’s also sound distortion and humming and whooshing sounds all indicating a strong Lodge presence. Then she comes out into the living room, grabs Laura’s picture, and starts to smash it with a vodka bottle. There are scratching sounds and time distortion but although the picture glass breaks, Laura’s picture remains undamaged. Directly after this, the young Laura being led towards the portal by Cooper disappears with whooshing wind and that scream that haunts all our dreams.

Some have claimed that the scene at the Palmer house, taking place in the present in between two scenes of the past, is Judy raging at and resisting Cooper’s attempt to save Laura. I don’t believe this to be the case. I believe this is Sarah Palmer reliving her trauma in a time loop as her past is being rewritten. But the Black Lodge has a hold on the Palmer House (and on part of Sarah) and all that whooshing and electrical humming is the Jumping Man trying to keep that hold. Sarah Palmer is not the evil. She’s trying to fight off the evil.

We’ve seen the real Sarah Palmer trying to fight these demons off before. She self-medicates with Bloody Marys. She tries to warn the kids working at the grocery store of the dangers that are all around them. She even tries to warn the Truck You guy to stay away from her and it’s only when he refuses and threatens her that she attacks him. 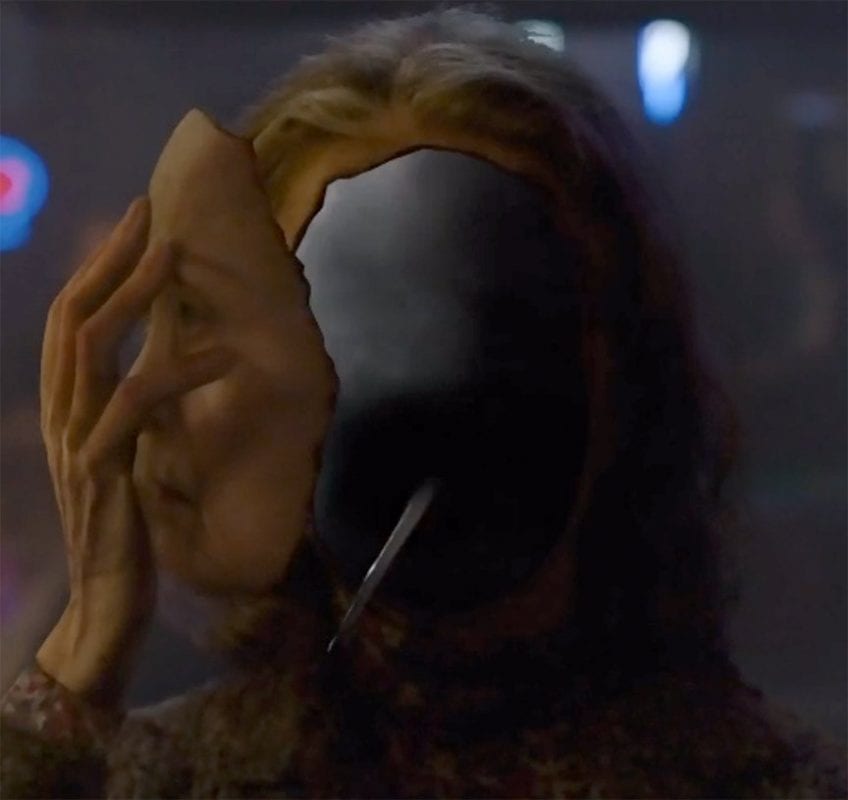 I am not in any way suggesting that Sarah Palmer does not have evil inside her. She does, and she’s got enough garmonbozia in her to satiate it for a very long time. But that evil is not Judy/Jowday; it is the Jumping Man. The ancient, evil entity that is Jowday may have brought the Jumping Man into this world, and the Jumping Man may be doing Jowday’s bidding, but he is only one soldier in Jowday’s army. Jowday itself is something much larger than any one spirit and that something is not inside Sarah.