So it’s been a while since the end of Series 3 and my millions of thoughts have started to percolate nicely. I have many, many! questions left unanswered as we all do but none more so than, what did happen to Major Garland Briggs and what was he doing for the last 25 years?

Way back in Series 2 we saw him being plucked from the woods by a still unknown, cloaked figure, whilst he was out fishing with the suspended from duties, Agent Dale Cooper. He returned to Twin Peaks 3 days later dressed in aviator gear more suited to the early 1900’s. Seems pretty likely he’d travelled back in time. He couldn’t really remember what had happened during his ‘abduction’ and his wife Betty had said he’d disappeared several times before, but as his work was classified we’d never learn where he went or why.

Garland later admitted to Coop and Harry that he was working on Project Blue Book,  a government investigation into supernatural or extraterrestrial going’s on, which had officially been disbanded years earlier. He learned that the governments reasons for wanting this knowledge were not pure and this weighed heavily on his conscience.

Major Briggs was a true and great man. As honest and pure of heart as you can get and that is why he was chosen by The Fireman.

My feelings are that Briggs, maybe like Phillip Jeffries, and Doug Milford were chosen by The Fireman to play a role in preventing the destruction of our planet by evil. I also feel that Phillip Jeffries failed in his mission, got sucked in maybe by greed or the lust for ‘the ring’. It’s maybe why he’s not sat comfortably inside The White Lodge, instead trapped inside a slippery machine, manipulating time. Perhaps he cannot be trusted. The Fireman keeps many machines at his place. Maybe they are filled with the souls of past missionaries? Could it be a type of purgatory?

After Series 2 we knew not of Briggs fate, but the ‘Secret History of Twin Peaks’ filled a huge void, and surpassed all expectations of just how important Briggs was to the story. 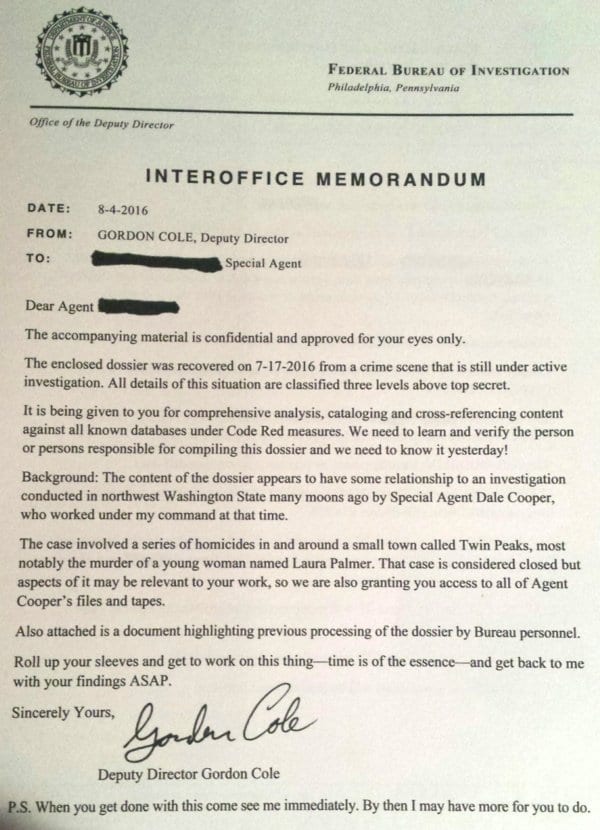 Briggs officially died in a fire at his station upon Blue Pine Mountain—Listening Post Alpha. The fire occurred shortly after he met with Agent Dale Cooper in his last days in Twin Peaks. It wasn’t the Good Dale though, it was his Doppelgänger, aka Mr.C. Upon learning this we all feared the worst – he had been murdered.

The SHOTP suggested otherwise however, as Briggs was revealed to be The Archivist – the compiler of the dossier. He had collected artefacts, papers from history, in an attempt to find the source behind the demise of our planet. Jow Day, or as we call her—Judy. The Mother of all Evil.

Briggs must have travelled back and fore through time to collect these pieces of evidence and the reason why he kept it was to ensure that his work was passed on should anything have happened to him. The SHOTP was not referred to in Series 3, but the message he left for Bobby, his son, in ‘This Is The Chair’ was like a capsule version of it. Proof enough on two small strips of paper that he knew what was coming, he knew his fate and embraced it. 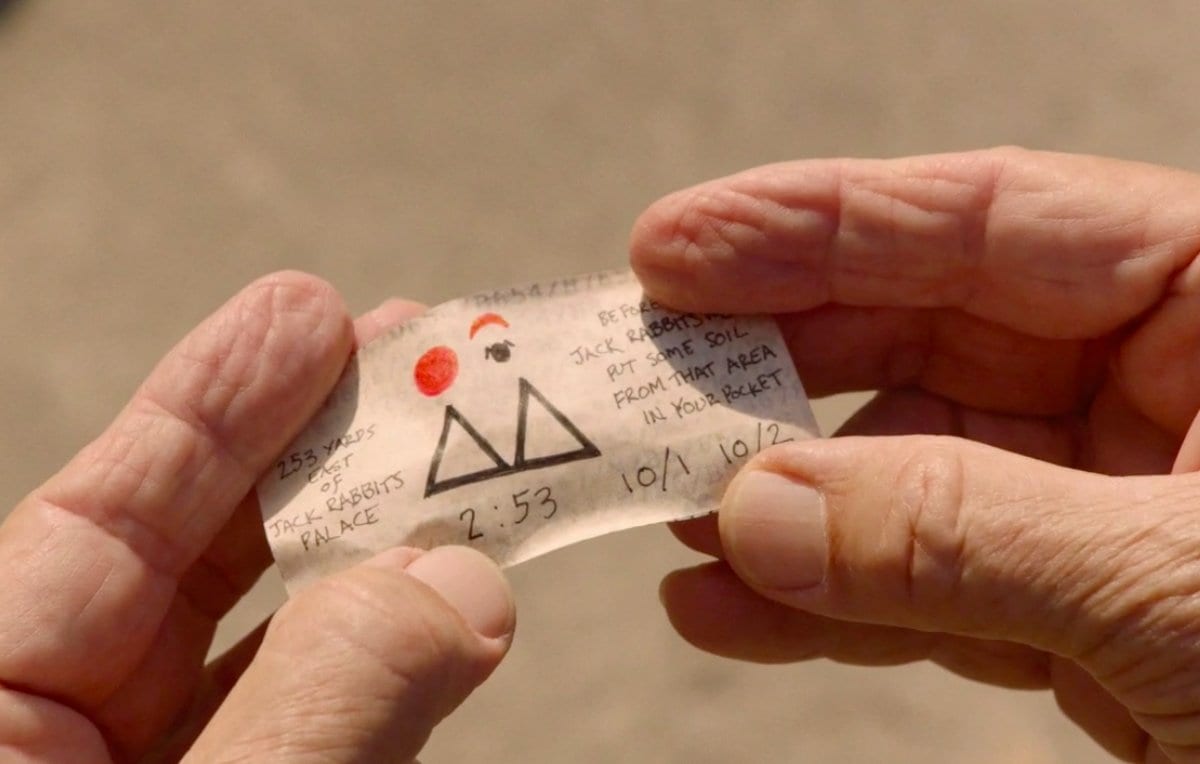 Everything Briggs did was for a reason. Even to the point of taking his son to Jack Rabbits Palace as a child, making up stories, creating warm memories in his conscience that he’d reminisce about, knowing that those memories would one day play a huge part in solving the puzzle. Even naming it Jack Rabbits Palace was a clue. Odessa, where Carrie Page would be found, has the Jack Rabbit as it’s town symbol. He left clues with the people he trusted the most. His son Bobby, Hawk, Truman and Cooper.

Indeed Briggs even appeared to the Good Dale posthumously when he met Naido in the purple place. He told him then she was a Blue Rose. Dale may not have been able to process that information then but he was taking it all in and ultimately it saved Naido/Diane from eternal entrapment in a body unable to see or speak, to tell her truth, for Dale knew exactly who she was the second he laid eyes on her. 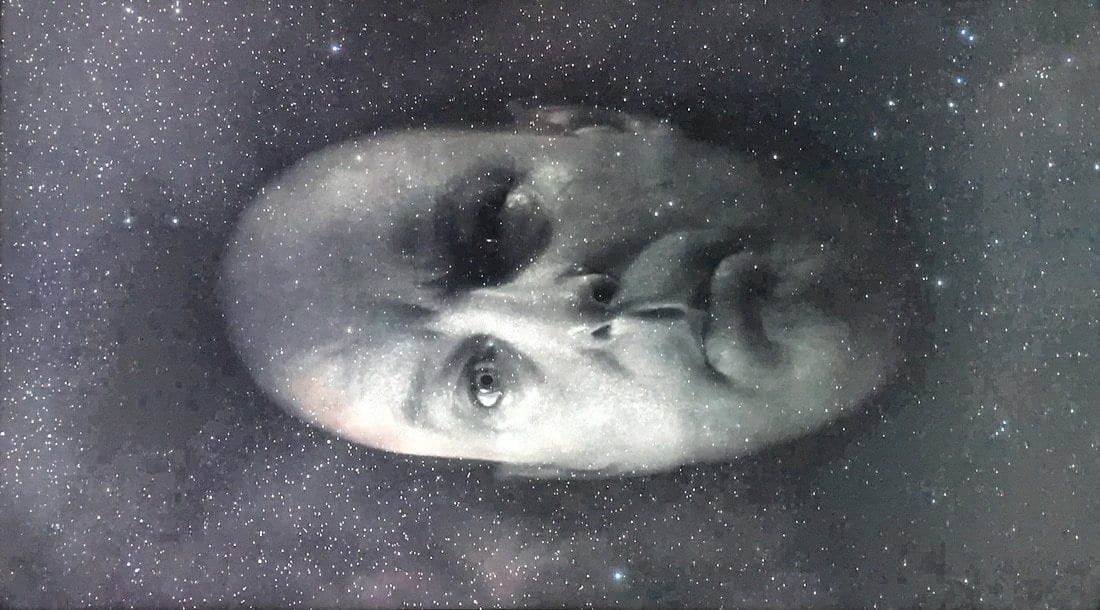 Even Briggs’ body was a clue. I feel that Briggs sacrificed himself for the greater good, after swallowing the wedding ring of Dougie Jones. Leaving one last clue for Gordon and his team to find the real Dale Cooper. He may well have been murdered by Mr.C or The Woodsmen—his head was never found, much like poor Bill Hastings it may have been crushed and obliterated, but he knew this would happen and he also knew that he’d continue to assist after his death. He waited, hiding in the dark of The Zone, quite probably The Dutchmans, until he was found by Hastings & Davenport and he enlisted their help, passed on one last message.

I’m still convinced even though we didn’t see it happen, that the dossier would have been found at Davenport’s apartment. Perhaps in another timeline, if events had turned out differently. He left a trail for every eventuality. Briggs may have played this part-time and time again over the 25 years since his ‘death’. He may have been attempting to find the perfect way to change events that would stop Judy, learning more as he went on. Putting more and more clues in place for our heroes in the ‘real world’ to figure out.

When Briggs’ body was discovered in Ruth’s bed, we learned that his prints had been discovered at 16 different locations, probably crime scenes, in the years after his official death. He must’ve been manipulating events, fixing things. Are the ‘glitches’ we see in Series 3, such as the reflection of Big Ed drinking coffee out of sync, the customer switch at the RR all hints of Briggs or another missionary changing history? Are timelines overlapping, deja vu?

Now that his body no longer exists he had to pass the baton onto someone else – Agent Dale Cooper. Briggs ensured that Dale was released from the Black Lodge quickly after his own true human death, so that Dale could continue his work, trying to find and destroy Judy.

Dale took to his mission straight away, saved Laura from death but maybe didn’t succeed in killing two birds with one stone. He’d either been tricked by Jeffries or MIKE and sent to the wrong date or The Jumping Man, who scarpered from The Dutchman’s upon Coop’s arrival, may have tipped Judy off.

I feel that Coop was tricked and he’s now opened up a can of worms. Carrie Page remembers her life as Laura and she’s not going to be happy. How are they going to get out of that timeline? Thankfully Briggs has left enough of a trail that they could be found.

Hawk has all the knowledge now. Just before Coop went off to save Laura in the moments before her murder, he said that things would change – he looked at Hawk and he nodded back at him. Cooper once said, “Hawk, if I’m ever lost, I hope you’re the man they send to find me”. He knows about Jack Rabbits Palace, he knows Laura is The One, he even has an inkling that somethings going on with Sarah Palmer. He also understands the living map, and the mother of all evil. And we know that he ventured into the woods and saw the red curtains of the lodge at Glastonberry Grove. What happened that night that we don’t know about?

There’s also a reason why Briggs travelled back in time to visit the Nez Perce tribe. They understood the true power of the ring and why it should not be worn. I stick to my theory that the answer to the whole conundrum is that Laura should never take the ring. If Hawk knows that too then maybe good can triumph. 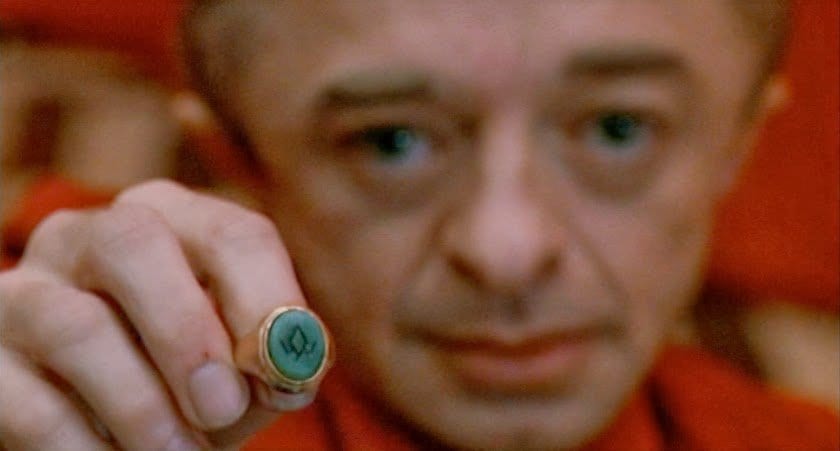 Like Milford passed on the mission to Briggs, Briggs has now passed it on to Cooper. Briggs remains with The Fireman, and his vision of Bobby’s future may still come to pass – the fact that he had it all should fill our hearts with hope of better times to come, that the mission will be fulfilled in at least one version of the future.

Briggs is at peace now and on a higher plane. He takes his place in The White Lodge, a master of time travel, his soul pure. He has laid the foundations and completed his mission. A true hero of our times. 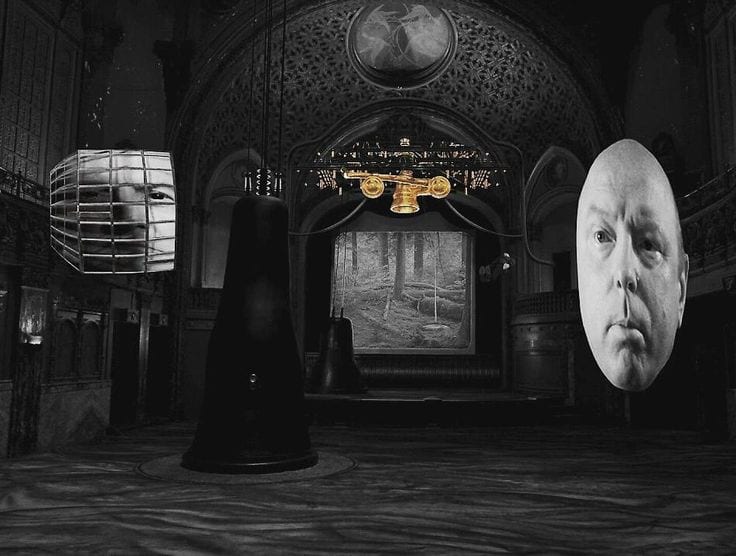