A guest feature by Shana Carter!

To paraphrase a certain Special Agent, when a character says in as many words that something is “very important” we must always pay strict attention, so let’s discuss Andy Brennan’s vision in part 14 and its imperfect realization in part 17. On first watch, the moment when he’s whisked away from the clearing east of Jack Rabbit’s Palace feels both startling and inevitable. Of course, Deputy Brennan, the holy fool of the Twin Peaks police department, who drops his gun outside the Timber Falls Motel yet shoots straight and true to save Harry Truman’s life, is given enlightenment and a key role in the story’s climax. Except that’s not quite how it plays out, is it? 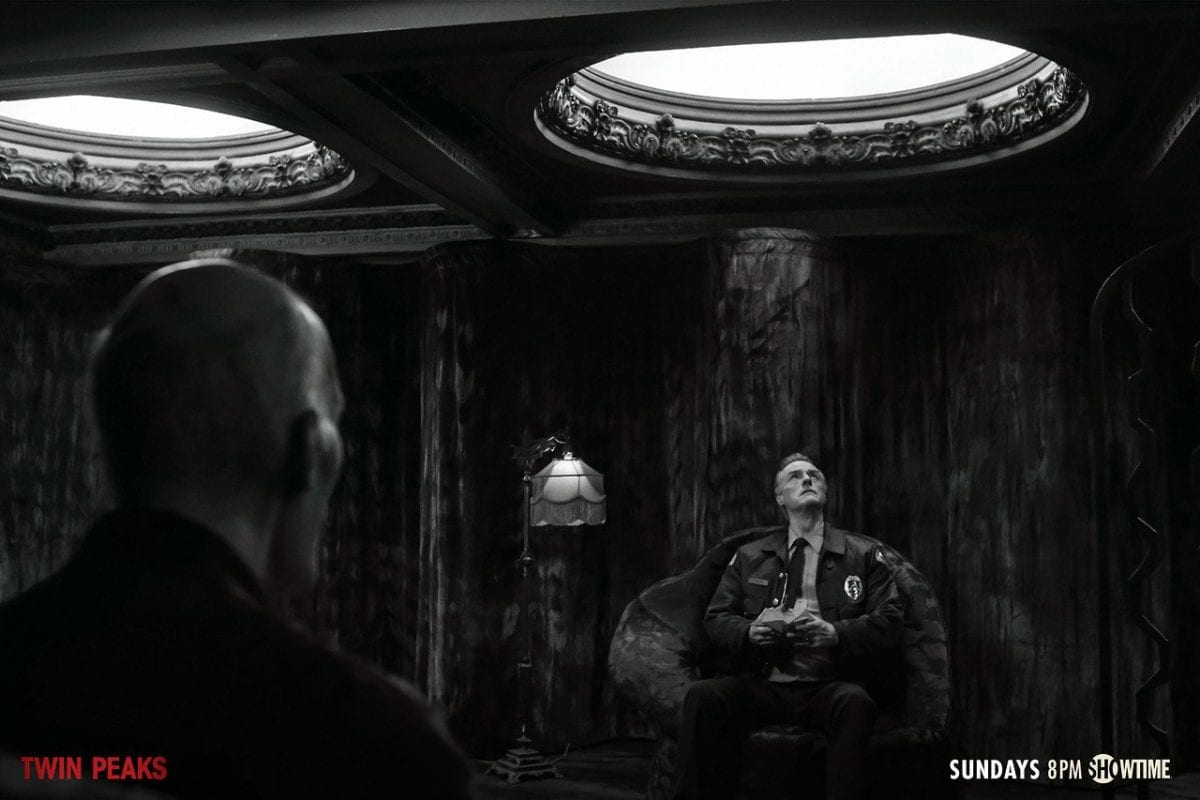 Here’s what we see happen. Andy’s transit from the forest to the Fireman’s domain is marked by a shift from color to black and white. Seated in the chair that Dale Cooper occupies in part 1, he watches the Fireman enter, sit, introduce himself, and raise his right hand. After a few seconds, the Fireman lowers his hand and Andy is suddenly holding an irregularly shaped object topped with — a nozzle? A fuse? Wisps of smoke coalesce and ascend, drawing Andy’s gaze to a circular opening in the ceiling, and the vision begins.

The first part of the montage can be divided into triptychs bracketed by shots of Andy:

Laura’s arrival in this narrative is marked by the introduction of color and a change in the rhythm of the editing. The remainder of the vision alternates between monochrome and muted polychrome. In the following list, plain text indicates black and white, italics mean color, and an asterisk (*) marks images followed by a shot of Andy reacting.

Like many viewers, I took the segment featuring Andy and Lucy as foreshadowing and was looking forward to seeing it play out in reality — an expectation which the show never fulfils. It seems like it’s going to happen in part 17 when Andy remembers that image and starts maneuvering people into position for the climactic showdown, pausing en route to the cellblock to say to Lucy, “Very important. Very important.” She does end up where she’s supposed to be, but the moment we were waiting for, Andy placing here there, is pre-empted by Chad’s escape attempt, a fact underscored by his mocking line, “If it isn’t the great, good cop, Deputy Andy … come to save the day.”

Why are we shown a failed prophecy? My theory is that the Fireman’s montage in part 14 is a key to decoding the last act of part 17. The monochrome images are things that cannot be altered (fixed points in time, for my fellow Doctor Who fans), while those in polychrome are in flux and subject to change. Thus, Andy’s interaction with Naido is in black and white, while that with Lucy is in color; at the time these moments are shown to him, the first is an immutable part of his past, but the second is yet to come and may or may not happen. So, why are the announcement of Laura’s death, her meeting with the angels, and Cooper’s doubling in color? Because those events are consequences of Laura’s murder, which Cooper tries to prevent or undo in part 17. Unfortunately, this creates a paradox and puts Cooper in what I’ll call a temporal infinity loop, stuck toggling between two timelines, one in which Laura Palmer dies on February 23, 1989, and another in which she doesn’t. 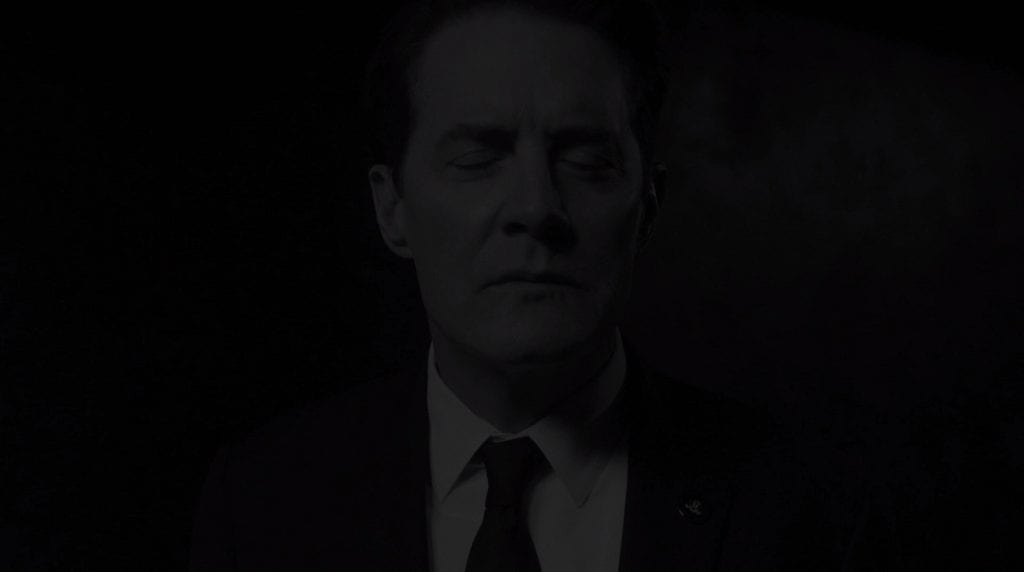 The clincher is what happens during the interaction between Agent Cooper, Phillip Gerard, and Phillip Jeffries at the Dutchman’s. Jeffries tells Cooper, “There it is. You can go in now” (the reverse of a refrain from the start of the season, “You can go out now”), adding, “Cooper … remember.” Gerard intones, “Electricity.” Lights flash and the footage stutters until Cooper closes his eyes and everything freezes. The camera zooms in on his face and the picture fades to grayscale. Cooper has made his choice and entered the loop.

It’s significant that the next scene, a sequence from Fire Walk With Me, is in black and white. The implication is that the older Cooper’s presence in 1989 doesn’t change anything — he was always the reason Laura screams during her final rendezvous with James Hurley. After she recognizes Cooper from a dream and takes his hand, we see monochromatic versions of familiar images: sodden hair, a body wrapped in plastic, a long shot of a corpse on the shore of Black Lake … which flickers and disappears. Color (choice, possibility) appears as Laura gasps and asks, “Where are we going?”

“We’re going home,” Cooper replies, and the camera tilts up, panning across the forest canopy as he leads her away. Then, in color, Josie Packard hums as she puts on her makeup. Pete Martell goes fishing. We’re vouchsafed a glimpse of a world where Laura Palmer survived that night.

But it’s not to be. Following a terrifying scene in Sarah Palmer’s living room, we fade in on Cooper leading Laura at arm’s length. A shot of the clearing east of Jack Rabbit’s Palace implies that this is their destination (sidebar: I interpret Cooper’s reference to “home” to mean the White Lodge rather than the Palmer house; he wants Laura to have an apotheosis without martyrdom). There are two more tracking shots of them walking through the woods. Then, the camera pushes in so that Laura is out of frame as the ambient night sounds are replaced by the scratching from part 1. Cooper stops, looks back, and finds his hand empty. We hear cloth rustling and Laura screaming, the same noises that accompanied the — expulsion? extraction? — of her older self from the Red Room in part 2. When her shrieks cut off, Cooper is left fruitlessly scanning the surrounding trees. A back and forth panning shot dissolves into Julee Cruise at the Roadhouse as “The World Spins” fades up in the sound mix. Then, the desolation and unresolved mystery of part 18.

Fortunately, there is a sign of hope at the end of the Fireman’s montage: paradoxically, or perversely, it’s the number 6 utility pole. The shots of the pole in part 14 are not from Fire Walk With Me or part 6, but situate it at a new location. In part 18, that place is revealed to be in front of Carrie Page’s house in Odessa, Texas. Since this object is a signifier of Lodge entities and violent death, its presence is anything but reassuring (and sure enough, there’s a flyblown corpse on the couch and a white horse on the mantel). Yet, in Andy’s vision, it transitions from black and white to color — from an absolute to an option.

Maybe Cooper isn’t doomed to endless wandering, a stranger in a strange land. My best guess is that to end his odyssey, he must heed Phillip Jeffries’s parting words and “remember” whatever Laura whispers to him in part 2, which he doesn’t hear in part 18 while retracing his journey through the Red Room yet recalls when the Arm mentions the little girl who lived down the lane. Perhaps if he does that, he will see Laura with the angels again, and find peace. 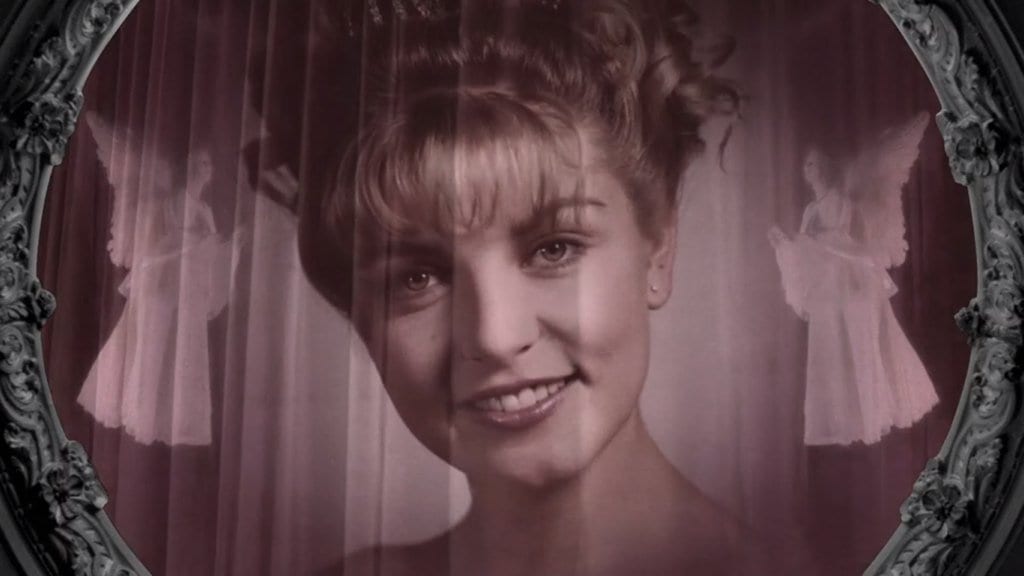 Shana Carter watched seasons 1 and 2 when they first aired on ABC, saw Fire Walk With Me during its original theatrical run, read her copies of The Secret Diary and My Life, My Tapes to tatters, and is looking forward to spending the next quarter century obsessing as hard as ever. She lives in New York City.