I had every intention of writing about the theories and beliefs I’ve clung to about Agent Cooper since my re-watch of Parts 17 and 18. If you’ve read any of my work or talked to me, you know that I don’t believe for a second that Agent Cooper changed history and prevented Laura Palmer from dying. You know that I believe that the scene of Laura’s body vanishing from the beach and Pete finally getting to go fishing on that February morning were but fleeting ideas shown to us visually that were not meant to be, as indicated by Laura leaving Dale in the woods at the end of Part 17. The past simply cannot be undone. What if I’m wrong though? What if Dale Cooper actually did prevent Laura Palmer from meeting Leo, Jacques and Ronette that night in the woods? What if instead of being pulled back to where we know she went (which is what I’ve always believed), she just went home? What does that mean for the story we have all known and loved for the past 27 years? 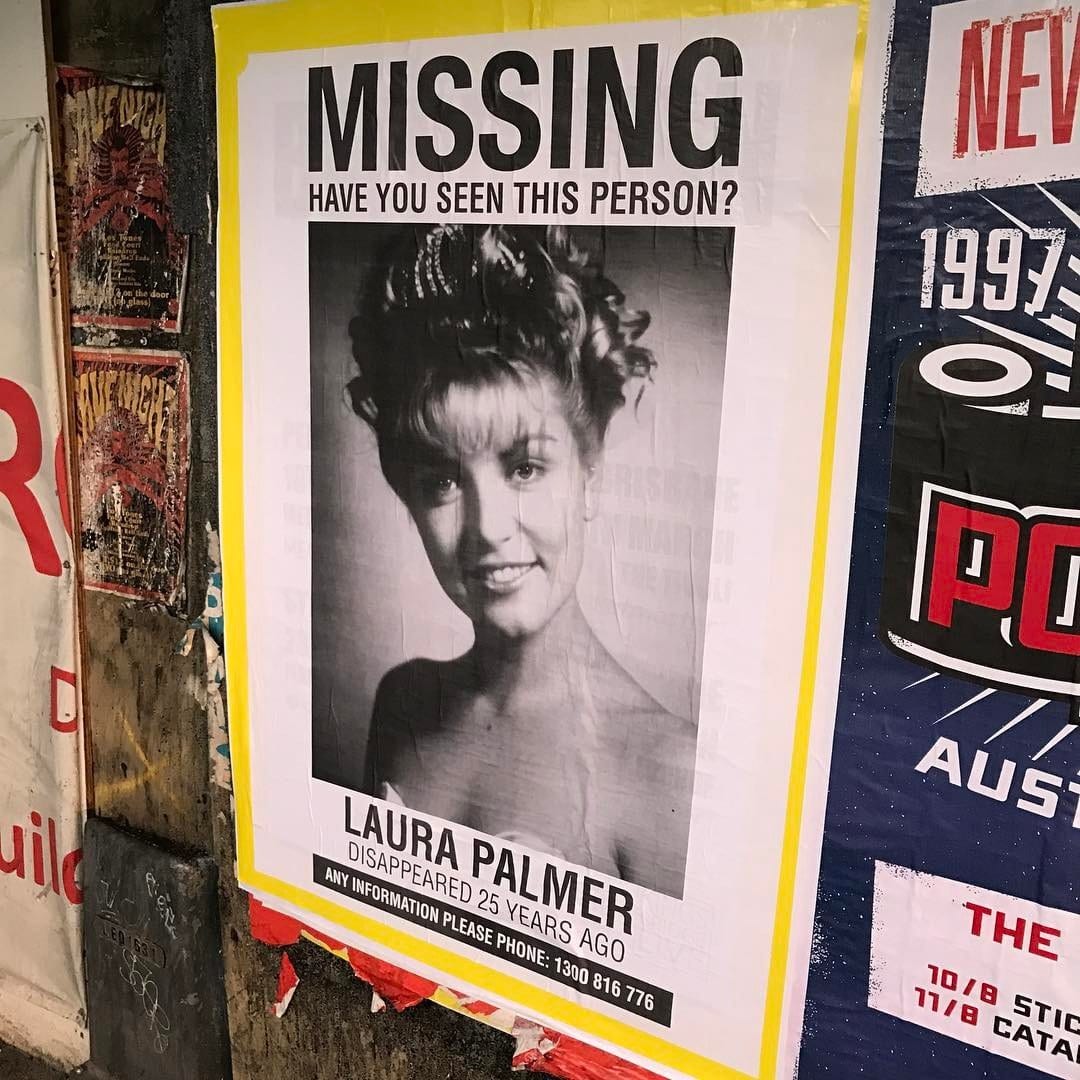 Prior to The Return, there was a promotional ad ran in Australia with the picture above. Numerous people called the phone number attached and the Twin Peaks theme would play followed by a backward message in a familiar voice: “It is happening again”. Could this have been a publicity stunt that was merely meant to conjure up interest in the show returning? Possibly. Could this have been a clue that Laura did live that night and chose to leave town instead of dying? That’s also possible. The aftermath in the town of Twin Peaks would still be bad—people would be hurt, confused, angry, and forced to face some ugly truths. BOB would certainly be furious that he didn’t get Laura after years of torture and abuse, all by design as BOB attempted to beat the one he always wanted into submission. Would BOB/Leland have killed someone else, much like how they killed Maddy in the original series as a way of gaining power back after being defeated by Laura? Using that logic, Agent Cooper could still be called to Twin Peaks, only to investigate a different murder carried out by BOB/ Leland. That would also maintain the Laura/Cooper relationship because instead of being drawn to Twin Peaks because of her death, he would now be called because her disappearance caused another death. Either way, Laura is responsible for bringing Cooper to the place where he needs to be for the continuation of his journey: near the entrance of the Red Room.

Mark Frost’s The Secret History of Twin Peaks that was released several months before The Return premiered and brought about this idea of history having been changed. Readers tore through the book, completely unsure of what to make of these details that weren’t what longtime fans remembered to be true. One of those discrepancies was Laura’s age at the time of her death. The original series and Fire Walk With Me both had explicitly stated that Laura Palmer was 17 at the time of her death. Now, in one of many changes to facts, dates and details we thought we knew for certain, Mark Frost’s book stated that Laura was 18 at the time of her death.  So now our work as Twin Peaks detectives becomes even more complicated. Did Laura simply disappear as the viral campaign suggested? Did Agent Cooper delay but not prevent her murder in Part 17, as The Secret History of Twin Peaks could be implying? Are neither possibilities true, and the past wasn’t changed? Do we need to seek out other explanations for both the ads and the book? Or could all of the above be true?

Dear readers, let’s get weird for a minute. I mean, this is Twin Peaks we’re talking about here. What if ALL of our theories were correct? I’m not just saying that in a stereotypical, David Lynch non answer way either. Twin Peaks has always been about duality to the point where even the show’s name suggests it. We’ve had identical cousins, we’ve had doppelgängers, black lodges and white lodges and the list goes on from there. The example I want to focus on is the poem we’ve heard recited numerous times throughout the series by the One-Armed Man – “one chants out between two worlds, fire walk with me”. Is it any coincidence that we heard the poem in Part 17 right as Agent Cooper began his journey and that it was the only time we heard it in this 18-hour film? There has to be significance to that. Our beloved Agent Cooper was between two worlds at that moment, seeking guidance on how to move from where he was to where he wanted to be. 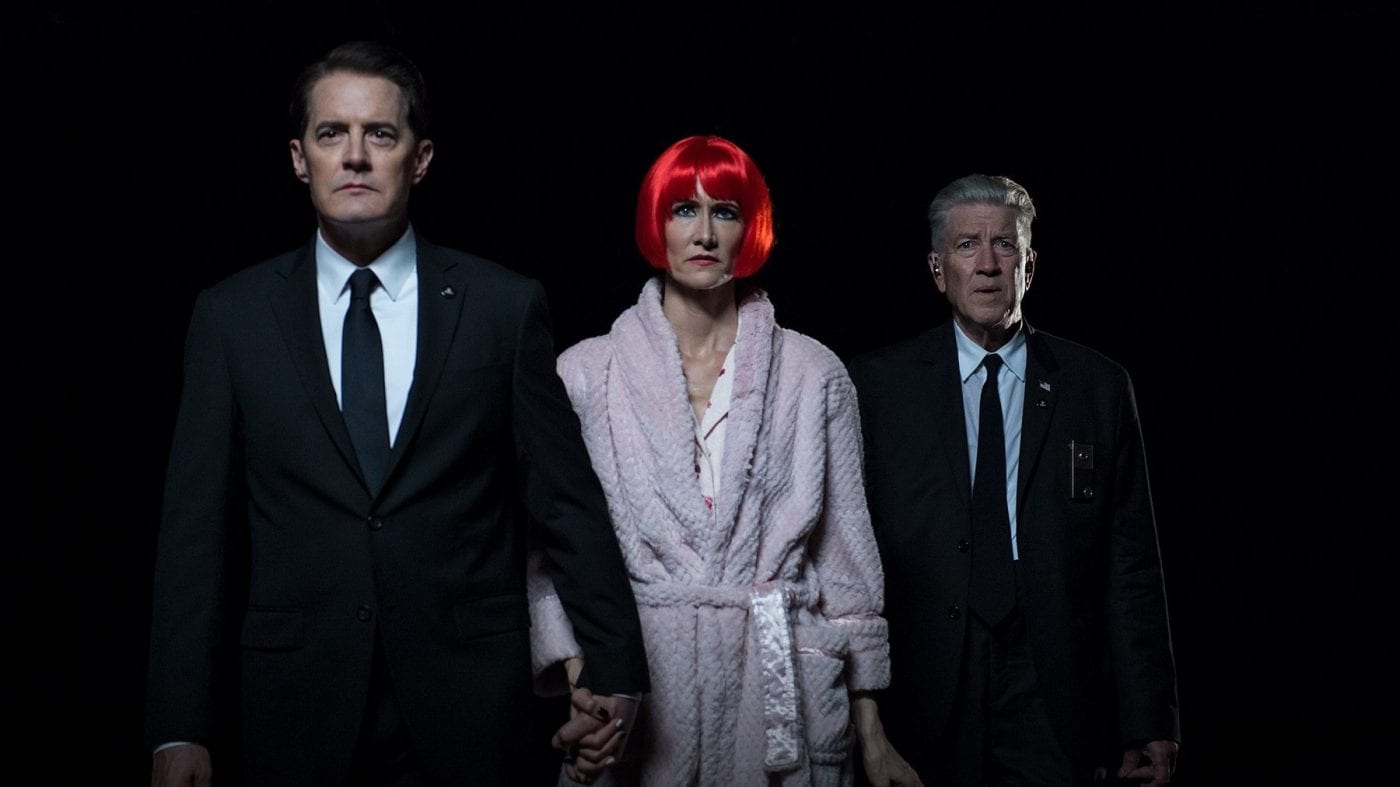 Perhaps our strongest evidence of two worlds existing side by side in the show was at the end of Part 7 during a scene at the Double R. It seemed like an ordinary evening, Shelly was waiting on customers and within the blink of an eye, all of the people inside the diner were replaced by different diner patrons. Shelly was still there, but everyone else was different. It was almost as if the show was displaying one reality and then another, where some of the details were different but not in an overwhelmingly drastic way—much like The Secret History of Twin Peaks gave us.

I’ve never had a good theory on how The Secret History of Twin Peaks and all of its discrepancies fit into The Return. I’ve never had a good theory on how the glitches we saw throughout the show (Big Ed, Part 7’s ending and more) fit in. I have to admit that is interesting to think about it being two worlds running next to each other and those that are caught “between two worlds” like Phillip Jeffries for example, are the ones that know some of what’s really going on but have consequences to pay. It’s interesting to think about, but I’m not entirely convinced either. Next week, I will be sticking with Agent Cooper and taking a look at the beliefs I’ve had about his character and his journey since my initial re-watch. I am glad that I took the time to examine other’s points of views though. So much about Twin Peaks is keeping an open mind. Until next time my friends…