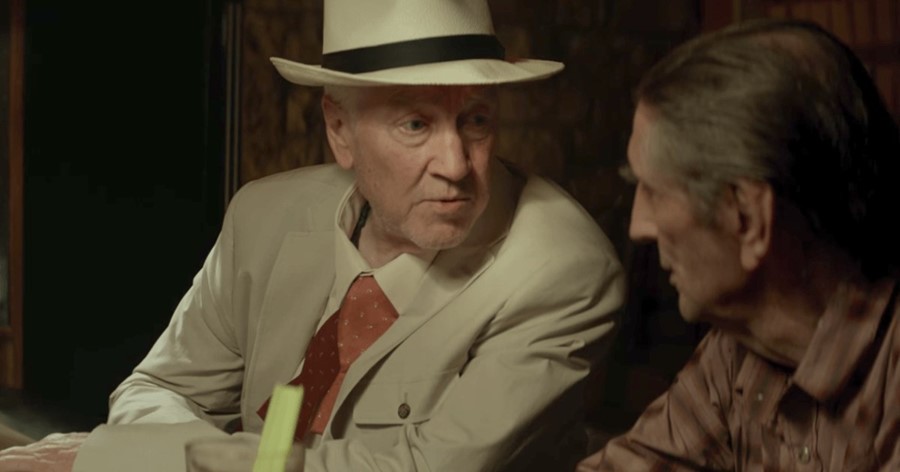 When I sat down in the beautiful (and absolutely jam packed) Downer Theatre at the Milwaukee Film Festival to view the movie I’d worried I would never have the opportunity to see, I really didn’t know what was in store beyond some great character acting, acerbic wit and discussions of a missing tortoise. While I got just that, what I didn’t expect was to be consistently reminded of my beloved late grandfather, or to experience a film where the discussion at its heart was so apropos to the life of the recently passed star, Harry Dean Stanton. As his final film, and the second of which he held the starring role, Lucky will surely be remembered as one of Stanton’s greatest accomplishments and a testament to the depth of thought and heart in even the most simple of lives.

The film opens with an introduction to the titular character in glimpses – feet, hands, legs, arms, chest – as he performs his morning routine; turning on the radio, smoking, washing up, drinking an ice cold glass of milk, smoking, yoga, and more smoking among them. It is an intimate opening to a character who, at first, seems unwilling to come out of his shell, much akin to his friend Howie’s (David Lynch) tortoise. Dressed and ready for the day, we watch from behind as Lucky opens the door of his house, flooding the room with sunlight, engulfing him in the process. One of the two most highly symbolic moments in this film, the shot stuns absolutely in its composition and speaks to what is hopefully only the beginning of John Carroll Lynch’s directorial career.

Only when we pan down from the bluest of blue Arizona skies are we finally treated to a glimpse of the familiar careworn face. The colour palette of this film is at once warm and washed out. As a part of the “American Independents Series” for this year’s festival, it focuses as much on the character of a place as the people in it. The town in which Lucky lives contains as much harshness and beauty as he does. Filmed over 18 days, one in Arizona and the rest in California, it captures the slow, hot mood of a bright desert day. Life there moves as listlessly as the tortoise, President Roosevelt, its day to day affairs merely the collected routines of its inhabitants.

Accenting Stanton’s performance is an incredible cast featuring David Lynch, Tom Skerritt (MASH, Top Gun, Alien), Barry Shabaka Henley ( Ali, Collateral, Miami Vice), Ed Begley Jr. (St. Elsewhere, An Officer and A Gentleman), Beth Grant (The Mindy Project, Pushing Daisies, Jericho) who round out the townsfolk that orbit Lucky as he smokes his way across town, and through locations where he’s been banned for the same reason.

Lucky’s seemingly simple existence is ever deepened as he begins to come out of his shell following a minor accident, coming to grips with the definition of ‘realism’ and revealing more about himself as he finally starts to interact with the people around him, rather than reacting to them, and they in turn begin to do the same. At one point, Lucky defends the difference between the words ‘alone’ and ‘lonely’, stating that alone comes from the words ‘all one’, and considers it to be a beautiful thing. What he doesn’t understand until he starts to actively participate in the lives of others is that being alone isn’t the only way to live life beautifully.

Lucky’s stubborn nature, tender heart, and even his basic human fear eventually combine into a picture of what it means to be truly brave. Lucky is, at its core, a film about acceptance. Acceptance of death, of aging, of loss. But as much as it is about these things, it is also about learning to live in the face of those things, being oneself and the brave refusal to surrender happiness even when faced with the most harsh of truths – that no one makes it out of this world alive.

After the screening, I had the good luck to sit in for an interview with producer Matthew Soraci. The link to listen is provided below. He offers details about the production, and script, anecdotes about Stanton and information about future releases. Hopefully, we will be able to view Lucky on Hulu, as well as on DVD and Blu Ray if ratings remain as consistently and favourably high.

Find out more about Lucky at http://www.magpicturesinternational.com/lucky and more about the Milwaukee Film Festival at https://mkefilm.org/