It was quite a shock when Tulpa Diane revealed that she was the half sister of Janey-E. In fact I didn’t actually believe it for a while, of course I didn’t know she was a Tulpa at that point and assumed she was working for the ‘dark side’ willingly, I didn’t know she was programmed, manufactured for a purpose.  Her purpose being to play the part of Agent Coopers former secretary whilst the real one was kept inside a body unable to communicate the truth – bound inside a blinded, chirp chattering host, unrecognisable to anyone that knew her.

But I think we know now that Tulpa Diane spoke the truth. The real Diane’s thoughts and memories crept out from time to time, none more importantly than in her final moments when she uttered, “I am not me, I am in the Sheriffs Station”. The truth will always find a way.

So Diane and Janey were half-sisters.  They had fallen out some years earlier, we don’t know what over but Diane knew that Janey had married a man named Dougie Jones.  How much did Diane know of Dougie, the manufactured being who looked almost exactly like Agent Dale Cooper?

It appears that Dougie Jones was created in around 1997, that was when he first appeared on the scene and no records of him prior to that exist. So he had been living amongst us for almost 20 years. 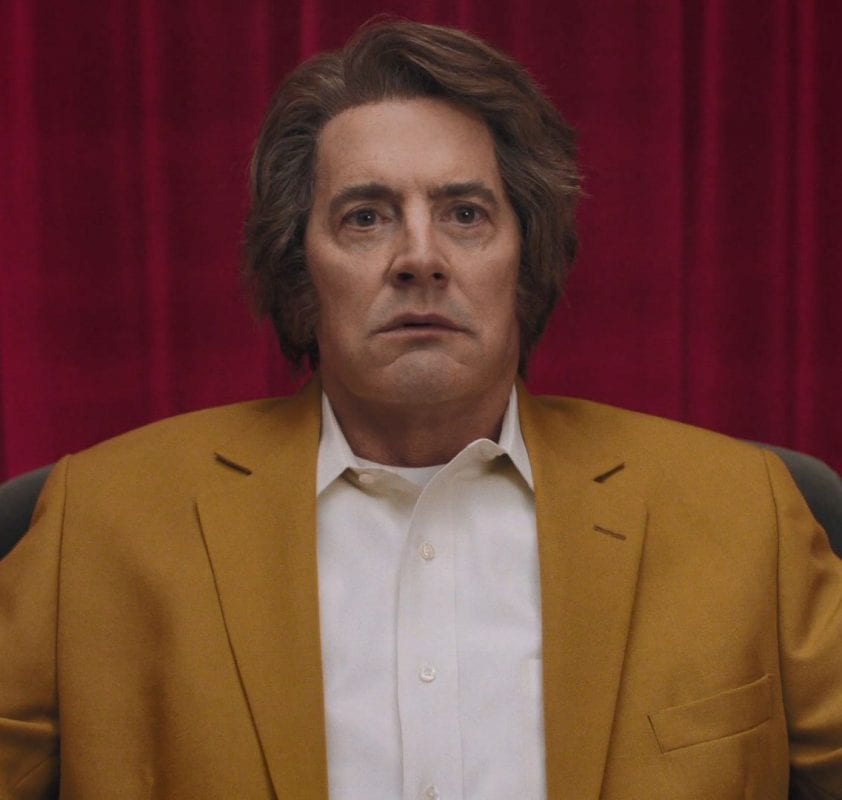 Why so long? Why was he created then? And by whom? We assume that it was Mr C who did the conjuring.  Creating a replacement for himself so that he didn’t have to return to the Black Lodge and burn for eternity. I suppose Mr.C wanted him in place long enough not to arouse suspicion. In that time Dougie was able to woo a beautiful woman, get married, have a child (assuming Sonny-Jim is his – can Tulpas breed? It seems that Doppelgangers can so I’m not writing it off), and keep a stable job.

It seems a little suss to me though that the one person he’d take as a wife would be the sister of Diane. Diane, who had already suffered dreadfully at the hands of Mr.C/BOB. Did he do this just to stick the knife in? Or was Dougie as much a dreamchild of Dale?

Let’s face it the Dougie we met briefly was not a great catch – and I can’t quite see Janey-E falling head over heels for that guy. I can, however, imagine her falling head over heels in love with Dale Cooper. So is that who she really fell in love with?  I’m not saying that she fell in love with THE Dale Cooper, but someone much more like him. I wonder if the Tulpa’s traits become more exaggerated over time in our world? Slowly rotting from the inside out.

Diane, before we knew of her, was described by Cooper in ‘My Life My Tapes’ as an interesting cross between a Saint and a Cabaret Singer. Tulpa Diane was way more Cabaret Sinner than Saint, but I imagine that she wasn’t always that way.  Most folks would put her personality demise down to her sexual assault and subsequent alcohol abuse. Indeed the very act turned her into someone else, a traumatised shell of her former self, at least on the surface. But Diane was conjured up before Dougie Jones.

Mr. C in the guise of Cooper turned up at the real Diane’s house around 4 years after his disappearance.  She could tell it wasn’t him when he kissed her and his demon smile imprinted on her soul, the impact of what he did to her that night remained even upon the version of her created, presumably, like Dougie, by Mr.C himself.

She was whisked away that night to the Convenience Store where she was swapped and imprisoned in another body? Or was she saved? Naido lived not at The Black Lodge nor at the Store, but somehow she remained at The Fireman’s place.  It’s no coincidence that the other person to live there was American Girl a.k.a. Ronette Pulaski – one of the few surviving people to witness the true face of BOB. Were they both kept there for their safety by The Fireman? Her life was in immediate danger and what better way to avoid revenge than to don a disguise and hide?  Andy was told that Naido was ‘very important’ by The Fireman and that ‘they’ were trying to get her.  I don’t think Mr.C knew what he was looking for – but the co-ordinates led him to exactly the place where Naido was dropped from the sky. The place where she’d been stored, the place where Dale also found himself after being thrown from the lodge – nonexistence. 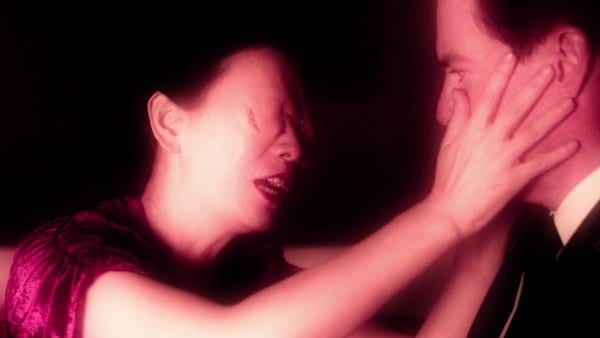 Perhaps the anger was borne out of love? Was Diane worried that her sister would be hurt by this imposter? She must have known something was not quite right. Can Tulpas detect others? She seemed to be aware of what she was before she literally popped off. Did Janey just think her sister was jealous?

Janey seemed to have it all.  The man, the marriage, the house, the child. But it wasn’t all it was cracked up to be for her either.  Dougie soon turned out to be a useless husband and father, one who would go missing for days at a time at the casino, spending their hard-earned cash on gambling and other women. Putting his and their lives at risk of death by gangster.  He had ‘moments’ enough times that she didn’t even really notice the catatonic state her husband became when he swapped for the real Dale Cooper.

Janey was the brains, the brawn and the boss of the family. She had to be, she held their world together. She had not expected her life to turn out like this, but she carried on anyway out of love for him and her son, for the hope of better times.  Then one day they came. Her patience paid off.

She was imprisoned in her own life so we would forgive her for daydreaming about a sculpted adonis appearing before her.  Sometimes a fantasy world is the warmest place on earth. 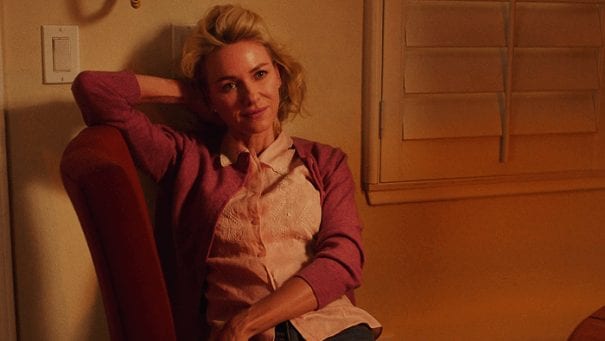 The love she made to who she thought was her husband, the real Dale Cooper at this point, was in stark contrast to her sisters moments with the same man. Janey used the power of her mind to conjure up the greatest orgasm of her life—Cooper was a willing, grinning participant but played a small part in this.  Diane, however, was unable fantasize in the same way, or reach the same heights, no matter how hard she tried.  Cooper played a similar nonparticipating role, but she was broken, she couldn’t undo what he’d done to her. Couldn’t unsee his grinning face, no matter how much she tried to cover it up.

There is a moment, just as Cooper leaves the Black Lodge and meets the real Diane at Glastonberry Grove that has stuck in my mind. As he walks along the corridor, he waves his hand and the curtains open.  His footsteps though, they are those of the catatonic, coffee chasing Dougie-Cooper. It was like an amalgamation of all his persona’s rolled into one stepped out from behind the curtain for the final call. I think that Diane saw this, she hoped for her true love Dale to return, and he did, very briefly for one kiss—but the man who came out of the Lodge was different. A man with a mission, a man with many flaws, a great lawman but not a great man. A man who did not need anything, he wanted it. His intentions were pure, his actions were cold. 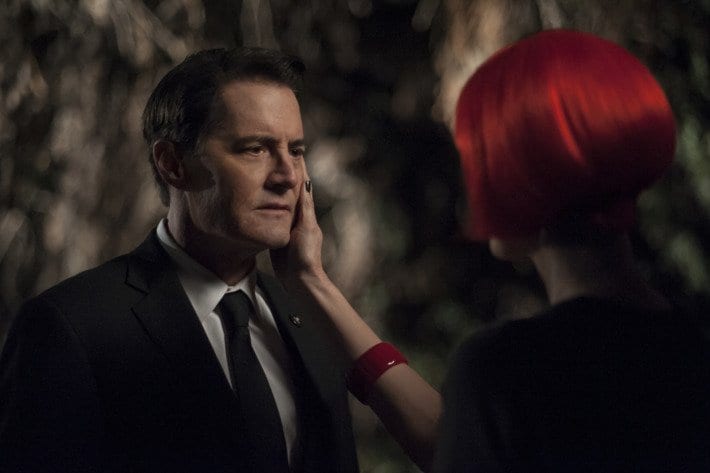 It is hard to know whether this was ‘our’ Dale that left the Lodge and went onto become Richard in Odessa. It’s a fairytale fantasy of mine that the real Dale was the man who ended up on Janey-E’s doorstep in Las Vegas, settling down with an honourable wife and child—after all she deserved that happiness, the kind of happiness only the real Dale could bring. But that would have been selfish, wouldn’t it? Sending a manufactured version of himself to do his dirty work whilst he played happy families? 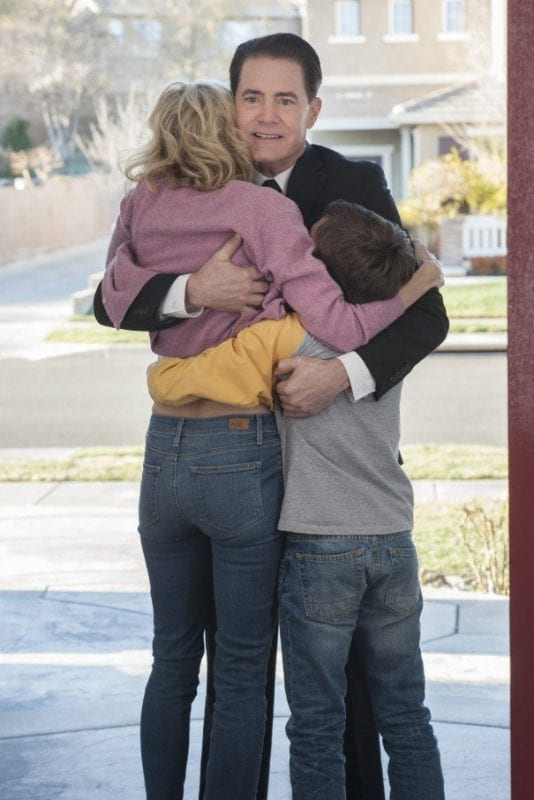 If Dale really loved Diane how could he do that to her? Even sending a gorgeous Tulpa version of himself to live happily ever with her sister would’ve felt cruel to Diane. She was left alone, wandering in another place and time, not knowing who, where or when she was. He didn’t even attempt to find her.

Of course we don’t know what the reason between their fall out really was, I doubt we ever will! Two very strong women, both would’ve fought to the death for their man. But which one did Dale choose? Did they both win or did they both lose?