Perusing a call for papers for my day job, Twin Peaks ever on my mind, I stumbled upon a fascinating topic. It is “Mothers, Motherhood, and Mothering in Popular Culture.” As most of us would agree, Sarah Palmer is one of the most complicated mothers in television history, and that fact began to turn my mind to the collective mothers in Twin Peaks. “You better hurry; my mother is coming!”

In my quick research on the subject, I immediately stumbled upon two characters of folklore that I think are potentially potent in relation to Twin Peaks mythology, the Corn Mother and the Elder Mother. I am going to look at each. Before examining those folklores, I would like to look at mothers across the series.

Immediately after our introduction to the face of Laura Palmer in the original pilot, we see our first established mother in Sarah Palmer. She is a sign of settled, middle-class life in the late 1980’s as she nonchalantly smokes her morning cigarettes inside the kitchen, her husband away to work, she responsible for seeing her daughter out of the house to school. Little did we know that her well-rehearsed, then desperate, wake-up calls to her 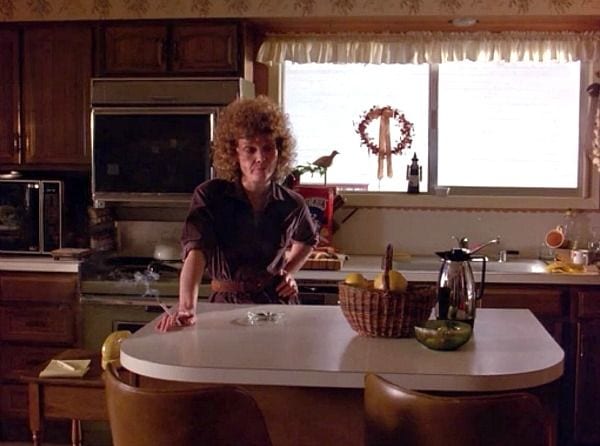 daughter that morning would literally echo through time and in memory. Her first phone call is to our second established mother in Betty Briggs. Betty attends lovingly to her husband with a shoulder massage as he reads his newspaper. She is responsible, answering Sarah Palmer directly, confidently, trusting in daily routines. And, perhaps, shortly after that moment, we see our first instant of the absent mother in Audrey Horne’s chauffeur. This brings us to Sylvia Horne. While I am willing to say that she is mostly absent for Audrey as established by what we see, she is very present in Johnny’s life. Of course, Susan Hurley leaves too little for James in the show and us as an audience. Then, there is the hypercritical mother come home in Norma’s case with hers and Annie’s mother, Vivian Nyles and so on.

Where are we with each? Their children are nearing the end of the latch-key or “day orphan” era. And while Sarah, Eileen, Betty, and Sylvia by all evidence appear to be housewives, their children seem to be living lives extremely independent of their ever-present mothers. Secrets being what they are in Twin Peaks, they are all living their secret lives among the trees. In The Return, we have Shelley as a working mother, watching her daughter live through an all-too familiar abusive marriage. Doris Truman is exasperated in the aftermath of losing her son to war. Sarah is now the grieving mother, haunted by tragedy, hosting what some assume to be a malevolent ‘mother’. There is the “1-1-9” yelling mother in Las Vegas, who is caught up in America’s addiction epidemic. In a world of red balloons, hers and her son’s has lost its optimistic buoyancy. Lucy is the proud mother of Wally Brando, a thoughtful, yet wayward highwayman. Dare I mention Audrey Horne, mother of Richard Horne? In Twin Peaks: The Return, the Blue Rose Taskforce should never forget that Mother is coming.

In looking at a mother’s characteristics, three familiar words get strung together as attributed to Jung: safety, care, and protection. Those are base characteristics. I was interested in noting further mother symbols as well. Reaching for the closest and yet a favorite reference in J.E. Cirlot’s A Dictionary of Symbols, I looked for mentions of mothers. I attached to some instances more than others. Let us note first, the forest. Cirlot states:

“Forest symbolism is complex, but it is connected at all levels with the symbolism of the female principle or of the Great Mother.”

As we have this reference to the forest and the Great Mother, I was inclined to follow that lead with the entry for the Great Mother. Here it is stated that, “The Great Mother corresponds to certain female deities …” Could we fit The Experiment in here, where there was an identifiable female build? Continued: “It is usually considered to be a symbol of the fertilized earth …” What do we see The Experiment, some ascribe to as Mother, do out of nonexistence in Part 8 but fertilize? Fertilization leads us to the Corn Mother.

Most of us are well familiar with corn’s earliest significance to the mythology of Twin Peaks. There was Mrs. Tremond’s request for no creamed corn in her Meals on Wheels dinner in season 2 to the “pain and sorrow” of garmonbozia in Fire Walk with Me, not to forget the DoppelCoop’s rather gnarly regurgitation in The Return part 2. Without collecting every corn sighting or significance in the series here, it’s worth noting that when we look to the symbols, metaphors, and allusions of Twin Peaks, we must almost certainly look to American Indian interpretations. I’m focusing here on the tale of the Corn Mother, a legend in its various renditions as one predominantly of self-sacrifice. I expected more of a story of fertility and life (yellow corn) in learning of the Corn Mother, and while that is not absent entirely, I was surprised to find a story of death. This, of course, made me think of Hawk’s map and black corn, death.

According to George Tinker’s essay “Jesus, Corn Mother, and Conquest: Christiology and Colonialism” in Native American Religious Identity: Unforgotten Gods as edited by Jace Weaver, the story of the Corn Mother is told “ … from the east coast of Canada throughout eastern North America to Florida and as far west as the Keresan Pueblos in New Mexico” (150). While not the Northwest, Twin Peaks now takes into consideration South Dakota, Texas, New Mexico, Buenos Aires, and even Paris. The Corn Mother, wherever she is considered, is also known as the First Mother. As I watched The Return, I could not get the image out of my head of The Experiment as a first or dominate mother of our Lodge denizens, and while I am not ready to marry that theory, the Corn Mother gives me food for thought (joke not intended). In the narrative of the Corn Mother, while her flesh feeds the fields, self-sacrifice is the key. As Tinker explains:

“The first experience of death by the people in the death of Corn Mother teaches also the truth of the old saying attributed to Seattle: ‘There is no death, only a change of worlds’” (Weaver 152).

In a wave of quotes, let me also leave this from American Indian Myths and Legends, edited by Richard Erdoes and Alfonzo Ortiz from a Penobscot rendition of the story, “’Yet she is not dead, she lives: in undying love she renews herself again and again’” (13). Cirlot has a note on corn of seven colors: “… fire is represented by red and orange, air by yellow, both green and violet represent water, and black or ochre represent earth.” With Hawk’s black corn in mind, we are back to the earth, forests, and the Great Mother, and so we look to the Elder Mother.

While not a popular tale necessarily, the Elder Mother likely receives most of her 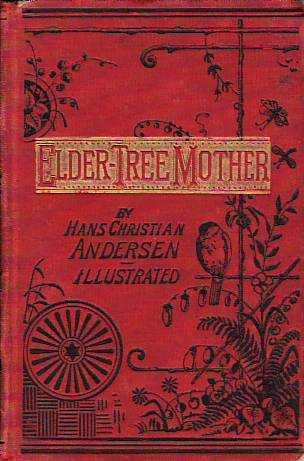 attention from Hans Christian Anderson’s story “The Little Elder-Tree Mother” from 1845. In this story a little boy gets sick from getting his feet wet. A kind old man comes down to tell him a story. While the Romans and Greeks called her a Dryad, the old man tells the boy they shall understand better the Elder-Tree Mother. The boy is told a tale of a Golden Wedding that makes little sense to him until the Elder Mother, reduced to a girl his age, picks him up and carries him through a long life with her until he is an old man and she an old woman, remembering their Golden Wedding beneath the Elder Tree. She then reveals to him that her real name is “Remembrance.”

To this point, we aren’t connecting many dots, but according to Myths and Legends of Flowers, Trees, Fruits, and Plants: in All Ages and in All Climes by Charles Skinner,

“In Denmark Hulda lived in the root of an elder , hence the tree was appropriately her symbol … If the forbidden wood is used in buildings, the occupant will presently complain that mysterious hands are pulling up his legs. The dwarf variety is believed by some to grow only where human blood has been shed, and in Welsh its name signifies plant-of-the-blood-of-men.” (Skinner 105)

That might not connect much either, but I am left thinking of the Woodsmen appearing when DoppelCoop is shot and the strange ritual to restore him. Furthering on the Woodsmen, according to the Wikipedia page—I bought a copy of Charolette Burne’s The Handbook of Folklore to confirm it—“in various parts of England and Scandinavia that to take wood from the elder tree one would have to ask the Elder Mother first, or else ill luck would befall the woodsman. The woodsman would have to ask the Elder Mother like so: “Old girl, give me some of thy wood and I will give thee some of mine when I grow into a tree.” (Burne 34) In another tale, if someone took the wood from her without asking, she would pinch them “a’most black in t’ face.”  The exploration leaves one wanting more research and more time to digest it, but in Twin Peaks there are many more mothers to explore and elaborate on. There is a famous quote by William Makepeace Thackeray that goes “Mother is the name for God in the lips and hearts of little children.” (Maybe you remember Brandon Lee quoting it in The Crow.) That may be the key we need to look to in thinking through these examples. These mothers were all gods to their children once, the potency of which is enhanced by the forest that surrounds them in the Great Mother with all of her dangers and mysteries.

Burne, Charlotte Sophia. The Handbook of Folklore. Revised and enlarged ed., Published for the Folk-Lore Society by Sidgwick &Amp; Jackson, 1914.

Skinner, Charles. Myths and Legends of Flowers, Trees, Fruits, and Plants: in All Ages and in All Climes. J.B. Lippincott, 1925.