If you’ve been on social media at all over the past few days, you’ll surely have seen the tweets and posts with “119” over pictures of Twin Peaks characters or locations as well #oneonenine. Thursday, November 9th turned out to be an all day love fest amongst Twin Peaks fans, as well as the cast and crew. I had the chance to sit down with Kenneth Phillips and Blake Morrow who created this viral movement to see what it meant to them, how successful they felt it was and more. (Andrew’s note: Many of you may know Blake already from his #ReturnToTwinPeaks photo series. If you haven’t seen his work before, it’s worth checking out 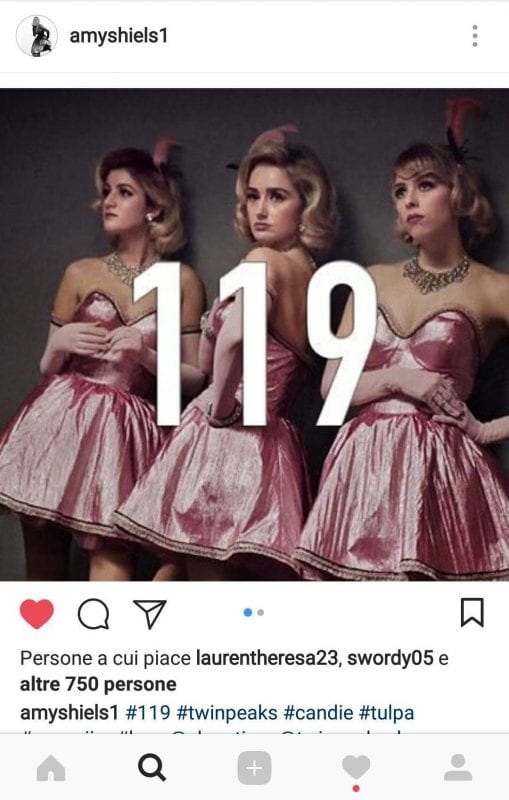 Kenneth: About two months ago, I had this insane idea that I wanted to throw a one-off East coast Twin Peaks event. After weeks of research, I came to the conclusion I did not have the time or resources to create the said spectacle. My brain was not happy nor satisfied. I needed to say thank you. So, 119 shouted in my head (as it should) So I wondered, what could I do with said numbers? So far in 2017, every month we’ve been given a little treat related to the show. I was aware of the “will they or will they not” green light a new adventure. I figured Boxed Set sales will be mighty crucial to this decision. But that’s in December. So what? No treats for November? Boom! My brain created the image 11/9. I knew right there and then. Now, I knew, I needed a partner in crime. Blake was the first person that popped in my mind. I didn’t know anyone else that purely loved the series as much as I did. His photography work spoke exactly of how I felt about it. He recreated that Twin Peaks feeling I had. So, of course, I hit him up. He was in on the spot. My mind’s eye was guiding me through it all.

Blake: Kenneth mentioned the date to me that was coming up and suggested we do something to get fans rallied together to ask for more. I designed a sharable series of images from season three with 119 on them. We kinda brainstormed back and forth for a while on how to get social media on it and figured that once we put the idea out there, hopefully people would run with it! Kenneth, does that sound like how it went down?

Kenneth: I had faith in the fan base.

Blake: Kenneth kidding around with me that he was Frost and I was Lynch for this idea, but I think we kept switching roles throughout. 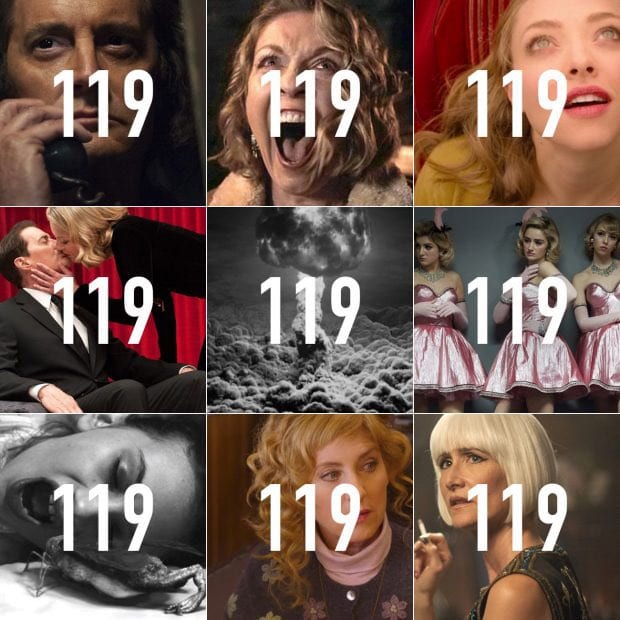 Blake: Kenneth and I met at the 2017 US Fan Fest from this past summer and stayed in touch. I ended up going to the UK Fest in October as well as the Festival of Disruption in LA. It’s been a fascinating and rewarding time getting to know so many cool people in the fandom. We also contacted different stars from the show like George Griffith, who were more than happy to jump in and tweet as well. I love that the cast and crew of Peaks are true fans themselves. Thanks to the Fest we’ve gone to, the stars end up being really accessible and easy to chat with.

Kenneth: It is very true that wonderful crew, such lovely people. I’ve loved the show since I was 11 years old. I lived in Europe when it premiered. I watched the 2 hour series premiere in 5 languages. I was hooked. Then I moved to the U.S. The very 1st movie I purchased through pay per view at the time, was FWWM. The film had just been released for home viewing. Then the boxed set came up. I saved my paycheck monies in high school to get it. I must’ve watched the series dozens of times. In college, I converted so many people. I’ve even converted people with just the soundtrack!

Blake:[Laughs] very similar for me. I had all of the episodes of season one and two taped on VHS and gave the tapes to different friends in high school to get addicted. (Laughs) Multiple episodes on VHS- early TV binge-watching.

25YL: That’s a really cool story about how the two of you met at a convention and stayed in touch. That’s something I love about our community. Had the two of you discussed any other projects to collaborate on before or was this a first for you?

Blake: This was the first project we’ve collaborated on. We were so stoked with seeing fans jump on board and get excited about it online that we’re already thinking about a second 119 Day to happen on January 19th, 2018. I loved seeing people take our number template and add their own images, or creating whole new imagery out of their own art.

Kenneth: We have so many fun ideas to make it more interactive.

25YL: Let’s talk about the online reaction. Did you have any goals or expectations and if you did, were they met?

Blake: I think we both had high hopes, for sure. Right K?

Kenneth: Well, I said, if it works awesome. If it doesn’t, that’s ok. Then it happened. I did not expect it to become as incredible as it did — all guerrilla style.

Blake: Yup. We figured if it didn’t really catch on, then hey—we tried, no harm done! 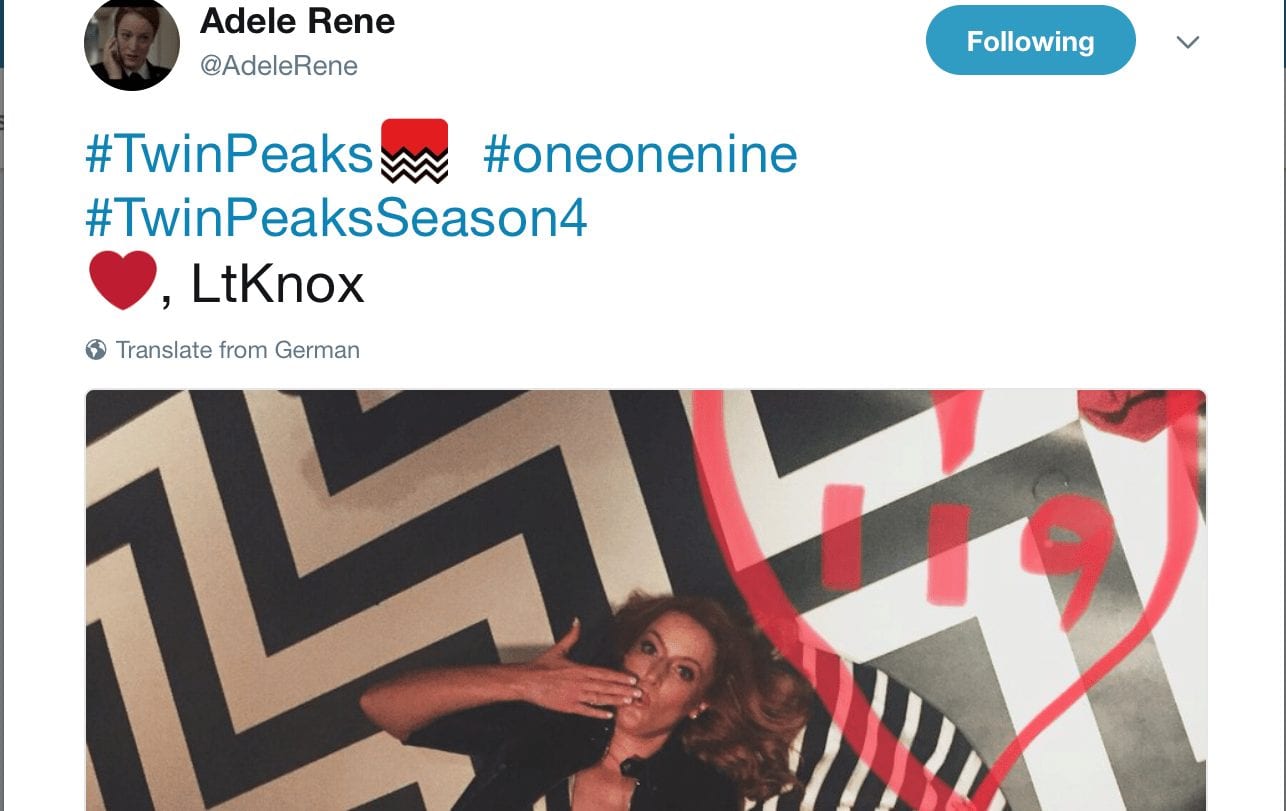 Blake: Funny story; a day before the 9th, we realized that #119 isn’t actually a hashtag that works! We literally chose an unhashtagable hashtag. Our hashtag was NON-EXISTENT! This dawned on us, and we texted each other back and forth laughing our asses off—very Lynchian, we thought.

Kenneth: We worried for a second and then I embraced it. I quickly went back online and started making the spelled-out version our thing.

Blake: Thankfully, we got the word out for people to also use #oneonenine as well in our social media circles. It was mainly an issue on Twitter, as it worked ok on Instagram. 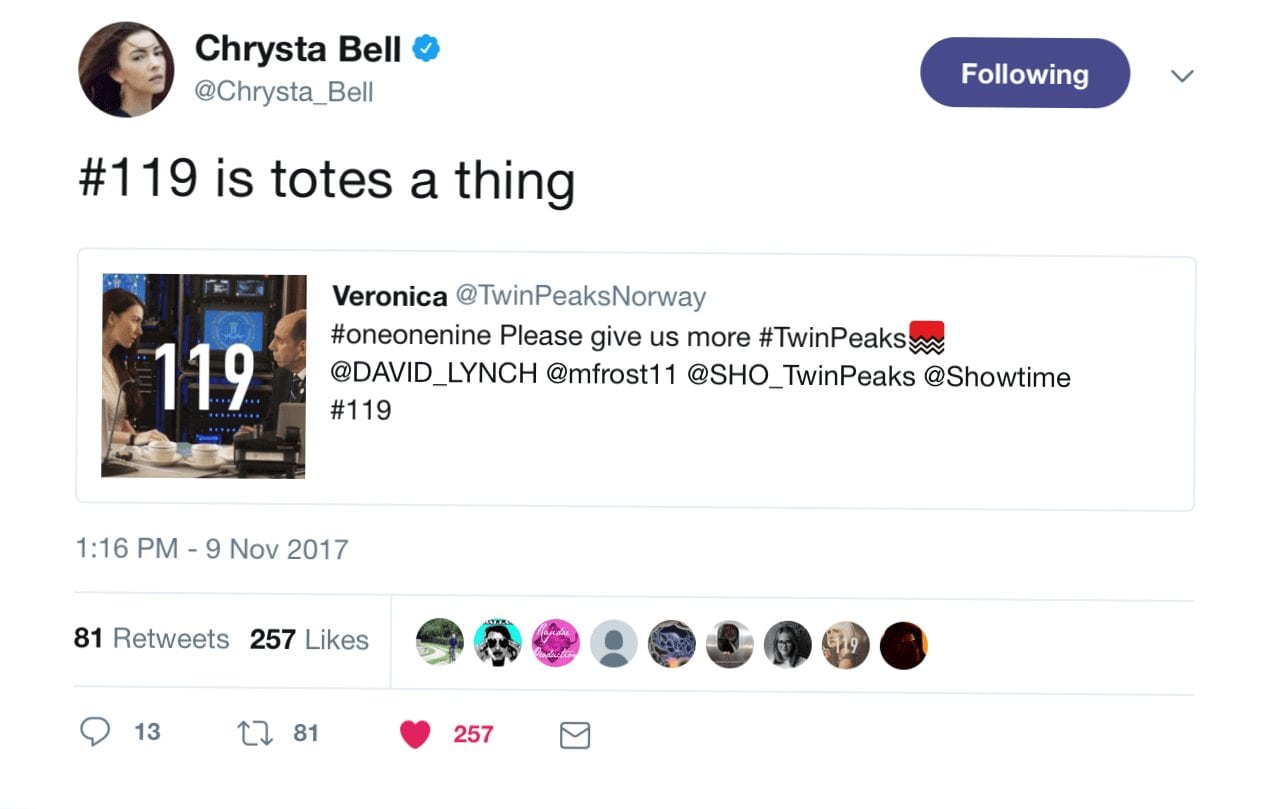 25YL: Let’s backtrack a bit. For those that were perhaps off social media last week, what was 119 all about?

Blake: That’s the best part, Andrew! Who knows? For us, it was a call for help, but the interpretation is open. We saw it as the perfect call to unite and say both “thank you” to Frost/Lynch, Sabrina Sutherland, their cast and crew, and Showtime for taking on the 3rd season but also, “We will totally support more if you have more Twin Peaks stories to tell.”

25YL: What do you think the campaign succeeded in doing? I know I shared what I thought was achieved, but I’d like to hear your interpretation.

Blake: I know I wanted Showtime to see that fans are heavily invested in the Twin Peaks mythos and there is so much more they can do if the interest is there to cultivate it. I love that Sabrina said she hoped Showtime saw it; that really spoke to me that a fan movement really does make the difference between “yes” and “no” for all parties involved. I just hoped that we’ve helped tip the scales to favour continued creativity!

Kenneth: My hope was just to give a little a nudge to everyone involved. All parties have expressed interest. Season 3 was the most amazing audiovisual art I have ever experienced. And, to me, it has always been about the feels. I trust David, Mark and Sabrina that if we get one more, it will be not what we expect. It will be precisely what we need. SHOWTIME is who we need to swoon. And I can be very romantic if I need to be [laughs]. Sabrina has been a powerful voice for the show. I hope she knows that we stand behind her. 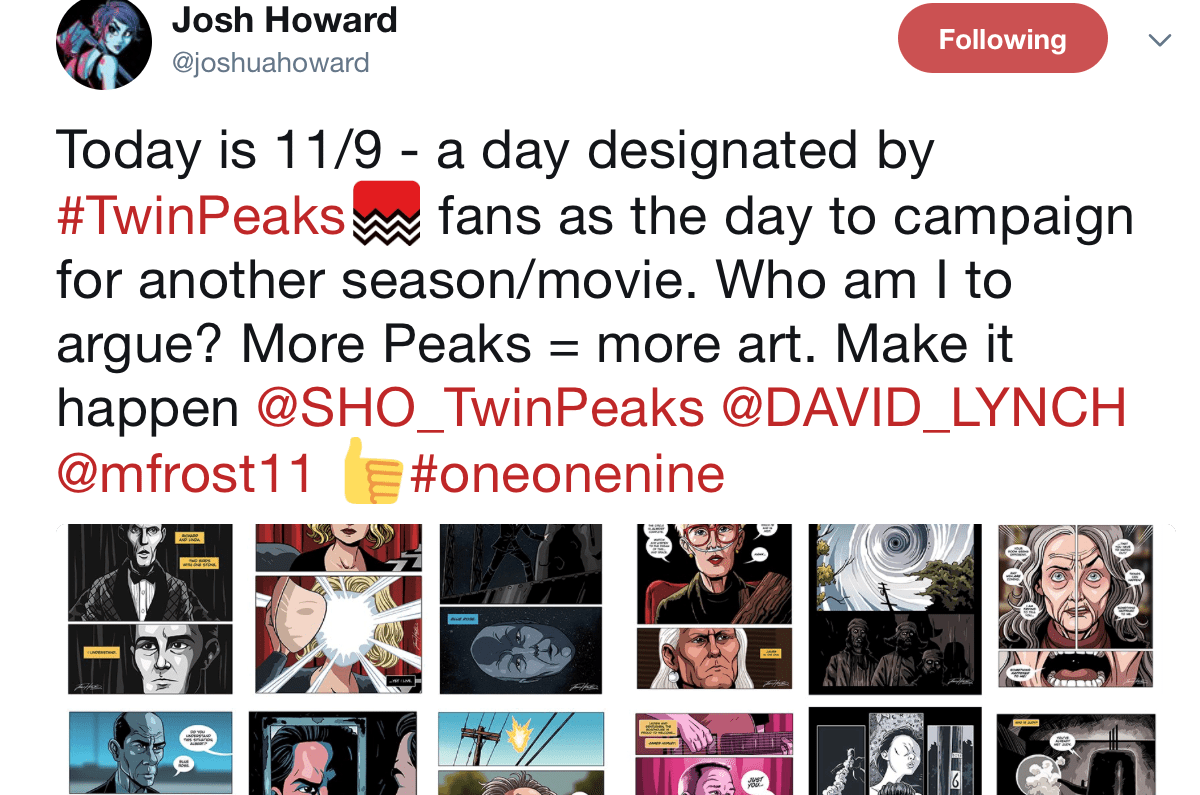 25YL: Any shout outs you guys would like to give to those that helped put this all together?

Blake: I reached out to Rinaldo Zoontjes, and he created his 119 woman image specifically for the day.

George Griffith tweeted throughout the whole day and made his own visuals. Several other cast members also tweeted about it, which was really cool. Matteo Marino reached out to me to get the details and also put all of the images we made on his website. http://www.davidlynch.it/call-for-help-119-campaign-for-twin-peaks-season-4/

I also made all of the images we made available on my FB artist page but Matteo really embraced what we were doing and I’m sure it helped get the word out. Also, incredible illustrator Chris Vector wanted to help out but didn’t have a lot of time to create something,

Huge thanks to both the US Fest and the UK Fest for helping to get the word out as well as Blue Rose magazine. Honestly, it takes a village and fans really got behind this because our agenda was pure—-saying thank you and asking for more. We just wanted to help give the fans a day to unite and voice appreciation. It wasn’t about elevating ourselves, or a fest, or a website. It was a lovely and pure way to be fans, you know? 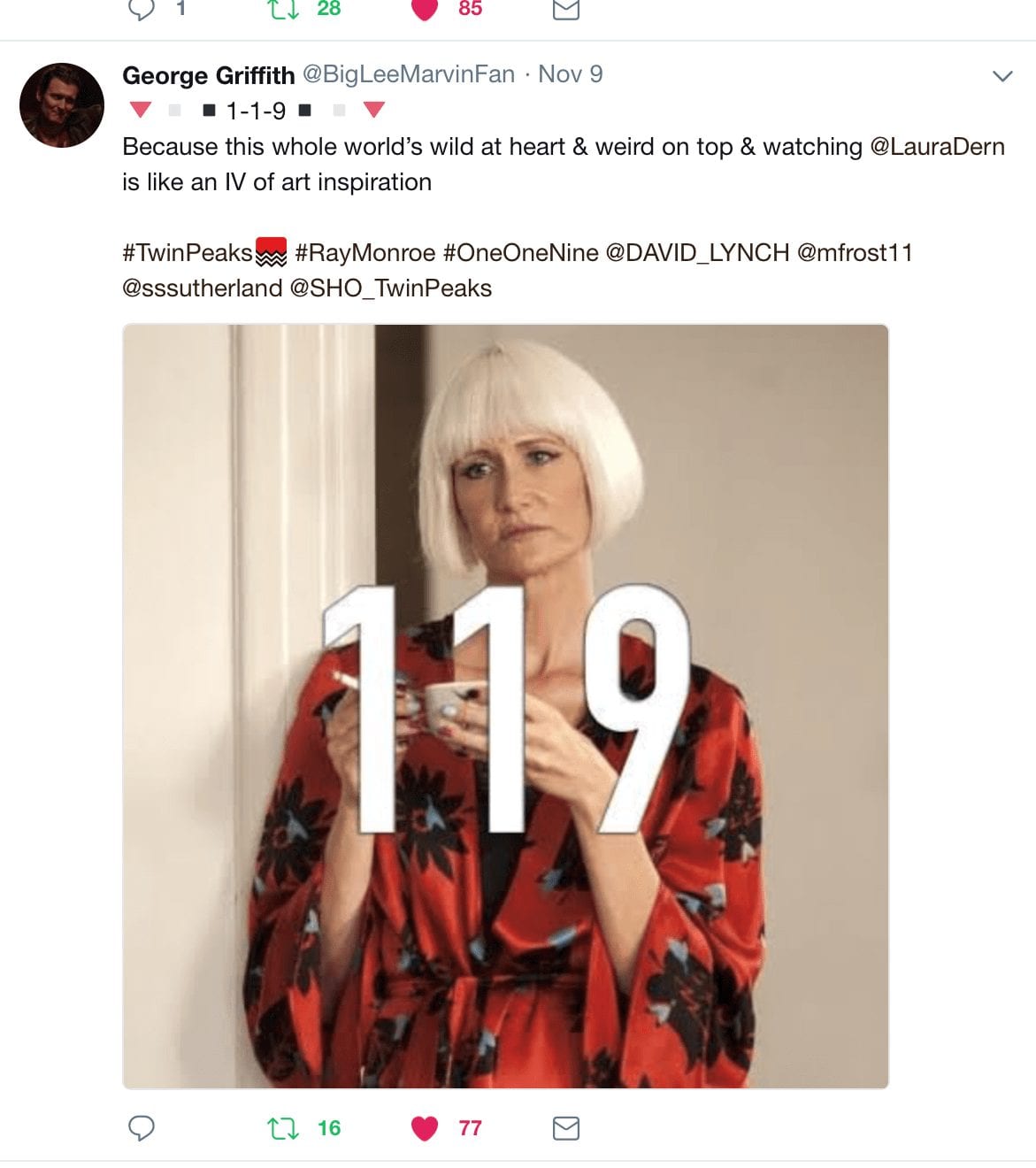 25YL: Any final thoughts or anything about the next 119 Day you would like to say?

Thanks so much to Blake and Kenneth for taking the time to talk to me! Be sure to keep an eye on social media for updates on the next “119” day and be sure to check out the link at the top of this interview to see Blake’s photography! Until next time…

If you enjoyed this interview, please check out some of our others!

Lynching Television (again) – a conversation with Sabrina Sutherland about Twin Peaks: The Return By Andreas Halskov

My Interview With John Pirruccello