In 1990, Twin Peaks introduced Harold Smith in The Secret Diary of Laura Palmer. An overly simplistic character description is that Harold was an agoraphobic who befriended others, encouraging them to help him live by bringing the outside world in. He brought Laura in through the Meal on Wheels program, and eventually brought Donna Hayward in as she investigated Laura’s death.  His life’s tragic end following Donna’s and Maddy’s attempted theft of Laura’s secret diary still resonates with me today…

When he brought others into the world he created inside his bungalow, he asked them to contribute to his “living novel.” The novel was a series of narratives that, when tied together, were designed to create an ornate tapestry of a world he could no longer be a part of.

With this project, Une Âme Solitaire: Fans in a Living Novel, I am creating a tapestry of interconnected Twin Peaks experiences from fans that I have encountered over the past 27 years.   Some that we will meet here are known; some unknown, and all will be hard to forget. They have dreams and some dreams that have come true. They are friends, and I will share them and their stories with you now…

“My mother still jokes today that my interest in Twin Peaks is “just a phase” that will eventually pass.”

Steven Miller didn’t find Twin Peaks on a television in April 1990.   Instead, he found it in 1993 by checking out the Wild at Heart soundtrack at his local library in Grove City, Ohio. After following the path back to Angelo Badalamenti’s Twin Peaks soundtrack, he found the series’ pilot episode and first season, and was hooked. The allure of a small town with a dark underbelly was irresistible to Steven, just as it was to me in 1990. Playing hooky to watch the first season and becoming a teen Agent Cooper (complete with overconsumption of coffee, pie, and donuts) was just part of the viewing experience for him.

Unfortunately, like many fans who found the series after the initial run was complete, Steven ran into some personal continuity issues, mistakenly jumping from the Season 1 finale to a VHS copy of Twin Peaks: Fire Walk with Me, thus spoiling the big mystery that had been on the lips of all who watched the original series on ABC.  With Bravo’s re-airing of the original series in 1993 as part of the network’s “TV Too Good for TV” stretch, and a VHS copy of the entire series, things got back on track, leading to:

“Diane, It’s August 1994, and I just held my first “Return to the Black Lodge” – a 29 1/2 hour marathon where I showed the pilot, all 29 episodes, and “Twin Peaks: Fire Walk With Me.” My friends and I decorated my parent’s basement like the Red Room and watched the entire series from Noon on Saturday through 5:30 p.m. on Sunday. To this day, every time I watch Twin Peaks: Fire Walk With Me, I’m left with that late Sunday afternoon vibe I first experienced during those marathons.”

**A special note: Twin Peaks legends John Thorne and Craig Miller published details of the marathons in Wrapped in Plastic.

Steven’s Twin Peaks cosplay game is strong.  Beginning with turns as Special Agent Chester Desmond at those Red Room parties, he’s felt just as comfortable becoming Harold Smith at the 1996 Twin Peaks Festival as becoming Gordon Cole in 2017.  Cole’s developed into his go-to persona in recent years due to Steven’s increasingly prominent (and distinguished!) grey hair. Time waits for nobody in Twin Peaks, right?  Like me, he does have a soft spot for the muted earth tones worn regularly by Big Ed and Pete Martell, and he’s even sported some Dr. Jacoby glasses, as evidenced by his 1996 Festival genuflection next to Russ Tamblyn.

Steven and Russ Tamblyn at the 1996 Twin Peaks Festival in Washington. 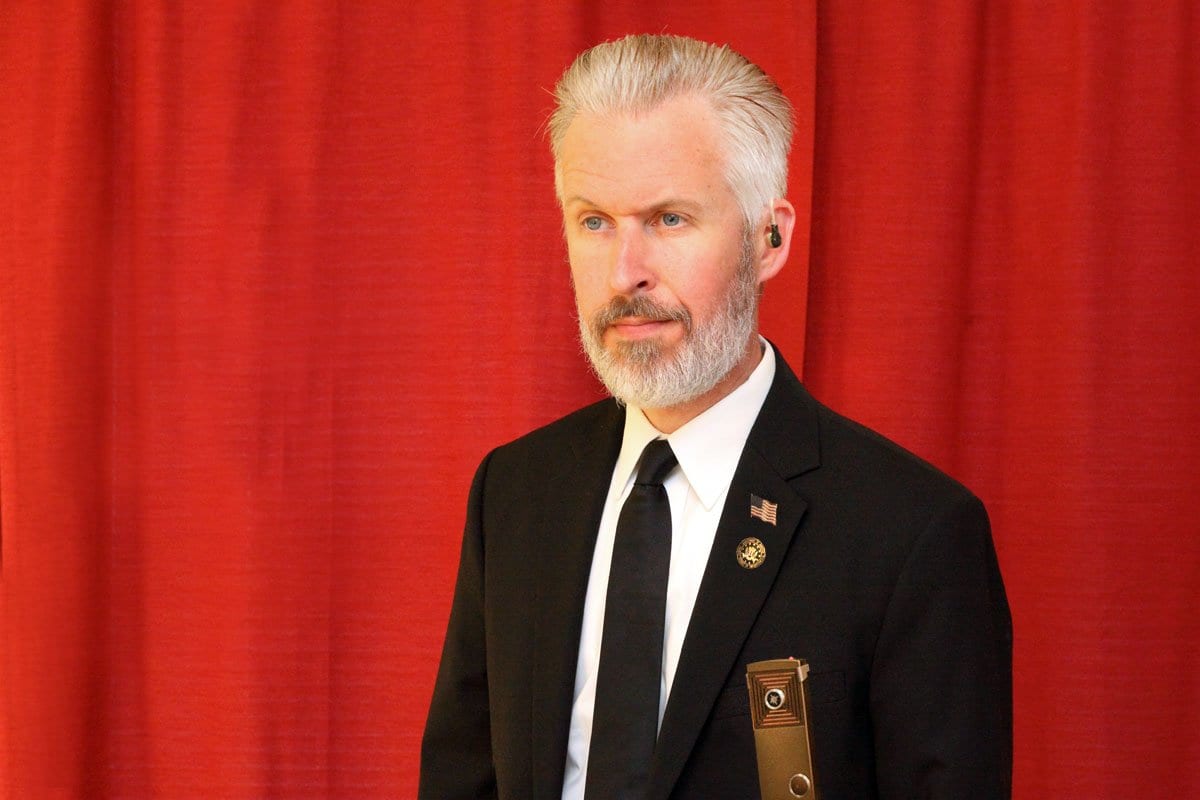 While his initial out-of-sequence viewing of Fire Walk with Me initially may have thrown Steven into a time-altering loop, the film has made a lasting impression on him.  He calls the film’s first thirty minutes his favorite part among the original run, the film, and Season 3.  From new characters, new jazz, and a beautiful shot of Agent Desmond gazing toward the Fat Trout Trailer Park utility pole at dusk, it’s made an indelible impression on him, and that was all he had to hold on to until The Missing Pieces’ release in 2014.

Over the next twenty years, Steven’s interest has remained strong, and he was just as surprised as the rest of us when Twin Peaks returned to Showtime earlier this year. He watched it live with his fiancée each Sunday night, and completed on-demand re-watches later that same evening. One thing that struck him during the Limited Event Series was the increased use of silence, similar to its use in Fire Walk with Me. Focusing on the silence allowed him to “slow down [the] viewing experience, increasing the tension felt in many scenes.” He views Season 3 as a stunning work of art, while he viewed the original series as more of a primetime soap opera. From his perspective, Mark Frost and David Lynch successfully combined some of the same soap opera components with Fire Walk with Me’s darker reality through their teamwork on Season 3.

When initially looking at what makes Steven such a special fan, I had to think about what he brought to the table on Twitter during Season 3.   He seemed to have a true sixth sense for finding the shooting locations within hours of a part airing on Showtime. When I asked him to tell me about how he did that, he was effusive in his praise of those who had gone before him, namely “Jerry Horne” from Twin Peaks Archive, Brad Dukes, Travis Blue, and Pieter Dom from the Welcome to Twin Peaks site. The now-defunct In Twin Peaks website was such an invaluable tool when he visited several original film sites in southern California. He is also grateful for his fiancée, who is patient when he gets “lost in the woods.”

For Season 3, he used Google Maps and intuition. “The One-Armed Man once said, ‘You have all the clues you need.’ That’s my secret. I look for clues and have a tremendous amount of persistence. I’ve spent time in southern California so I’m familiar with the terrain, particularly in the desert.  Joshua Tree National Park is my favorite place in the world.”

He found Mr. C’s car crash site by spotting a distant ACE Hardware store logo in the back of one of the shots.  He says he looked at nearly every ACE Hardware location via Google Maps for a spot that matched.

For the establishing shot of Diane’s apartment, he figured they must have used stock video footage.  Because it was such a quick shot, he felt that it seemed more cost effective to buy footage versus sending a film crew.  He explored nearly every street via Google Street View in the Brooklyn/Prospect Park area until he found it.  The clue was the gargoyle-like figure above the door.  There was much rejoicing in his home the day he found it!

“I’m still searching for the establishing shot of Experiment/Glass Box building from Part One, and the “giant rock road” Mr. C and Richard Horne visit.  I would also love to find the establishing shot and interior of Harold Smith’s place in Twin Peaks: Fire Walk With Me as well as the album cover seen in Diane’s apartment in Season 3. I’m still on the hunt for that one as well.”

Steven Miller is just the beginning. There are many rooms in this Twin Peaks fan “house,” each alike…but occupied by different souls night after night! Next time: My Special Facebook Agent.”

Steven shares, “I love connecting with other Twin Peaks fans on social media!  From 1996 to the early 2000s, I ran a Twin Peaks fan site called ‘The Great Northern Hotel.’  I still have emails and notes from people all over the world I met via that site long before Twitter was a thing.  Today, you can find me on Twitter and Instagram by searching @SamHowzit.  You can also find me on Facebook at Facebook.com/SamHowzit “