In my previous living novel column, we met Ben (@beanorojo on Twitter), who shepherded me through the 2017 Twin Peaks Festival in Snoqualmie and North Bend, Washington. This week, I’d like to share another fan experience from that weekend, one from someone you may be slightly more familiar with. John Pirruccello portrayed corrupt Twin Peaks Sheriff’s Department deputy Chad Broxford during the Limited Event Series. When I met him at the Festival, he mentioned that he was a Twin Peaks fan long before getting the role of the person most fans love to hate.

“[The Twin Peaks Festival] was the highlight for me of [the “Summer of Twin Peaks”]. The premiere was great, and the wrap party was great, and all these things are wonderful as a community, but to go up and meet the fans in that way and have them be so generous and so open and so supportive…It’s weird because I’m not really a “joiner.” I wasn’t a boy scout, I didn’t play sports, so for me to kind of be in a place, there’s almost something “culty” potentially about it…relative to my own experience, and I just found it to absolutely be like a shot to my heart. It just filled me with love and optimism, and it was just a beautiful time.” 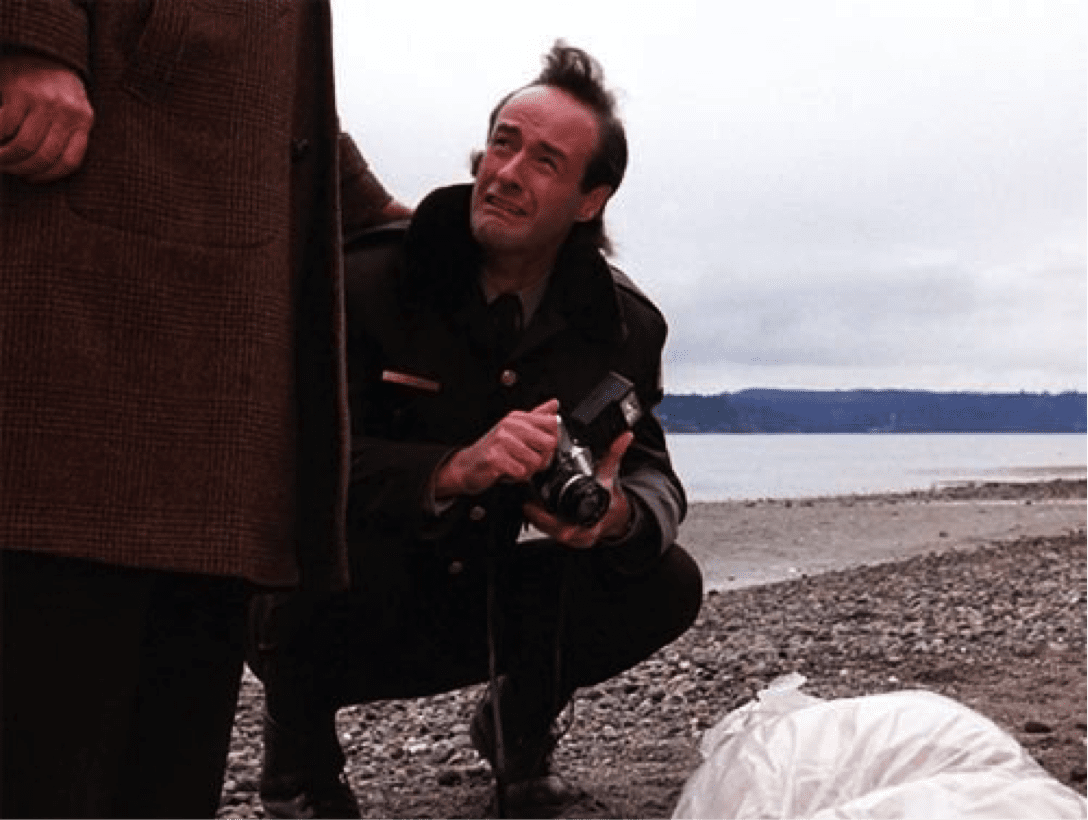 “To me, my love of Twin Peaks really starts when Andy Brennan starts crying.”

John remembers how Twin Peaks changed television for him in the 90s. He watched television from the moment it started broadcasting each day, and well into the night. He describes television viewers of the late 1980s and early 1990s as having a certain set of expectations; low expectations that were blown apart by something so different like Twin Peaks. When originally broadcast, he recalls Jack Nance’s iconic dialogue drawing him into the scene where Laura’s body is examined at the water’s edge. He feels that up until that moment, television police officers were typically Dragnet-macho tough guys, and that once Andy kneeled down and started crying, that changed everything. But for John, Special Agent Dale Cooper’s introduction was special, too.

“Cooper shows up, and is immediately unlike any peace officer we’ve ever seen on television. I was hooked from Episode 1.”

“To say that Twin Peaks blew my mind is a cliché. I feel the same way about Twin Peaks as I do about punk rock and the effect that punk rock had on me. Punk rock had this visceral energy that disrupted all that I thought was stale and uninteresting and rote as a young man. Punk rock came in and disrupted that and basically was a rebellious energy up against that status quo and Twin Peaks to me had the same effect, just a little more sophisticated. Punk rock didn’t really have the answer, just the problem. Twin Peaks kind of came in the same way and maybe had more of an answer… you don’t have to stay within the lines, and there are things outside of our view that we don’t understand and it’s OK to not understand. And that was new!”

While Twin Peaks captured his attention back in the early 1990s (more on that later), John dove deeper into David Lynch films after learning that has was cast in the new series. The gravity of what he was about to undertake was not lost on him! He watched Twin Peaks Seasons 1 and 2, Eraserhead, and The Elephant Man again so that he’d be better prepared to enter into Lynch’s world. That fall, John’s girlfriend Julie (John describes her as his “costume whisperer”) put together their Lynch-inspired costumes a couple of days before Halloween:

“I was [Henry Spencer] in Eraserhead and she was the Woman in the Radiator after I found out I had the role [of Chad]. She does this [costume prep] with a few days, like on the 29th of October. I was trying to live up to her standards by whipping that costume together as Cyril Pons for the Final Dossier reading.”

Thanks to Twin Peaks Executive Producer Sabrina Sutherland, we were able to view Part 12 at the Roadhouse during the 2017 Twin Peaks Festival. John’s thoughts about that evening:

“Obviously, It’s singular and nothing compares to it. It was absolutely magical and I felt privileged, actually. And I sat there and I was on the floor. That’s a humble thing, to be sitting on the floor of the Roadhouse, and I’m surrounded by people who just love what I’m watching. Even if you go to a movie in a theatre and everybody is ostensibly there for the same reason, not everyone is a rabid fan of that movie, so to be there with people who are one hundred percent for the show, and to be there sitting with my people watching that was singular and a privilege. Nothing can compare with that time in the Roadhouse.”

John also loved Part 8, particularly how the post-nuclear explosion scene played out, expanding the Twin Peaks world and blowing his mind (as was the case with the collective fan base).  He also enjoyed the return of Agent Cooper, and found it fascinating to see how his own scenes fit in the big picture, especially his work with Nae Yuuki (“Naido”). Walking on to the set and seeing her in her character’s makeup in a jail cell was something like he had never seen before. He did not have any idea about her character nor what happened with Cooper in the “Purple World.” Once in her makeup, she was unable to see any of the Chad and Naido scenes they filmed. When she went to go eat lunch, she went to lunch in makeup, led by an assistant. He chuckled at what it must have been like for her, not seeing her own Twin Peaks scenes happen. So, even beyond not knowing the context, she wasn’t even able to do much more than live in her dialogue and know that they were filming in a jail cell set!

John’s favorite character is Albert Rosenfield. It’s all about loving Albert’s swagger, cockiness, and his “asshole” nature. For some strange reason, John related to the Albert character like none of the others! He fondly recalls seeing Albert enter the Sheriff’s station for the first time, accompanied by two other agents, referring to the residents of Twin Peaks as hayseeds, all the while just ready to get to work on Laura’s autopsy so he can get out of there.

“I want roles like that! Poor Chad is making the best with what he’s got. I’m not saying that anyone should suffer fools, but with Chad I think we would see that he has not had an easy time in his life.”

John’s all-time favorite Twin Peaks scene is the second Albert/Truman confrontation. He’d never seen anything close to that before or since. It made him feel that deep down, maybe it’s acceptable to love the asshole, and maybe it’s not so black and white, good and bad. He sees potential and hope for Chad through that scene! Perhaps John’s thoughts on Twin Peaks as a formative experience make sense to place here:

“Punk Rock and Twin Peaks are both disruptions, and I just went to the Festival of Disruption this year for the first time, and it really does resonate with me that [disruption] is what is required. We must have disruptions, because left to our own devices, we simply go into grooves and become myopic and stay comfortable and our minds close up and these things that come in and disrupt the status quo are essential.”

John’s next project to air is Barry, an eight episode series that airs on HBO in March 2018. John describes the series as a very dark comedy about a low-level, bottom-feeding ex-Marine hitman played by Bill Hader. Hader’s character follows a mark to Los Angeles and into an acting class taught by Henry Winkler.

“Barry finds the acting community and decides he’s going to become an actor. It’s not like any comedy you’ve ever seen, in that it’s so dark from moment to moment. From silly to dangerous to action. Like nothing I’ve ever seen before.”

One final thought from John:

“This just reminds me once again how really special the fans and the community around this show. I don’t know what it is. But those who gather in honor of it, and those who document it; there’s something really unique and magical about the Twin Peaks community, and I feel so honored to be a part of it. It’s unprecedented in my life.”

Next Time: Our Señorita Dido from the other side of the falls