Dumbland was released in 2002 as part of David Lynch’s subscription website DavidLynch.com. The series of experimental shorts was recently covered by our partner podcast Twin Peaks Unwrapped. For my part in our Lynch Night series of articles, I will not explore the show episode by episode as Ben Durant and Bryon Kozaczka did for their podcast. This way I do not risk treading the same waters in form of content. Still, there is something to explore in looking at the environment of Dumbland’s release. What was being done in animated shorts at this time? Napster was providing voluminous audio downloading at such a rate—I wouldn’t say rapid (insert dial-up static sounds)—that recording companies were stumbling over themselves to understand its implications and ship out cease and desist letters and e-mails. Lynch, of course, sees his films as moving paintings, and I note this to point out that in this environment, there would be some 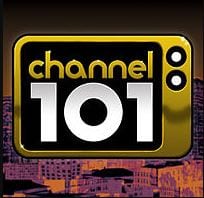 inevitability regarding creative output. David’s comic strip The Angriest Dog in the World ran from 1983-1992. It was ten years later that David would take his cartooning styling to an animated platform. This was literally turning his cartooning into a moving format. A subscription service arriving just at the tail end of the internet or “dot-com” bubble burst was fairly common. It was still innovative, a website of origins akin to what we saw in Bill Hastings’ The Search for the Zone. I personally used to visit a website built and utilized to sell videos by the Merry Pranksters, the acid-tripping band who bridged the attitudes of the Beat Generation to those of the 1960’s hippies and further seen in Mark Frost’s Twin Peaks: The Final Dossier. That group’s videos were sold on an honor system; Lynch’s was not. To continue the discussion of Dumbland’s release environment, there is almost no way to speak about these online experimental shorts in 2002 without discussing Dan Harmon and Rob Schrab’s Channel 101. In this platform, artists were invited to submit five minute pilots, which might then become serialized into a series with five minute episodes. Popular series included Justin Roiland’s House of Cosbys (in hindsight, yikes!) and Yacht Rock. The idea is extremely reminiscent of MTV’s Liquid Television, which I discuss with a hint more detail in my article for our “Cult TV” series, “MTV’s Oddities Part 1: Cerebral or Simply Heady Animation?: The Head.”

David Lynch would also serialize his short film series Rabbits on his website. Lynch spoke to his animated series, stating: “Dumbland is a crude, stupid, violent, absurd series. If it is funny, it is funny because we see the absurdity of it all.” You hardly need to read more for a more succinct description of the series, but Lynch came back and gave us the gift of Showtime’s 2017 limited series event Twin Peaks Season 3 or The Return. That offers us some opportunities. Let’s start with episode one: “The Neighbor.” It seems the takeaway with “The Neighbor” is to note Lynch’s willingness and patience in setting up a joke. The cartoon starts with Randy looking over his neighbor’s fence. Randy’s face is seen emulated in Johnny’s therapy bear in The Return Part 10 titled “Laura is the One.”

We might note that Randy’s appearance and voice are brutish in nature. The neighbor seems at the very least uneasy about the situation. Randy tells him he likes his shed. Over the course of the conversation with one dominant interruption by a helicopter, the neighbor becomes willing to share awkward details of himself with Randy. He reveals that he is one-armed. Randy plainly tells his neighbor that he has heard someone say the neighbor fucks ducks, whereupon a duck walks out of the shed and the neighbor resignedly recites Lynch’s punchline “I am a one-armed duck fucker.” There is no evident moral there, it is seemingly a brilliant set-up for a crude and blunt joke. There could possibly be a message about what you really want or need to know about your neighbors. Is it simply better not to know? From start to punch-line, the execution takes two minutes and forty-five seconds. The deadpan humor truly plays out like a paneled newspaper cartoon the likes of Max Cannon’s Red Meat. I would also like to point out another place Lynch uses timing and set-up for a punchline. The moment occurs in The Return Part 12 titled “Let’s Rock.” It is a moment with Dell Mibbler-esque pacing regarding a French woman exiting Gordon Cole’s room. Cole explains to Albert that “She’s here, visiting a friend of her mother, whose daughter has gone missing. The mother owns a turnip farm. I told her to tell the mother that her daughter will “turn up” eventually.” From the time Cole asks the woman to excuse herself to the delivery of the punchline, exactly three minutes pass. Perhaps Lynch’s formulas for a well-delivered joke?

Throughout the episodes there is a common theme of people looking over fences. This is a breach of privacy we can infer to be a frustration of Lynch’s. There seems to be an expression here. We see it in Randy’s invasion from “The Neighbor” and in “The Treadmill” when a salesman peers over at Randy excavating a sledgehammer from his ass with a determined fart. His common line to those who invade or impede his privacy is “What if I was outside taking a shit?” Crude? Absolutely, but the common theme again is invading noise from the environment, neighbors, and family as well as invaded privacy.

Most Lynch fans have heard throughout the years of themes involving invasions of pollution, industry, and electricity. Dumbland plays out many of those themes. Its 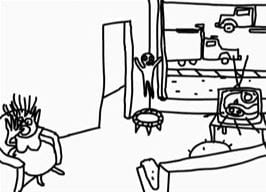 introductory panels are accompanied with electricity sounds similar to those of the Rancho Rosa introduction in The Return, and here is an excellent opportunity to look particularly at episode 6 titled “My Teeth are Bleeding.” In this episode Randy is sitting in his living room chair. His environment is extremely agitating. His wife nervously warbles to the sounds of his son, Sparky, bouncing on an exercise trampoline exclaiming his joy with obnoxious interjection. “Wee, wee, wee!” His wrestling show blares as traffic sounds swirl outside his window along with drive-bys. Sparky begins exclaiming “My teeth are bleeding! My teeth are bleeding!” Emergency sirens and more gun fire accompany the raucous crescendo. Suddenly a fly enters the static noises, and it is the only sound bothering Randy amid all of the noises including a seeming tank-fueled revolution outside his window. One is reminded of Candie’s fly distraction in The Return’s Part 10. I would like to propose one more connection to The Return, intentioned or not. It is difficult to watch “My Teeth are Bleeding” and not be reminded as an avid Twin Peaks fan of the jail scenes in Parts 16 and 17 with Naido, Billy(?), Chad, James, and Freddie. Chad almost assumes the role of Randy, surrounded by external noise out of his control. I have not attempted to play them out side-by-side.

Still, there is no sympathy to be had for the character of Randy. He is by all evidence a domestic abuser, a beer-slurping, easy to anger, dullard. His only friend is America’s too-common dip-spitting hunter in a Stetson hat, given to simple mock-laughter at the thought of killing. I posit that tone, but you can be the judge. Randy is clearly in awe of his life, to have the pleasure of killing. Lynch allows us to laugh at the cruelty. He stages each animation to perfectly encapsulate, as he states, the absurdity. Is it any wonder that Johnny’s therapy bear is the absurd face of Randy on a teddy bear’s body, mocking Johnny with British-affected salutation repeating itself mindlessly over and over in one of the most violent domestic abuse scenes in American television history? That last statement might be overstated, but the unease in that scene is palpable and suffocating. I am still personally in awe that with The Return Frost and Lynch have given us a palate to even incorporate an abbreviated statement like Dumbland into our analysis of Twin Peaks. Dumbland is a unique work of art for Lynch fans. It allows us to join him in ditching our over-analysis of his art. There are fart jokes, violent outbursts, and songs out of juvenile delirium to ply our laughter. As an audience we cannot help but laugh. Ultimately, our laughs are uneasy toward the violence and tickled at the stupidity.