Lieutenant Oakes believes the evidence found at Bennet’s house is circumstantial, so he tells Linden and Holder to find something more conclusive. Principal Meyers visits Councilman Richmond to tell him about Bennet and the police investigation, which is unfortunate for Richmond, as his new TV spot ends with him and Bennet embracing one another. Linden and Holder question a few of Bennet’s neighbours about him, and his activity on the night of Rosie’s death. A male neighbour claims to have seen Rosie enter Bennet’s house at 10:00 p.m. on Friday night. Belko tells Stan that his friend will call him later in the day, with information pertaining to the suspect working at the high school. Linden and Holder go to Bennet’s house, and he reveals that Rosie did visit him on Friday night to return a book.

Linden and Holder point out that this is the second time Bennet’s forgot to mention a vital detail about the case. Bennet claims Rosie arrived at his house after the dance, then refuses Linden and Holder entry as they’re without a warrant. Linden calls the station and asks them to check all the footage from the dance, focussing on the latest timestamp to feature Bennet. Linden tells Holder that she thinks Bennet is lying about letting Rosie into his house on Friday night. Gwen reveals that the TV spot featuring Bennet has already aired 10 times, over three different networks, so both she and Jamie ask Richmond to publicly distance himself from Bennet. Whilst talking to a friend, Holder is told about Stan’s previous involvement with the Kovarsky mob. We’re told Stan used to work for Janek as “muscle.” After being shut out of Rosie’s funeral, Linden is informed that Bennet was still at the dance at 11:20 p.m., so he couldn’t have let Rosie into his house at the previously stated 10:00 p.m.

Richmond bumps into Linden and asks her about Bennet, though she does not part with any information. Holder questions Bennet’s wife’s sister at the station. She says a visibly upset Amber arrived at her house at 1:00 a.m. After Rosie’s burial, a number of guests arrive for her wake, notably Bennet and Jasper Ames’ father, who shuns Terry after she greets him. Hurt from the rejection, Terry belittles Belko for not being a part of the family. Belko receives a call that exposes Bennet as a suspect, and he delivers the news to Stan. Linden revisits one of Bennet’s neighbours, and she tells Linden about a peeping man across the street. The man often uses a telescope to look at the stars and notifies Linden about Bennet’s activity on the night of Rosie’s death. The man claims he saw Bennet at 12:03 a.m. He says Bennet was with a girl who was wrapped in a blanket, whilst another woman helped him carry her into a black car.

Linden and Holder presume the woman who helped Bennet was his wife, Amber. They go to the Ahmed household, and Amber is seen holding a hammer whilst hiding in the corner of a room. Linden phones the station to suggest their theory, and Holder tells her about the news regarding Stan’s past. They decide to go to Rosie’s wake to find Bennet. At the wake, Stan offers to drive Bennet home, telling him that he’d be doing him a favour. On the road, Stan misses Bennet’s exit and is unresponsive when Bennet reveals his mistake. Linden and Holder arrive at the Larsen’s, and Mitch tells them that Bennet left the gathering with Stan. The final montage ends with a sinister-looking Stan staring at Bennet, as he drives them to an uncertain future at an undisclosed location. 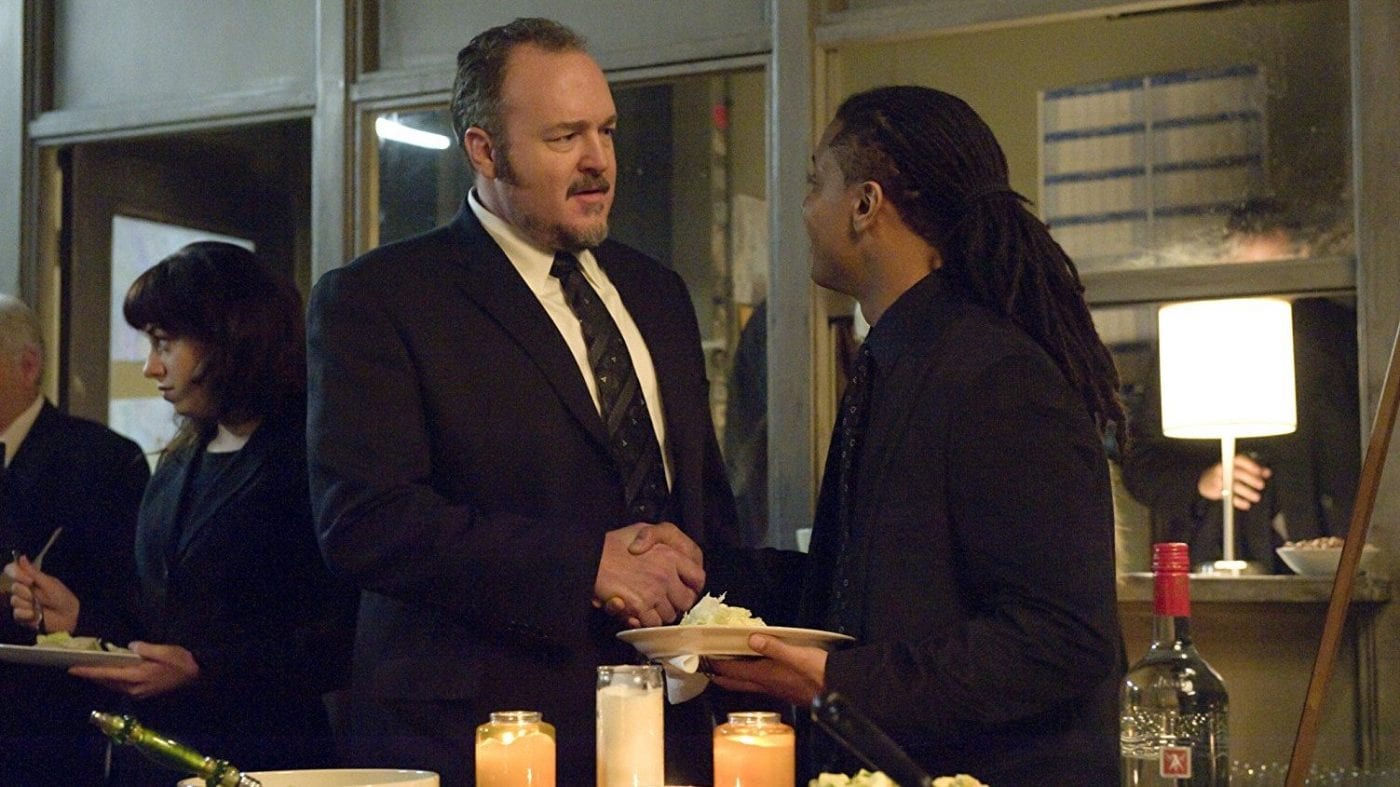 The evidence against Bennet continues to pile up during Episode 6. When questioned about Rosie visiting him on Friday night, Bennet claims, “You know what? Um, this is crazy, but-but she did. She returned a book. I’m so sorry. I forgot.” Whether or not he’s lying remains to be seen, though, Amber Ahmed’s sister isn’t too keen on Bennet’s ways either. Amber’s sister tells Holder that, “She [Amber] felt like Bennet was keeping secrets…She’s not happy…It’s like he’s made her shun her whole family.” Although, the neighbour/witness towards the end of the episode does say he saw Bennet carrying a girl with another woman, which ignites an accomplice theory from Linden and Holder. Linden postulates that “Amber wasn’t supposed to be home, but she was. She knows her husband’s keeping secrets.” Then Holder adds, “Amber goes off, loses her mind…and Bennet comes home and helps her cover it up.”

With that in mind, did Bennet and Amber commit the crime together? At this point in the show, it’s certainly a bold theory, but there is evidence to suggest that it’s a possibility. Councilman Richmond and his campaign are dealt another blow, as Bennet’s involvement within the investigation comes to light. Richmond believes Bennet is innocent until proven guilty, but both Gwen and Jamie want Richmond to distance himself from Rosie’s former teacher. During an argument about Richmond’s public image regarding Bennet’s situation, Jamie tells Richmond, “Who you are is five words! Dead girl in a trunk!” Then later, after Richmond fumbles his TV debate with Mayor Adams, Bennet’s identity is exposed to the public, which causes further damage to Richmond’s already fragile campaign. Things are not looking good for Richmond and the campaign.

Stan Larsen’s criminal past is uncovered during this episode, as Holder’s friend reveals, “Stan, the father. Eighteen years ago, he was thick with the Kovarsky mob. Muscle for Janek Kovarsky.” One has to presume that that’s where Stan and Belko first met, but does their connection to the mob have something to do with Rosie’s death? Also, Rosie’s funeral and the reveal of Bennet’s potential involvement has clearly pushed Stan over the edge, but what he has planned for Bennet will have to wait until the next episode.

As the “Who Killed Rosie Larsen?” storyline essentially spans 26 episodes, running over two seasons, it was fair to presume we’d see her funeral at some point. Though, unlike Laura Palmer’s funeral and burial in Twin Peaks, Rosie’s funeral proceeds without any hiccups. The scenes with the Larsen family are also tonally more serious, removing anything akin to the melodramatic display by Leland Palmer. Speaking of fathers in mourning, Stan Larsen is edging closer to his criminal past and has effectively kidnapped Bennet Ahmed, the man he now presumes responsible for Rosie’s death. In Twin Peaks, we see Leland suffocate and murder Jacques Renault, the man we’re led to believe is a suspect in Laura’s murder, after his arrest earlier in the show. Obviously, the story later takes a surprising turn in Twin Peaks, but will The Killing follow a similar path? After all, we now have confirmation of Stan’s previous criminal history, and as Holder’s friend suggests, “Dead men don’t press charges.”

With that in mind, will Stan kill Bennet? Will the full extent of Bennet’s involvement with Rosie be exposed before it’s too late? Maybe the next episode will provide the answers.

The next article in “The Autopsy of The Killing” will focus on the seventh episode of The Killing, written by Linda Burstyn and directed by Ed Bianchi, respectively. And, if you’re enjoying this series, I’d love to hear from you! Leave a comment below, and/or give me a follow on Twitter (@JonSheasby), and we’ll continue the conversation over there.