David Lynch and Mel Brooks sound like a cinematic partnership that teeters on the edge between the surrealism of a Lynch film and a gag from a Brooks film. Nevertheless, these two would work together in 1980 on Lynch’s second feature, The Elephant Man. Simultaneously, yet separately, both Brooks and Lynch had interest in seeing The Elephant Man, a script written by Eric Bergren and Christopher De Vore based on the novel by Sir Frederick Treves. Treves book highlights the heartbreaking existence of John Merrick, whose severe disfigurement relegated him to a near imprisonment as a circus freak show exhibit. After making a film as polarizing as Eraserhead, Lynch wasn’t exactly having to sift through many offers for work. Thanks to Stuart Cornfeld, a film producer who enjoyed Eraserhead, he picked a project that he thought Lynch might be interested in. After Lynch confirmed interest, Cornfeld, who was also an associate of Mel Brooks, took the idea to him thinking it would be a good venture for his newly founded Brooksfilm production company. Needing to be sold on the relatively unknown David Lynch, Brooks was advised to watch his debut feature, Eraserhead. Perhaps surprisingly, Mel Brooks took enough from his screening of Eraserhead to hire Lynch on the spot and put his full confidence in him to direct The Elephant Man.

The chance Brooks took with David Lynch was monumental and put Lynch on the map. The Elephant Man was a huge success, nominated for eight Academy Awards, paving the way for Lynch to be able to continue his career in filmmaking. The partnership with Mel Brooks also allowed Lynch access to such a phenomenal cast including John Hurt, Anthony Hopkins, John Gielgud, and Anne Bancroft, Lynch had come a long way from selling newspapers to pay his cast. Despite many Hollywood producers being ill-prepared to properly respond to a film like Eraserhead, the artistic integrity was not lost on all, and the opportunity for David Lynch to flourish had just begun.

One of the many positive qualities of David Lynch as a filmmaker is his ability to humanize even the oddest of his protagonists, thereby fostering an emotional connection between the audience and the characters in his film. Even the more minor characters in each of his films are given a human touch by David Lynch. Whether it’s a distraught movie director who’s casting decisions are being forced upon him, or a lounge singer embroiled in a kidnapping plot, each inhabitant in David Lynch’s world is compassionately treated and given such human qualities, it is difficult to not become invested in the worlds he creates. Even in characters with such sparse dialogue as that of his feature film, their emotional essence is beautifully captured by Lynch. The audience is taken through a 14-minute trip before a word of dialogue is heard in Eraserhead, and after that, it’s sparse until about the 30-minute mark. We are shown two socially inept individuals that seem to have little contact with the outside world. Despite their handicaps, however, Lynch shines a light on the aspects that make them similar to ourselves. We root for Henry and Mary, or at least want to see their suffering end, and that is credited to Lynch’s ability to emotionally commit us to his characters. Lynch’s gift of making such introspective cinema that allows the viewer to see at least aspects of themselves, in seemingly unrelatable characters, is invaluable. In The Elephant Man, Lynch’s human touch was needed in multitudes to polish the animal-like John Merrick, who was routinely disregarded by those around him. 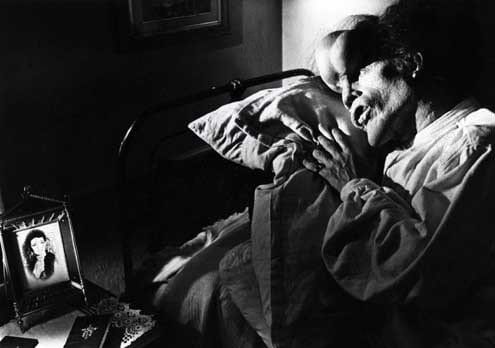 I often think of The Elephant Man as Lynch’s most human film. Perhaps that distinction should be shared with The Straight Story, the other linear oddity of David Lynch’s oeuvre. Maybe it had to do with the plot-driven “normal” timeline following of these two films that kept Lynch from going too far out into the weeds. Whether it was due to the structure or perhaps the source material, Lynch didn’t seem to hide the fact that he was putting a passionate, deeply moving bend to the story of John Merrick. In the first meaningful experience the audience shares with Merrick, played expertly by John Hurt, we see him isolated and alone, kept from having any interaction with people, only to be gawked at as the imprisoned sideshow oddity. Merrick is treated as property, solely because he looks different. He is completely made a commodity for someone else to gain because it has been decided for him that he couldn’t possibly have anything meaningful to contribute to society. By expressly showing us the disregard of Merrick, Lynch sets the tone for Merrick’s retribution that is to come. By the time Anthony Hopkins’ Frederick Treves happens upon John Merrick, Merrick has been conditioned not to trust anyone, as every person in his life has abandoned him, beaten him, or gawked at him. Treves, however, is committed to helping Merrick, so committed that he brings him into his family’s home to the shock of his wife. Treves creates the most comfortable environment he can for Merrick at his new residence in the Royal London Hospital. Lynch utilizes several long takes, focusing on Treves’ face, to show the audience the depth of his humanity, and his desire for Merrick to be treated as a person rather than some sort of freak. This focus on Treves humanizes him, making his character another humanly in-touch addition to the compassionate world Lynch creates.

There are a number of key scenes throughout the film where Merrick is seen constructing a model of the cathedral that he can see the top of through his window. As more people that come into contact with him ask about his model, Lynch creates a beautiful moment wherein he highlights the importance of each person’s individual perspective. Merrick can only see a portion of the cathedral, just like those who interacted with him could only see a part of John Merrick. No one would have expected that Merrick had the soul of a poet or a depth of feeling that he shared for those important to his life. Each person only saw Merrick’s disfigurement and assumed from his appearance that he could not possibly possess a great capacity for thought. Of course, this was wrong, but Lynch exposes the reality that no one knows all parts of anyone else. Just as the window blocked the view of the lower half of the cathedral, there is in each of us aspects of our being that are unable to be seen by others. Creating an opportunity for self-reflection, Lynch again successfully adds a richly human element to his film. In many ways, I was reminded of the ways people would interact with Dougie in Twin Peaks: The Return. Like Dougie, John Merrick was shown heart and affection by those close to him while being blown off or gawked at by strangers. This similarity goes to show that, despite there being 40 years difference between the two works in Lynch’s filmography, he has maintained a commitment to highlighting and respecting the emotional elements of humanity.

I have encountered many people who look down on The Elephant Man as “lesser Lynch”, due to its coherent story line and structure. It’s not that these people don’t care for the film, they just don’t see as much of David Lynch’s influence as in his other films. I’ve always been puzzled by this claim, as I see plenty of Lynch’s touches throughout the film. The film is full of extreme close-ups of eyes, just like we see in Blue Velvet and Mulholland Drive. The opening of The Elephant Man is incredibly similar to that of Eraserhead, both in sound design and sequences of overlaid images. The camera lingers, often longer than the audience thinks it should, which is something Lynch has done in just about everything he’s done. What stands out the most as uniquely Lynch, however, is the nightmarish sequences of Merrick’s abuse. Lynch is a master of the nightmare, creating terrifying, unnerving sequences that stand from all of cinema. Lynch also cultivates an environment of isolation, of characters that are always, even if slightly, trepidatious of the world around them. Like only he can do, Lynch creates a world that is ugly on the outside, but beautiful within, echoing the mindset David Lynch seems to apply to all of his films, that “people are frightened by what they don’t understand.”