What would cause you to have the capacity to kill? Sheer anger? Blind rage? Premeditated thoughts?

This week’s episode touched on the many ways that our human psyche could exist in a grey area when it comes to committing the ultimate crime of murder.  I myself while writing this felt compelled to commit a small act of finality by “taking care” of a stink bug that just happened to land on my computer screen and scare me out of my zone. I did not think twice about it. It was just a bug, but what if it wasn’t? What if it was something else defenseless. Would I have the same reaction? Most definitely not.

We start this week’s episode with Kreizler visiting an old client, of whom he was also a patient. In an interesting exchange, the maid bring in tea and to my surprise, although not to Dr. Kriezler’s, his client’s maid is male. She questions what brings Krielzer in, and he asks her what would cause someone to maim or disfigure another. She gets up and brings up her frame of glass-encased butterflies. She tells him that underneath their fluttery and whimsical exterior, they have armored and sharp organs to be able to destroy another during coitus. This caused me to immediately think I will never look at a butterfly the same again, but also brought home the point of yin and yang. Pleasure and pain. There are many who consider the two to be closer in definition than I would personally think. Kriezler agrees that when she would tell him about men’s vulnerabilities, that it would give him pleasure, as he is vulnerable with his ‘crippled’ arm. So is our killer ‘crippled’ in such a way that he is searching for others like him? 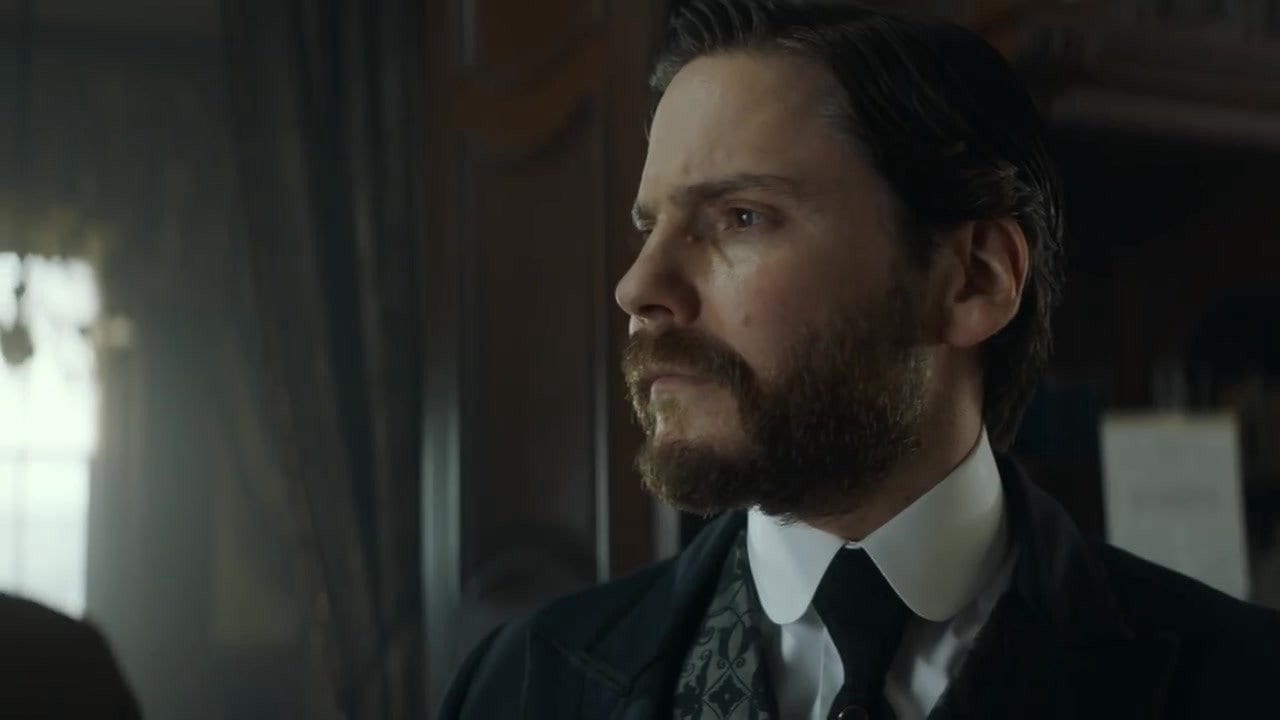 We happen upon Roosevelt being hounded by the press on his way into the precinct. The press have found out about the other deaths.  There is also a lively exchange between Captain Connor and Roosevelt, where Connor reveals John Moore’s sketch book.

The Issacsons discover that our killer uses a kind of sharp object to scale the walls of the area where they find the second body.  Climbing does not seem to be the hobby of someone who did not have the funding for it, does it?

Roosevelt has told Sara to give the sketchbook to Kreizler. When she does not find him at home, much to Mary’s chagrin, she is told he is in one of his trances over at the park. Sara finds him on a park bench across from a woman. Their conversation uncovers that Sara would not have it in her to kill a child, and that she would like the empathy to feel for anyone who had. They observed the woman opposite them. She is a society woman, had two children. She killed them both about six months after the second one was born.  Society bestows on women many things. Society formed this woman and who she had become.  Kriezler’s point is that to the naked eye, this woman may look like everyone else with their ideal life, but society is part of creating who we are.  She is now a hollow version of a mother who comes to the park and wheels around an empty pram. We are all capable of causing harm.  It is up to the raw material we have to be in the ‘right’ combination on whether we act upon them.

Moore goes back to the brothel where he was drugged. It has been closed by the police, and is now just keeping the boys/girls safe with a roof over their heads. Marcus Issacson also shows up. They locate a window in the basement and see that there is a very high roof.  Both Moore and Issacson investigate and run into a girl named Bernadette (real name Joseph). Joseph tells them that the “killer” was considered a saint by the last victim. He looked toward him as his savior.  Moore acts unusually protective in a very sweet moment with this boy, wipes his make up off, and then tells him to call him if he hears anything and to stay away from the Man with the Silver Smile.

We see a man putting on long gloves, his arms covered with sores. He tells another young boy that he wishes they could go away from here.  The boy answers, “You know we can’t leave.” The answer: “When has that stopped us from doing anything?”

Kriezler interviews a patient of Bellevue, a rich child dog killer. His answer—“The owners could just buy more dogs! They were just stupid dogs!”—does not stun Kriezler, but his reaction is interesting. He goes out into the courtyard of the sanctuary and sees one of his students, Ezra, upset that he was not visited by his parents. He then tells him who is bothering him. Ezra’s reply? “Mother!” Our Dr. Kriezler than proceeds to tell him to “kick the stuffing” out of the ball and scream Mother at it. Is this our own Dr.’s issue as well? From the kick he made on his own afterwards, it would seem so.

Moore come to tell Kriezler what he’s found and sees that Mary is upset with the notion that Kriezler and Sara have spent time together.  Moore takes it upon himself to take Mary out on a date. They watch Edison’s newest movie and then return back to find Kriezler seriously distraught and reprimanding Mary like a parent would,  Though earlier we see Kriezler in Mary’s room going through her things and see flowers saved in a book; are they from our good doctor? There is love there: to what degree is still to be decided. 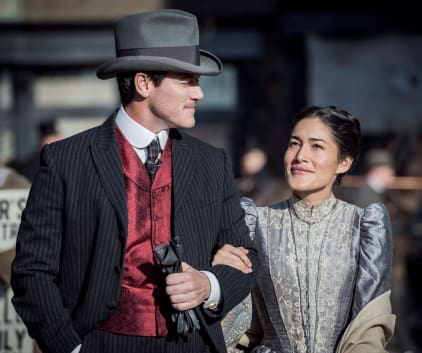 We also get the story of the animosity that is between Roosevelt and Kriezler. They had gotten into a disagreement in college. Kriezler challenged Roosevelt to a duel and Roosevelt made it with their fists. Since Kriezler’s arm is crippled, everyone saw it as a disadvantage, except for Kriezler. 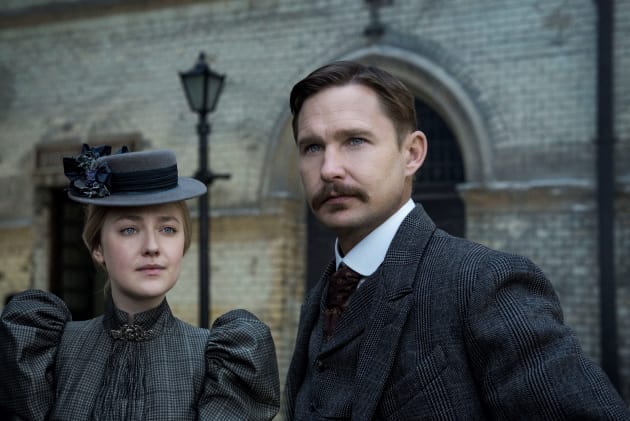 Back at Kriezler’s home, there is a very odd exchange between Moore and Kriezler. Kriezler asks Moore to buckle his boots, something we saw him struggle with earlier in the episode.  Kriezler brings up Moore’s fiance leaving him again. Was he jealous? Is this why he prefers the company of the women of the brothels? Moore answers that his sense of shame and jealousy are the same. He receives a kind of pleasure, while he goes through the pain. Hence, the money for the ring, and the ring back at the end of the deed.  He’s replaying the spurning of himself from his love every time he visits one of these establishments. Moore than asks Kriezler why he pushes those away who care about him.

Kriezler come back with a question: “Why do you stay?”

Moore speaks with a dentist and we find that the killer has syphilis. It is why his teeth are silver; mercury salts gave him a silver smile. Said silver smiled suspect, is perched on a rooftop, from his point of view we see Giorgio Santerelli’s mother with a letter going to the police. We then see our Victorian CSI team assembling, all going somewhere, but where? They all meet at a supper club, each thinking Dr. Kriezler is the one who invited them. They are all mistaken. The killer placed the letter, contacted each one of them to be at that place at that time. Is he watching them? Kriezler knows  and the others believe he is watching their every move. The letter given to Sara and read aloud by Kriezler is disturbing, every word as blood chilling as the next. He talks of the poor versus the rich, and how they are filth. He talks of eating children, because they are the sweetest. He describes in detail how he killed poor Giorgio. Saved part of him and cooked him with onions and carrots.  What kind of monster would send this to the mother of a victim? We do catch glimpse of the killer’s face, and it is one that will haunt me as I go to sleep tonight. This killer could be anyone, someone you feel you might know and would probably never suspect. Except for that menacing silver smile. 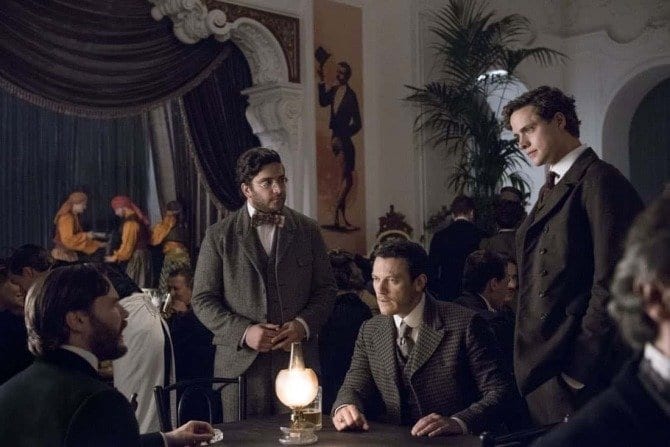 Something I will be following into next week’s episode: does having money make people trust someone more? It seems that our killer has quite a bit. His victims, not so much, if any at all. Which brings us back to causing and inflicting pain, but it gives him pleasure. Does he feel that by putting these poor boys out of their misery, of a poor life, he can ease their pain but use their pain to feed his own rich pleasures?  Is this his reason for killing?  I guess we will have to wait another week.