Northern Exposure ran from 1990 to 1995 and featured the classic fish-out-of-water story of Dr. Joel Fleischman, who has been forced to relocate to the small town of Cicely, Alaska and to operate his practice for a basic income in return for the state footing the bill with his medical school tuition. It’s a fantastic premise, and has all sorts of promise hinging on the neurotic Manhattanite grafted onto the remote wilderness town. But this potential seems both wasted and reached (though in a very different way) as we venture further away from the Pilot and branch out from Joel’s narrow viewpoint towards the expansive point of view of the people of Cicely.

Allow me to explain.

The complexities of characters like Joel are usually vast. They start from a place of ignorance, at odds with the environment, and through the course of the story they either change the environment or are changed by it. Marty McFly from the Back to the Future franchise is a great example of this. He starts off in the first film as a snarky, lazy, nogoodnik kid who gets wrapped up in a time travel adventure that forces him to accept the huge responsibilities involved in getting the space-time continuum back on track following his accidental intervention in his own past. By the end of the first film (and definitely by the end of the third) Marty has come to a new understanding of his parents and indeed of himself, and we’re confident that he will rise to the next set of challenges after the credits roll.

Skipping to Disney for a moment, Princess Giselle from Enchanted is a character who does the opposite, and morphs the real world of New York City into a modern Andalasia — instead of calling for doves and field mice and butterflies to do the housework with her, she gets pigeons and rats and cockroaches, but not only doesn’t she mind she actively encourages it; instead of grumpy citizens annoyed by her sing-a-long in Central Park, everyone joins in, uplifted by the moment in a way you don’t expect they could be. The potential of the real world is only actively realized when Giselle approaches it in her unique way, and it changes for the better because of her.

Joel, like both Marty and Giselle, has to make the best of an unwanted situation. His being forced to live in Alaska to pay off his debt to the state is a great comedic set-up because of the great disparity between the life he wishes he was leading — as a rich doctor with a cushy midtown office, a life of luxury in a bustling metropolis — and the life he is being forced to lead — cast out in the middle of Frozen Tundra Nowhere, working for peanuts, with bumpkin neighbours and wild animals roaming the streets. And while the early seasons do treat us to a number of very funny comedic moments as Joel comes to grips with living in the wild, eventually the town of Cicely and its denizens begin to grow on him, and us. And who can blame him? Cicely, Alaska is a weirdly magical place.

But it doesn’t grow fast enough nor far enough (for me at least) for me to champion Joel as a great protagonist.

The biggest difference between Joel and the classic fish-out-of-water tale is that we should be on the side of the fish, rooting for him to either find his way back or adjust to life on land. Joel makes it hard for us to do that. At first his annoyance with the situation is comical and we are on his side; but that goodwill only lasts so long. Over the course of Northern Exposure’s six season run, Joel doesn’t come close enough to toppling his seething disdain for the backwoods lifestyle that he’s forced to endure. There are moments, certainly, where he seems to accept it and even thrive in it. But those moments rarely carry over to the next episode. Like a classic sitcom, Joel seems doomed to reset at the start of every week. The people around him are good and kind and help him in every way they can, and Joel rarely sees fit to return the favour except insofar as his indentured servitude as town doctor allows.

When I was doing my latest rewatch of the show, this is what stuck with me. I tried very hard to like Joel, because I felt that this is what the show wanted me to do. But I can’t imagine that show creators Brand and Falsey or the writers of the later seasons truly expected us to side with the guy who can so easily fire Marilyn, who talks down to Holling, who can’t seem to understand Ed’s particular method of expressing friendship;

the guy who complains constantly about being so far away from bagels and the theatre, who can’t wait to get the hell away from there at every opportunity. It’s frustrating, but it also seems to stem from the way the show progressed, from a fish-out-of-water story to one about a town full of good people making an honest go at living life. It happens gradually, but soon we start to care more about everyone except Joel, which is odd for a show that began, literally, with the sound of his monologuing on a plane to Alaska. Nobody cares that Joel is mad about his living situation; we want to find out about Chris and his brother, or the May-December love affair between Shelly and Holling, or the latest film project that Ed is working on, or the beautiful adventures that Marilyn has, whether she’s buying her mother’s house or taking a holiday.

He has moments of kindness, of course, and these are the places where his character works best; as Matt puts it, the other characters help “smooth Joel’s rough edges” a bit by virtue of their interactions with him. By the end of Joel’s tenure on the show, he and Ed had developed a quirky friendship that did seem to be mutually beneficial on some level, which is helpful as Ed continues on his path towards becoming a traditional healer, often working alongside Joel in medical capacity as part of his training. Matt and I personally love the fact that Joel’s concern for Marilyn sends him running off after her during her 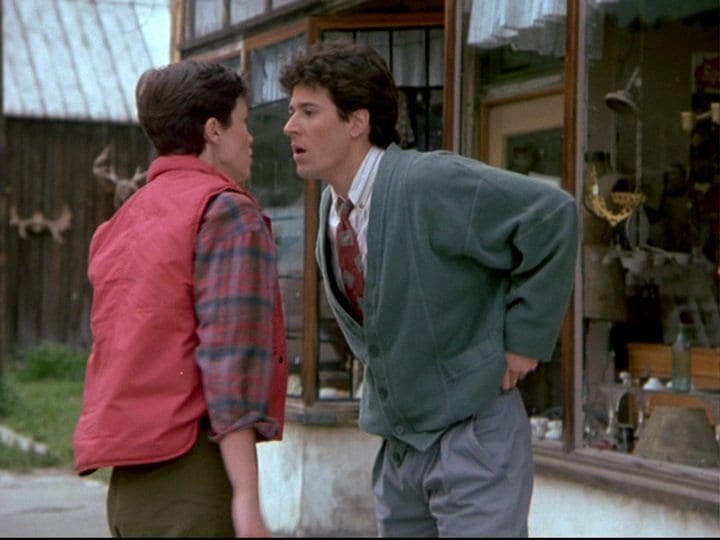 vacation to Seattle, worried as he is about her first time in the big city. He does try to learn about hunting from Chris and Holling, and goes so far as to work as election commissioner during the town’s mayoral election, and seems to be on good terms with Chris, Ruth-Anne, and Maurice (the man who arranged the contract and is determined to hold Joel to his bond.) And, of course, his on-again/off-again relationship with Maggie, while predictable, provided some of the show’s most memorable moments and episodes — as with any will-they-or-won’t-they story, the moment they do relieves the tension but their period as a couple is punctuated by moments of brightness in the otherwise duller later seasons of the show. (And his subplots with Adam and Eve are particularly hilarious — but I’m very partial to Adam Arkin, so I’m biased.)

Joel’s lack of development may not really be a comment on the writing for Joel as a character but more a comment on how well Cicely and her residents were conceived and developed. Because, let’s be honest — by the later seasons, the show wasn’t about Joel anymore, but about the place Joel happens to reside, and the people who reside there alongside him.

Still, Northern Exposure seems to have been plagued with indecision on what to do with Joel, especially once it became clear that his place in the town wasn’t as central as the initial premise would have had us believe. And this shift is rather jarring when binge-watching the show as Matt and I did recently. So it occurred to me that Joel could have been the kind of character who emerges at the end better for his experiences, transformed from ornery and neurotic to someone somewhat likable, but at the end of the day I’m still not entirely sure what Joel learned about life during his time in Alaska. His final story arc plays out over a short period of episodes, wherein he is dumped by Maggie and runs away from Cicely, taking up residence in a small Alaskan fishing village up river. His sudden transformation from anal-retentive town doctor to calm, cool, and collected man of nature is shocking because of how fast it happens. While the catalyst (his breakup with Maggie) is natural and works in the context of their relationship, the end result, which wraps up in a handful of episodes, feels forced and unnatural.

By most accounts, this was all owing to behind-the-scenes drama involving pay disputes and other concerns that saw star Rob Morrow leave the show entirely before its run was over. But by the time this took place, the bloom was off the rose, and the show’s ratings had begun to fall off anyway. Perhaps fans would have continued to tune in had Joel showed more care and empathy, or if he’d been given the opportunity to show continued growth. But,

I don’t think the writers and creators intended for this to happen — for Joel to become a supporting character in his own show — but the fact that it happened nonetheless is interesting. Credit should be given to the ensemble cast for that, as well as to the writers who managed to mine wonderful, insane, and uplifting stories out of the Alaskan landscape for six years.

Despite all the build-up and the dramatic/comedic elements in place from the start, Northern Exposure seems to fall short of the mark when it comes to this particular story element — but I think by the end of the first season, it’s clear that Northern Exposure is no longer a fish-out-of-water story after all. Maybe it never was. And the problem is that nobody told Joel. He is more mean and bitter than we might otherwise expect him to be if he were to grow and change and ultimately become the protagonist that this show deserves. The unexpected offshoot of this is that we find kindness and heart and ultimately a much more rewarding experience with the people of Cicely than we might have otherwise had, had Northern Exposure stayed focused solely on Joel and his character development.

In the end, we’re better for it.

Join us next week as we meet up with the wacky cast of character who populate this Alaska frontier town!