You could feel the tension from the very beginning of tonight’s episode of The Alienist.  It began by the panning of a dead white horse in the middle of the street, with everyone around going about their business except for a young boy who takes a minute to acknowledge the horse’s death with a quick pet of his mane only to be yelled at by someone. This felt like an analogy of sort about what has been happening with these young boys getting murdered and our cracker jack investigation team being the only ones who really care about these poor boys and finding the killer.

The tension followed all the way through this episode—titled “Ascension”, for that was the holiday we thought the killer would strike again—and our team tried and succeeded in setting up a sting operation, with Stevie acting as bait, but our killer did not take a bite. We also see Connor as a citizen, having to pay a nickel for his own beer. The horror! We also see an exchange between Van Bergen and his mother. They are sending him on a steamer ship to Buenos Aires.  Side note: If I did not know any better, I would think that the writers on this show are big Twin Peaks fans. White horse, Bueno Aires. Now all I need is Kriezler to give me a thumbs up and I’ll seriously keel over.

As the Issacsons, Cyrus, and John Moore take to the roof, leaving Stevie below on the street, Kriezler and Sara sit in a carriage out of harm’s way. This is of course because Sara is of the weaker sex and Kriezler is disabled. Moore takes a break down on the street, and runs into Joseph in the Candy kitchen from which Van Bergen picked up his last conquest. Joseph tells Moore that the boys do not think the killer is human. Moore pays for Joseph’s egg cream—which, really, I am with Joseph here, why are they called egg creams if they are just milk, syrup and seltzer water? Moore also seems to give Joseph a little extra money. This relationship is interesting to me. Does Joseph remind Moore of his brother, whom he has lost? Is Moore just they type of guy who wants to help someone who is not of his stature? I definitely hope we find out in the next four episodes. 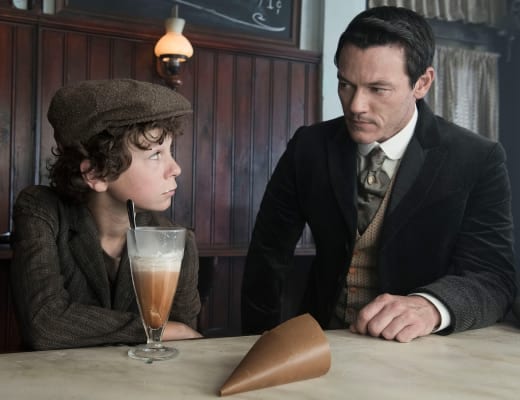 Once Moore returns to the roof, he sees someone who immediately Marcus goes after. Turns out to be a priest, or is it? When daybreak comes, Kriezler confides in Moore about maybe being wrong about the calendar since there was not a murder and they did not trap him with Stevie. We then see Kriezler walking back and looking down into a gutter where three boys are sleeping. I am not quite sure what he is thinking in that moment, but maybe it is a cross between pity for them and pity for himself for not catching the killer to make it safer for them. We are immediately shown an opulent gathering of upper side NY muckety-mucks, including a dear John Moore and Gram. It is an auction for the Prevention of Cruelty to Children. At said auction, JP Morgan (played brilliantly by a transformed Michael Ironside) corners Roosevelt and tells him Van Bergen is no longer a threat and if he does not get Van Bergen out of the suspects, his future will be as good as dead.

Sara goes to Kriezler’s home and tells him that they have set up another sting, inside the brothel this time.  Eight days have passed; the trap is set for tomorrow night, and Pentecost is the next night. Sara then visits the Moore household.  Gram has won an armadillo, and Moore a typewriter. Sara has brought an article for Moore to see. It is about Kriezler when he was young and played Mozart’s Piano concerto #20 in D minor.  You cannot play this piece with one arm, so she knows Kriezler has been lying to them and Moore for a very long time. He is not disabled from birth but has been somehow maimed.

There is an excellent visual of a Pentecostal Mass and Van Bergen drinking heavily in tandem.  Good vs. evil. The blessed vs. the damned.  Connor even as a civilian gets a tip that Van Bergen has come down to the docks, but has not gotten on the boat to Buenos Aires. Connor and his man follow and chase Van Bergen until his traps himself on the edge of the new bridge.  Connor shouts he is a rich little pansy and a sodomite. Van Bergen screams back that he is a Van Bergen. He is one of the 400. Connor shows no care or remorse and just shoots him in the head. Then both he and his tip man toss Van Bergen’s lifeless body into the water.

We now see Stevie inside with Marcus flanking one side, Moore the other. Keeping their eyes open for the killer. Joseph sits down with Moore.  Distracted. Marcus gets an unwanted visitor sitting with him. Doubly distracted. Poor Stevie does not have his backs, and the killer walks straight up to him and feeds him the lines. “I can take you way from here.  I can take you to my castle.” Marcus then sees and goes after him. The scene going from Marcus trying to locate him in a dark building and the ongoing banter between Sara and Kriezler, who again are set up in a carriage just out of the way, gave me the most disoriented and queasy feeling. Marcus completely misses shooting him. Sara drops sheet music. Lucius watches from the roof, sees there is something wrong, and leaves Cyrus by himself.  Sara confronts Kriezler, calls him a coward after demanding he tell her the truth about his arm and in a moment I was not prepared for, he slaps Sara across the face. I feel as more a reprimand, as this is possibly something he would do to Mary, but it still feels uncharacteristic for Kriezler. The reaction on Sara’s face tells me she thought it was uncharacteristic as well. When they realize that all of them have been pulled away from the rooftop except for Cyrus they run, only to realize Cyrus has been hurt—at least I hope he is just hurt—and that another window in the brothel is open which means another victim has been taken. We then see a cold, lifeless body.  I don’t want to speculate but  I believe this new victim to be Joseph, our dear John Moore’s ‘friend’ splayed on the alter at the bottom of the Statue of Liberty. 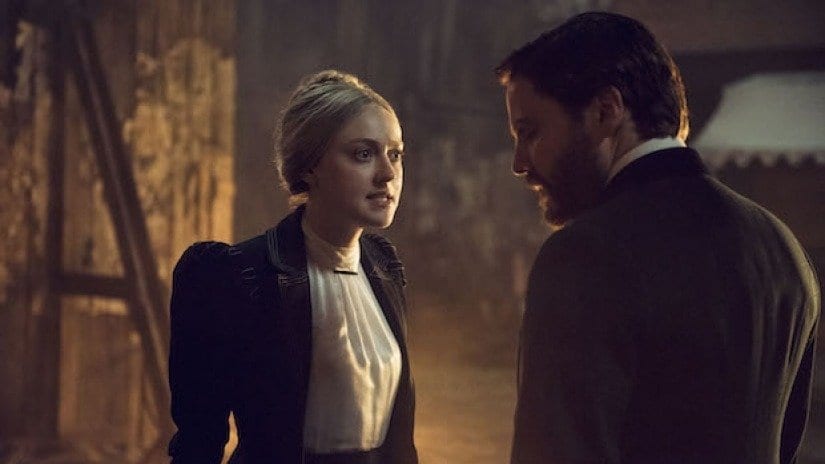 Questions that remain: Is the killer getting careless because our team is closing in on him? Will Kriezler apologize to Sarah for striking her? Will Roosevelt continue to disobey they who put him in his place of power? Is the next victim Joseph, like I suspect or another boy whore?  Only four more episodes. I cannot wait for next Monday!

Let me know what you think about The Alienist.  Are you enjoying it as much as I am?