We met Mya McBriar during my previous column, and she explained how growing up in the woods of Northwest New Jersey shaped her viewing of Twin Peaks. From the original series to Fire Walk With Me, her surroundings affected her Twin Peaks viewing experience and her viewing experiences deeply affected her life. Today, Mya describes her “I’ll see you again in 25 years” experiences, from the joy of being a part of the larger Twin Peaks community to Season 3 and more…

Mya watched Season 3 live on Showtime, usually with other people. However, like so many fans, she rewatched the episodes a few times each week alone. She was feverishly reading others’ comments on social media, listening to podcasts, and discussing with friends about their thoughts. During the original run of the show, it was such a different landscape to watch and faithfully follow Twin Peaks. Not only was Mya still a child, but there was no internet! Television networks didn’t have On Demand programming, and they rarely replayed episodes of their shows. And as she mentioned in her previous Living Novel entry, it was painstaking for her to acquire the entire series on VHS; it took her years to do so.

“Watching Season 3 in 2017 was a whole new ball game. I remember during Lost’s heyday, one of my friends used to say, “Imagine if Twin Peaks had been on TV [in the] Internet era!” People were crazy about “nerding” out online to find clues about Lost’s mysteries. Now it was happening again with Twin Peaks, and everyone was salivating for each episode. Twin Peaks coming back during this modern age certainly made everything different, but in a good way. I feel like the thing I took away most from Season 3 is that you can’t go home again. Life moves on, and you have to move on with it or you get stuck. I wrote about this a little on my blog in a post called, Down the Rabbit Hole. A nostalgia party wouldn’t have been right for Twin Peaks. It had to be different now, and so was the viewing experience. Vastly so.”

Mya was fortunate to meet Mark Frost, Kyle Maclachlan, Russ Tamblyn, Laura Harring, and Madchen Amick as Season 3 approached. She went to the Twin Peaks Festival (see photo with Gary Bullock below), was invited to contribute to podcasts, and participated in a Twin Peaks panel at Awesome Con. Mya’s writing was also published for the first time in the Blue Rose Magazine. Showtime even sent her a swag bag, and invited her to one of their promotional events.

“In 1990, Twin Peaks was this solitary experience for me. In 2017, it was a community affair. Then I was a child, now I’m an adult. Worlds apart in life lessons, knowledge and experience, but connected by true love for this show. A bit of real-life duality in a sense. Thinking about it now, I know it was a very special time, and a true gift. All of these things happened because of the friends I made along the road to Twin Peaks’ return. By the time the show actually came back on, I was completely lost in the fan world. It was almost too much; too all-consuming; in a way like a drug [maybe like Sparkle!], but I wouldn’t trade it for anything. I suppose if you’re going to be obsessed with something, Twin Peaks is a damn fine obsession to have.”

I asked Mya how she likes to let others know about her Twin Peaks fandom, giving her the choice between a tattoo, a bumper sticker, or participating in some form of cosplay. Her response:

“I was born to drive. I’ve always loved the freedom of the open road, so I’m definitely a bumper sticker kind of fan. I don’t have any bumper stickers on my car though, because I’ve learned that any sort of self-categorizing just gives the police a reason to pull you over. If I did have one, it would be of BOB. Probably just a sticker of his smiling face that would perhaps reflect green or red in his eyes at night when headlights or street lights hit it just right. I’ve always loved the horror genre, so I guess I find creepy stuff like that amusing.”

Her BOB bumper sticker response is a perfect segue into her thoughts on her favorite Twin Peaks scene:

“My favorite scene in Twin Peaks, and this is hard to choose, because I love so many moments from all the seasons, but it is probably when BOB kills Maddy. I know that might make me seem like a sicko, but I think it is the scariest scene in all of Twin Peaks. The acting from Sheryl Lee, Ray Wise and Frank Silva is just amazing. It’s so dark, terrifying, and traumatizing that it’s impossible to forget. It also marks the point in my original viewing of Twin Peaks where I left off before seeing Fire Walk With Me. The moment that haunted me until I finally got to see more Twin Peaks.

I think that fueled a bit of my obsession for the show when I was a kid. I had to know what happened. I was terrified of, but very fascinated with BOB. No one compared to BOB in terms of movie villains at that point in time. Even now, it’s hard for me to think of another character that I find as frightening. To be honest, that made me want to write scary stories of my own. I loved how that scene was edited and toggled between Leland and BOB. Plus nobody screams and cries like Sheryl Lee. She really sends chills down your spine. The whole scene is just horrifyingly brilliant.” 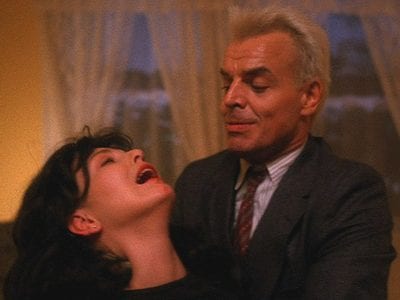 And now the future of Twin Peaks is brighter than ever before. Not only do we have new Twin Peaks to ponder, we have the Blue Rose Magazine team, which includes Mya. I asked her how that came about and what’s in store for her in 2018:

“I was very fortunate to meet the Blue Rose team at the 2016 Twin Peaks Festival before they became the Blue Rose Magazine. What a terrific group people they are! I ended up interviewing Scott Ryan and Courtenay Stallings for my blog afterward. That led to Scott and I having some discussions about doing more writing together. Then in the fall of 2016, Scott told me he was starting the Blue Rose Magazine with John Thorne. He asked if I thought it was a good idea, and if I would write something for the first issue. I was like, “Umm….YES!!” He told me it had to stay a secret, because they were going to market it as a mystery. I loved the idea, and I thought it sounded like so much fun to be a part of. Everything just evolved from there. Scott, John, and Courtenay have done amazing things with the magazine since then, and it keeps getting better.

I feel grateful to have played a small role in that. It’s nice to know that because of the magazine, sites like 25 Years Later, all the writers, artists, podcasters, musicians, and fans who love Twin Peaks; the spirit of Twin Peaks will be kept alive no matter if there is another season or not. As for what’s next, I’m supposed to write some character studies for the Blue Rose Magazine’s upcoming “Women of Lynch” issue. It’s a concept issue, featuring all female writers that are writing about all of David Lynch’s female characters. It will also feature interviews with some of the actresses. I’m very excited about the characters I am writing for, and I hope it will be interesting for fans to read.”

I think this final quote from Mya sums up her experience, and it is similar to many of our experiences surrounding Season 3. More specifically, Twin Peaks has changed our lives, become a significant part of our lives, and helps us to live:

“The camaraderie associated with the fan community, and the friends I’ve been fortunate to make, made the experience superior. The excitement that built up from the time [Season 3] was announced in 2014 to the actual return in 2017 made it even more precious. During that time I started a blog, started connecting with people, went to some events, and started writing again, which was something that made me really happy. I was actually doing something I loved about something I loved, and I hope I can continue to improve and expand my writing skills because of all this.”

You can find Mya on Facebook or Twitter by searching for @twinpeaksblog or you can read some of her work on her blog at twinpeaksfanatic.blogspot.com. You can also read her articles in Issues 1 and 2 of The Blue Rose Magazine, and in the upcoming “Women of David Lynch” issue.

Next Time: He lives and creates in Twin Peaks.