Tonight’s finale, Castle In The Sky, was very bittersweet. After ten weeks of following the clues and bringing us to the suspect, we must say goodbye to The Alienist and our Monday night suspense, love, and intriguing story. These characters have grown and become a part of our conscience, not unlike Beecham has to our team. So we begin where it all began, with Dr. Kreizler.

Opera is playing. We see Kreizler in front of a rather extensive feast, alone. At the same time, Moore is going through a crowd of people. Moore goes to see the body of Beecham’s next victim. It’s not Joseph but the friend that stole the money Moore had given Joseph.  Sara, in a fantastic outfit that I myself would wear to work tomorrow if I had it. (Sidebar: Let me take a moment to give a nod to the costume department, you have done an incredible job!) Sara is ignored when asking for Roosevelt. She finds him in a room with lots of guns and weapons of all sorts. They converse on the case, and Roosevelt says he thought coming back from the West to New York would change the way people had thought of him. Sara tells him that, “The last thing an honest politician can expect is gratitude.” Sara tells Roosevelt they’re close to catching the killer, but Roosevelt says they’re not close enough.

Moore is at the headquarters watching the boys that he’s seen Joseph with.  He tells Sara that Joseph is still missing. He beats himself up that he only gave him money, and never thought to take him in. He’s failed him like he’s failed everyone else. He said that he started to feel sympathy for Beecham, that maybe he starting to understand him. There’s also a sweet moment where Moore admits he’s falling in love with Sara. He kisses her so sweetly. It is such a nice moment in the midst of all this craziness. Roosevelt comes right after. He asks about Kreizler. 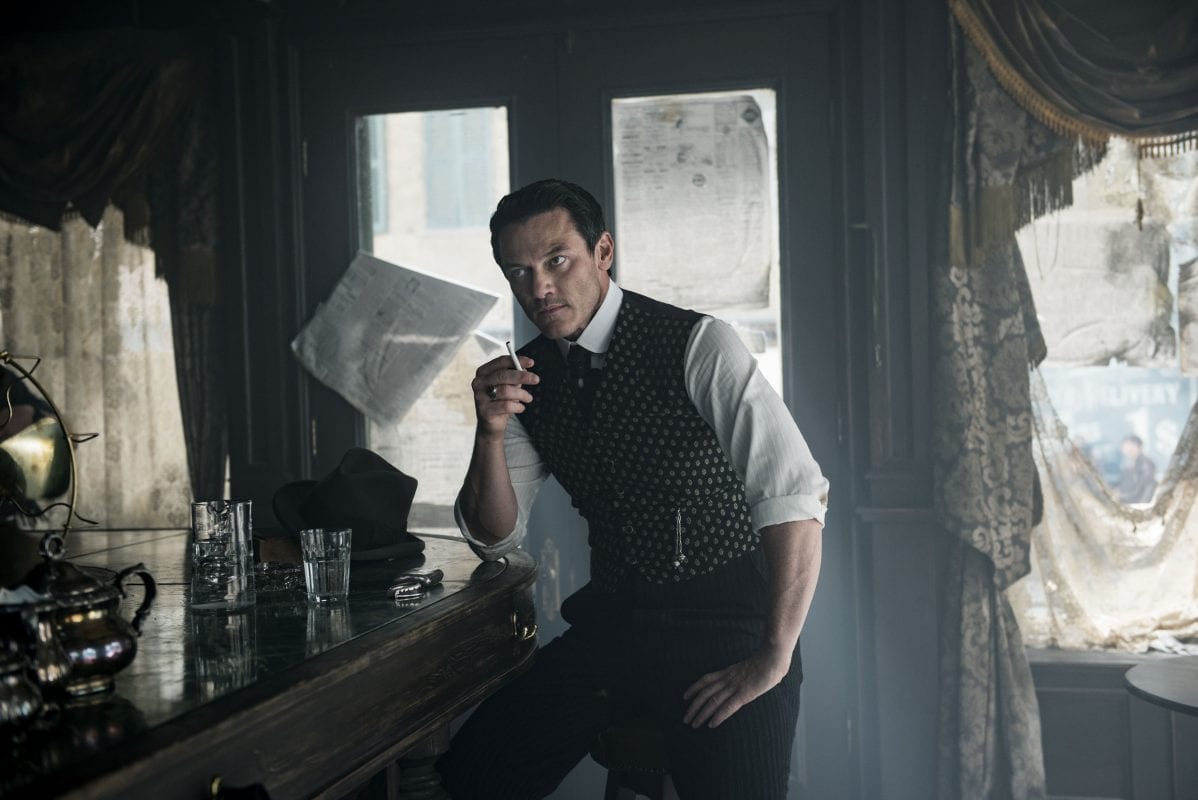 We see Kreizler is talking to someone by being humbled by his awful mystery; God. He says “Forgive me, Sara.” We then see that is indeed who he is speaking to. Sara apologizes to Kreizler as well. She says she pressed him out of regard for him; she thought it would help them ‘get’ each other. He explains about his father. The man had two sides. He tells Sara about how his father abused him and affected his arm. She tells Kreizler about when her father tried to commit suicide and she found him, he lost his nerve. He was in a great deal of pain and disfigurement. She helped put him out of his pain. Sara has learned from Kreizler. “We can either let it haunt us for the rest of our lives, or we can accept it and use the memory of our pain to help others.” He tells her he does not know if that is true. She says: “I think it is, or else we’d all be murderers.” 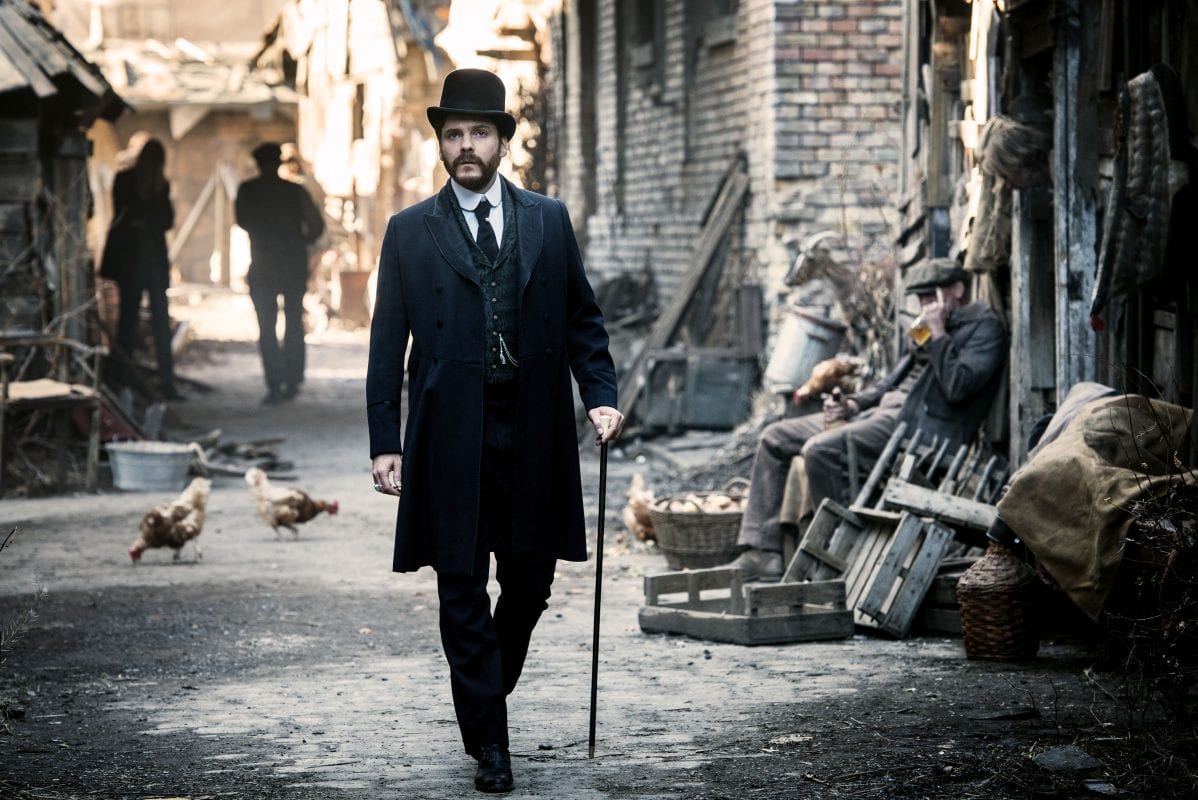 Kreizler goes to the bath house. He senses that the killer took Joseph and did not kill him. He also did not take the last victim’s eyes. He is changing his ways. Kreizler meets the Issacsons at Beecham’s apartment. He sees a map of the water and sewer system. Water, The Feast of John the Baptist. He asks for a moment alone; sitting on Beecham’s bench, he lays down. Voices of all their talking, questions, clues, echo in his head. We see Joseph in a dungeon, tied up, hearing a cat meow. Beecham drops in with a cat in a bag, and what he does next I won’t describe. All I will tell you is it made me jump, it made me sick, and it made me want to reach through the television and strangle the sick bastard. So you can imagine what was done.

Sara explains her clues to Roosevelt. The Feast of John the Baptist. High Bridge Tower — the highest point in the city. The team of the Issacsons, Sara, Moore, and Roosevelt think Beecham is still bounding from the rooftops.

Kreizler is explaining to Gram the difference between a murderer and a mass murderer. “I’m not the least bit frightened by these psychopaths,” she tells her grandson. Trust us, Moore. Your Gram on another show has ripped off her face and eaten a man. She can handle a little psychopath talk with the good doctor.

Kreizler invites Moore to the opera. Kreizler is being followed, by Connor I am sure. We see Beecham standing above Joseph, calling him dirtier than a savage. He mumbles about love and a bird on a nest. What is his true reason for keeping him alive? We see our team assembling to go to the High Bridge Tower. Moore and Kreizler attend the opera. Kreizler sips champagne. He’s trying to blend, but Byrnes is watching him.  Roosevelt and his brigade of horses show up to the bridge. Box 16. Moore and Sara keep watching their watches. Byrnes could burn a hole in them he’s staring so hard. Kreizler tells Moore to see if there is anyone in the corridor. Beecham is taking Joseph. Kreizler waits patiently for the crescendo of the opera with fire and action and Byrnes averts his eyes for that moment, so Moore and Kreizler have time to escape; but Connor is on their tail.

During the stake out, Sara asks if Dr. Kreizler found anything. Kreizler tells Moore on the way not to the High Bridge Tower, but the sewers and reservoir, that Beecham’s mother’s heart was in the box. “He’s changed,” Kreizler says. This scene played out like my deepest nightmare. Dark, tight long hallways, only being able to see by candlelight. Beecham knocks Joseph out. Beecham plans on drowning him in the Reservoir.  Moore & Kreizler find Joseph, but Beecham takes Kreizler out. Beecham continues his attack while Connor just looks on. Kreizler calls Beecham by his really name, Japheth. He’s trying to get into his head. He’s trying to understand him and gain his trust. Connor shoots Beecham before he has a chance to kill Kreizler. Connor raises his gun at Kreizler. Sara happens upon them all and before she can do anything, Connor grabs her throat. Then the moment, the moment I have been waiting for. The moment I literally jumped up and down and screamed, “Yes, yes, YES!!!” at my television screen; Sara shoots Connor.  Moore cradles Joseph.  Kreizler goes after Japheth (Beecham) who is now on the roof of the reservoir. “Why did you kill them? Why?” Beecham dies before telling Kreizler why.  Kreizler is denied his answer. His neat explanation of the reason that Beecham turned into a demented, mad mass killer. Something I know from watching this entire limited series run is that Kreizler not getting an explanation is going to be hard for our doctor to swallow. He spent this entire time trying to get in Beecham’s head, to be one within his madness, only to have him slip away before he has a chance to actually understand what was in there.

When questioning Moore and Sara, Roosevelt asks who shot Connor. Moore tries to protect her. “You’ve always had the courage to do what’s needed to be done. Your father would’ve been proud of you,” is what Roosevelt says when Sara admits she is the one that shot Connor.

Issacsons start to autopsy Beecham’s brain. They find nothing. It is a healthy brain. Moore asks what does this prove? Kriezler admits that it proves we don’t know anything. He wonders how long Beecham would stay hidden. Beecham was a wounded child. There will be more they can learn from and find the madness within. Sara reminds him that they may also find the good. What a nice moment for our crew that comes back full circle.

We see our team celebrate the four months of fruitful partnership and friendship. They toast with champagne. Moore give the “Here’s to me” toast.

“Here’s to you and here’s to me,
And may we never disagree.
But if we do, well then, hell with you;
Here’s to me.”

Kreizler gives Moore the ring he was going to give to Mary. He tells him may he have someone he can give his love to. Moore and Sara walking back from dinner. She tells him he really does not love her, he loves the idea of it. There is an affection here, and I am sad it is all over and we will not have more to this story.  Though secretly I hope we do.  Hint, hint. Wink, wink TNT!

The last scene we see is Kreizler in a cab. He is going to visit someone. His father. He blamed his father for a lifetime of disappointment and pain. Kriezler says that is all you thought about life. He tells him he was wrong. Kreizler says, “I still believe we can be better than nature intended.” Then we see him walk away, walking as a more whole and changed man himself.

I am honestly sad to see this show end. It was one of the best shows I have seen in a long time, and I really did not think anything could compete for my undivided attention after watching Twin Peaks: The Return. This show did everything right. The ensemble was brilliant. The cinematography superb. Along with the sets and costumes, the period fitting right with today’s modern issues but keeping to its time flawlessly. I do hope we get another limited engagement, since there is another book that could be optioned. If they treat that story with the care and detail they did this story; I will again be on the edge of seat each week patiently waiting for Dr. Kriezler and his team to brief me on their findings.