Paul Thomas Anderson is a living, working, current filmmaker which puts him at an extreme disadvantage to being on my radar. I have a proclivity for the work of directors long passed or those with a surrealist bent, neither category would be home to Paul Thomas Anderson. Each year, however, I embark on the quest to see every film nominated for an Academy Award. It was during the journey through last year’s nominees that I found myself in a tiny, empty theatre utterly mesmerized by Paul Thomas Anderson’s 2017 film Phantom Thread. Anderson weaves a modern-day masterpiece and an instant classic with Phantom Thread. The film is a poetic showcase of the profoundly artistic and challenging dressmaker played by Daniel Day-Lewis in what I refuse to believe is his final acting role before entering retirement, as he says it is. Phantom Thread had such a tremendous impact on me I decided I needed to see everything Paul Thomas Anderson had ever made. Even if the pilgrimage through Anderson’s filmography wouldn’t produce the emotional connection I experienced with Phantom Thread, it would still be a worthwhile exercise in understanding the development of artistry. Little did I know when the kernel for this idea popped that I would find such fantastic results with Paul Thomas Anderson’s debut feature, Hard Eight. Released in 1996, Hard Eight proves that there is humanism even in the hopeless while providing a fascinating contemplation on human suffering and how we are occasionally agents of our misery. The masterful assurance of the character-driven narrative makes Hard Eight not only an impressive debut but a remarkable exploration of humanity.

A slow, deliberately assured camera opens to settle on the face of a downtrodden John (John C. Reilly) sulking outside of a diner as he contemplates his next move after losing all of his money in Reno. A long-time gambler, Sydney (Philip Baker Hall) happens upon John, offers to buy him a coffee and teach him how to use the gambling system to take control of his life. After initial reluctance, but armed desire to come up with $6,000 for his mother’s funeral, John accepts Sydney’s offer. The film advances to show them two years in the future, their partnership going strong leaving the audience to wonder what motivated Sydney to select John in the first place. Throughout the gambling and nights spent at hotels, Sydney meets Clementine (Gwyneth Paltrow), a waitress who moonlights as a prostitute and intends on setting her up with John. The matchmaking takes so well that Sydney learns the two have eloped only after he receives a frantic phone call summoning him to their hotel room. Upon arrival, Sydney discovers that Clementine has not given up prostitution and the two have sloppily taken a hostage, a client who refused to pay Clementine. Despite his unwillingness to get involved, Sydney senses his calm disposition and steady resolve will get the newlyweds out of their dire situation. After sending John and Clementine out of town, Sydney attends to the mess the two created just before being held up at gunpoint by a friend John made since becoming a gambler. The gunman, Jimmy (Samuel L. Jackson) threatens to reveal Sydney’s motivation for taking John under his wing which would almost certainly end the father-son dynamic their relationship had become. Desperate to keep from losing John the same way he had lost the bond between his biological children, Sydney reveals aspects of his character previously hidden from the audience, divulging the depths some will go to protect their interests.

There is an element of desperation underlined throughout Hard Eight. John is introduced at what seems to be the lowest point of his life, reeling from both the loss of his money and the loss of his mother. Feeling as though he is failing in his familial duties to provide a decent burial for his mother, John is not only desperate to come up with money but also to develop a surrogate family to accept him. Sydney, who reveals a fractured relationship with his biological children, is desperate to fill the void in his life while fostering someone using his natural gifts of nurture. Clementine has isolated herself from her family. She is desperate for independence and to survive on her own, yet also willing to depend upon others, as long as she trusts them. Trust plays a binding role in Hard Eight. At the outset, John is reluctant to accept Sydney’s help, because a sense of trust had not been established. John can’t imagine why a complete stranger would want to help him discover and live off that which slips through the cracks in the gambling world. The audience is as skeptical as John, and the viewer begins to study Sydney with John to ascertain any possible ulterior motives. When Sydney teaches John the tricks he has learned over the years while seeming to gain nothing in return, he earns not only John’s trust but also his admiration. Each of the three principal characters seeks communal acceptance, trust, and a sense of belonging. These desires of their personalities Paul Thomas Anderson goes to great lengths to communicate and make relatable to the audience. 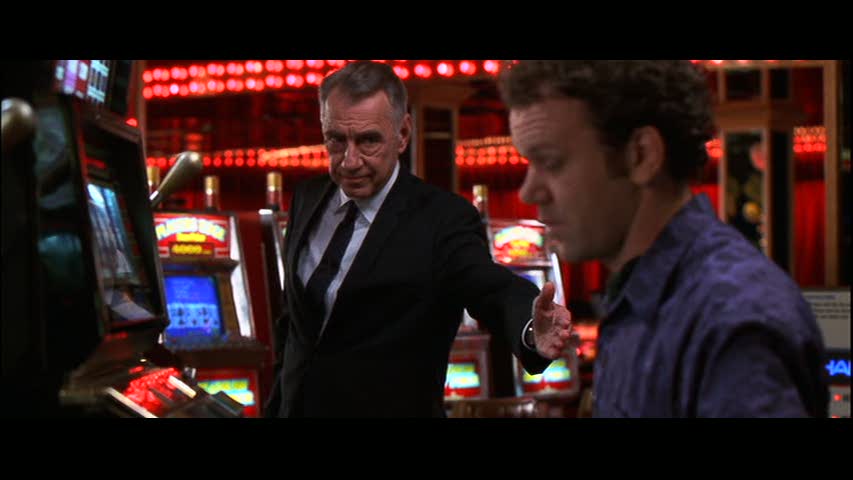 It’s no wonder Paul Thomas Anderson was displeased after losing the battle over naming his film with the studio distributing it, Rysher Entertainment. Anderson had intended for the film to be titled: ‘Sydney,’ and the filming techniques of Hard Eight evidenced that intention. Paul Thomas Anderson’s camera is always moving throughout the film, though not in a frenetic way to capture the energy of Reno, but rather as a deliberate attempt to illustrate the human mind. Most often through the film, characters are isolated in shots allowing the audience to see them from the vantage point of the character with whom they are interacting. This blocking technique re-affirms Anderson’s focus on the human elements of his film. Changing the name from Sydney to Hard Eight, though it makes sense thematically, creates a deception of its subject. This film is about Sydney, and his quest for connection and the connection he can afford to others; Philip Baker Hall carries the film, as intended, with a brilliant performance. Sydney’s patient and purposeful disposition are essential to those with whom he chooses to foster a relationship. Both John and Clementine live life day-to-day, barely seeing beyond each moment to build fruitful lives for themselves. Their introduction to Sydney, however, instills in them tools they can use to take control of their lives and drive their destinies. More than learning how to cheat the gambling system, however, what Sydney contributes to their lives is a sense of family and connection.

Paul Thomas Anderson provides a brilliant study of human behavior throughout Hard Eight. The way his camera deftly highlights the movement of human beings keeps focus intently on the individuals in the story. There is a long shot showing Sydney maneuvering through the casino towards the craps table and beyond that follows him in such a unique and precise way I was ready to change my religion to that tracking shot if only that were an option. The majority of the shot shows Sydney head on before the camera moves briefly shooting him from the side before settling on his back until he makes it to the table. When he arrives at the table, the camera pans to show the individuals who are also at the table forcing the audience to remember that we share the world with people and that our impact reaches farther than we may always realize. A scene with an obnoxious craps player, played by Philip Seymour Hoffman, attempting to rattle Sydney provides another excellent illustration of the starkly different human behavior that we interact with throughout our lives. Another brief emotional outburst overheard by Sydney while he is dining further cement the notion that Paul Thomas Anderson is interested in isolating his characters from each other, in particular shots, without separating them from the outside world. The symmetry and excellent character-focused blocking of Hard Eight have me thoroughly excited to continue this journey through Paul Thomas Anderson’s filmography. 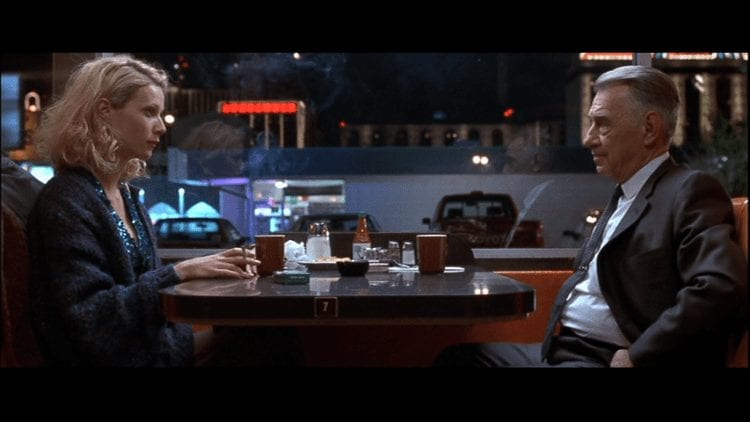 “Shit happens, what are you going to do about it?” This quote offered by John as a mantra for his life may be, to a slight degree, the essence of the entire film. Without divulging a pivotal plot point, it is revealed by the end of the film that there is less synchronicity than initially assumed as to what brought these individuals together. Hard Eight shows characters who have brought negativity to their lives in one way or another, and how they choose to live their life once they have brought about their negativity. Hard Eight shows fallible human beings who gain some redemption from their actions towards others. Sydney helps John as a way to make amends for transgressions from his past; John helps Clementine as a way of making a positive impact on someone else’s life the way Sydney impacted John’s life. There is another reason John assists Clementine that echoes a theme throughout Hard Eight; to create a sense of belonging. Family and the formation of a surrogate family is all throughout Hard Eight, coupled with the notion that a sense of belonging makes life easier. The psychological concept of the benefit of close interpersonal relationships and their positive impact on our lives runs contrary to our quest for complete independence, and to our detriment. Paul Thomas Anderson creates a dazzling glimpse into the lives of human beings, examining how we sabotage our happiness and how we then get it back and the families we create along life’s journey.