Menu
Search
Menu
Search
During the run-up to Season 3 of Twin Peaks, I consumed as many podcasts as I could while driving to and from work, hoping to pick up every little nugget of information, while remaining as spoiler-free as possible.  Over the next two months, I’ll be sharing the Living Novel entries of some of my favorite Twin Peaks podcasters.  The high-quality work of Karl Eckler and Jubel Brosseau on their Counter Esperanto: Tangents About Twin Peaks podcast balances their love of the world of Twin Peaks with their passions for weird fiction.  Karl is the first to be featured during this run, and his rich writing will bring you joy:
“I grew up in the back-woods of Washington… actually, I grew up in books” –Karl Eckler
“That’s Harold Smith’s line.  I just borrowed it, scrunched it to shape my own set of personal circumstances.  When I first heard that line—the original one—I knew two things: First, that Smith and I were the same.  Not in the agoraphobic, obsessed-with-orchids sort of way, but instead in how we view, and how we interact with the world.  Secondly, I knew Harold was destined for a sticky end.  He was too crippled by his agoraphobia to leave the house, and if a bookworm character in 1980s-90s media can’t go out and learn that “life is for living” then they would have to take up the mantle of “The Bad Example.”
For better or worse, I always thought that line of reasoning was a load of bull.  A mistake at best and a sinister method of social control at worst, the idea that “real” living must be done in person, making one’s own mistakes, writing one’s own story instead of hiding away and living in fantasy, well, that seems like the worst deal ever.” 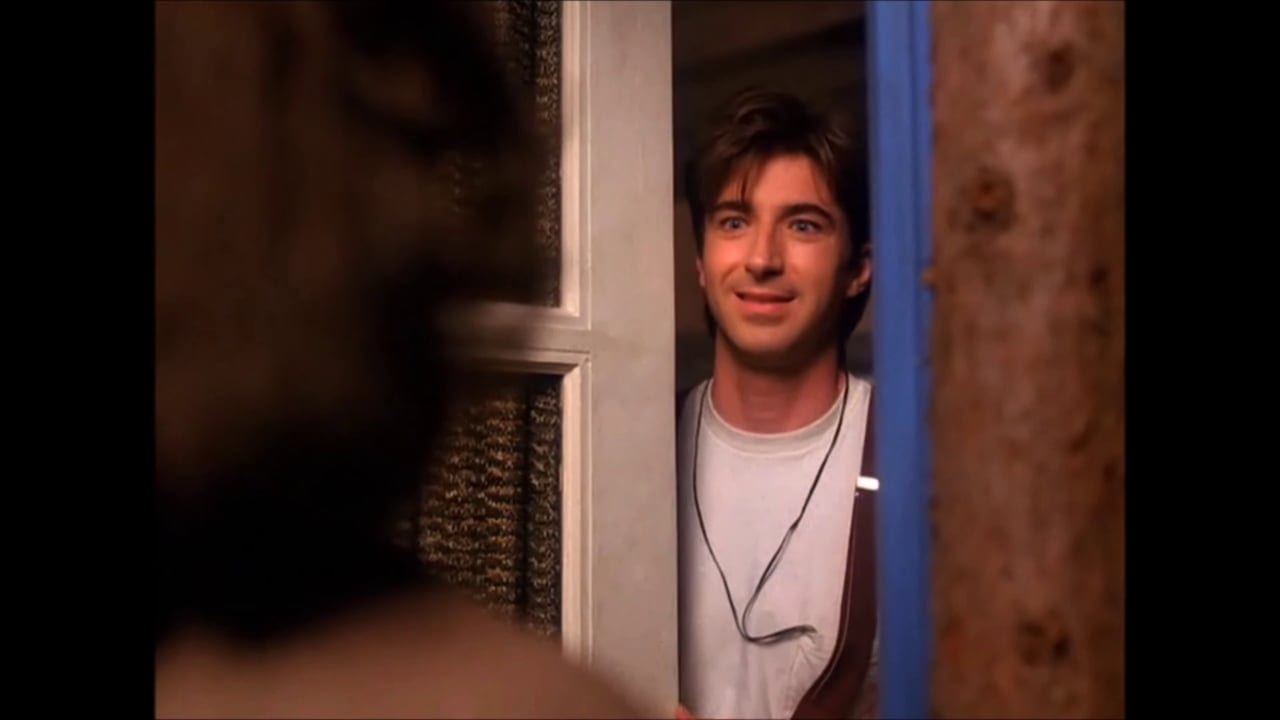 “Going outside is highly overrated” –Ernest Cline, Ready Player One
“Outside, there is only unkind, immutable reality.   Inside our minds, with the aid of music, story and art, we have worlds enough and time to explore them all.  It is these that mark the true outline and turning points of my lifeline.  With help from Carolyn Keene, I solved The Spider Sapphire Mystery when I was six; tangled with The Red-Headed League at eight; destroyed Dracula and banished It in my teens after gaining strength with Conan the Barbarian and wiliness from A Stainless Steel Rat.  Sometime after that, I heard “The Call of Cthulhu” while passing through Twin Peaks.  After, I was never the same.  Thank god for that!”
On his first Twin Peaks viewing experience, and the impact it had on him:
“I can recall watching only a single scene of Twin Peaks during its original air dates. The bit in the first episode after the pilot in which Shelly Johnson finds Leo’s bloody shirt in the wash… and hides it!  Later on, during our deep dive into the world of David Lynch (because surrealism was our jam, just out of high school) we found out that the nearest Hollywood Video had the entire Twin Peaks season on VHS, and first we rented the tapes individually… and then we rented the whole thing and watched it over a weekend.
Up until this point, the smartest thing on TV, as far as I could tell, was Star Trek.  My favorite TV show up until that point was Quantum Leap.  I could conceive of nothing as terrifying as Rod Serling’s Night Gallery.  To say the least, Twin Peaks changed my understanding of  what television could be.  It needn’t insult the viewer’s intelligence, complex emotions could be conveyed, and a world with deep secrets could tantalize viewers with clues while not revealing it’s intentions…ever. 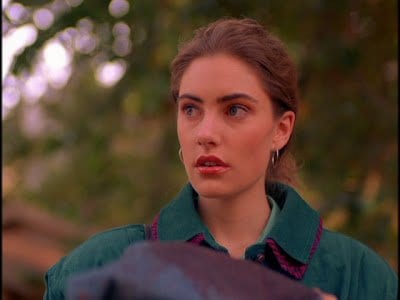 Other than the half-remembered scene on broadcast television, I watched all of Twin Peaks on VHS tapes rented from a Hollywood Video just outside of Portland, Oregon either in the fall of 1994 or spring of 1995.  It was the first TV show that I owned, again on tape, when I moved back to Spokane.  Then I got the [Definitive] Gold Box DVD set.  Now I’m looking forward to my Blu-Ray player finally arriving, because I bought The Entire Mystery before I got a device to play it on.”
Fast-forward about twenty-five years:
“I was able to subscribe to Showtime’s streaming service in time to watch Season 3 as the episodes aired.  I was continually blown away by the creativity shown by David Lynch and Mark Frost and the incredible performances every single actor on the project put in.  It was different, sure, but I wasn’t expecting another season of pie, coffee and just a kooky small town.  I knew that whatever we would get would be more like Fire Walk With Me, because all of Lynch’s stuff was more like FWWM after Twin Peaks.
That said, I really attempted to not follow up any leaks or promotions, and instead just decided to trust-fall backwards into whatever new experience Lynch/Frost decides to give us.  I’m still picking up the pieces from that l8-hour adventure, but I’ll never regret the ticket or the ride.”
Whether he is more of a bumper sticker, tattoo, or cosplay type of fan:
“No bumper. No Tattoo. So, I guess cosplay by elimination.  In my youth, I think I could have made a decent Cooper, but these days… I’d really love to get into a Doctor Amp costume!”
On whether he’s ever converted others into Twin Peaks fans:
“I almost said, “no”.  You see amongst my circle of friends, my name is a “killing word” when it comes to recommending a media.  “That’s a ‘Karl Movie'” is an assentation that the movie in question is such that “Only Karl would like it”.  Blue Velvet is a Karl Movie.  Naked Lunch is a Karl Movie.  And Twin Peaks was definitely “a Karl Movie.” Because of this hesitancy on the part of my circle of friends, there has been some hesitancy to accept my recommendations, and none of them have been “brave” enough to try Twin Peaks who have not already seen it.  Jubel and I discovered Twin Peaks together, so that doesn’t really count. 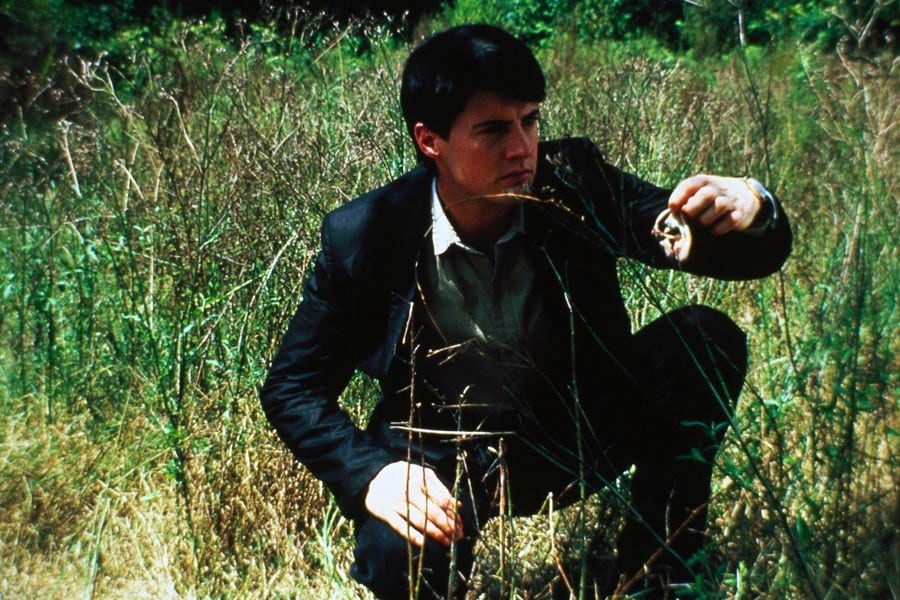 However, as I am active on PostCrossing and S2 (SendSomething.net) I have a small number of friends that I have never actually met, but exchange frequent letters and cards with.  One of these long distance friends was interested in Twin Peaks but hadn’t watched any of the series.  Perhaps I did nothing, or just threw out a nudge that tripped the decision to spend the time watching the series.  I got to reap the rewards, though.  I got to hear about the initial confusion, the loves, the hates, and then the theories and observations and the inevitable tangents.  It’s been great fun!”
On his favorite scene from any part of Twin Peaks:
“If I were being honest, I’d have to say that I don’t have one.  If I were being dishonest and annoying, I’d have to say that it is “All of them”.
Twin Peaks is a story filled with so many examples of beauty, of horror, the unexpected, indeed of every type of human experience.  To pick just one? No, while I could do such a thing, I doubt very much it would reveal very much about me, as it would be a random selection of a much larger set.  Instead, if you would indulge me, here are the first three “favorite” scenes I thought of, and why:
The First and Second Season Opening Credits
“One could—some have—written entire essays on the meanings and themes implicit in that wandering shot from bird to sawmill to river and waterfall. The warmth of the sun, the implied threat of violence in the sharpening saws, the cold danger of the frozen falls leading to the lazy stream and hidden depths, all that seems a wonderful encapsulation of the series in its entirety.  Possibly of Lynch’s entire career.”
Major Briggs tells Bobby his dream over pie at the Double R
“In a way, Bobby is the character that changes the most over the course of 25 years.  While he may not yet be leading a life of deep satisfaction, we get the idea that he’s on his way by the end of Season 3, which makes this scene a quarter century back [in the past] all the more powerful.”
“I am the FBI.” 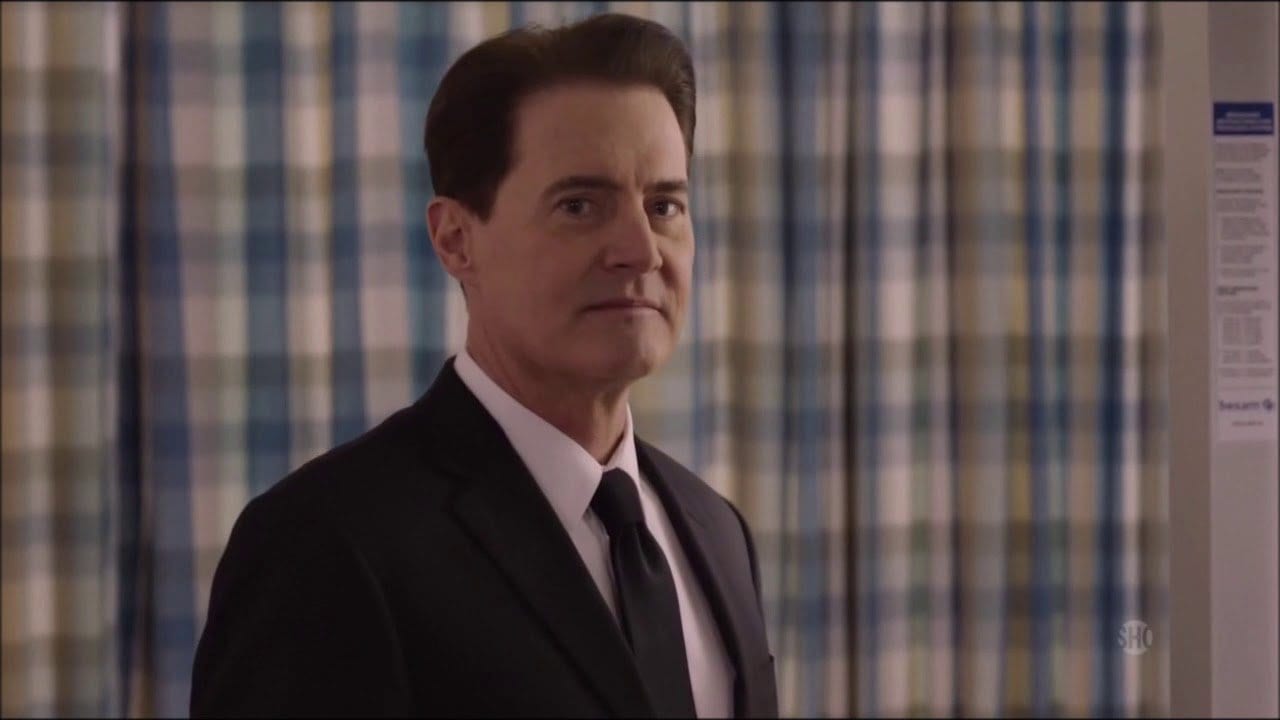 We waited 25 years and 16 episodes for this scene.  Yes, even I began to doubt that it would ever happen.  I was resigned.  I was prepared for it not to be, and I was willing to go to the end, never glimpsing the “AGENT DALE COOPER!!!” THAT WE KNEW SO WELL.
…and then, magically, he was back! Not back for long, but for that one beautiful moment, and perhaps the next 15 minutes that followed….  All the feels.  Sorry, the keyboard is swimming, there is something in my eye….”
Karl and Jubel arrived on the podcast scene during the build-up to Season 3.  When I asked Karl about their motivations for starting Counter Esperanto:
“Honestly, Jubel and I have been wanting to do a podcast together for years, if not decades.  The climate in late 2016 was just right: we had something to say, we said it and next week we (usually) had something else to say.  Eventually, we lit on really owning the tangential nature of our conversations, and decided to focus on the connections between Lynch, Lovecraft, Ligotti and all the rest of modern and historical “Weird” Fiction through the lens of Twin Peaks. 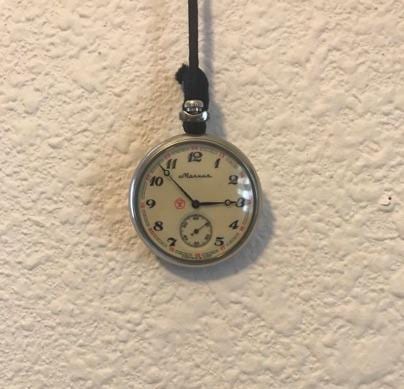 Sure, you can begin to measure a circle starting anywhere, but a flat circle is a little more difficult, and “Weird” Fiction really is something as complex and difficult to understand as the “flat circle” idea from True Detective. Having Twin Peaks as a focus and a central text really does allow us to talk much more deeply and eloquently about the material we love: The Weird.  That, in turn is only possible once we understood that Twin Peaks really was—for us at least—the center, a place through which all forking paths eventually lead.”
Reach out to Karl!
I’m @beachrubble on twitter, which is probably the best place to get a hold of me electronically.  You can send me mail at P.O. Box 13313  / Spokane Valley, WA 99213-3313   /  USA  and I’ll send you mail—real mail—back!