‘Favorites: Cartoons For Grown-Ups (And Peaks Fans)’ is now available on Audio, read by author John Bernardy, exclusively for our Patreon supporters. For just $3 a month you will have access to our full library of Audio content, plus three new uploads every week. To sign up visit our Patreon page: https://www.patreon.com/25YL

We’re branching out! Favorites isn’t just a Lynch and/or Twin Peaks column anymore, though there’s a lot of Peaks-like sensibilities in my list whether it’s in the storytelling style, mood-first focus, or immensely quotable dialog. This week we get cartoons made with grown-ups in mind, and boy is it a solid list.

There’s a giant caveat for this list in that I haven’t seen all the shows I know I should. Stephen Universe, Star Vs, even Adventure Time, all of these could be on my list but for the fact I haven’t seen them. Even Gravity Falls (which I’ve seen enough of to know it should be on my list) couldn’t qualify because I’ve only barely started it. But I assure you the ones that are on this list are contenders regardless. I’ve seen each of these shows at minimum five times through their runs. Each speaks specifically to what I love about television, so read on and you may find they could enter your pantheon as well.

Every time I don’t watch Cowboy Bebop for a while, I start to think “Oh, it’s good but it’s not that good. The music is what’s immortal about it.” But then I watch it again and I want to dissect exactly how each tonally different story is told and break down how the characters on the Bebop interact with each other. I want to remind myself that the mob story at the base of Spike’s plot is only half of what actually happens in Bebop, and I think about how amazing each character is. Genres go from crime noir to standard action, to heist flick, existential head trips, even pure comedy and one spoofing blacksploitation films. And every one of them is solid as a rock.

Onto our protagonists, Spike is cooler than cool of course, and Jet makes a wonderful team dad despite being the stoic over-serious ex-cop turned bounty hunter. Edward (a child hacker genius) and Ein (a non-speaking data dog Corgi who steals every scene he’s in) are great for slapstick and tugging at the heartstrings, and Faye Valentine is one of the most delightfully complicated characters I’ve had the privilege to witness. They are misfits, and they somehow become a family unit by the end.

The English dub cast is also phenomenally underrated (and the show is highly respected for its English dub). Oh and the mood, and that music? The show’s soundtrack starts with a kick ass James Bond-like jazz opening and the variety of music styles changes from episode to episode based on the cases the Bebop crew gets involved with (I’d gush more about it but that’ll be for next week). Cowboy Bebop is a great starter anime (one of only two my wife totally got into), holds up under repeated viewings, and continues to surprise me with quality even when I should know better.

It’s time for the bleak goth kid of the group. So many people can talk about this show so much better than I can, but it’s a classic for a reason. Skittish Shinji pilots a robot for an organization headed by his distant father that is trying to hold off Armageddon, and Shinji has a chance to remake reality. This is big concept stuff about internal and external identity and accountability, and it’s also related to nervous breakdowns and what exactly perceptions do to reality, and, and, and.

I was compelled to watch this show constantly in my early 20s. I haven’t seen it in a long time, but I still remember Asuka and Misato fondly, Katsuragi too. Still smile about the toothpick gag and anything Pen Pen. Still get really sad for Toji. Still love the scope of all the lights going out in Tokyo 3. Still hear those delightfully melodramatic music cues. Still get caught up in the intensity of the show, and still respect the show that brought me back into the Anime sphere after still only really liking Robotech.

This show is a classic. It’s intense, and relentlessly leaves its sense of humor behind after (I think) episode 18, but it’s one you’ll be thankful you’ve watched all the way through. It believes in ambiguity and mood as a storyteller as much as anything David Lynch has ever released, and there’s a reason it’s so revered.

The lone American production on this list airs highly infrequently in Cartoon Network’s Adult Swim lineup. An aging failure of a Johnny Quest analogue grew up, lost his father, got two boys of his own (one like a Ditko Peter Parker and the other a Fred from Scooby Doo), and they all go on random misadventures that reference everything I watched when I was growing up. But the joy is in the characters interacting with each other, like at the super-science garage sale the Doc put on to make a little cash and all the super-villains there ever was show up to it. I met this show in 2004 when Season 1 was done airing and Season 2 was a little while away (these days there’s an average two year break between seasons). The first thing I saw was a naked Brock Sampson presumably killing someone with his ass in ”Ghosts of the Sargasso.”

I had no freaking clue what I was watching. A week or so later I see the Monarch threatening to sick the dreaded Candiru up the urethras of the hostage Venture boys. And J.G. Thirlwell’s intense score is 40 yards beyond over the top. This was obviously a superhero/super-spy sendup but beyond that I couldn’t make heads or tails of it. I was fascinated and alienated and I had to understand what the hell I kept watching. But once the barrier for entry was achieved, I have since embraced the humor that comes from the absurdities and melodrama. I have perfected my Monarch and Hank Venture impressions, and on the right day I can pull of a Doc Venture, Brock Sampson, and the rare spot-on Orpheus pronouncement. The show is unbelievably quotable and unbelievably funny, second only to a good Albert Rosenfield rant or Dale Cooper proclamation.

As an added bonus, the creators did holiday songs in-character that you can still find at Fred’s Holiday Havoc (you have not lived until you hear Dr. Girlfriend as Bing Crosby and the Monarch as David Bowie). I recommend everyone get past the what-am-I-watching phase to earn the joy that comes with saying Go Team Venture! 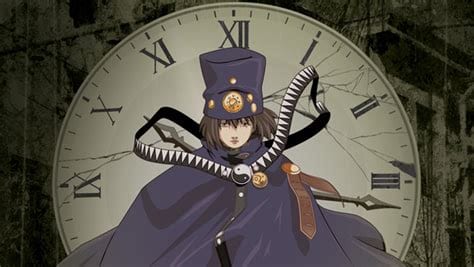 This show is a bedrock for my future creative endeavors but it’s not for that alone why I love it so much. The main “plot” of the story is happening mostly in the background of scenes and viewers are forced to piece it together as we add more characters (and therefore viewpoints) to the story. Each of the series’ short 12-episode run has a different lead character. The “main plot” happens in the margins but its effects are what’s explored in each scene. Each story follows a person who’s affected by either a serial killer spree five years ago, a serial killer spree today, or by the beam of light that shot into the sky some recent time ago.

There seems to be things manifesting in people as well, almost like if a Twin Peaksian Japanese town developed a Marvel-style mutant population. Oh, and Boogiepop is either the angel of death or a schoolyard legend. The art is as green and moody as the pics above imply, and the level of re-watchability is easily up there with Twin Peaks Season 3. The puzzlebox nature of this show trained me for dissecting The Secret History of Twin Peaks more than any one other thing and it is a joy if your brain wants some serious exercise.

Some call this show an Evangelion knockoff, and in some ways I see what they mean. I mean after all, an unknowing kid pilots a robot and has a chance to rewrite the world after an Armageddon scenario. I can see similarities in the basic plot. But, unlike Evangelion, Ayato is a proactive protagonist who may angst but doesn’t constantly try to run away. Each member of the rest of the cast has an inner life that is apparent no matter how often or infrequent we see them. And the plot works all the way through. It’s like if Eva’s pathos seeped into a well-maintained clock. And my wife, who’s allergic to anime not named Cowboy Bebop, watched this all the way through with me. In fact, we watched the first 13 episodes over the course of a week, then binged the last 13 in a day. She still quotes it from time to time.

There aren’t very many pics of this show available, but you can see the pleasing bright-but-muted color palate above. It’s easy to watch, but it’s the story that’ll keep you. This show gets in your memory, and you want it to stay there. What’s it about? I don’t want to tell you a thing other than this: the show completely changes gears (in a good way) when it opens up in the fifth episode, and there’s a slow burn plot twist that makes the final minute and a half one of the most cathartic, satisfying endings I’ve ever seen. I love RahXephon’s ending as much as I love the Twin Peaks Season 2 ending. For different reasons of course, but I say it and mean it absolutely. Can’t say that about any other endings, not even The Prisoner. If you want to see me write more about this (or really any of these shows) in a more in-depth manner at 25YL, let me know, because it would make my heart so very happy to spread the word on these gems.

And, if you have any gems of your own you want to gush about, let us know. We love spreading the love of your favorites too!