Ask any single adult you know, and they’ll tell you: dating is terrible. I don’t mean meeting someone and hitting it off – that’s great – I mean trying to meet someone and hit it off. Whatever the method – unless one is incredibly lucky – the process is going to involve a lot of wasted time, and encounters that will tend to range from awkward to bad (and let’s hope not dangerous), with the occasional feeling that someone might be cool enough to keep seeing. There’s just enough of that to keep you from giving up entirely, but also the background worry that maybe you’re just lonely and settling for what you can get. 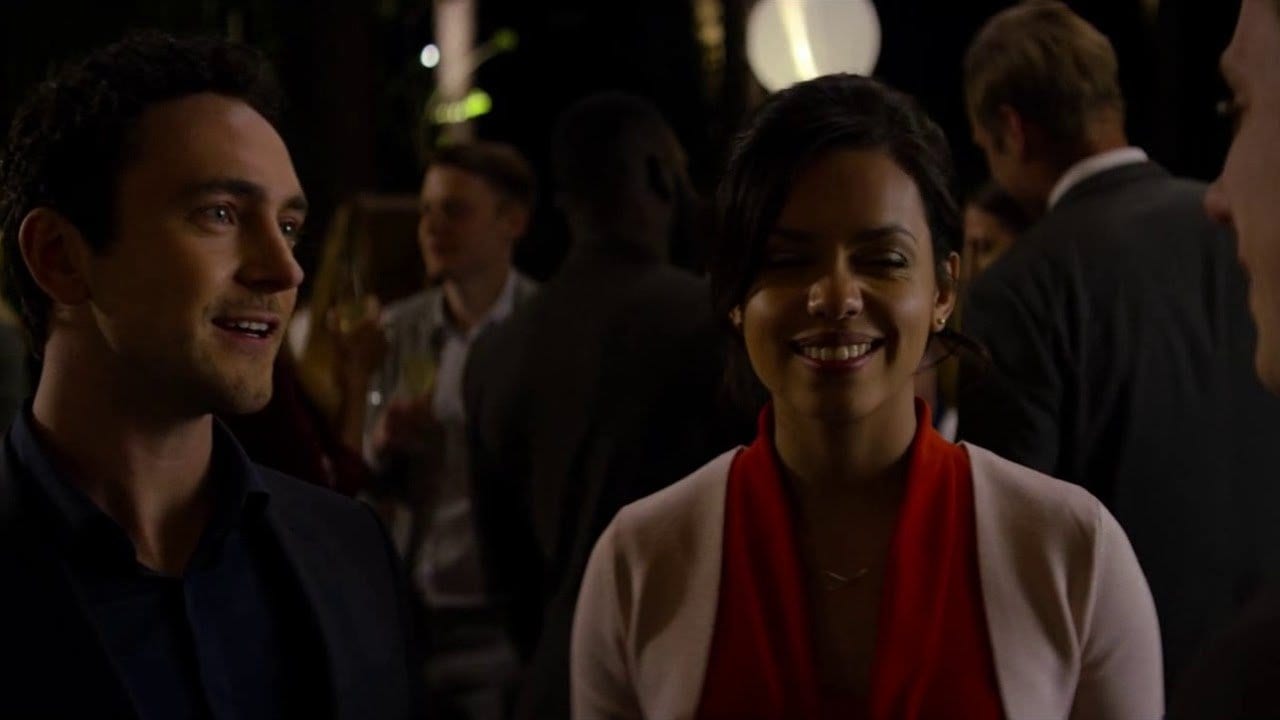 “Hang the DJ” presents a possible solution to this problem; or, actually, two possible solutions. The first is the system that Frank and Amy participate in for most of the episode. This arranges relationships for them that are to last for a set period of time. For example, Frank and Amy’s first date/relationship is set to last for 12 hours. The two are supposed to check this expiry date together (and in this instance they do).

The system then proceeds to place them in further relationships. Frank is paired with Nicola for a year, and Amy with Lenny for 9 months. Amy and Lenny appear to have a good sexual rapport, but she becomes increasingly annoyed by his loud exhaling as time goes on. Frank and Nicola, on the other hand, pretty much hate each other from the get-go. The circular devices that they call “coach,” however, continually assure them that everything happens for a reason.

The system is supposed to collect data from all of the various relationships it places people into in order to ultimately determine their perfect match. The claim is that it has a 99.8% success rate; though it isn’t clear if this means that .2% of participants aren’t matched, or that .2% of matches aren’t perfect. 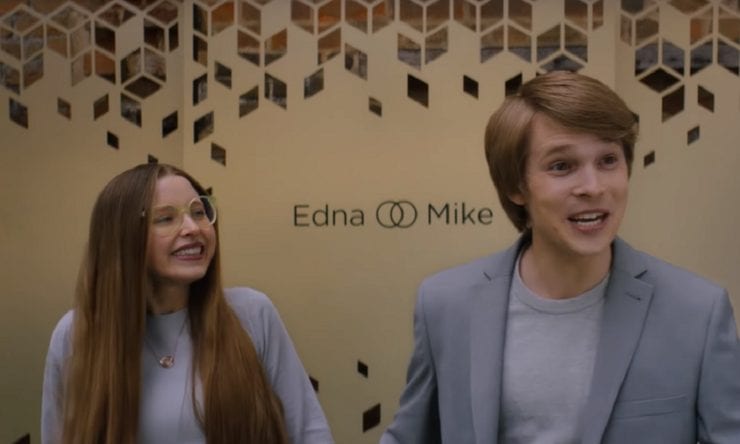 Regardless, there is something potentially appealing about such a system. Amy lays it out during her first date with Frank when she muses about what it must have been like before: having to choose potential partners oneself, deciding when to break up, etc. There would be something nice about having a computer system to determine all of this for you (give or take a terrible relationship that has been predetermined to last a year), so long as you could trust in it.

But, despite the elements that make this seem like a totalitarian state – that failure to comply with the system may lead to banishment, etc. – what Frank and Amy are being asked to trust in is the data, or analytics, themselves, and not some autocratic dictator or anything like that. This is the fantasy of employing technology to solve what may seem to be the most difficult problem of all: how does one find the right partner?

It is worth noting that “Hang the DJ” never fully escapes that fantasy. It is merely given a twist.

Frank and Amy are ultimately paired up a second time. She requests that they not check the expiry date, because she has had a bunch of flings, and they shake on it. Their relationship flourishes for an indeterminate period of time, until the middle of the night one night, when Frank feels as though he has to know how much time remains. But when he checks the expiry date alone, it sets off a period of recalibration that reduces their time from 5 years to 20 hours.

Frank ultimately confesses this to Amy, and she storms off, angry at him for breaking their agreement. They proceed to each have a series of meaningless relationships, until the system tells them they have each been paired with someone. We see this from Amy’s perspective, as she is offered the chance to have a “farewell moment” with a person of her choosing and she chooses Frank without hesitation.

She had already been considering the possibility that they lived inside of a simulation for some time; testing the notion by skipping stones. And Frank had also raised this possibility in an earlier conversation. So they meet, kiss, and quickly agree that the point is for them to rebel.

They scale the wall to discover 997 other versions of themselves, which begin to then float upwards. This was a simulation, and they were the thousandth iteration of it. We cut to a bar where Frank and Amy meet in real life, as The Smiths “Panic” plays. The real system, it turns out, is not the one that has been presented throughout the episode, but rather a dating app that employs digital copies, or cookies, to gather data based on a thousand repetitions of the kind of scenario we have seen with Frank and Amy. The real question, it would appear, is how often the couple in question rebels. 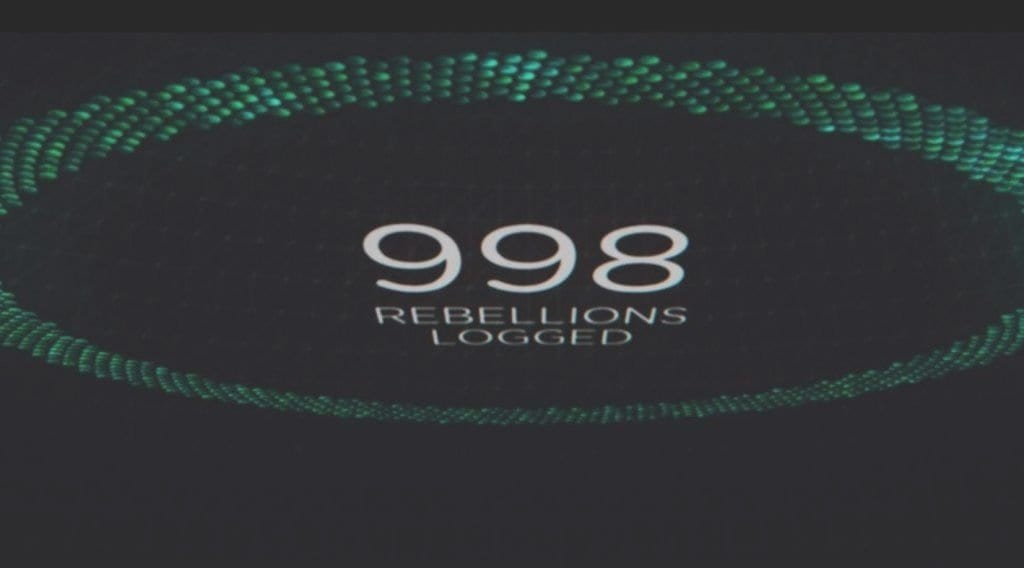 This is an incredibly Romantic vision. It is predicated on the notion that love is irrational that cannot be approached through technocratic means (even if it, at the same time, makes this the basis for a technocratic approach). It suggests that those who go along with the system and accept the one they are paired with really are just settling and trying to convince themselves for the rest of their lives that they didn’t.

1) Is a willingness to rebel against the established order a good test of love?

Of course, it isn’t clear whether any of the people we see throughout the majority of “Hang the DJ” besides Frank and Amy are also digital analogues of real people, but I suppose that they are. If that’s right, then the whole idea of the system is actually to determine who is willing to buck the system for whom, and how many times out of a thousand they are willing to do so.

Are we to believe that most people discover someone in this way who is willing to do so 998 out of 1000 times? That seems wildly optimistic, but, further, if this is the standard, wouldn’t far less times feel sufficient? That is, if someone was up for doing this with you in a such a simulation half of the time, would that not still feel pretty significant? Or even if it was maybe only once?

Perhaps I am just a worn down cynic, but the system as it is originally presented strikes me as pretty appealing. Of course there is the question as to how precisely it would work, but I see no reason in principle that a computer couldn’t collect data on the basis of a number of relationships and analyze it in order to come up with good matches. In many ways, this does sound better than trying to do it on one’s own. The match percentages one gets from existing online dating apps and the like depend on self-reporting in a way that is clearly problematic. Would it not, perhaps, be better to hand the whole thing over to the data?

It is tempting to think that the whole point of “Hang the DJ” is to suggest that any attempt to engineer a match on the basis of data is bound to be hopelessly flawed, and certainly one can see a critique of extant forms of online dating being performed by the episode. Arguably, the whole plan gets things backwards; love is not determined by liking the same films, or responding to survey questions in the same way, but by some ineffable je ne sais quoi. Yet, the episode itself deconstructs such a reading by making this argument depend on the ultimate framing device of a system that does work, predicated on the reiteration of rebellion.

This gets to the fundamental question posed by “Hang the DJ”: should we be thinking about dating in terms of finding “true love” or just in terms of finding someone we get along with well enough? Is there such a thing as true love, anyway? And, again, is it plausible to think that the 99.8% result Frank and Amy get could be widely replicated?

Should we hang the DJ? The story is that The Smiths were inspired by a report about Chernobyl on the radio being followed by Wham! Whether or not that is apocryphal, the idea goes through. There is a disconnect between the pop song and the disaster. Is Black Mirror playing with a similar kind of disconnect? Is the DJ in question the system that Frank and Amy rebel against (and thus, that is to be hanged)? But then what of the fact that this system itself is just a ploy within the real system that works precisely on the basis of such a metaphorical hanging?

How one thinks about these questions will also relate to how one thinks about how the digital copies of people like Frank and Amy are treated in the episode. Are they being tortured, as in USS Callister, or respected, as in San Junipero? Perhaps it is somewhere in between. If the idea is to pass the miseries of dating off to digital copies of ourselves, would that be an ethical thing to do?

One could argue that such a system would not increase the amount of suffering in the world, since as it stands whatever suffering there is in dating is borne by flesh and blood human beings, and this plan would merely amount to passing it off to digital copies of the same. But this ignores the one thousand iterations of the simulation for each couple. Presumably, these would have to run for unsuccessful pairings as well. So the real question is whether the joys and satisfactions of dating – sex included – outweigh its negatives; not in light of eventually finding “the one” but in cases where one does not.

Each copy of a person, or cookie, would be distinct from every other. Thus, if 998 Frank’s rebel with 998 Amy’s, good for them, but what of the hundreds of thousands of simulations versions of each must have been run through absent the other, if the system in question is to have any semblance of plausibility? In other words, if we were to remove Frank and Amy’s relationship from the story, and then multiply such a story exponentially, would the system the cookies are caught up in still seem to be ethically justifiable? Or does the system meaningfully depend on not caring about the moral status of these cookies?

Of course, this amounts to asking whether dating is worth it even if one never finds “true love.” Perhaps it is, or perhaps it is only the hope of finding “the one” that keeps us going. Or, again, perhaps we should discard such Romantic idealism and accept a less than perfect match. After all, in life there is no “happily ever after” – instead there is getting frustrated about the way one’s partner exhales loudly, or fails to close the cupboard door.