I met Mark O’Brien during the 2017 Twin Peaks Festival in Washington. My wife and I arrived at Mount Si High School for the official festival opening, and there was Mark; taking in the cool air (not too cool) and listening to the sounds before the doors opened for the Festival sign-in. Someone told me “There’s Twin Peaks Scotia from Twitter,” and almost as soon as I made my mental note to speak with him that morning, he approached us and introduced himself. That brief encounter was soon followed by another, as Mark and I sat next to each other during the Festival Trivia Contest later that morning.

In between watching Amy Shiels’ and Chrysta Bell’s enthusiastic reactions to our vast Twin Peaks knowledge, Mark and I encouraged each other as we tried to remember the differences between Johnny Jewel’s “The Flame” and “Windswept.” Spoiler: neither of us won the contest, even though I used Sabrina Sutherland as my “Phone a Friend” partner. But that’s a story for another time. I realized quickly that Mark likes to have a lot of fun, and a lot of fans. He eagerly agreed to sit down for some apple butter and saltines to share his Twin Peaks fan experiences with me. 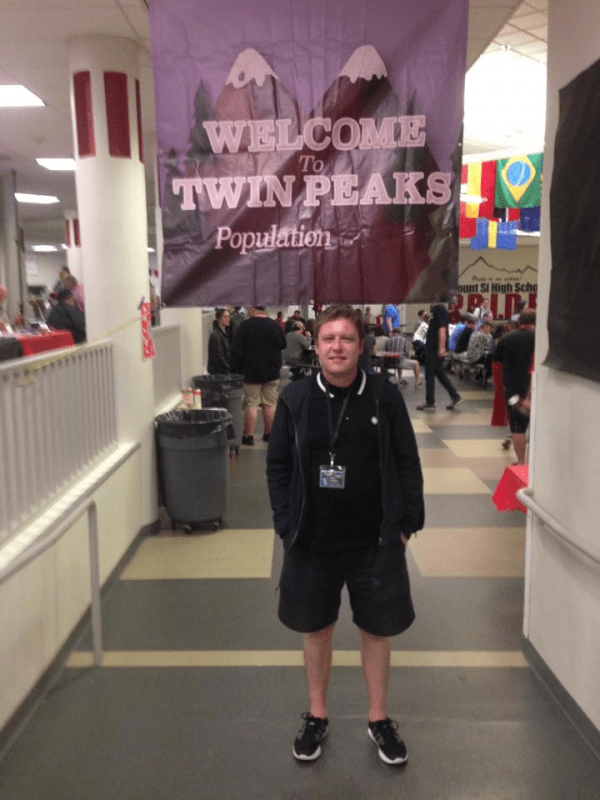 “My first experience of Twin Peaks was watching Episode 14 on Tuesday, 19th February 1991 on BBC2 at 9pm. I was 11 years old at the time and hung out with a friend in Primary School who also loved the series. We had previously watched the last series of Moonlighting and loved it and looking back with it’s postmodernism and fourth-wall breaking, it was probably the perfect preparation for the show. I’d heard about the sensation of Twin Peaks, but was only 10 at the time of Season 1.

My cousin from Canada actually visited that year. I asked him about it and he said it was a great show. He also told me who Laura’s killer was, so I’ve always known “whodunit” before I watched the series. I remember my friend telling me to watch it, as he watched it with his big brothers live and to let him know what I thought of it in school the next day. I can remember watching it clearly and loving the mystery of that episode – the episode where the killer is revealed. I fell in love with the show, the cast, the trees, the town, the sheriff department, the light and the dark and immediately identified with Dale Cooper. From that episode on he was a hero of mine. [Maddy Ferguson’s] killing, for an 11 year old (I have a cool Mum and Dad) was brutal and probably the scariest thing I’d seen, but I was hooked from there on in and hooked on the world of Twin Peaks.”

Mark was hooked, and watched the rest of the original series and more:

“From Episode 14, I watched the original run live until of the final episode of Episode 29. My school friend filled me in on the [rest of the] first series and the previous episodes with the One-Eyed Jacks shoot-out and Harold Smith. I recorded every episode from Episode 15 until Episode 29. My friend and I used to theorize what happened every episode of Season 2 up until the end. I used to check the Radio Times for the synopsis of every upcoming episode and in those days they printed the cast lists, so I got to know the names of every actor and whom they played.

I remember having weird dreams in the week before Episode 29 and was heartbroken with the ending – I think it was the first time I realized the good guys don’t always win. I called my friend straight away who reassured me the Good Dale was in the Lodge – two years before Twin Peaks: Fire Walk With Me came out. For Christmas that year, my parents bought me the Season 1 and Season 2 VHS tapes (so I could finally watch Season 1), and of course I loved it. I also bought the last six episodes of Season Two, which are still personal favourites to this day. I also bought the Pilot episode from HMV (a chain entertainment store), which (I didn’t realize until some years later) US fans found it hard to get hold of.

Some fans knock Season 2, but I have those great initial memories of growing up and watching it for the first time. I rented Fire Walk With Me when it came out a few years later. I didn’t love it at first, but videotaped the first two seasons when they aired on Bravo UK (the first time I probably watched both series the whole way though). Since then, I’ve bought every version of DVD and Blu-Ray up until the present day.”

Season 3 was a whole new experience:

“I watched Season 3 largely live on Sky Atlantic in the UK, in the mornings before work. Then I started watching it live at 2 am, so I drank a lot of coffee during my day job the day after. It was pretty much the same experience as Season 2 with the theorizing and the anticipation, except by that point I was running the Twin Peaks Scotia Twitter page. I also joined a few Twin Peaks Facebook groups with my friends I’d met largely at the US Twin Peaks Festivals and with UK and European fans I’d met online; many of whom I would meet at the Twin Peaks UK Festival later that year. I was also helping some friends who were writing and podcasting too, with some research and being there to bounce ideas off.

I went to the US Twin Peaks Festival and watched Part 12 twice. Once at a friend’s rental home with about 20 other fans, then straight after at the Roadhouse with everyone from the Festival. Both were amazing experiences. Looking back it was an amazing non-stop roller coaster summer of Twin Peaks, spent with many great people either online or in person.”

“I’d say I’m more of a t-shirt wearing/bumper sticker fan (although I have been asked to dress up at a few Twin Peaks Festivals). I fell away from Twin Peaks in my teens until I bought the Fire Walk With Me DVD out of the record shop FOPP in Glasgow, when I was 24. I was hooked again, and have owned most versions of Twin Peaks in every format since. I also started buying books like Lynch on Lynch, Full of Secrets and re-bought The Secret Diary of Laura Palmer, and The Autobiography of Special Agent Dale Cooper: My Life, My Tapes. Watching Fire Walk with Me again at an older age really gave me an appreciation of Laura Palmer and what she went through, [an appreciation] I never got when I was young and watching the original series.

Brad Dukes was the first Twin Peaks fan I followed on Twitter, followed by Twin Peaks Archive. I became a member of Dugpa.com and most of the other fan sites. I especially loved GlastonberryGrove.net, as it was a great resource for the mythology at that point.

I was doing a lot of voluntary work for the homeless in 2015 and 2016, and when that finished up, I decided to follow my heart and attend my first Twin Peaks Festival that year. I didn’t just meet fans, I found a new family and most of us are great friends until this present day. I met most of the actors including Russ Tamblyn, Wendy Robie, Madchen Amick, and Kimmy Robertson. Kimmy was excellent, as she always remembered who I was and looked out for me at my first festival.”

“Glasgow’s got a pretty cool film, art, and indie music scene and most people within [scene] that love film and appreciate Twin Peaks and David Lynch. I’m lucky [to live] in Glasgow, as a lot of my friends grew up with and have re-watched the [original] series. I converted two of my friends (who now own the box sets) and one or two more have bought the Complete Mystery and one also bought Season Three after hearing me go on about it so much.”

“There are so many great scenes in Twin Peaks, but my favourite is probably in Episode 3, when Cooper and Hawk are discussing dream souls in the Great Northern. It’s just a great little moment, and captures the spirit of this special town with them speaking philosophically. It’s just beautiful, and for me sums up the spirit of the series; as it always strived the transcend the ordinary.”

“I would say there’s not much difference, as every fan of Twin Peaks I’ve met are all very interesting and cool people. Many are just fans with day jobs like myself, but many more are actors, artists, DJ’s, Podcasters, Dancers and Musicians. I would say the difference is that since the UK Festival is not in Snoqualmie and North Bend, it’s more immersive.   Since it’s always in the same building there’s a bit more variety. You can watch a movie or go watch a Lynch-themed band, hang out with fan friends, hang out with actors or just eat a lot of doughnuts and drink David Lynch Coffee. Plus — my team, the Chet Desmond’s, won the Trivia Competition last year!

Mark is an excellent ambassador for Twin Peaks fans around the world. He helped this first-time Twin Peaks Festival attendee feel welcome, and helped me to connect to other festival-goers throughout the event. I look forward to when I can hang out with Mark again in person. Maybe it will be at a Paris café, the Twin Peaks UK Festival, or a future celebration of Twin Peaks on my home turf.

You can follow Mark on @TwinPeaksScotia on Twitter. He plans to get a blog up and running at some point soon, something I am sure will be just as fun as Mark is!

Twin_Petes is a 27 year-plus fan of the show, music, merchandise, and emotions that emanate from the woods surrounding Blue Pine and Whitetail Mountains.  He and his family now reside in what can best be described as the Purple Realm.  His favorite response to most questions is: “That…cannot be revealed.”  He loves all things Lynch and Frost.  You can find him on Twitter and Instagram @Twin_Petes.