Here at 25YLSite, we handle a lot of heavy lifting. Analysis, interpretation, deep discussion, introspective interviews… you name it, we’ve got it. “Favorites” takes a lighter approach to the material we normally cover. Each week, we will take you through a list of favorites – whether it’s moments, scenes, episodes, characters, lines of dialogue, whatever! – in bite-sized articles perfect for your lunch break, a dull commute, or anywhere you need to take a Moment of Zen. So, sit back and enjoy this week’s offering, just in time for Father’s Day: The Editorial Team’s favorite on-screen Dads.

An unconventional choice, perhaps, but let’s be real here: Captain Holt is the best dad on TV today. No, he’s not biologically related to anyone on his team, nor is he the adoptive father of anyone there either (much to Jake Peralta and Amy Santiago’s combined chagrin). But none of that is necessary to fill a parental role, something to which today’s blended families can surely attest. Sure, Holt is a bit of a robot who rarely smiles and has an unhealthy amount of attachment to Mahler, but whose Dad isn’t a bit odd? In his own way he is the best damn father around.

He is a mentor to Amy, even when she doesn’t know he’s been mentoring her. He guides Rosa along the often-difficult path of coming out to her family. He recognizes and celebrates the strengths of each of his detectives, never pitting them against each other—unless there are prizes involved, or it’s Halloween—but he isn’t afraid to use a bit of tough love to get to the bottom of family disputes. On top of all of that, and in spite of years of his own difficulties advancing within the NYPD, Holt is a steadfast and comforting presence to his family, has an insane amount of moral integrity, and loves his squad very very much. (Plus, he tells a mean dad joke and has MAJOR moves Jake & Co. don’t know about because they predate their births, just like all those cool things your dad did and which are documented only in his high school yearbook!) For these reasons and more, Captain Holt definitely deserves to be named Dad of the Year 2018.

As you can see, my choice is neither an intelligent or highbrow pick, but American Pie was as important to my childhood as any other film. And, if there’s one character that personifies my love for the franchise it is Eugene Levy’s loving and hilariously understanding role as Noah Levenstein. Whether he’s talking to his son Jim (Jason Biggs) about “the birds and the bees” or finding happiness again with Stifler’s mom in American Reunion, who could’ve predicted that the only character to appear in all eight American Pie films would be Jim’s dad? To me, that shows just how much of an impact Levy made in the original film, and how that character shone through the usual crassness of a teen sex comedy. His actual name may be Noah Levenstein, but let’s be honest, he’ll always be “Jim’s dad” to me.

Who wouldn’t want Harry Dean Stanton as a Dad? In Pretty in Pink, HDS plays Jack, the heartbroken father of Andie Walsh (Molly Ringwald). His wife/Andie’s mother walked out on them and he took sole care of Andie, although she ended taking care of her father as well. I think that is what I love about their relationship—it is one of mutual love and adoration, and reliance on each other, not just a girl needing her daddy. Andie cared for her father throughout his heartbreak and depression. He, in turn, brought Andie up to be a strong, independent, and creative woman. He encouraged her not to take crap from any man but also to follow her true heart’s desire, even if he was a foppish yuppie rich kid named Blane. Of course, the highlight of the film was Jack bringing his daughter a beautiful pink dress that she could wear to the prom. Andie subsequently butchered it and turned it into the most hideous monstrosity ever worn, but it was the 80s so we’ll let her off. Jack was proud, of course, as a father’s love is blind. 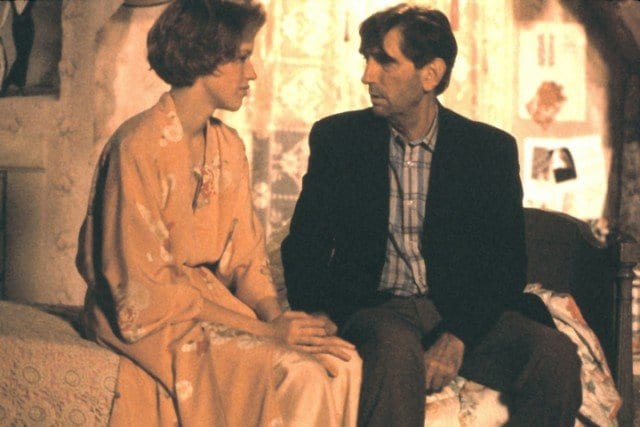 My all-time favorite on-screen dad has to be Gomez Addams. He’s rapturously in love with his wife, and his family’s happiness seems his utmost passion in life. It might be true that his virtue is sustained through naiveté, but I like to suggest it’s a willful ignorance that displays ultimate optimism in lieu of outsiders’ bigotry, ill intentions, and stupidity. Born with a mustache, Gomez exhibited admirable style. He is a man who honors the women in his life, and like the rest of the Addams family, he reminds us to be secure in ourselves, that difference is interesting, that perspective colors the mundane. When his wife takes up sculpting, he pays someone to buy the sculpture from her to encourage her success. Sure, his idea may be a tad flawed, but the intentions behind it shine almost too bright for the family’s splendidly drab decor. 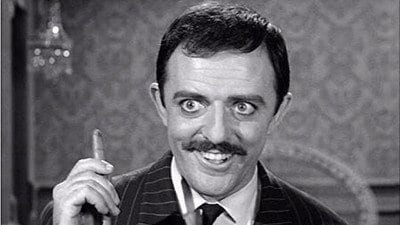 Though Buffy the Vampire Slayer’s resident Watcher was not the actual father of Buffy Summers, he was a father to her in all the important ways. While characters like Xander showed the effects of Patriarchy by sometimes needing to manufacture self-worth by pushing down those around him (including Buffy), Giles was NEVER like this. Giles treats Buffy as an equal. He allows her to grow. Lani Diane Rich and Noelle LaCroix said it best on the (well worth your time) Still Pretty podcast that, unlike Xander, Giles has no problem filling a supporting role to Buffy and essentially says “I add my strength to your strength” with every one of his actions.

He supports Buffy every step of the way, because it is the right thing to do and he knows she can handle it. He knows success comes from working together for the common good, and he instills this belief in her by example. He allows Buffy to make mistakes, and celebrates her victories. He helps her grow over the course of 6 seasons and even knows when she needs to grow without him for a while. And if he ever thinks she may NOT be able to handle something, he’ll go after Angelus himself even knowing full well he couldn’t stop the vampire.

Giles constantly puts Buffy in a position to succeed with his best effort. He always believes in her. Even when he is forced to temporarily take her powers away for a Watchers Council test, he STRUGGLES. His life’s two most important duties lined up in direct opposition to each other, and while he began that episode by choosing his profession’s duty at first, by the end he sided with his Slayer and never wavered from Buffy’s best interest from that point forward. Not once, for anything.

Besides being one of the funniest movies of 1983 (yes, I know I am dating myself), Mr. Mom was a great way to showcase what happens when a middle-class family is suddenly thrust into unknown territory. When Jack Butler (Michael Keaton) loses his job as an auto engineer during the recession of the 1980s, his wife Caroline ends up getting a job before him, reversing roles and making him the “stay-at-home Mom.” Jack ends up on a journey from not knowing what lane to drop off his kids in to becoming the ultimate Dad, and in the process gaining confidence in his abilities as a parent.

Jack ends up being the greatest Dad: fighting the monster washing machine, saving his son’s “wooby” from being eaten by the killer vacuum, and even burning his favorite shirt to show his sons that when it is time for a change, you need to face it head on and feet forward. Jack shows the perfect amount of empathy for his fellow Moms, a group of women who help Jack become acclimated to his new role. He also has the greatest sense of humor throughout this change in status. We need more stories like this set in present day—stories that don’t just make us laugh or cry but also teach us something, stories that present situations that very well could happen to any of us. Overall, I chose Jack Butler as my favorite dad because of the outstanding performance of Michael Keaton, but also because of the humility he showed as the breadwinner suddenly becoming the bread maker. Jack Butler could be my Mr. Mom any day.

Unlike other animated family shows, like The Simpsons and Family Guy, Bob’s Burgers is a comedy with a kind heart. It’s funny without making fun of people and never makes jokes at the expense of its characters. It’s a feel-good show, and we laugh with the Belchers, not at them. My Best Dad nominee, Bob Belcher, is the “normal” one in the family, and though he is well aware of the fact that his wife, Linda, and his children, Tina, Gene, and Louise, are all a bit wacky, he doesn’t judge them or love them any less for it. All the members of the Belcher family, led by Bob, celebrate each other’s quirks and eccentricities—and they have many.

Bob’s love for his family is obvious in every episode, but it’s especially poignant when it comes to his relationship with Tina, his first child. Bob and Tina have a very special bond, to the extent that Bob’s anxieties about Tina growing up resulted in him dropping a series of Thanksgiving turkeys in the toilet (he was reliving Tina’s potty-training while sleepwalking as a side-effect of some allergy medication). When Tina crashed the family car while learning to drive in a near-empty parking lot, Bob went to great (and hilarious) lengths to make sure that nobody found out she was the one behind the wheel. Bob is always willing to go above and beyond for Tina, Gene, and Louise, no matter what kind of shenanigans they get themselves into.

The Belchers are always struggling financially and business at the family-owned-and-operated restaurant is never booming. A lesser dad might take his stress and anxieties out on his family, but not Bob Belcher. No, the love that Bob has for his family fuels his hard work and determination and gets him through all the stresses of life—that, and the creative outlet provided by his “Burger of the Day” specials. 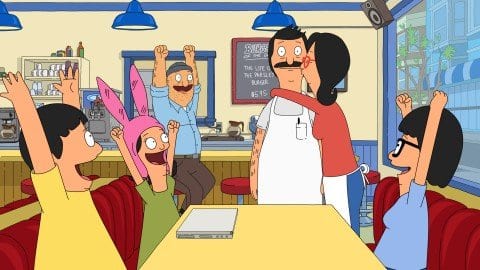