“If you figure a way to live without serving a master, any master, then let the rest of us know, will you? For you’d be the first person in the history of the world.”

Lancaster Dodd, played exquisitely by Philip Seymour Hoffman, utters the above line in Paul Thomas Anderson’s 2012 film, The Master. Ironically, however, Dodd and his family are cult leaders who travel around the country in the attempt to indoctrinate people into The Cause. The Cause is a faith-based philosophy practiced by Dodd and his followers as a means to provide a meaning of life. It is while Dodd is conversing with the ever wondering Freddie Quell (Joaquin Phoenix) that he shares this thought. Freddie was the perfect candidate to join The Cause, recently home from his military service in WWII, with PTSD and alcoholism as souveniers preventing him from keeping a job or a romantic partner. Freddie believes he is navigating his own life, without serving a master. The truth is, Freddie, like all of us, has a master controlling him, only his master resides within himself.

Freddie’s ego, the force in him that influences his outbursts and inspires his soul to wonder, also acts as his master. The second Freddie feels encroached upon at his jobs, the moment he begins to feel as though he is living for someone other than himself, he leaves. Freddie can never just flee these stifling situations he finds himself in, however, they are precipitated each time by an outburst of anger. Freddie must push away anything or anyone that gets too close to him with intense aggression that will keep others away and remind himself not to get that close again. His ego is one that is dependent upon Freddie’s sense of freedom and individuality, and Lancaster Dodd, the master to many, is not that different. Just as Freddie’s ego drives his decisions and relationships, so too does Lancaster Dodd’s. Even though Dodd lives with the intent to be the master of others and to serve no master himself, he cannot escape his ego.

Dodd is straight-laced, has a calm disposition, and an orderly sense of self. Freddie has an uncontrollable rage, an uneven temperament, and a volatile personality. Dodd and Freddie seem like polar opposites, but as more of their characterization is revealed, one can discern that they serve the same master–ego. It is exceptionally evident in their weakest moments that each man has a bloated ego that controls them. When questioned at an event to further The Cause, Dodd lashes out at the man who does not take his word as law. Lancaster Dodd can control his ego much better than Freddie Quell, but underneath the facade, the two men who couldn’t seem any different are one in the same. This exploration of ego and the extent to which we let it define our lives and control our actions is a constant theme in Paul Thomas Anderson’s films and brilliantly examined in The Master.

In addition to ego and its control over the human psyche, Anderson explores another force that can drive our emotions and actions–belief systems. Many people live with the protection of a doctrine, believing in the edict to which they adhere is a guide for how to live life and give it meaning. Dodd and Quell aren’t ones to need a belief system, as their egos loom too large to give as much faith a belief system requires by definition. These two men are also world-weary enough to understand that the world is too chaotic to submit to the notion that there is a higher power pulling the strings of everyday life. Dodd finds a way to capitalize on the desire of others to believe in something out of their control that dictates their life. Dodd understands why this theory would be attractive for some; if there is some other being controlling them, they can give up control of their lives, therefore, giving up responsibility for what doesn’t work out.

Because of this understanding, Dodd creates his system, The Cause, to give people a belief system designed by himself. Dodd also knows, however, that no belief system will yield the exact results people expect because each person brings a human element to everything with which we interact. There exists baggage and past experiences that each of us carries with us through all that we do, and every ideal we attempt to maintain. Perhaps, this human element is too much to overcome by any belief system or philosophy, and all we can hope for is that which we hold as our inspiration for living life to keep humanity civilized and obedient, resulting in a more comfortable time through our complicated lives. The Master provides another example of the co-dependency and human interconnection Paul Thomas Anderson sees in the world. Each character we meet throughout The Master relies on another, even if they don’t realize it or acknowledge it.

Dodd’s family, his wife, Peggy Dodd (Amy Adams), and his son, Val (Jesse Plemons), are all dependent on Lancaster, clearly, as it is his system, The Cause, that enables their livelihood. What is not as apparent, is the way Lancaster also depends on the two of them. The more time we spend with Peggy and Lancaster, the more we recognize that Peggy is Lancaster’s home base and the only person that can keep his ego balanced enough to gain the trust of the people he attempts to influence with The Cause. The only opinions and ideas that carry any value to Lancaster are those of his wife and son. The family, as internally dysfunctional as they are, operate with a co-dependency that defines their union. There is often a character in Paul Thomas Anderson’s films that utters one line of dialogue that seems to provide a sort of roadmap to what the film is about, at its core.

The moment in The Master that appears to dictate the spirit of the film is when Lancaster Dodd comments on the many titles he holds but states, “most importantly, I am a man.” This statement echoes the interconnection highlighted in the films of Paul Thomas Anderson. Just as in Boogie Nights and Magnolia, The Master sees individuals coming together to create a sense of togetherness, a family to which they can belong. Lancaster Dodd attempts to create that sort of family through The Cause, and Freddie Quell is the best version of himself when he is a part of the family Dodd has created. Despite the many urgings of those around him, the audience witnesses a complete refusal by Dodd to give up on Freddie Quell. Just as most people have all throughout his life, even those within The Cause are willing to write Freddie off as someone unwilling to grow and change his life for the better. Lancaster Dodd, however, refuses to turn his back on another human being, seeing the similarities that bridge each of our lives together. 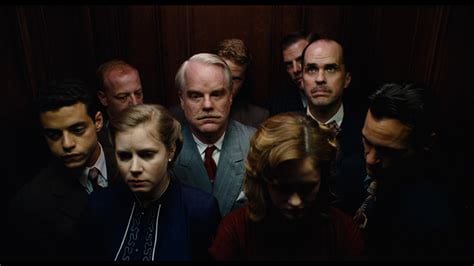 My favorite part of working on retrospectives is the opportunity to stick with one filmmaker and follow their career and progression as an artist. It is incredibly exciting to me to see the themes prevalent in a director’s early work and see if they expound upon them as their art progresses. Paul Thomas Anderson is especially fun to study, because his debut film Hard Eight was so assured. He proved an innate ability from the beginning. One such theme present throughout Anderson’s filmography is the portrayal of his characters as the flawed, faulted people that we all are. Anderson doesn’t make his characters perfect versions of human beings that always seem to manage to resolve their issues within the two hours or so we have with them. Instead, Anderson fleshes out how hard it is to be a human in the world and how, despite our best efforts, it is often ourselves that bring about our own downfall. His characters are idiosyncratic, odd, wondering individuals that don’t fit in with those around them.

Not only do his characters not fit in with others, but they also struggle to find their place in the world around them. Their strife at feeling so ostracized pushes Anderson’s characters into many desperate situations in a feeble attempt to fill the void in them left empty by those closest to them. The Master is the first film that gave me the feeling that this was made by the same person that gave audiences Phantom Thread. The cinematography was gorgeous, the period details stunning, and the score sensational, all of which is what inspired me so much about Phantom Thread to begin this dive into Anderson’s films. Each film I’ve discovered through this journey has only made more clear why Anderson enjoys the esteem he does. The humanism of Paul Thomas Anderson and the intensity with which he experiences the human condition, then places that experience in his films, makes Anderson’s filmography one that is consistently rewarding to visit.