“I wanted it to last, but I knew I couldn’t stay.  For him, for you, for all those we’ve yet to save.” ~Hannah Jones

In my last analysis, I focused on different forms and acts of love.  I argued that although Cole and Team Splinter were pursuing a weapon to kill Olivia with, this was merely a McGuffin, as Jennifer so aptly put it.  The true weapon that everyone will have to use to win their fight against Olivia is love.  Out of all the different kinds of love, I stated that self-sacrifice was the greatest form of all.  Episodes 7-9 focus primarily on sacrificial acts of both love and necessity for the greater good.  Many characters put the needs of others above their own desires, in order that good may win out.  I will analyze every character’s sacrifice in this essay.

In “Daughters,” there is a flashback in which Jones and Hannah both make a choice that may result in them never seeing each other again:

“Long enough to understand and experience all those things which make up a life.”

“Hannah, this envelope, it’s not a directive.  It’s rather, a mssion of choice to be opened only on this date and only after you truly know what I’ve asked you to fight for.”

“Please, Hannah. you must.”

Jones then sends her only daughter, the woman she has spent the entire series attempting to rescue and form an emotional bond with, on a journey that she may never return from.  When Hannah opens up the letter after her violent fight against the two men that interrupt her date, she finds out that it is indeed, a simple request:

I hope by now you’ve lived a life or at least part of one.  I hope you see now what I’ve asked you to fight for:  the good under all its complexity.  And should you choose to continue, to lay down arms to love or to live, I shall not blame you…”

Hannah relinquishes her chance at living a normal life in order to ensure that she is able to find Emma.  Her brief relationship with the bartender has given her a glimpse of the goodness underneath all the fake facades, and so she decides to turn down a potentially normal life in order to save the human race.  It may be argued that Hannah realizes that she does not fit into the former world and thus has given up, but she could always decide to live peacefully on her own in the past and forget the fight.  The fact that she’s willing to let this life go is a great act of sacrifice.  Her decision to do so eventually results in her finding Emma and giving birth to Cole, two events that must take place to ensure causality.

Emma’s decision to abandon the only purpose she has ever known, that of completing Titan, in order that she may live a life that is free of evil and obsession, may also be seen as a sacrifice.  Although Emma is unaware that her presence in the past will help contribute to Cole’s birth, she is willing to throw away her sole reason for living so far because she has come to understand that her mother is a monster, not the loving person she once thought her to be.  This takes extreme bravery and courage on her part.  Her travel back in time allows her to come into contact with Hannah, but she is injured at the nightclub.

Cole’s father, Matthew, lovingly goes out of his way for a stranger in an attempt to rescue Emma but is unsuccessful.  This failure results in him returning to his trailer and building a relationship with Hannah, who he assumes is Marion because Emma called out her name in order to ensure Cole’s birth.  Hannah and Matthew fall in love, and although Hannah deeply yearns to stay and live her life with Matthew, she knows that she must leave in order to retain causality.  When she speaks to Cole in  “One Minute More,” she is talking about herself, not Emma, as we first believe:

“Mothers die for their children.  Yours died protecting you.”

“Lost, I think.  She always said she felt trapped between two worlds.  The one she was raised in and this one.  She grew up without her mother.  Never knew her father.  I don’t think she realized how much that had shaped her until she was faced with the idea of giving you up.”

“So she left and handed me off to my dad with nothing but that bullshit story.”

“No, the story’s not over yet, James”

She sacrifices both her love for Matthew and son for the world.   Then, in her final sacrificial act, she takes a bullet for Cole.  In the final scene of “One Minute More,” Jones and her daughter and grandson, Hannah and Cole, share one last moment together, all of them aware of Hannah’s final fate.

“Hannah is fine, Jones. Wherever she is, she’s okay.  None of that shit was real.”

“The fear of losing and the memory of loss is no less painful than the moment itself.”

“Then why didn’t you give it up sooner?”

“I needed Olivia to feel as if she’d earned it–a lesson she once taught me.  The only difference:  I learn from the past.  She runs from it.”

Putting herself through that kind of pain and agony for the benefit of her friends and mankind is a tremendously heroic act.

Jones’ sacrifice allows Cole and company to travel back to medieval times (not the attraction, as Old Jennifer jokes), but before Cole can use the machine, Jennifer blocks his path and insists on splintering first:

“Wait, no, wait!  If you’re the-whatever-the chosen one, you can’t go first.  It’s too risky.  Adler’s right, we’re blind.  We’re in the fog.  And I have always been your seer, from the beginning.

“No.  That’s my role in all this.  To make sure that you get where you need to go.  So you follow me this time.”

Jennifer knows that she’s taking a huge risk.  As Adler told the group, they’re in the fog.  They may end up in a different time than they’re shooting for or even a different location.  They’re not even guaranteed a return home.  Jennifer’s love for her friends has allowed her to take a leap into the unknown.

Eventually, the whole group, plus Jennifer, find themselves climbing the stairs in order to ring the bell.  They reach the “weapon” which appears to use Splinter technology.  Using their bell to create a paradox with the one on the pedestal, they activate the machine.  But Olivia’s arrival results in the group’s capture and the destruction of the weapon.  The team is lined up, knees on the ground, and death seems imminent.  Olivia calls for Cole’s head, and he’s about to be brought to her when Deacon interrupts in order to save Cole’s life:

“We honor time with patience.”

“But Jesus Christ, you dishonor it with your endless speeches!  Your Red Forest?  Your perfect moment?  Yeah, it’s dinner theatre.  It’s a one-woman show for – let’s face it – a one-woman audience.”

“A man who turns once, turns twice.  Your loyalties were predictable, Teddy.  Playable.  You wanted a purpose?  I gave you the one I needed you to have.  To bring them here…to me…to die.  My toothless bloodhound.  You gave away everything you could have been.  For what?”

Deacon surely knows from the moment he opens his mouth that he’s sacrificing his life.  He would have to be a fool not to realize this, and we know he’s highly intelligent.  He’s come so far from his selfish and evil tendencies towards the beginning of the series.  Now he’s willing to give up tremendous power in order to die for what he knows is a benevolent cause.  His conversation with Olivia and the execution buy enough time for the time suit to turn up so that Cole can use it to rescue the party.  Tragically, Olivia’s team paradoxes the temple after Cole escapes with everyone, so Cole is unable to return to the site and rescue Deacon before he is killed.

The chalk marks that Jennifer leaves on the wall at the end of “Demons,” by sacrificing a great deal of energy, no less,  are deciphered by the crew in episode 9, “One Minute More.”  They turn out to be a collection of all the time jumps that Cole has made throughout his journeys, although Team Splinter does not notice the significance of this particular detail when they first solve the riddle.  They discover the date for the day the virus was released in the  JFK Airport, April 3rd 2018, only to arrive too late.  They return earlier, grab the vial from the lab, and return to the hotel to find Hannah waiting for them.  After a brief, yet heavy, conversation, the group concludes that they were sent there by the primaries not to stop the plague but to release it themselves.  Cassie is vehemently opposed to this idea, but Cole convinces her to follow through with the plan :

“No, no.  This whole mission has been about saving 7 billion people, not killing them.  You can’t ask me to do this.  For what?”

“Either 7 billion people die today or everyone dies forever.”

And then later in the airport, he repeats her words back to her in an effort to reassure her:

“Cole…there was a time we made a promise to these people.”

“Just remember what you told me.  Over and over again before we even met.  Sometimes terrible things happen so that great things can happen next.”

Once again, we have revisited the symbolic cycle of history and rebuilding, sin and redemption that I analyzed in my first article.  Cole and Cassie are meant to spread the virus.  As Cassie says, “All this time, it was us.”  This is the largest sacrifice so far, a sacrifice that kills over 98% of the earth in order to ensure the survival of 2%. 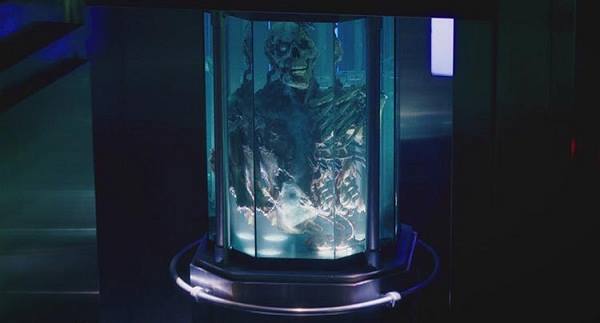 But the most devastating sacrifice that just might have to be made is that of Cole himself.  Once Jones, Adler, and Jennifer discover that he is the Djinn, they conclude that the “weapon” that the group spent so much time searching for was meant to erase Cole’s existence.  Now that the weapon is destroyed, will the group need to rebuild it in order to erase Cole from the timeline?  Or will Cole be given an easier way out?  With the way that the themes are lining up, I highly suspect that Cole might have to make the ultimate sacrifice.  After all, as the show foreshadows, the only fate worse than death is having never existed at all.