Mental illness, in all its various shades, was what Season 3 of The Affair was all about. In Season 4, it’s trauma. At least insofar as Alison is concerned, and as we open every episode with a glimpse into Cole and Noah’s search for her (cold opens that get slightly longer each time — this week Noah is the voice of reason as Cole talks to the detective in charge of Alison’s disappearance, and fields a call from Luisa that he desperately doesn’t want to take) it’s hard not to feel her presence lingering on the edges of every episode, even if we spent the hour with the Solloways in California.

This week, however, we stay in Montauk and find out what our favourite east coasters have been up to. Courtney Smith of Refinery29 writes that there’s a calm to Alison’s life that is “enjoyable to be a part of”, and I don’t disagree at all. What is clear is that in both Alison and Cole’s stories this time around, there is noticeably less animosity and friction between them; in Alison’s part, the friction is sometimes focused inward on herself, as she still continues to grapple with Gabriel’s death, while for Cole the friction is unleashed on everyone around him — Bram (the cokehead surfer bum), Ben, and especially Luisa.

But let’s start at the beginning, shall we?

Part One is from Alison’s perspective.

Up until the moment I saw them video chatting, I had almost forgotten that Noah raised Joanie for a couple of years before Alison admitted that Cole was Joanie’s father. It was interesting to see them interacting as they did, seemingly on very good terms. Ironically, it appears as though Alison and Noah’s relationship is the least dysfunctional of them all. Who could have guessed?

At the end of this ex-family chat, Noah tells Alison that he’s sent her a gift card she can use to buy a plane ticket for California for her and Joanie so that they can spend some time together. I had two thoughts about this — one, that Alison and Noah might be on a path back together, which I dearly hope I’m wrong about; and two, that Alison was going to use the gift card to go to the CBT conference in Milwaukee with Ben instead of going to the West Coast, which somehow made me sad for Noah, which is kind of an icky feeling, so I won’t talk about it any more. All seems well for these two, at any rate, and Alison seems happy and settled.

The EMDR conference in Montauk that she was talking about last episode is in full swing when Alison arrives. Now, EMDR is a fascinating if slightly controversial technique that involves repetitive eye movement or some other kind of bilateral sensory stimuli while the subject recalls the distressing or traumatic event that they’re trying to overcome. There is no firm consensus on how it works but it seems effective at reprogramming the brain to view the event in question as manageable instead of overpowering. Alison has come to take part in order to further her career as a peer-to-peer counsellor.

Some personal background here: I have done EMDR before, but I couldn’t continue past the very early stages of my therapy because I was worried that the traumatic memory I was trying to combat would reveal itself as even uglier and more horrible than I could have handled, and I wasn’t prepared to continued therapy with that possibility looming on the horizon. I got the sense from watching Alison that this might have been her fear too; she is tense from the moment we see her at the conference centre. I could be reading into things, but with the way her day went I suspect that Alison came into the conference curious but fearful, and her worst fears played out: during a practice session with Ben (who happened to be in attendance), and in trying to cope with the memory of Gabriel’s death, Alison brings more traumatic memories — this time of a childhood dream she believes was a premonition of Gabriel’s drowning — to the surface and has to forgo the rest of the conference.

Ben swoops in to save the day, again, this time by renting a boat and taking Alison onto the water. His desire to “fix” her problem — a fear of the ocean — comes off as more than a bit creepy, and as he breaks his AA abstinence vow by kissing Alison, the thin amount of goodwill I had towards him began to flake away. Just like Cole in the cold open this week, I don’t trust him… 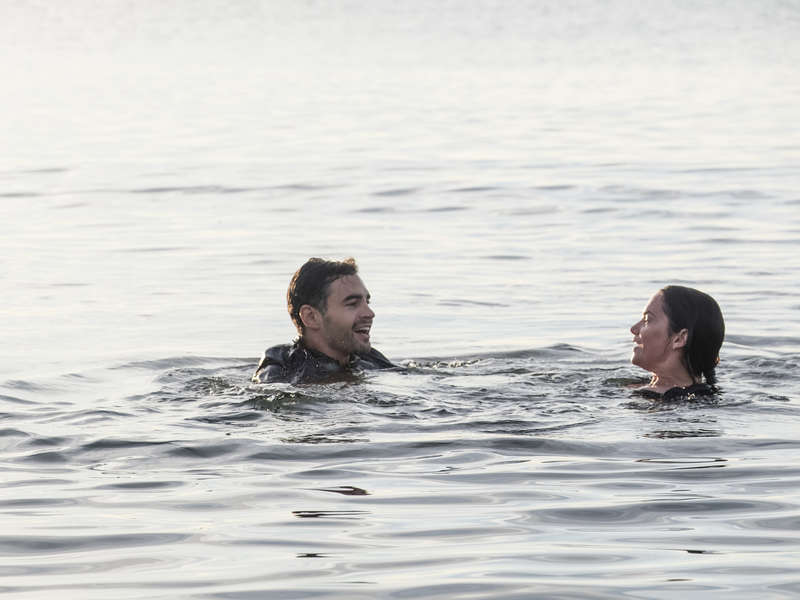 Alison’s part ends with her deliberately falling backwards off the boat and into the water, a serene smile on her face. What follows is a beautiful sequence, in which she floats underwater, watching Ben on the boat, imagining his hands reaching into the water to save her just like in the dream she’s been having since she was a child. Everything in this scene conspired to make me like it, from the colours to the music to the final image of Ben and Alison floating in the North Atlantic (“I’m having a very nice time not having sex with you.”) from high above.

What we learned from Alison’s remembrance of Gabriel’s death is that Cole was there — for some reason I always imagined Alison as having been alone with Gabriel when he died, though I can’t remember why I thought that — and that he was flirting with another woman when he should have been watching the kids on the beach. Alison left to get a blanket, leaving him alone with the other families there. Was she jealous? Did she leave in a huff because of Cole’s behaviour? Is this why she blames herself? And how would Cole view these same events?

“I think there are all sorts of ways of knowing things, Alison,” Ben tells her when she wonders if her premonition could be real, as if that isn’t the best tagline anybody anywhere could have dreamed up for this series, I’ll eat my hat.

Cole’s story opens with him walking towards a backyard campsite in the early dawn. After seeing Alison receive a sunshine-filled photo of Cole and Joanie in the first half of this episode, I half expected to see Joanie and Luisa sleeping in the tent, this being the morning after a summertime campout. So it shocked me to no end to see Cole spray a steady stream of lighter fluid all around the tent and then wake up the sleeping inhabitant by holding the flame from his lighter to the bottom of an outstretched foot.

I wasn’t prepared to see Bram wake up, truly I wasn’t. But I guess this is where we are: Cole, shamed by Bram’s admission that it was Scotty (or another Lockhart, but probably Scotty, because he was an asshole) who got him hooked on coke, has taken this coked-up kid under his wing. With gentle coercion (aka “I’ll set you and your tent on fire if you don’t do this.”) Cole gets Bram to go to an AA meeting with him.

Ben is at the meeting. Cole doesn’t know Ben; Ben doesn’t know Cole. But Cole hears Ben’s story — about two tours in Afghanistan, his addiction to alcohol and cocaine, how hard it’s been to be abstinent but how he knows he has to be because it’s a slippery slope from sex to drug abuse for him — and we hear for the first time that Ben is married with kids. This doesn’t rattle Cole until he sees Ben with Alison later in the episode; for now, the disappointment that another of Alison’s happy things is about to crash and burn stays with us, alone. In Cole’s eyes, Ben is the perfect guy to sponsor Bram, but Ben can’t or won’t — again, because this is Cole’s version of events, and he clearly thinks very little of Ben. In either case, the two men part with little fanfare, only to meet again at the end with tensions running much higher because, surprise surprise, Alison is between them.

Meanwhile, Luisa is applying for U.S. citizenship again, and her plan this time — explained with a near Alison-level of matter-of-fact serenity — is to claim that her deportation would cause undue hardship on Joanie, which would require Luisa to be considered Joanie’s legal guardian, which would also require Alison to relinquish her own guardianship of her daughter and to admit on a legal document that she is an unfit mother. Cole is understandably against this plan, and this — predictably — causes Luisa to question Cole’s loyalty. I haven’t been on Luisa’s side much at all since she was first introduced, but even moreso now I am shocked at how callous and selfish she can be. More shocking, still, is that Cole views her this way — he loves her, but he still sees her as the kind of person who would rip a child from her mother’s arms to further her own immigration goals.

Cole’s conversation with his mother, Cherry (Mare Winningham), dances around the real point of his visit — it’s been two years, and Cherry correctly deduces that Cole is only there because he needs something, indicating just how their relationship has soured in the intervening years — which is that he’s worried that Luisa is right and he doesn’t love her the way his parents loved each other (or, indeed, the way he still loves Alison). Cole learns that his father grappled with things like this too, and that it was all fixed by his “going walkabout” in Morro Beach, California for six months sometime before Cole was born. The news shocks Cole but serves as an inroad for him to patch things up with Luisa, who agrees he should take off for a while and figure himself out.

What does Cole need to figure out? His endless protestations of undying love for Luisa have followed him for two full seasons now. In that time, he’s not only sided with Alison in the custody battle from Season 3 but he slept with Alison too, and, if his fierce protectiveness of his ex-wife in the face of the revelation that her new almost-boyfriend is lying to her is any indication, he’s still head-over-heels in love with Alison too. 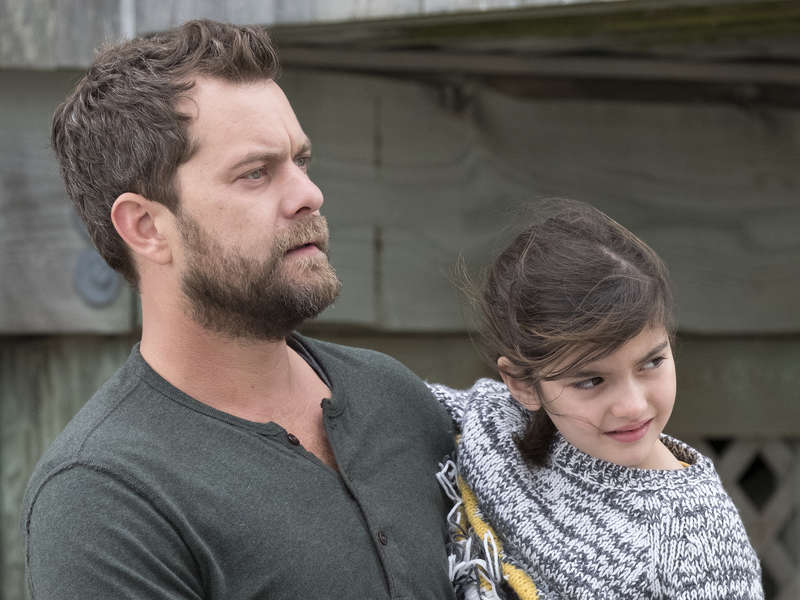 Thus we end the episode — with Cole leaving Luisa and a sleeping Joanie to go on his own walkabout, seemingly in the hopes of figuring out his feelings for Alison and fixing his marriage.

I almost hope for the opposite, honestly.

Is it also too much to hope we’ll be treated to a nice California double date — Noah and Helen, Cole and Alison — at that fantastic Mexican restaurant in Santa Monica from Episode 1?

But hey, a girl can dream…

More From: The Affair