Every person reaches a point in their life where dreams of escape drown out the world’s troublesome symphonies. Be it today’s terrible news or fears for a worrying tomorrow, humanity seems to find refuge in a myriad of fantastic and forlorn places. The times were no less complicated for 1968’s brave souls. Faced with an increasingly changing landscape full of chaos and uncertainty, it was easy to see their reluctance to look out on the deluge. By fate, luck, or whatever word uttered for the sheer act of chance, The Beatles were propelled on their own course towards escapism in a magical cinematic vessel known as Yellow Submarine.

Set in the world of Pepperland, with a bit of Liverpool added for good measure, this tale is far more than an animated film. Instead, it delicately balances the hopes of a generation with the stark realities of 1968. Part psychedelic journey, part unlikely music video vehicle, the event explores reality, conscience, aging, and even censorship while tipping its hat to distinctly British sensibilities. 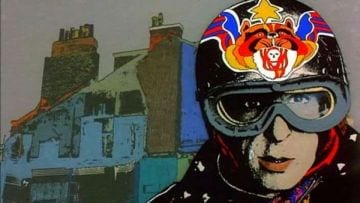 Finding something better is the foundation of any great search for alternate realities. In the ’60s, it was a constant pursuit that led some to the point of no return. For those left behind, the unpleasant truths could be as overwhelming as they were significant. At the heart of Yellow Submarine is a search for somewhere, anywhere, better than the moment’s tempestuous circumstances. The film’s “Eleanor Rigby” sequence is the only glimpse into the real world which lingered around the perceived ideals of 1968. Its very presence utilizes evocative lyrics and haunting melodies to weave the composition into this bleak atmosphere. While the animators themselves may not have been the Fab Four Liverpudlians, there is a sense of realism that bleeds through the interpretations of the song itself. Travels through the sea as well as the actual time spent in Pepperland are almost overshadowed by the early sequence and its conveyance of a place’s real identity as opposed to its perceptions.

As the band navigates treacherous seas on their way to Pepperland, the settings become more surreal, while maintaining the various realities of the period’s pressing topics. Pepperland itself proves to be the pinnacle of realities, but even its vast landscape is undergoing the hints of a darker world not so far away. In the end, The Beatles stage a return past the animated facade of the film’s story. This final tap of the shoulder reminds viewers of all ages that lines blur when faced with the eye of the beholder. 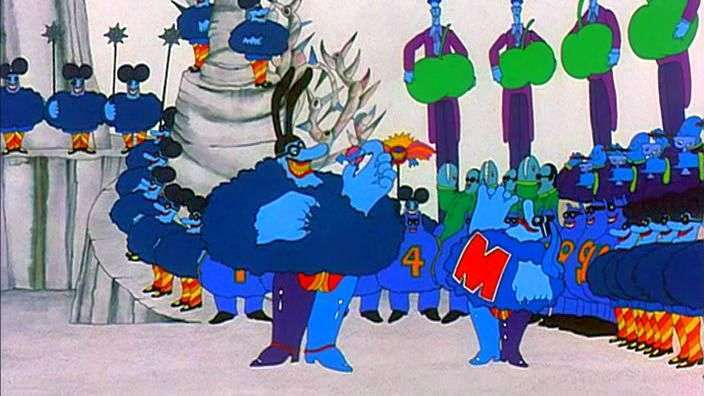 All Villains Can’t Be Blue

People have an unwelcome tendency to turn the things they fear into the very model of villainy. In Yellow Submarine, the villains themselves may be called the Blue Meanies, but there’s a startling amount of humanity hiding right behind the army of garish monstrosities. They are living embodiments of the very ideas populations like to think are kept at bay or entirely void from their collective character. In 1968, that same principle was being put on display with shocking consequences as the Vietnam War raged on a world away and protestors were brutally clashing with police in Chicago. Therein lies both the genius and horrible truth of the fear mongering Blue Meanies, they could be anyone. The forces that seemed to push against love, kindness, dignity, and compassion were in everyone waiting to be unleashed. As if a modern day parable, the film stands as a blaring warning against what people can become if they choose that path.

Yellow Submarine consciously addresses this unraveling of the fibers that join humanity in a surprisingly upbeat way. “All Together Now” provides a sense of completeness, while encouraging the sing along atmosphere that few can deny. Presented by the band themselves, this final song leaves the viewer with a sense of togetherness. The tune encourages choosing love and positivity over the dangerous influences that can linger when these most crucial of emotions are silenced. 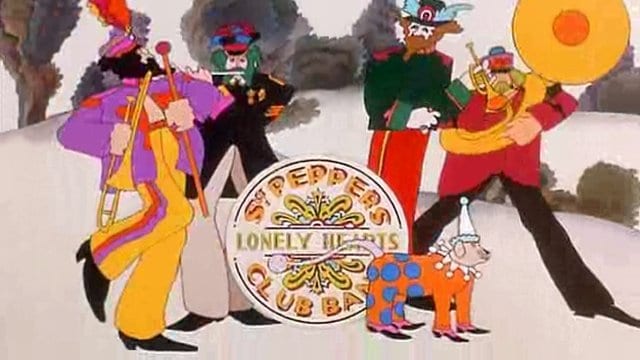 A World Without Music

Censorship is a frightening possibility for any society. At the core, it’s all about suppressing the thoughts, ideas, or aspirations that move against the status quo. The ’60s saw its fair share of censorship attempts, some even aimed at The Beatles themselves. Boycotts, album burnings, and the like permeated the cultural landscape. These mobs of angry citizens tried to drown out the choruses of fans, music lovers, and the open-minded to create a domain that played only by their own rules. It was a direct correlation to the world which Blue Meanies were striving to achieve, whether Pepperland’s citizens wanted it or not. Inhabitants of the psychedelic utopia turn into statuesque figures that can barely contain their terror. The true dread comes from the realization that the frozen few are actually aware of their situation.

They feel the pain and sense the darkness that is enveloping the void. Never is the silent suffering more clear than the symbolic tears of one of the land’s youngest victims. It is a cruel reminder of the decade’s most vulnerable individuals and their lack of a say in what defined their culture. This entire act of systematic destruction sits squarely at the crossroads of a changing definition of enlightenment. In terms of the film’s narrative, there is an irony that the true saviors just happen to be the very musicians that a certain segment of society were eager to silence. The success of the band in freeing the imprisoned shows the power that art truly wields over humanity itself.

The Passage of Time

One of the most surprising features of Yellow Submarine is its acknowledgement of time’s constant presence. It is an element that comes for every decade, but especially held power over the rapidly approaching end of the turbulent ’60s. Kids became immune to the painful realities that awaited their impending adulthood. The generation’s perceptions of growing up were being consumed by apprehensions about conforming to an ever-demanding society. For adults, it was also a reckoning of beliefs or perceptions about the consequences of their decisions. Amongst it all were the concepts of aging in a society that was both coveting and destroying its youth. As they venture into the Sea of Time, the band and the viewer are confronted with a surprisingly topical choice about growing up, growing old, and where our loyalties lie after years of being in the same place.

Set against the whimsical song “When I’m Sixty Four”, this sequence is far more humanizing than it is fanciful. The animation pauses from Beatles-based revelry to show the passage of time in a not so subtle way. Counting every second with crystal clear reality emphasizes the lives well-led, versus meticulously wasted time. It ponders the questions of people’s curious nature towards aging and how it processes the changes often ignored when minutes turn to years. For all its assumptions, the very nature of the segment itself reaches few conclusions and leaves the viewer questioning, if only for a fragile moment, where their own paths will lead as the decades pass. 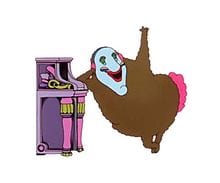 It was easy to feel that a person’s voice didn’t count in the major decisions of 1968. There was a permeable sense that somehow the majority of society was becoming “nobodies” among the growing choruses of dissent. What do you become when you’re completely ignored? The question eloquently leads into the movie’s meeting with a true nowhere man, Jeremy Hillary Boob. He is a strange creature that embodies a world of possibilities both explored and unexplored throughout the realities. His very existence is filled with a range of talents, yet defined by being essentially nothing to the society around him. For many in the realms of ’60s society, there was an uncanny resemblance to the inner core of the character’s meaning. Whether someone was a factory worker or an artist riding a mass of praise, it was easy to be the person who no-one really knew. The feeling that people were screaming for change, hope, love, security, etc., always left them surrounded by the blank white canvas of noise. It was all about whether society choose to hear those voices or push them away for safer, more comfortable factions. Jeremy becomes valuable to the story in many aspects and that simple fact signifies the film’s overall context that nowhere men (and women) are actually somewhere after all. Their contributions can make the difference if people will only allow them to be a part of the outcome. 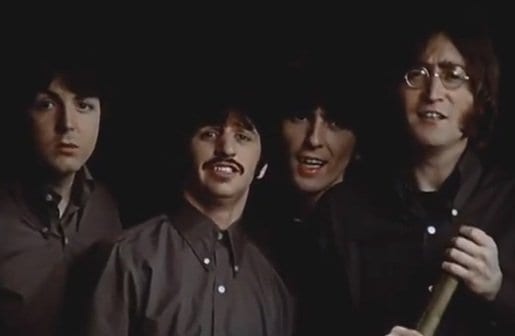 There is something powerful about accepting a stranger into something that is already so familiar. When John, Paul, George, and Ringo encounter their eerily similar counterparts in Pepperland, it becomes a true meeting of the personas we create versus the truth of our real identities. They are at once facing the creations that resulted from their artistic endeavors and also seeing a glimpse into the pure fan-based personas they could never be. In real life, the members themselves underwent their own stylistic and personal changes that make them yet another variation on this manufactured world. It only takes a quick glimpse of the final live action sequence to see how much the Fab Four themselves no longer resemble the animator’s visions for them.

Among the wash of colors and light that is Yellow Submarine, there is a base that is as true to the decade as the band’s own trajectory. The film’s underlying causes, whether intentional or unintentional, reveal the neurosis of a world on the brink of its own growing pains. It is both a visit to more innocent times and a reminder that the future is only as clear as someone makes it.