Rocket science didn’t take off at any rapid pace. We see that through the struggles of Jack and his fellow ambitious scientists, and we see that through the show’s pacing as well. That can be a good point as it illustrates the environment, or it could move too slowly for its audience. Anyone with an off-the-cuff knowledge of Jack Parsons will crave the darker side of his ambition and passions, and we are starting to see that constructed by Episode 5. We didn’t seriously expect it too early, and of course, the occult suggestions of his neighbor Ernest Donovan as well as some of his brief encounters through him have been there from the beginning, but it isn’t until Episode 4 that there is a sense that Parsons is directing his ambitions outside of rocketry. By Episode 4, Susan Parsons has embraced a role as religious prude, refusing sexual activity with her husband without consideration of pregnancy and as lording caretaker over her adolescent sister. Much like I worried after my review of the first episode , Ernest Donovan’s character was perhaps too on-the-nose and forced in his influence on Parsons. I am now worried that Susan’s character has assumed that role. Still, by Episode 4, Ernest Donovan’s character is becoming developed, and there is an understanding that this tension-building characteristic is Susan’s last-ditch effort to grip at faith, at least the conventions of faith.

With the arrival of his wife, Maggie Donovan, Ernest is a beast somewhat restrained. He questions his own ability to show Jack Parsons his promised magic. Behind the curtain at the local burlesque, Parsons is finally ready to assume his destiny, accepting sexual favor, only Ernest finds himself affixed to Parsons’s pleasure. This leads to a violent outbreak on his part, which breaks the spell. While Donovan may be under the assumption that he can obey the tenants of Thelema, some of his complexity comes at his inability to grapple with his suggested homosexuality. The problematic notion on the audience’s part is that those waiting excitedly to see Parsons’s evil turn find themselves rooting for his openness to infidelity, given the context of these characters’ marriage. While I might not frame Parsons as an anti-hero nor reject that framing, the audience’s investment works the same. We root for our protagonist’s corruption. 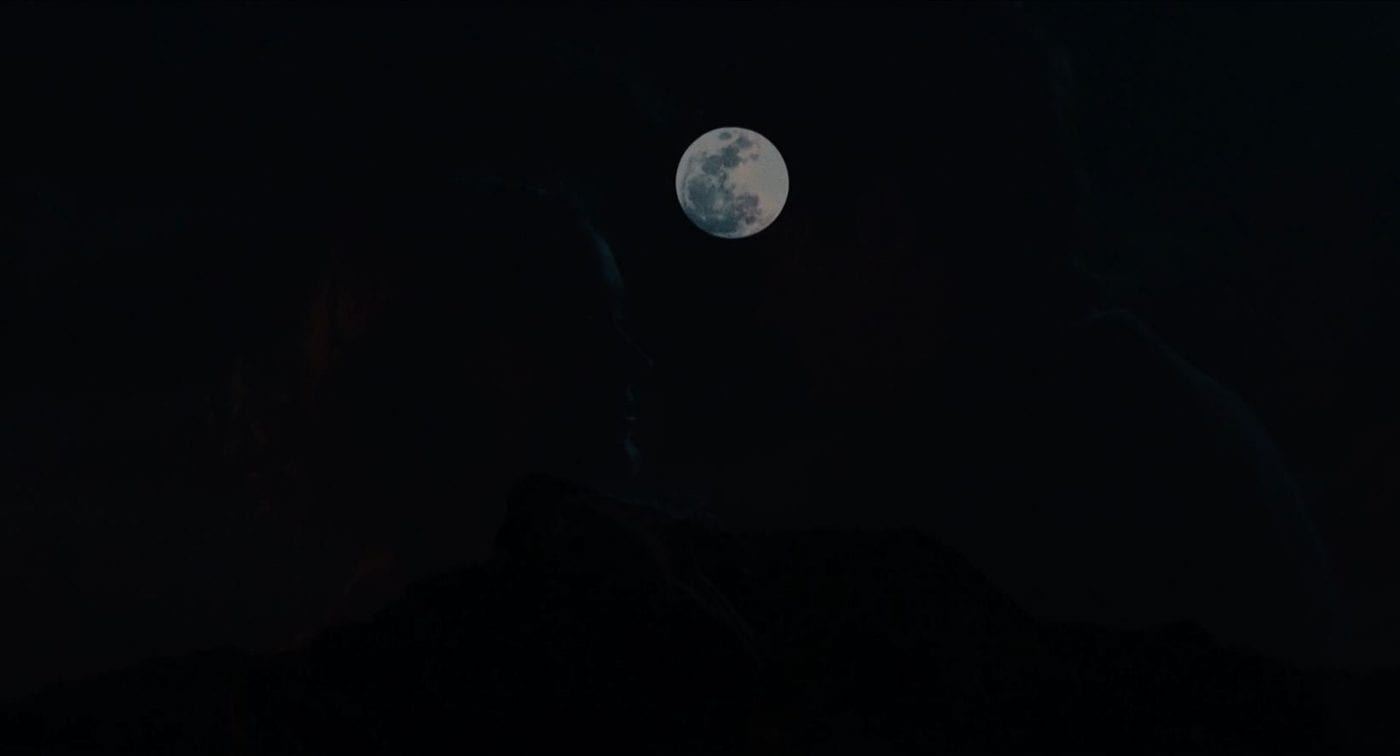 By Episode 5, Parsons and his wife accept a trip to the desert with the Donovans, looking for “anything that looks like a cactus with something sticking out of it.” As I stated of Parsons’s first desert scene in my first review and of Episode 1, “…we see a small and distant full moon behind him, foreshadowing a Moonchild in the conjuring.” Above the campfire, where the Parsons and the Donovan imbibe their medicinal tea, the full moon is closer now than ever.  I admit the transformative mind-setting coming through peyote in the desert does track as a bit clichéd (i.e. Young Guns, The Doors, etcetera), which leads me to my concerns about the show. Jack’s story is one that would always have needed to be told with some patience to achieve its ultimate effect, to create a form of empathy in a wide audience for his person, while making his struggles in rocketry equally exciting. A lot of the transformation would beg to be seen in Season 1, if not the whole, which is a lot to ask of the writers. For me, the impetus for so many of the changes does end up feeling forced in these episodes. It’s something in the curation of the narrative that feels textbook and predictable. 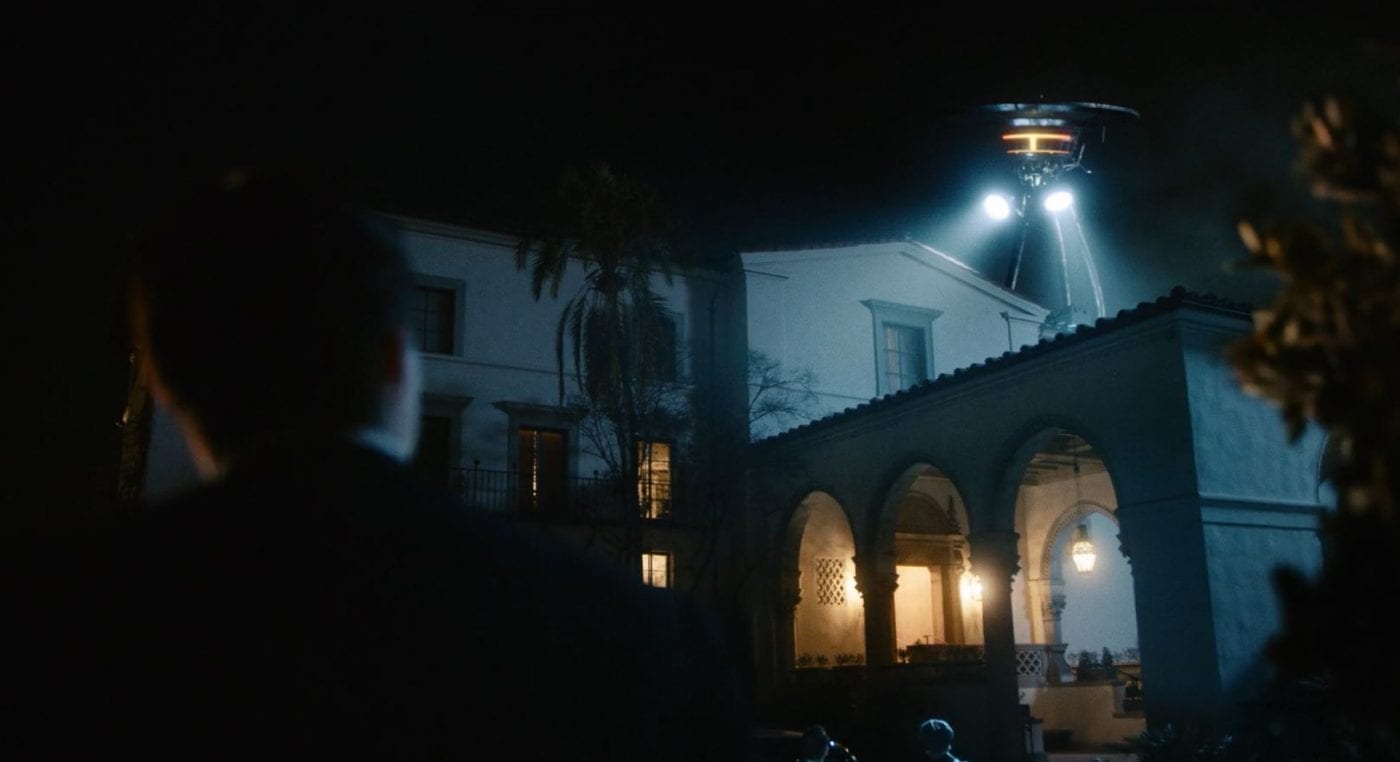 The parts that betray predictability come from a good infusion of that early pulp and science fiction tradition, which happily remain across episodes. There is a charming bit in Part 4 where friend and fellow scientist Richard Onsted picks up Jack to attend a prestigious University VIP party, but first he turns on the radio, where it is being broadcast that invaders are attacking. Outside of the truck, we see that it is Halloween when we realize they are hearing Orson Welles’s 1938 broadcast of War of the Worlds. Turned away from the party, Jack begins envisioning the tall, octopus-like invaders from the story beaming down on the party, attacking the traitorous guests who run for escape. His pulp imaginings follow him on his peyote trip in Part 5, where he envisions himself crashed on the moon with his father visiting him. This scene lasts perhaps too long, and it is one moment where I appreciate its visuals and science fiction infusion—it could almost be a Dr. Manhattan scene from The Watchmen—but acutely feel its distraction. It is one of the many examples of Jack’s transformation not being allow to play for us with any sense of reality. At least for this writer, the attempts to convey Jack’s mind frame through such stylization removes me from the biography this show is based upon. Of course, 25YL is committed to seeing the show out with its potential—we are only five episodes in at mid-season—and will return with a review of the finale.