Part 10 ends with Rebekah Del Rio singing “No Stars” — a song that references a starry night where it all began, but to which one cannot return. It is a quintessential statement of the kind of anti-nostalgia Twin Peaks: The Return engaged in. This may be a return, but it is not a comeback. You can’t go home again.

What struck me most in rewatching Part 10 now is the way in which it is structured around the theme of betrayal. It is hard to say to what extent this applies when it comes to Richard Horne attacking Miriam, but they at least seem to know each other. Other examples are more straightforward, though, even if something like a continuum suggests itself. Steven assaults Becky in their trailer. Richard assaults his grandmother Sylvia. Tony Sinclair goes along with Duncan Todd’s plan and tries to get a hit taken out on his buddy Dougie. Chad betrays the Sheriff by stealing Miriam’s letter from the mail. And, this is the episode in which we learn with a degree of certainty that Diane has betrayed the FBI by passing information to Mr. C. 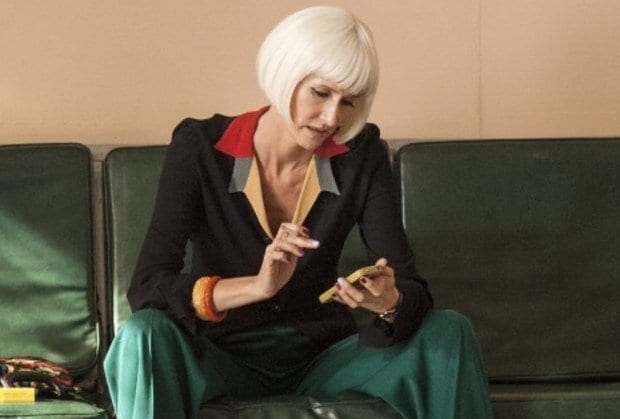 What I have to say about Diane now, though, will certainly be a bit different, now that we know the whole story, or as whole of a story as we are going to get. I can no longer try to question whether Diane was really working with Mr. C, or under his control. I have moved instead towards a more thematic reading of this tulpa as representing a certain thought about trauma, which would frame this plot arc in terms of a thought about gaslighting. I’m still on team Diane.

What’s this bit about Mexico, though? This strikes me as a question that got lost amidst all of the other questions we were led to think about. Last we saw Mr. C, he had gotten out of prison with that fucker Ray, gotten shot, and proceeded to walk to meet up with Chantal and Hutch. Every indication is that all of this occurred in South Dakota, or maybe Montana. It’s hard to be sure about the precise location. But it is pretty easy to be sure that it was not Mexico.

Before Albert arrives to inform Cole about Diane’s text messages, we see Gordon drawing what looks like an arm reaching for a dog with antlers. Some have suggested a similarity between this image and that of BOB’s arm reaching out from the Lodge at Glastonbury Grove, but I have to admit this still strikes me as more of an enigma than anything else.

When Cole opens the door to his hotel room, he sees Laura Palmer. To be precise, he sees the image of Laura when she arrives at Donna’s house after discovering that it is her father that has been raping her. But is this image inverted?

Gordon, are you my best friend?

Gordon and Albert may not be brothers, but they are close. Recall that when Denise asked Cole if Albert was going with him to South Dakota, he replied by asking, “Do birds fly?” They have been working together for decades now, and it strikes me how good of a job Lynch does at portraying how their relationship has settled in. Albert looks over his shoulder after noting Cole’s odd expression when he answers the door, but he doesn’t ask about it. Gordon will tell him about it if it’s worth telling. The Chief is an odd fellow; just roll with it.

But a lot of Part 10 is about brothers. The Fuscos only appear in news footage of the arrest of Ike, but the Mitchums take center stage. We first see them as Candie desperately seeks to swat a fly, which ultimately results in her hitting Rodney across the face with a TV remote.

Is this another betrayal? Candie certainly seems to experience it as such, as she cries inconsolably, wondering how they could ever love her again. She won’t even accept the offer of a martini. How does this relate to her disposition the next time we see her, though, in the casino (when Anthony comes to visit)? You know, when she talks about how they will be in the version layer?

Anthony tells the Mitchums that they have an enemy in Douglas Jones, in a way that is so ham-fisted it almost surely would not have worked had they not already been primed to accept this information. But, given that they have been primed by the Mr. Jackpots affair, and so on, they believe what Tony is saying so readily he himself seems surprised.

Then, the Mitchums are at home. Rodney says he now knows how Brando felt, which I take to be a reference to The Godfather, though I continue to feel like I should be able to be more specific than that. Then the two say, almost finishing each other’s sentences, “You fuck us once; shame on us. You fuck us twice, shame on you: you’re dead.” These two are brothers. They are on the same page. And, it is striking to me in revisiting it now just how terrible they seem. I recall thinking last year that Candie was a victim of abuse, perhaps suffering from Stockholm syndrome, and so on. To what extent should that feeling be altered by what comes later, and to what extent was it on the mark?

Speaking of abuse, the scene in this episode that remains the most powerful in my mind is that wherein Richard Horne attacks his grandmother Sylvia, while Johnny looks on, helplessly tied to a chair. I maintain that what he wails is “Mom” despite the fact that the captions merely say “[groans]” — it is a heart-wrenching scene that is filled with a strange power through its brutality. “Why do you have to make something so simple so fucking difficult?!” Richard asks his crying grandmother as he heads out the door. One can imagine a similar question being leveled at Lynch and Frost.

Besides being powerful in its own right, this scene manages to refer to several other things at once. The face on Johnny’s bear is a clear allusion to Lynch’s own Dumbland series, and the music that plays as Richard abuses his grandma was previously used in One Flew Over the Cuckoo’s Nest, in a scene with some interesting resonances to Twin Peaks. For me, at least, it further brought to mind the famous assault in A Clockwork Orange, which is accompanied by an amateur rendition of “Singin’ in the Rain.” Fuck Gene Kelly, indeed.

The last scene of the episode (before Del Rio’s song) is Margaret Lanterman talking to Hawk again. This is where she tells him that the Truman brothers are both true men, and that the others are also his brothers. This episode is not just about brothers in a literal, or biological sense, that is, but about brothers more figuratively. Gordon and Albert are brothers, for example. Who are Hawk’s brothers? All of those who share the path with him: probably Frank and Bobby; certainly Harry and Andy. And Cooper?

Margaret tells Hawk that “Laura is the One,” repeating a line from the Log Lady intro to the pilot. Here is the full text:

To introduce this story, let me just say it encompasses the all – it is beyond the “fire”, though few would know that meaning. It is a story of many, but begins with one – and I knew her.

The one leading to the many is Laura Palmer. Laura is the one

And the full text of what she says here in Part 10:

Hawk. Electricity is humming. You hear it in the mountains and rivers. You see it dance among the seas and stars and glowing around the moon, but in these days the glow is dying. What will be in the darkness that remains? The Truman brothers are both true men. They are your brothers. And the others, the good ones who had been with you…Now the circle is almost complete. Watch and listen to the dream of time and space. It all comes out now, flowing like a river. That which is and is not. Hawk. Laura is the one.

Take that as you will, but it seems important to me; or, at least, as something interesting to think about!