We finally know whether Helen and Sierra make a connection (they do) and the whys and wherefores behind Noah and Cole’s (and Anton’s) journey to find Alison. This was an episode that balanced intense female empowerment with the overprotective needs of the men in Alison’s orbit to look out for her. It was also heartfelt and, in turns, hilarious.

No cold open again this week — I suspect those are gone now, in favour of the straight-up storytelling we’ll presumably get whether we see Cole or Noah’s version of the story (or, please I’m begging you, Anton’s) — so let’s dive right in.

Part One is from Helen’s perspective.

Remember Helen back when she and Noah were still together and she was trying and failing to keep that marriage going without really knowing why it was falling apart? This Helen returns for a split second in her first scene this week, where she’s just trying to find the Medjool dates, people, not hear your sister’s recipe for overnight oats!

Maura Tierney is wonderful as the harried New York transplant, and as much as I loved her turn as the beautiful, calm wise woman last week in Alison’s ongoing drama, it is always delightful to see her snap incredulously at the ridiculousness of Californians, and we get a lot of that from her this episode.

But it’s interesting to see her playing the same character from however-many-years-ago it’s been in the show’s timeline (is it 8?) since she and Noah first went to Montauk. Vik is dying and disillusioned with his life, especially now that Helen is in menopause and her chances of having another child are diminishing greatly with each day. On top of that, her friendship with Sierra — already rocky following Helen’s angry refusal to go to Joshua Tree with her a few weeks ago — feels doomed from the get-go since Sierra slept with Vik two episodes back. So, Helen is literally being stepped out on once again and doesn’t know it.

Though, honestly, I’m not sure it would have made a difference to her here, as Helen admits her life is off the rails anyway and I think she would have literally said “Fuck it!” and gone to Joshua Tree with Sierra even if she knew that Sierra had screwed around with Vik.

What follows was framed very interestingly. Against the backdrop of a “moon circle” — a ritual (well, ritual-adjacent, in this case, as we find out) way for women to connect with other women and to harness the power of their own intentions to change their lives. The moon cycle connection is a conceit that gives this an air of antiquity, but as Helen finds out, Sierra has no clue what matriarchal society means or how it works. And over the course of their journey into the desert, it turns out that Helen is the wisest one there, supplanting “guru” Gael during dinner that night. 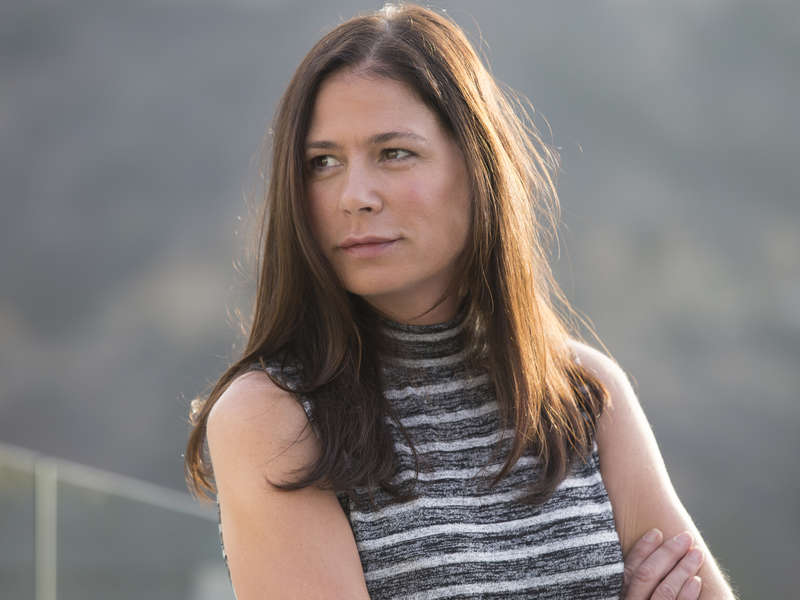 It’s a role that I feel Helen has definitely earned, by virtue of all the crap she’s been put through (by herself and by others) over the course of her life. Helen’s acerbic take on the California New Age lifestyle is hardly groundbreaking, but it felt very authentic to see an older woman embrace the path she’d taken to get where she was and to be able to impart real wisdom on a group of young women struggling to figure out what Helen had taken a lifetime to learn. It felt a little bit like an unfair condemnation of the younger generation’s eternal quest to find meaning while they’re still young, but it felt very powerfully moving, just as it was to hear real women’s concerns (about everything from whether or not children will ruin a woman’s life to trying anal sex) expressed so openly. This was a moment of femininity, both sacred and banal, and it was treated with tremendous respect.

Following this, it would have been profoundly disappointing for Helen and Sierra to not hook up that night. As it was, the feminine power of the dinner table was brought into their yurt, where Sierra’s growing fear about never being needed and Helen’s relief about the onset of menopause collide. Sierra’s reasoning for sleeping with other women is that there’s something primal in that, and seeing it happen for her and Helen made that real.

Unfortunately the vacuousness of the whole thing is revealed in the one-two punch of Helen chastising Sierra for sleeping with married men (Sierra confessed as much, without naming names, on the drive out) after stepping out on Vik with Sierra moments earlier, and the arrival at the promised “sensory deprivation tank” location only to find it looks more like a SoCal pool party. The women of the moon circle do cocaine, and Helen watches with the curious detachment she’s known for, leaving us to see that none of this is really going to matter for any of them in the long run. The spell of the desert is broke. Helen does the tank, she panics in the tank, she is released from the tank, and she drives right back to Vik, where she begs him not to die. And he promises he won’t.

Which absolutely means he is going to.

Noah’s half of this week’s episode was less enthralling, which is probably a good thing since Helen’s was so powerful and there’s not a whole lot going on for Noah at the moment, so forcing profundity into a lackluster plot would have been very obviously contrived.

What has become clear is that Noah’s connection with Anton seems borne out of a need to connect with own kids, something that he accuses Helen of sabotaging right before she tells him that Vik had cancer. I’m not a huge fan of feeling sympathy for Noah, but it was hard to watch him be shuffled to the side while also realising that Trevor’s anger is very likely the result of dealing with Vik’s diagnosis as well. Noah is every bit the absentee Dad he didn’t want to be, and Vik has stepped up in a way Noah simply can’t, which is what makes Noah’s stepping into Anton’s life and fulfilling the role that his own father Carl (Russell Hornsby) is unable to fill so much more baffling and understandable at the same time. One can only hope that Noah would realise what he’s doing…

…But no, of course he doesn’t, because after offering to take Anton to Princeton in order to prevent him from signing up for the Marines, he confesses to Janelle that, yes, he thinks Anton is brilliant, but he’s not doing all of this for him; obvious subtext is obvious.

In any case, with Janelle’s blessing (and after they finally have sex — I have to admit it was fun to watch them together; “Does it turn you on that I’m your boss?” Janelle laughingly asks has got to be one of the best peri-coital lines spoken on this show since the time Helen made Vik wait to orgasm back in Season 3!), Noah takes Anton to New York via Chicago, and when their flight is delayed on account of bad weather and they are unable to reconnect by plane or car, help arrives in the form of Cole Lockhart, and a few more pieces fall into place.

We don’t know yet what the cicrcumstances of Alison’s disappearance are, but it’s bad enough to force Cole to call Noah. Their forced handshake is the most cordial they’ve been since they first met back in Season 1. I’m really curious to see where this takes them.

More From: The Affair