Inherent Vice reminds me a lot of David Lynch’s Inland Empire. Both films are sprawling, often incoherent character studies set in Los Angeles, stripped of the typical glow the city promises. Neither film lends itself well to a plot synopsis or an easily understood summary, and are better approached as experiences rather than casual film viewings. The same gorgeous cinematography and deliberate camera movements I have come to expect from Paul Thomas Anderson’s films are present in Inherent Vice. Also present are the fully-formed, flawed characters, who are often the agents of their own downfall. The setting in Inherent Vice is a rich character in itself, but the vivid luminescence one would expect from the southern California sun has been stripped away. If Inland Empire is where the L.A. dreams turn into nightmares, Inherent Vice is where those dreams turn into heartbreak. 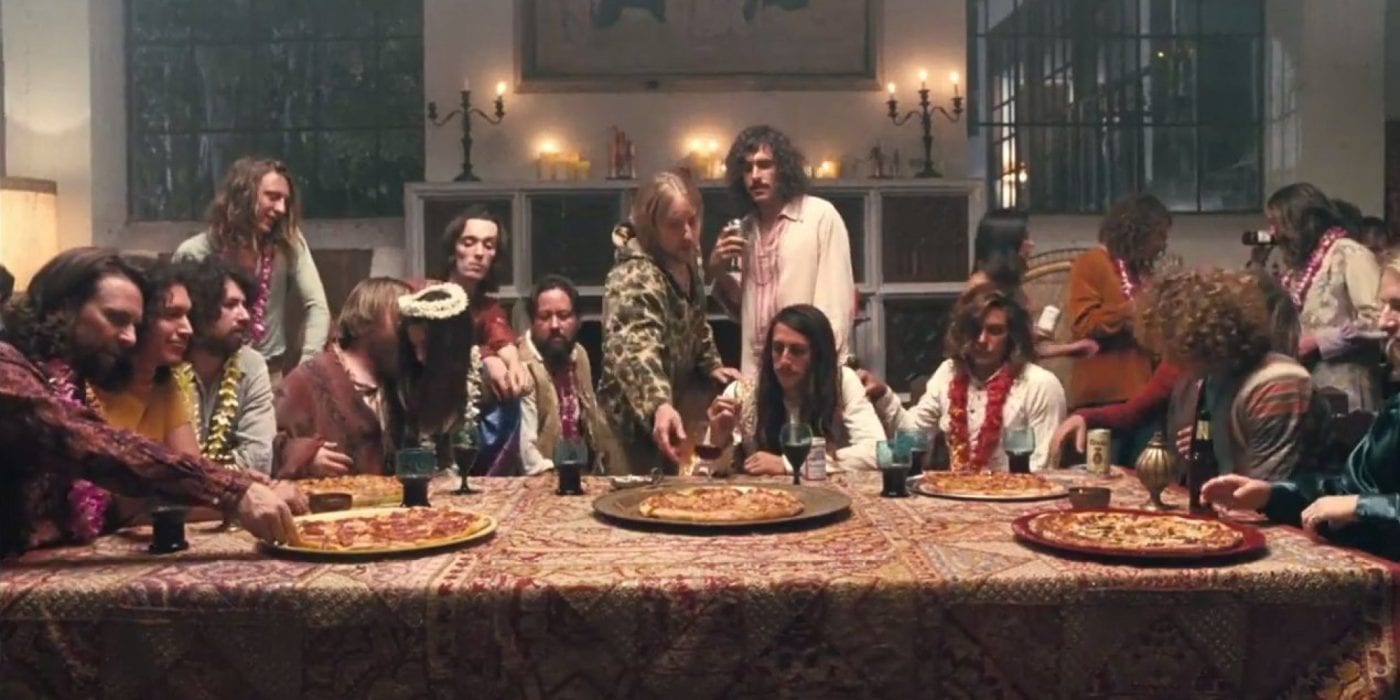 Paul Thomas Anderson films are a vehicle for observing the human condition and to better understand the motivations that drive our decisions so we can comprehend why people are the way they are. That is one of my favorite aspects of P.T.A.’s films that they’re not prescriptive, there is no expectation that you’ll leave the film knowing what to do or how to act. There can be no action without understanding, yet the motivations are not as thoroughly explored in many other movies, or at least studied as wholly as they are through the films of Paul Thomas Anderson. The lens through which we view Inherent Vice is Doc (Joaquin Phoenix), a self-proclaimed hippie who enjoys filling his days smoking marijuana and chasing leads as a private eye. When Doc is approached by his ex-girlfriend who finds herself in a complicated triangle, Doc devotes all of his resources to her case. Shasta Fay Hepworth (Katherine Waterston), the great love of Doc’s life, believes her married boyfriend is being targeted for abduction by his wife and his wife’s lover.

This case proves more than Doc’s unconventional solving routines can manage, as he is soon dealing with multiple disappearances, including Shasta’s, and a motley crew of individuals each leading him in a different and independent direction. Never too far behind Doc is his arch nemesis, Det. Christian F. “Bigfoot” Bjornsen (Josh Brolin), a straight-laced LAPD detective who will destroy Doc’s property just as quickly as he’d take a shot at Doc to keep him down. As Doc chases his leads and inspirations throughout the film, the audience is reminded of the power of love and the lengths one person will go for someone with whom they have made a genuine connection. Similar to Boogie Nights, Inherent Vice illustrates a collection of people whose lives just happen to them. They go with the flow, to a fault, unsure of what else to do with themselves. Their days pass, each of them acting similarly to the day before, going along with the path they’ve embedded in the ground uncertain of how to change course. Doc leaves his inspiration untethered following each half note he writes to himself or word that he hears that stands out to him, hoping it will lead to a break in the case he’s working on at the time.

Likewise, Bigfoot follows Doc each day, just as he did the day before, convinced that he is not doing his job unless he’s impeding Doc from doing his, or trying to get Doc to join him as an informant. Neither character, it seems, has ever lived a different way. There is no sense that Doc ever wanted to do anything other than what he is doing now, or maybe he just never knew how. Some people aren’t made for the world as it is, and perhaps Doc’s calling was one that planet earth in 1970 couldn’t answer. Despite Doc and Bigfoot’s starkly different sensibilities, Anderson doesn’t display either of them with any shortage of empathy. Even in the face of all the damage done to Doc and his belongings at the hands, or feet, of Bigfoot, Doc regards him as a part of his life rather than something to rebel against. Doc knows Bigfoot will always be in the shadows and though he’s never overjoyed to see him pop in and delay his progress, he never runs away or otherwise tries to avoid him. 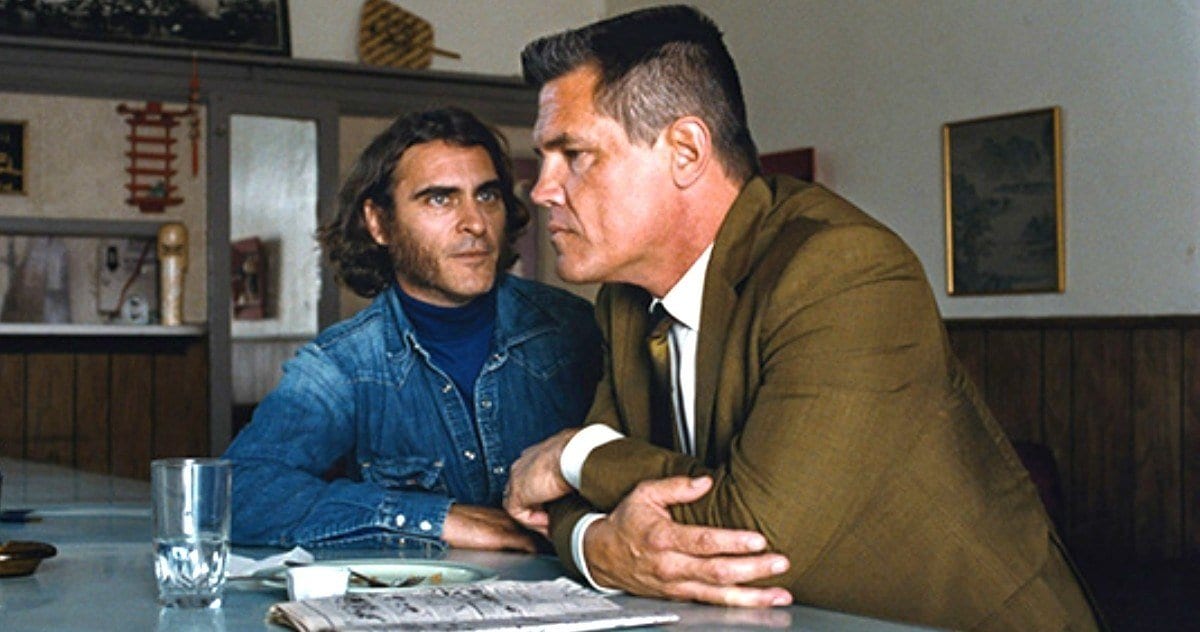 On occasion, the proximity the two share to each other and their work are mutually beneficial, and information sharing helps them both follow leads in their own way. In typical police fashion, Bigfoot investigates concrete clues or evidence whereas Doc works with inspiration as a guiding light, yet both methods yield results, of sorts, for each angle the men pursue. Perhaps this is to suggest that two opposing sides can offer insight and understanding into the motivations of the other. The crew-cut coiffed by the book Bigfoot and the long-haired pot-smoking Doc could easily represent any two sides of a debate, or perhaps, of one’s nature. Certainly, the same person could have shades of Doc and Bigfoot within themselves at any given time, each side taking over as it is needed and receding when it isn’t. This is the magic of a Paul Thomas Anderson film; we’re never given a blanket victim in his movies because each character is constructed in a fully-formed way and we are invited to see within ourselves aspects we don’t like about the character on-screen.

Even if we don’t detect any of the attributes displayed on-screen as ones that we too possess, we are unable to dismiss them because Anderson has fleshed them out so well that we know the motivation that is driving each character’s actions. We know that, despite his questionable methods, Bigfoot is trying to do what’s right both in his police work and his life, just like Doc believes that his unorthodox methods are what’s best to piece together the pieces of the puzzle he has been presented with. In life, just as we see at the end of the film, it is a combination of opposites that yields beneficial results. 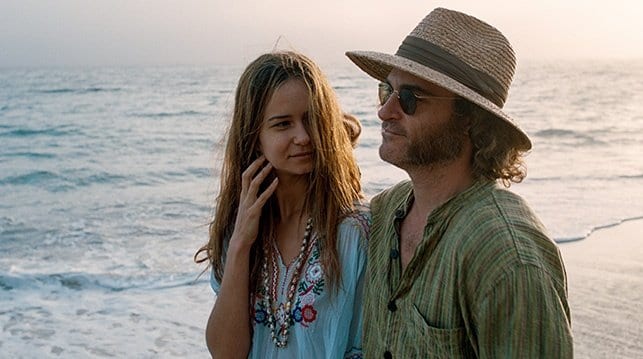 Just as the washed out setting of Los Angeles took on the role of a character reminding us of a faded yet present love between Doc and Shasta, so did Paul Thomas Anderson’s camera movements. Modest shots and long takes fill the film, reminding the audience of the simplicity of Doc’s life method of waiting for inspiration and going with the flow. The scenes are scattered without an especially congruous way to bridge one scene to the next; this isn’t to say that the film is unfocused, instead, that we are watching it unfold in the same way as our vehicle of understanding, Doc, glides through life. Doc is continuously under the influence of drugs, and the way the audience perceives the film is similar to Doc’s fragmented reality in-and-out of consciousness. His journey is our journey, and P.T.A.’s ability to capture Doc’s perceptions and structure his film around them speaks volumes to his brilliance as a filmmaker. Where Paul Thomas Anderson also shines as a filmmaker is through his mastery of commanding the ensemble film.

Similar to Magnolia, Inherent Vice brings together many big names that you would never expect to see together in parts where the actor truly shines and is given their due. Even if the actor is only in the film for a cameo, they are given full agency and steal the scene. Martin Short plays a cocaine-addicted dentist in a couple of scenes in Inherent Vice and completely embodies the world of the film. Reese Witherspoon makes an appearance as a defense attorney who is also having a sexual relationship with Doc, the two are playful and often share information with each other. Benicio del Toro plays a small role as Sauncho Smilax, an attorney who shares information with Doc pertinent to his case. The film also features a brief appearance by Owen Wilson as yet another person who helps Doc, connecting him with the next piece of the puzzle needed. Each of the moments spent with the minor characters, no matter how brief the scene, is the opportunity for them to shine.

Paul Thomas Anderson’s every-player-is-essential brand of humanism, coupled with his incredible ability to highlight negative attributes of human beings without demonizing the character they belong to, is part of what makes his films resonate with viewers in such a profound way. Inherent Vice presents, in a blatant way, something that Anderson has injected in each of his films, the notion that no matter how different we are, we occupy the same space. Each of us needs each other because we are all part of the richly communal experience called humanity. There’s enough room for all the Doc’s and Bigfoot’s of the world if we can only learn how to look upon our neighbor through the same lens that Paul Thomas Anderson uses when making one of his films… the lens of observation and understanding.