I recently had the pleasure of speaking with Larry Clarke about his role as Detective T. Fusco in Twin Peaks Season 3! Larry was gracious with his time and hopefully you enjoy our conversation!

MH: How did you find out about the role in Twin Peaks and what was the casting process like?

LC: I was submitted for the role. They interviewed me for 20 minutes. They just wanted to see people be natural, hang out and talk about other things. He (David Lynch) casts off whether he likes you, likes your look. I just jabbered on for about 20 minutes and found out about 6 months later that I got the part.

MH: Were you a Peaks- fan before getting the role?

LC: No, I wasn’t. David’s films are kinda creepy and I’m not a big creepy movie fan although I’m a huge fan of Blue Velvet and The Elephant Man. I do like that part of his work.

MH: Due to high levels of secrecy, a lot of actors didn’t actually know they would be appearing in Twin Peaks until they arrived on set. Was this a similar experience for you?

LC: No one knew the script, no one knew anything about the story. All of us were mentioning characters that we knew nothing about. David didn’t fill us in. He would actually give us things like — “This is a really bad guy” or “This isn’t good” — that kinda stuff but he kept it very mysterious. I heard that only Kyle and Peter Deming were allowed to read the full script. Super, super mysterious.

MH: How was your character explained to you?

LC: The character really wasn’t explained. David met us and he said “You’re brothers and you’re all named Fusco”. It wasn’t originally that way in the script, we all had separate names. He would explain before each shot what was going on but you didn’t have any time to build the character or anything. He doesn’t like that. He kinda likes to put actors off, see what they come up with in the moment and take their time. I think that’s why he gets such interesting performances.

MH: What was it like working so closely with David Koechner and Eric Edelstein? Had you ever worked with them previously as the rapport you have on screen together is perfect?

LC: I had never worked with either but we hit it off right away. We were in Koechner’s trailer for about an hour before heading to set. We were talking about business, life and how everyone’s making movies and I actually put them both in my next feature movie which I shot right after Twin Peaks. They’re amazing in it. They’re great guys and we did become brothers of sorts. We really hit it off and hung out a lot and have hung out away from set now too. 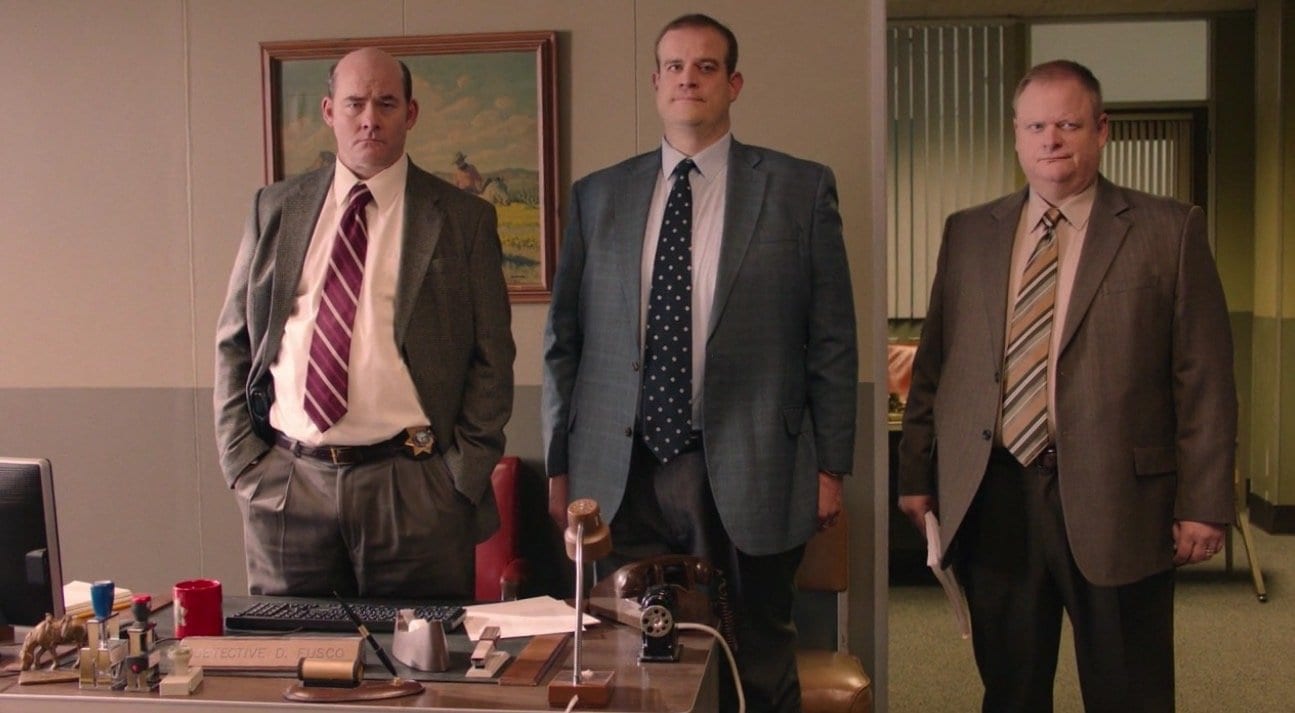 MH: Given that you always worked as trio in scenes, did you have much input into the way your characters acted on screen or were their personalities already set in stone?

LC: We had very little input. David likes to surprise you so he tends to kinda roll the camera. He also likes to set people in kind of an awkward place and tell you to go. I thought that was interesting. Sometimes its stylized but David definitely has his hands all over the scenes and his direction. He wants it exactly as he wants it. Most of the time he was not impressed with our first read of a scene. We would read it and he would say something like “Well, you’ll get it next time. You’ll get it eventually”. I’d never really know what he was talking about.

MH: How was it working with Kyle MacLachlan’s ‘Dougie’ character? What were you told about that whole scenario?

MH: Your first scene also involved you being on the receiving end of ‘Janey-E’s’ anger. What was it like working with Naomi Watts?

LC: She was amazing, very personable and vulnerable. I was surprised that she was so excited and nervous as much as she’s worked. We all wrapped minds together really quick and she was just awesome to work with, really cool person. It was a lot of fun working with her. 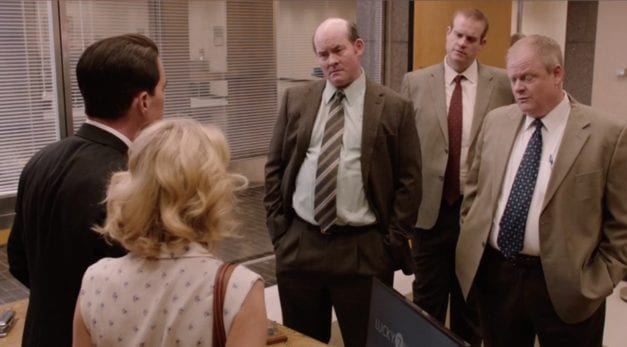 MH: The last time we see the brothers they receive the information back from ‘Dougie’s’ fingerprints, what do you think happened to them next?

LC: I have no idea what happened. David Lynch did say, “We’re going to make another series for the Fusco brothers” (laughs). I don’t think that’s going to happen but they are kind of iconic and they are a really interesting trio of characters. Anything can happen with them.

MH: Describe to us what it’s like working with David Lynch.

LC: It’s a lot like what you would expect working with David Lynch. He’s mysterious, yet very personable. He’s very intimate at times when he talks to you. He loves actors and he loves storytelling and he’s creating every second. His mind is constantly working and his eyes are constantly darting around and in between scenes he’s coming up with ideas. He’ll stop and pause when he’s talking to you and really think about what he’s saying. He’s excited about the whole process but he’s creating on set at every moment. He doesn’t take anything for granted and he’s coming up with stuff as you speak sometimes. The monologue with Eric’s character in our last scene when he’s talking on the phone, he came up with that right before it was shot. He told Eric to write this down and he gave him the whole monologue. It made Eric kind of nervous because he was just making up stuff on the spot but David was like “Write this down. You’re going to say this. You’re talking to your mother on the phone”. I was like “What do I do?” and David said “You just sit there and eat pie. What kind of pie would you like?” I hadn’t watched Twin Peaks so I didn’t know what he was talking about so I told him I’d eat any kind of pie. They gave me peach pie. I don’t think they had any cherry around.

MH: If given the opportunity would you ever reprise the role in a future season?

LC: Of course I would. I’m an actor, I act. People offer me roles and I’ll do it. I don’t really have the kind of career where I can turn down too much unless things are really bad or underpaid. Generally, I’m an actor for hire and its a decent script and you’re going to pay me, I’ll show up on your set, absolutely.

LC: Really just hanging out with David and Eric. We talked like brothers the whole time, nonstop talking. I think the most fun I had on set was leaving set, we had our last lunch together down the road at this real old school joint, a classic diner. We just went and had lunch and went back to set but I thought it was a lot of fun. Felt like we were a part of old Hollywood. Taking that lunch break and then driving back to finish up work on a David Lynch movie was awesome. He’s an iconic guy and it’s just a real pleasure to be around that kind of artist. He’s a thrilling, charismatic guy to be around and what a cool set to be on. That last day I think was the most memorable.

MH: What about what’s next for you, do you have any upcoming projects you’d like to tell us about?

LC: I have a film coming out at the end of year that I wrote called Life Support. I wrote, directed and starred in it. Again you’ll see David and Eric in it as well as a few other people that you’ll recognize.