Beautiful nightmares dwell in the unconscious recesses of desires unfulfilled and fears realized. Horror gives viewers a way to wade through those delusions with careful audacity. The experience entices the meek and excitable alike to tread into otherwise shunned emotional pieces, especially when it comes to despair’s shadows. 1968 had a tight grasp on turning art into painful reminders as the year skipped from one new terror to the next. Summarizing the period’s woes would be no easy task for artists of the time. Surprisingly, a writer who had died over a hundred years earlier would emerge to tell the tale of a period that was all too consumed with its uncompromising villainy.

Edgar Allan Poe was a man ahead of his time. His stories seemed to transfix and disturb readers long before 1968 was a glimmer in history’s all-seeing eyes. Much like his woeful narrators, this master of the macabre was a misunderstood genius that found his personal legacy smeared by a vicious rival. In the zeal to destroy another human being, this ill-meaning scourge instead laid the backstory to build a legend. Although he never experienced cinema, there was a cinematic ambiance to Poe’s work. His influence was already finding ways to infiltrate mainstream consciousness through the usual routes. By the 1960s, the author’s works were taught in classrooms and idolized by the creatives who ran with equally dreadful notions. As the dark overtones of the decade came to an impasse with impracticable morals, the stories took on new meaning. They became as timely as they were timeless to the century which came before.

It was the inextinguishable fire that would stoke the imaginative world of pain and cruelty known as Spirits of the Dead. The film’s tangled reality offered audiences an unencumbered look at their psyche’s own terrors. Its series of vignettes weaved classic tales into an artistic statement that played on the era’s own devious intentions. Led by three iconic filmmakers, it was an ambitious excursion that took the heart of Poe’s own work and loosely broke it into three captivating dimensions. Each one would prove to be a darkly fascinating segment of the human persona. 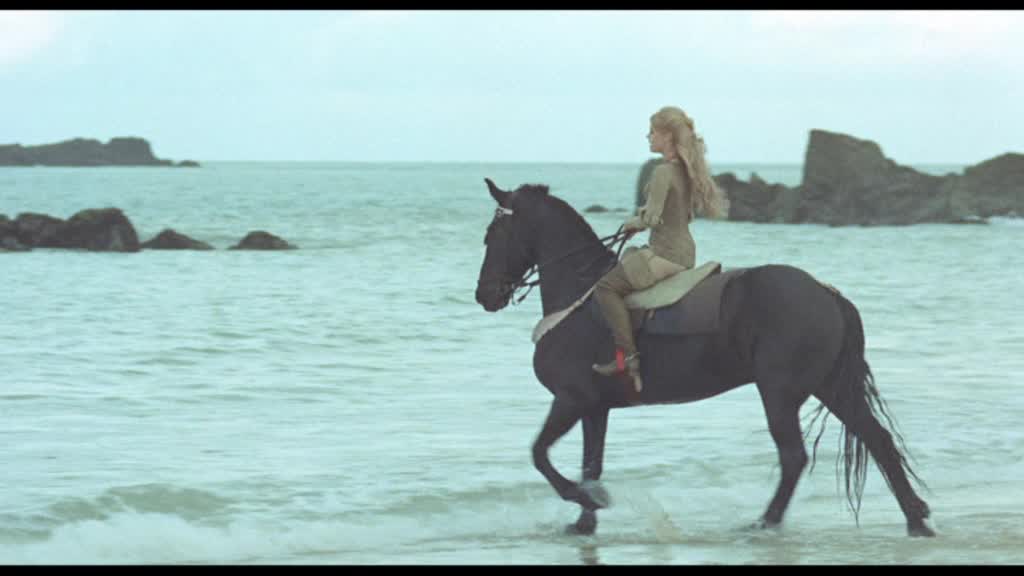 The Echo of Dark Emotions “Metzengerstein”

Revenge and destruction can devour a person’s humanity in minuscule bites. When someone realizes these aspects dwell within them, resolutions often push the living vessel beyond their limits. “Metzengerstein” is itself a glimpse into an easily defined world of people who choose their calamitous desires over an abundance of startling truths. At the center of the segment’s universe sits a character that believes her own ambitions and goals supersede the moral compasses that inhabit everyone. Countess Frederique’s actions are devious beyond measure; a woman living with an unprincipled childlike spirit that is free from rules or punishments. A child of fortune, she receives the entire “Metzengerstein” fortune without restraint. The malcontent transforms into a monster of the flesh with each passing day. Only when she hears the savage word no does her truest villainy come pouring out. The deepest permeations of revenge pulse through her veins in a buzzing mix of adrenaline and entitlement. Vadim’s gorgeous visions and symbolism remind audiences that true beauty can still become a grotesque entity when vengeance grows. Nowhere is that more present than the animalistic existence that surrounds her.

A dark horse appears to tease the Countess over her delusions of grandeur and loves unfulfilled. More than a sign, the details release a universal brand of torture that is purely set to the frequency of its diabolical mistress. Her final decision to ride into death with the untamed steed permeates a surrender to the things she hoped to keep locked away. It is not far from the path of living without edge that pushed many ’60s survivors to their own breaking points. With the lack of control or reason, these lost incarnations were falling deeper and deeper into their interpretations of freedom without complete ruination. At once, their situation becomes both a condemnation and acceptance of the changing ethical landscapes on the horizon. 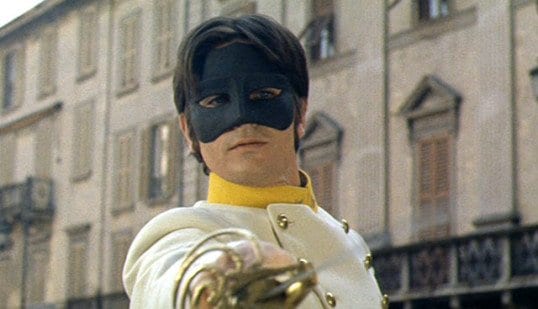 Cruelty By Any Other Name “William Wilson”

The parable of “William Wilson” is at its core the true division that lives inside everyone. His struggle hinges on an exaggerated moral conflict which is strangely familiar to the human condition. Like all steps into a changing morality, Wilson’s clashes of undeniable good and evil force a choice that is as subjective as it is obligatory. In a world that often refuses to challenge the darkness, his pursuits are increasingly tethered to the only morality he exalts. This despicable narrator relays particular stories of his barbarism as if they were tales told from someone else’s sick perversions. He confesses only when pressed with the ideology that he has destroyed himself by silencing the one true critic of his misdeeds. The particular events Wilson chooses to relay are carefully chosen representations of bigger principles. Flawed memories from the narrator produce unreliable truths about what brought him to this moment. There is something bold that connects this peculiar recanting under such circumstances.

While engrossed by his own reflection in the guise of another, he is consciously destructive to the women who propagate his world. Malle’s vision for victimization was itself akin to the gender politics that were eating away at the fabric of 1968’s existence. As women fought for equality, there was an underlying feeling among some that they would prefer their feminine visions to be tamed caricatures. This sentiment swells into a putrid state as Wilson attempts to dissect a woman under the guise of scientific curiosity. The character himself reveals underlying intentions about a male perspective on femininity. Removing the heart is, as Wilson states, the best way to take “despair and the pain of love” from the mass of humanity which lays before him. He ties the act to the restoration of a “purity” abandoned by the usual human temptations. As always, it is the person without purity that demands it from those who have the misfortune to encounter their earthly spaces.

The High Cost of Getting What You Want “Toby Dammit”

Fame has always been a fleeting, but ultimately enticing goal that supersedes even basic emotions. In the world of “Toby Dammit”, the highest acclaims have long since left its protagonist on the verge of total collapse. Propelling him through the dark demise is the innocence of tainted youth and the fearlessness of mechanisms. It is a constant balancing act between false ideals and materialistic goals which present unenviable solutions. The golden chariot that carries him through the nightmare, a Ferrari Fantuzzi, is an icon leading the way as he revs ever closer to a certain demise. This vivid beast of a machine is stylish to a fault and embodies a materialism that can only be encountered by those rich enough to get behind the wheel. In this Fellini envisioned delusion, there is no more symbolic gesture than the car’s use as a token of success among the excesses. The real world, just as it is in Dammit’s Italian version of the universe, promotes indulgences to the masses over truly important goals.

Those who have fame need more, those who want it will do anything to have it. There is a resonance that only true power, wealth, and fame can fill the voids that make up any human. The logic alone creates a never-ending cycle of wanting more, even when it takes someone to extremity. Like Dammit’s dilemma, a force leads people to their own breaks in the road. Only the driver can make the choice to go forward into their own abyss or turn around for an uncertain universe that awaits them. It was the ultimate ’60s game with a decadent punishment that no-one could afford.

Tales told through the ages connect and define human conditions into one complex form. When it came to 1968’s brand of horror, those varied stories came closer to the truths than many could face. In Spirits of the Dead, viewers failed to find a refuge as they encountered the harsh realities which fiction hides so well. Whether kept at bay or fully functioning, the film was a cautious embrace of the unspoken monsters that ensconce themselves among flesh and bones.