When Lost made its debut on ABC about 14 years ago, it was unlike anything I had ever seen before on television. It had engaging suspense, surprising humor, and a whole boatload of mystery.

At the time of the Lost premiere in September 2004, I was in the middle of a 2-month backpacking trip through Europe. Therefore I missed the initial buzz of the show, and it wasn’t until nearing the first season finale that my mom told me about the show and suggested I give it a chance. At least check out the pilot episode, she said.

I was hooked immediately. Tearing through the first season in about a week (watching on VHS recordings — this was before DVR and On-Demand became an ingrained part of our lives), I caught up in time to watch the excellent Lost Season 1 finale: “Exodus.”

The viewing of that finale was magical at the time. And rewatching 14 years later, the magic is still there.

Throughout its entire run, Lost was almost more of an event than a television show. It was something you’d watch live and talk about the following day. (I had a many “What the heck just happened last night?” conversations at work while Lost was airing over the years.) There aren’t many shows like that currently, despite the overwhelming amount of Peak TV programming available right now. Game of Thrones might come close, but I don’t think anything will be able to re-create Lost‘s event-like status.

“Exodus” was a great example of this. The Lost Season 1 finale was 3 hours long (including commercial breaks), airing the first hour on May 18, 2005 and the second 2 hours on May 25. It was an exciting and fun viewing experience — despite having to sit through all the commercials.

It has been years since I watched Lost (after the original run, I did rewatch the entire thing again), so I was curious as to how the show would hold up for me. It didn’t take long to remember how much I loved Lost, and for what reasons.

Early on in the first hour of “Exodus” we are treated to a scene of the castaways all working together to build the raft that would ideally allow them to go in search of help off the island. As the camera jumps from Hurley, to Kate, to Sawyer, to Shannon, to Sayid, to Locke, to Charlie, to Sun, and so on, I realized how much I genuinely missed all of these characters.

And that is really the reason Lost was such a special television show: its characters. Yes, I loved the mystery and the flashbacks and the funny Hurley one-liners. But the show did an amazing job of making you feel for the characters. And it’s really almost unbelievable how many good characters there were. Not to mention all of the great characters that were introduced in later seasons, such as Ben, Desmond, and Juliette. I don’t think another TV show has produced so many characters that I cared for so deeply. (Deadwood might come close, but I think I’ll give Lost the edge.)

After the initial failed launch of the raft, “Exodus” splits into 3 main storylines before ending in a way I’ll never forget. But first I’d like to talk about the flashbacks.

Instead of focusing on only one character, as we typically see in Lost, the flashbacks in “Exodus” jump around to show us the different characters from the island on the day of the infamous Oceanic Flight 815.

We don’t learn much about the characters that we hadn’t seen before. Charlie is struggling with his drug addiction. Hurley is running into a string of bad luck (and being bombarded with the Numbers at seemingly every turn). Kate is dealing with U.S. marshal Edward Mars.

The only real new development comes during Jack’s flashback, as he meets a character who doesn’t show up on the island until the second season: Ana Lucia. 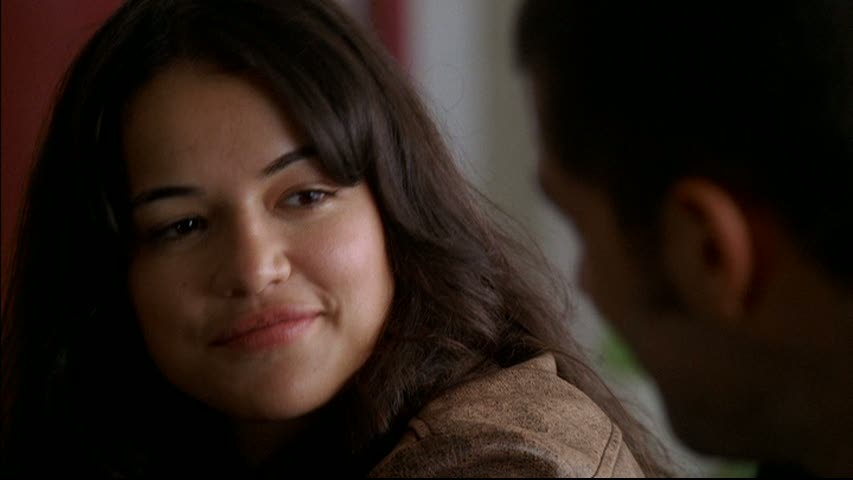 But despite the lack of new backstory being explored, the flashbacks are still entertaining, as we see different characters fatefully cross over with each other. Sayid asks Shannon to watch his bag in the airport and also briefly appears in Jin’s flashback. Locke rolls by in his wheelchair while Michael is making a phone call to his mother. Charlie is in the hotel elevator as Hurley hurries off to the airport himself.

It’s fun to see the lives of these characters wound together even before they all end up stranded on an island together. As Locke says in this episode (and is confirmed much later in the series), all of these people were “brought” to the island — it wasn’t all just an accident.

The string of flashbacks culminates in one of the many classic montages from Season 1, as we see all of the survivors boarding the plane, not knowing what will ultimately happen to them a few hours later. Hurley boarding the plane in a rush as one of the final passengers and giving a thumbs-up to Walt — it still tugs at the heart strings.

The Raft and Walt

At the end of the first hour of “Exodus,” the raft is successfully launched, manned by Michael, Walt, Jin, and Sawyer. I remember being somewhat surprised that the raft actually made its launch (albeit briefly, it turns out) and was fascinated with the possibility of some of the people leaving the island.

Would they die during their journey? Would they reach safety and spend the remainder of the show off-island? The death of Boone taught us that no one on Lost was safe, so I felt anything was possible. What ends up happening, however, was not something I expected.

When the raft’s Sayid-rigged radar system picks up a nearby vessel that appears to be traveling in the opposite direction, Michael shoots off the group’s only flare. The blinking dot turns around and starts heading back toward the raft — they’re saved! Or so we think.

In actuality, the boat is inhabited by some of the Others (although at this point we don’t know they are “the Others”), so not only will they not be providing aid, but they demand that Walt be handed over — and then they blow up the raft for good measure.

Even on my re-watch, Mr. Friendly’s “we’re gonna have to take your boy” puts a chill down my back. And then you remember Danielle’s line from earlier in the episode, when she says the Others were looking for “the boy.” It wasn’t Claire’s son Aaron they were looking for, but Walt. A great twist. 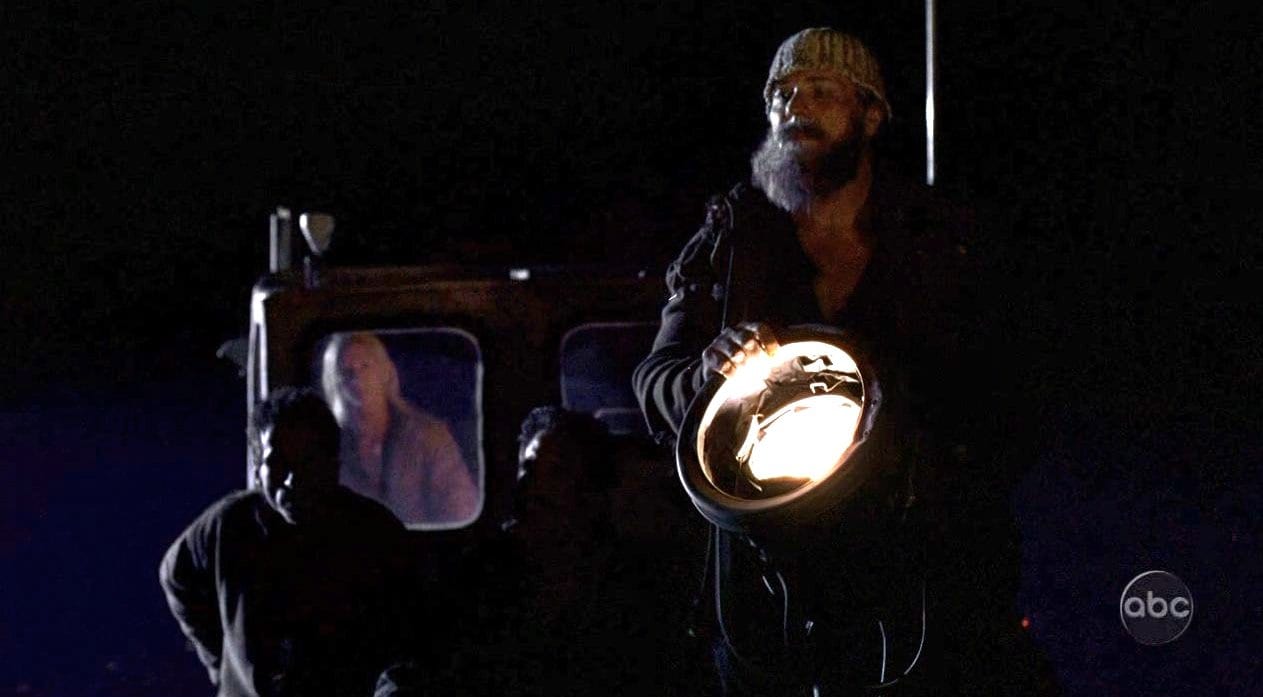 The raft scene left quite the cliffhanger at the end of Season 1, with the lives of Sawyer, Jin, Walt, and Michael all up in the air. For me one of my biggest disappointments with Lost is Walt’s unfulfilled story line. The show really built him up to be special, culminating in his kidnapping in “Exodus.” But there’s never a real payoff to that build-up.

The raft cliffhanger wasn’t the only one we see in “Exodus.”

The Black Rock, Dynamite, and the Hatch

The other main storyline of “Exodus” involves Jack, Kate, Locke, Hurley, and Arzt heading to the Black Rock to recover dynamite in hopes of blowing up the hatch door.

Over the course of the show’s run, dozens of these kinds of adventures show different combinations of characters traipsing across the island, narrowly escaping danger. Lost was great at that.

But the first trip to the Black Rock for dynamite is one of the most memorable for me.

For starters, it shows us exactly what the Black Rock is — an ancient wrecked trading ship and not an actual rock formation, as I had assumed when Danielle Rousseau first brought it up earlier in the first season.

The Black Rock ends up being one of Lost‘s biggest mysteries. As Hurley, always the voice of the curious audience member, says when they come upon the ship: “How does something like this happen?”

Well, despite periodic returns to the Black Rock throughout the seasons (providing the ever-convenient source of dynamite on the island), we don’t learn how the ship ended up on the middle of the island until Lost‘s final season, only a few episodes from the end of the series.

Watching the Black Rock secret unfold in the first season finale, now knowing how it all pans out, makes this story line in “Exodus” even more special.

The dynamite scene also puts on a clinic for building tension. In one of my college creative writing classes, I remember the professor asking one of my classmates to blow up a balloon until it popped. We all sat there waiting, laughing nervously, unsure of when the blast would come.

That’s exactly how I feel while watching Red-shirt Arzt wrap a stick of old dynamite with muddy rags in an attempt to keep it cool. I know the explosion is coming, but I’m still on the edge of my seat. And the moment it suddenly goes off and Hurley mutters, “Dude.” It’s perfect.

Despite the tension running through these scenes, some great humorous moments also occur, in classic Lost fashion. Hurley hilariously mispronounces Arzt’s name as “Arntz”. And one of my favorite lines in all of Lost, as Hurley tells Jack, “You’ve got some…Arzt on you.”

Finally, the dynamite story line leads to one of the most iconic images of the series. The hatch door is blown off and the camera falls backward down the hole, staring back up at Jack and Locke, gripping out a lonely torch. And just when we think we’ll be shown what is at the bottom of the hatch, as we’ve been wondering all season, the LOST noise sounds and the screen fades to black.

The first time I watched the event that was “Exodus,” I was a bit frustrated. (“THEY DIDN’T SHOW US WHAT WAS IN THE HATCH!”) I had so many questions that fueled a need to see what happened next.

Luckily, watching it now, knowing everything that happens, I can just sit back and enjoy the episode for the exciting piece of television genius that it is.