Days before his 86th birthday, legendary director Alejandro Jodorowsky along with Satori Films took to Kickstarter to fund the auteur’s next film Endless Poetry.

Poesía sin fin (Endless Poetry) illuminates — through the autobiographical lens of the director himself — his early life when he dedicated himself to poetry and never looked back. The story takes place in Chile, the birthplace of Alejandro Jodorowsky, representing the next stop on the “Where in the World is 25 Years Later?” journey.

The second part of a planned autobiographical trilogy, Endless Poetry is a captivating marvel in which Jodorowsky takes us back in time, facing the camera as he tells us what’s going to happen, introducing us to himself as a child as the backgrounds change and the city becomes what it was during his youth. Sets are erected, and the film takes on the spirit of a play with assemblages that move, and a large prop train is seen being carried by actors walking it into place. What we are seeing is an act of love; Jodorowsky is building the world in which he lived to show us the moments in which he devoted his life to art. Portraits of storefronts that existed when he was a child behind Jodorowsky on-screen explaining what “pulled him out of the abyss with a single sentence.” The struggle and the torment of the young Alejandro, climbing above his father’s verbal and physical abuse, all while feeling betrayed by his mother’s passivity is a powerful journey to take, but the illumination that came from the devotion to art after years of such torment leads to a rich understanding of the heart of a true artist.

So, why Kickstarter? Why would a director as well-known as Alejandro Jodorowsky resort to crowdfunding? Kickstarter seemed like the perfect vehicle for Jodorowsky to best actualize his vision, and he thought that the people, rather than the studios, would be more apt to understand his concept of cinema. As Jodorowsky states on the campaign page of his Kickstarter’s site: “The necessity for expression is more important than the type of film you want to make. I need to express myself. I don’t think about investors, industries, or commercialisation.” By relying on micro-producers across the world, Jodorowsky could “transform money into poetry.” His dedication to art and the shared nature of human expression coupled with his desire to “fill the world with poetry” make crowdfunding sources like Kickstarter perfect for communally devoted artists like Jodorowsky. The only way to produce an offering to both film and the public for Jodorowsky was to incorporate the audience “who are infinitely more profound, intelligent and sensitive than the Hollywood industry would like to admit.” Joining forces with the people within the world and those who would eventually see his film allowed Jodorowsky not only to present his own truths but also to help audiences realize their truths, as well.

In La danza de la realidad (The Dance of Reality), Alejandro Jodorowsky showcases his life as the unhappy and alienated child he was, born to an uprooted family, struggling to maintain their identity while adapting to their new surroundings. Filmed in the same location as his birth in the Chilean coastal town Tocopilla, the audience begins to understand how Alejandro Jodorowsky’s philosophy and relationship to the world was formed and how he started to develop his unique artistic expression. Poesía sin fin (Endless Poetry) picks up where The Dance left off, depicting in vivid detail the adolescence and young adult life of Alejandro Jodorowsky, as only he could do. The directorial decisions Jodorowsky makes throughout the film are remarkable. Shooting each scene in the locations in which they took place, utilizing his eldest and youngest son to play his father and the younger version of himself, respectively, and casting contemporary singers and artists as historical figures and presences in his life is a brilliant way to bring together the past and the present. The visual cues that fill the film informing the audience of both the historical moments in which the film takes place and the setting in which Jodorowsky grew up amongst are powerfully expressed in unique ways within the film.

During a time in Jodorowsky’s life in which Chile was especially war-torn, the actors on-screen appear with a thin layer of dust covering themselves with artwork on their walls depicting tanks, and radio broadcasts filling the air around them with reminders of death and violence. When the young Jodorowsky ends his relationship with the artist who helped him bring alive the poetry within his own life, a man is sharing the frame with the pair hanging from an apparent suicide as a reminder of the transformation that one undertakes when in a relationship and the pain of losing love. “I’ve turned into a mirror that only reflects your image” is the line that Jodorowsky’s on-screen version of his young self delivers to his significant other ending their relationship.

His appearance of assuredness is shattered when he then goes to a bar to drink his sorrows away among patrons clad in black with sullen downtrodden faces. The outward representation of the inner turbulence of his on-screen persona, as he seeks to live his life without a mask and separate himself from the scores of those that live around him with whom he finds impossible to blend in amongst is a stunning display. Reminding us at various points throughout the film of Endless Poetry’s autobiographical nature, Alejandro Jodorowsky steps into frame and reminds his younger self of his truth and purpose in the world, as he goes through the stages of his existence telling the story of his life and highlighting the various moments of self-discovery. 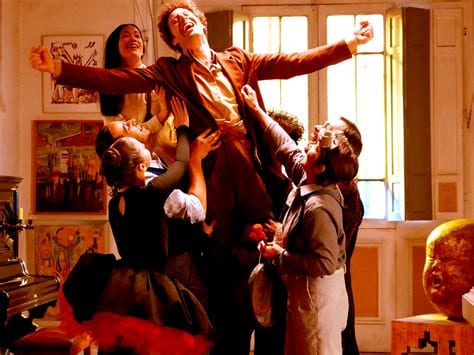 If you’re fortunate enough to see the world differently, don’t adhere to the expectations of others or how they experience life. No-one else’s vision should cloud your own, nor should their presumptions about what your life will become interfere with you living your truth. These seem to be the overarching themes or lessons within Endless Poetry. The young Jodorowsky hid his devotion to poetry from his father who wanted him to be a doctor behind biology books to please him, but as he diminished who he was to make his father happy, he was devastating himself. Each time Alejandro was shamed into putting his poetry book down, he stifled the reason for his existence and denied his inner truth and what gave his life meaning. “You’d be guilty if you lived as others want you to live” is a piece of advice and reassurance delivered from the Alejandro of the present to the Alejandro of the past. In this way, Endless Poetry is an anthem for creatives and those struggling to maintain their commitment to their art in a world that seeks to convince them that their passions are only serviceable as a hobby. “Our world is suffering from a devastating absence of poetry” Jodorowsky relays in a video message on Endless Poetry’s Kickstarter campaign page. He conceptualizes this absence of poetry in the film as people wearing masks or people suddenly walking on all fours and barking like dogs when someone who is living their art passes them.

The imagery and the films of Alejandro Jodorowsky’s storied career are what the world received by letting him live his truth and his desires for cinema. It’s incredible to think of what the world of cinema would have been robbed of had Jodorowsky pursued medicine instead of his art. A consistent and forceful reminder to the world of cinema to never fear to forward the boundaries of film and the expression that can come from such push, Alejandro Jodorowsky has left an indelible impression in the world of film matched by few other working directors. Blending family, individualism, and personal expression in Endless Poetry, Jodorowsky reveals that distancing ourselves from those to whom we are related isn’t the same as dissolving our past, but rather a necessary aspect to maintaining a commitment to experience life in our unique way and refusing to see the world through anyone else’s eyes. Simply being is a powerful thing and one that we often disregard. Not recognizing the fact that our existence is something to be celebrated and our power of expression and our ability to give life meaning by merely living it are potent reminders and the brilliantly deceitfully simplistic message of Endless Poetry.