Relationships have a way of saying more about a person than they’ll ever care to admit. Everyone needs these mortal connections to thrive, but sometimes the individual bonds make life perfectly unsettled. Nothing sums this up better than the peculiar friendship of Felix Ungar and Oscar Madison. Both men find unusual inspiration in each other, while fully realizing they might not be the best influences for their not-so-special predicaments. Full of truthful qualities, these two classic film characters embody every element of ’60s relationships.

The Odd Couple is a testament to the decade’s attitudes toward romance, loneliness, and even true friendship. Adapted from the play of the same name, this exploration of human interdependence revolves around its two unlikely leads. In Felix and Oscar, there is symbolism that reaches far beyond their casual traits. Each one takes on the ideals as well as the unflattering realities of a period grappling with its own difficulties. Both characters are far from perfect, with their own baggage on full display. That openness towards showing imperfections offers a more complete picture of what it meant to be an adult among the changing times. In its honesty and humor, the portrayals gave viewers a chance to explore their similar failings outside of the cinematic realm.

The Introvert and The Extrovert

Felix Ungar is the living, breathing representation of bowing to the stresses and fears that haunt a mind. The ’60s was full of all too familiar quandaries, especially when it came to 1968’s carefully monitored chaos. It was easy to give into the neurosis at any moment and many did with the greatest of ease. There’s something about Felix’s embrace of the paranoia as well as unobtainable perfection that is as true as it is heartbreaking. His hypochondria stands out as an ode to the sicknesses that can envelop anyone if they allow it to take hold. While the conditions are far from real, his acceptance of their symptoms is a direct reflection of the perceived societal illnesses that took over rational thought with only a passing phrase. On a more singular level, it also gives Felix a sense of control over the things that often defy the authority’s tightly held grasp. Giving in to the aches, pains, and phantom diseases become almost a coping mechanism for the life unled on his part.

In contrast to the reservations and inhibitions of Felix is Oscar Madison. His actions present a total rebuke of everything that was feared among the decade’s various decisions. For this sports writer, personal goals are simple, varying reactions easy to pinpoint. He wants to establish human connections in every aspect of his life and does so with melancholy vigor. From poker games to set-up dates, this character thrives on being among the company of others. In that respect, it becomes Oscar’s coping mechanism as he weaves his way through various complications in his own life. The providing and annoyance he finds with Felix only exacerbate the very real perceptions he’s cultivated during a lifetime.

The All Too Breakable Bonds Of Friendship

The film relies on creating a connection between two men who have so little in common, yet deliberately put aside those differences to create a genuine camaraderie. It’s not about what they believe or the ideology that surrounds them as their story unfolds. Oscar and Felix find friendship and transcend the petty annoyances and political beliefs that can easily overtake a discussion. That overall mentality was sorely lacking as 1968 continued to generate divides which challenged even the closest of relationships. The concepts of friendship were being torn apart as friends went to war and those who stayed behind saw the remnants of societal hatred at home. It was as far from the term as a person could get without living a cold, lonely existence. When all is said and done, the world relies on a shared humanity to endure. Oscar and Felix’s bond goes beyond the norms prescribed by definition and reaches into pure empathy.

Their overall acceptance of each other deliberately chooses care for another life over evaluating their shared goals or interests. It’s an exercise that shapes itself among all too common circumstances. The film’s first encounters with friendship are built on the morbid premise of Felix’s planned demise. A concern for his outcome overrides the potentially glib look at what brought him to the brink. That mentality stretches through the acts that make up this voyeuristic view into their shared existence. Even the eventual end of the story encourages a hopeful mentality towards the ideas of lasting friendships as they venture forward in life. It reaches beyond the chaos and differences to find something more important than division. 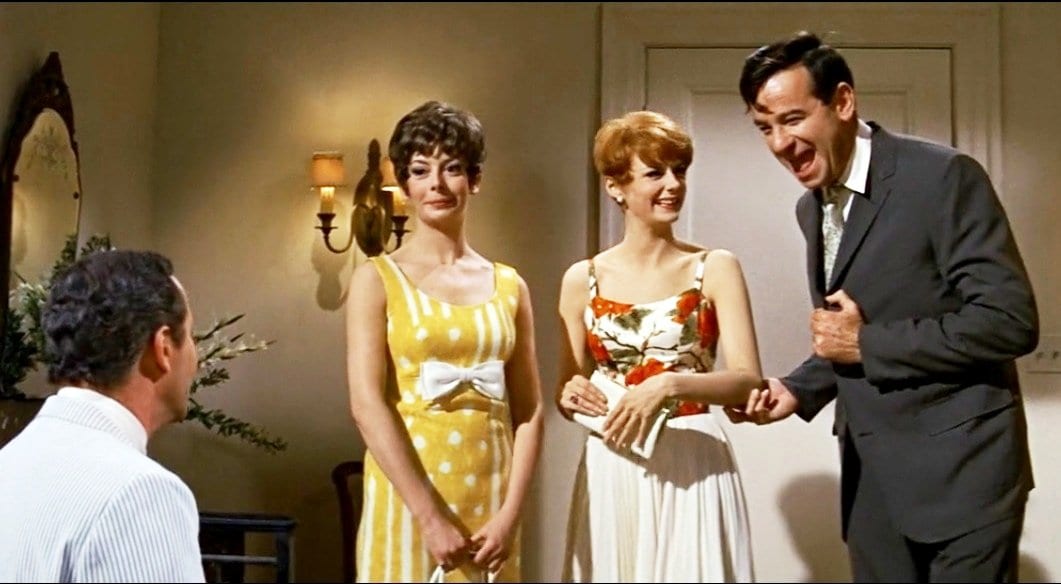 A Date With Pigeons

In the scope of relationships, nothing is as treacherous as dating. Beyond everything, it is the audition for someone to occupy one of life’s most important roles. Felix and Oscar take their own approaches to the precarious world of dating. While Oscar is more outgoing with the opposite sex, Felix shows a willful timidity that is based in sufferance. The way both men face the subject acts as a surprisingly direct metaphor for the ’60s changing perceptions of dating, if not romance. On one end sits Oscar and his boldly crafted strategies towards women; representing the period’s outward attitudes toward overt sexuality. No longer were their hierarchies and established traditions towards sex ideals to follow the daters of 1968. The free love generation was breaking off from those ideas while making the concepts of open dating a part of societal norms. Instead, these movements encouraged romantic relationships on someone’s own terms.

Oscar may be far from a free love hippie, but he actually personifies the straightforward concepts that accompanied the era’s sentiments. The character sees no walls between himself and the women he encounters. He openly engages them in conversation, while blatantly pursuing the concept of something more. His major failing strangely becomes one of Felix’s endearing qualities throughout the night. As he engages the Pigeon sisters, Felix is respectful to a fault. His intentions fall squarely on seeing someone who is not there, his wife. The tendency to cry for the past all too real as Felix spills his heart to the women who sit before him. It’s not as if their respective divorce and widowhood don’t matter, instead, he is transfixed by the dream life unobtainable. In that respect, the period was great for reminding women of who they were not and who they would never be. At the end of the night, both the sisters and their dates are left to think about what went wrong. It’s the autopsy of another failed experiment in ’60s culture laid bare for the audience to ponder.

The decade saw perceptions towards marriage rapidly change for couples. Divorce was no longer such a dirty word for those considering a way out of their loveless predicaments. By 1968, the subject was closer than ever to leaving its formerly instilled taboos behind. Although the surge wouldn’t hit until the ’70s, this was a time for audiences to see divorce in a venue that was less about scorn and more about humanization. The Odd Couple was one of the year’s entries to openly tackle the subject with humor and surprising honesty. Both of the leads are dealing with divorce head on and living with the unvarnished consequences. Felix just ended his marriage with divorce sure to follow; Oscar has tackled the task and lived to tell the tale. They’re going through their own unique perspectives, but seeing very different outlooks in mirroring stories. In these two characters, there’s an echoing of the crossroads many viewers were feeling internally about their thoughts on the topic. Whether they had to face it in real life or were just formulating an opinion, divorce through the eyes of the odd couple was shaping actual impressions. While the film may not have been responsible for any separations, it gave those who were going through or in the midst of an ending the free from shame opportunity to see themselves portrayed through someone else’s eyes.

Of all the things that define a human, relationships may be the most lasting. The Odd Couple took those most indelible aspects of associations and amplified them. Audiences could see themselves projected in its humor and heartbreak. After all, relationships prove there is a fine line between comedy and tragedy.