Blue Velvet premiered 32 years ago today.  Since watching Blue Velvet for the first time quite a while ago, it has always stuck with me.  For this edition of Lynch Night, I chose to delve into the theme that keeps coming back to me after watching it, again and again, duality.

“I learned that just beneath the surface there’s another world, and still different worlds as you dig deeper. I knew it as a kid, but I couldn’t find the proof. It was just a kind of feeling. There is goodness in blue skies and flowers, but another force–a wild pain and decay—also accompanies everything.” ― David Lynch

One of the reasons I love David Lynch is because he makes you think. He makes you feel.  He makes you question. Which is why for me, one of the most beautiful and questioning pieces he has ever put before our eyes is Blue Velvet. As soon as the first note of “Blue Velvet” is played on screen, we are hit with a picturesque view of beautiful blue sky, a crisp white picket fence as the backdrop of a red rose border. A fire truck drives by, followed by a school crossing guard ushering children safety across the street, more eye catching yellow flowers this time in front of that familiar fence. We are then introduced to a man quite simply watering his lawn and his wife sipping coffee. What happens next has Hitchcock-ian vibes. The man has a stroke and collapses to the ground, hose still in hand. His dog jumps at the water spray, while you see a baby toddle out from the side of the house staring down at the hurt man. Then we pan down underneath him, to the bugs, worms, and the dirt underground. No matter what you see on the sunny side, there is always the darkness that lurks beneath. There is a constant duality in David’s work, and no piece shows this duality quite like Blue Velvet.

When being introduced to Jeffrey—handsome, helpful, and eventually the hero—we think he is the bee’s knees. Though—as we are shown through his discovery of the severed ear—he has become obsessed with investigating the dark side of his hometown. As he tries to discover where the ear has come from, and we see his “relationship” with Sandy and Dorothy, the audience sees that our raven-haired boy has a dark side. He wants to help Dorothy, but he also covets her. He desires her in a way he does not with Sandy, even though she’s a “neat” girl. Sandy is all peaches and cream, goody-goody, and chicken walk; Dorothy is the opposite in so many ways. She’s worldly but tortured and damaged. It’s almost as though Jeffery’s goodness is tempted by the dark side; he wants to be good and help her, but cannot help the allure of joining her pain. Why does he find himself being drawn back to Dorothy and her nefarious crew, including Frank Booth? Is this the simplicity of good vs. evil? This is the duality that exists in all life. Some of humanity acts on their impulses, some suppress, and others choose to ignore.  This duality exists in all things. 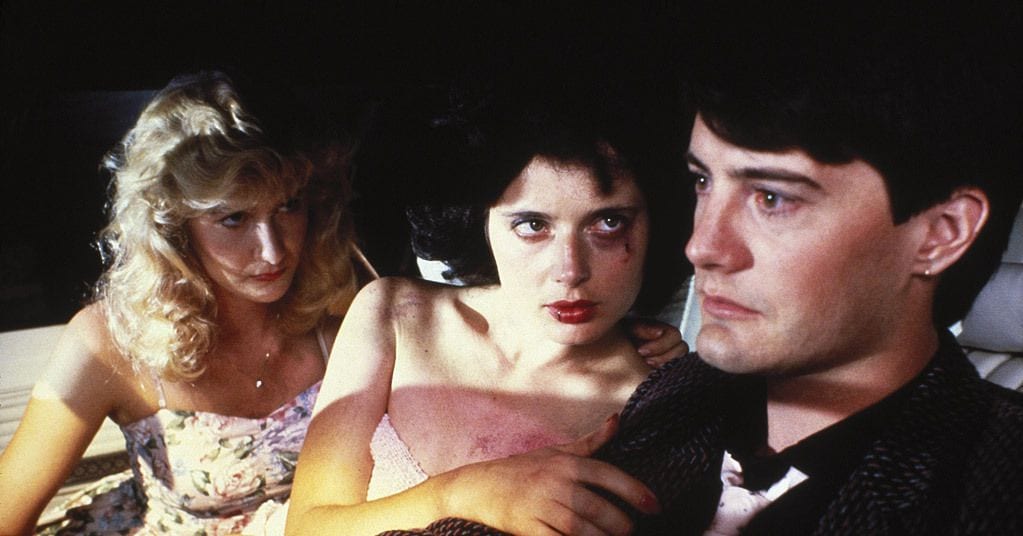 We all have this dark side. It may not be evil—it may just be questioning or just a reflex—but within us all there is a side that we keep in check. Jeffery decides to explore this side.  Occasionally, he finds excitement and pleasure in it. Note: these times are usually when Sandy is with him to play counterbalance. When he’s with Dorothy, after he wakes up to what he has done, he realizes this duality has consequences. She has felt both pleasure and pain, but he cannot separate the two from his conscience at that moment. It brings him back into his reality and back to center. Investigating our dual natures must always start at center.

Frank Booth to me is the most interesting character when it comes to duality. Many people think Frank is one of the scariest and evil characters to exist. I will not deny that Frank Booth has haunted a dream or two of mine, but I am not convinced he is truly evil. I will give you a couple of examples:

The scene where Dorothy is singing at the Slow Club, and Sandy and Jeffrey have decided to go, Jeffrey watches Frank, studies him. We all are at this point, and there is a moment within this scene that sticks out to me. Frank (unbelievably played by the late, great Dennis Hopper) listens to Dorothy sing. Jeffrey looks over and notices Frank, but this is not the vile mad man Jeffrey witnesses abusing Dorothy through the slats of her closet door. This is a different Frank; dare I say a human Frank. He is touched by Dorothy’s song. As he clutches the piece of blue velvet fabric in his hand, he starts to cry. Tears are falling down his face. Is he recalling a time that was much simpler? Is he looking back on a time where he did not feel such anger and pain in his heart? We do not know, but we do see, if only for a split second, a Frank that is showing a very relatable emotion. 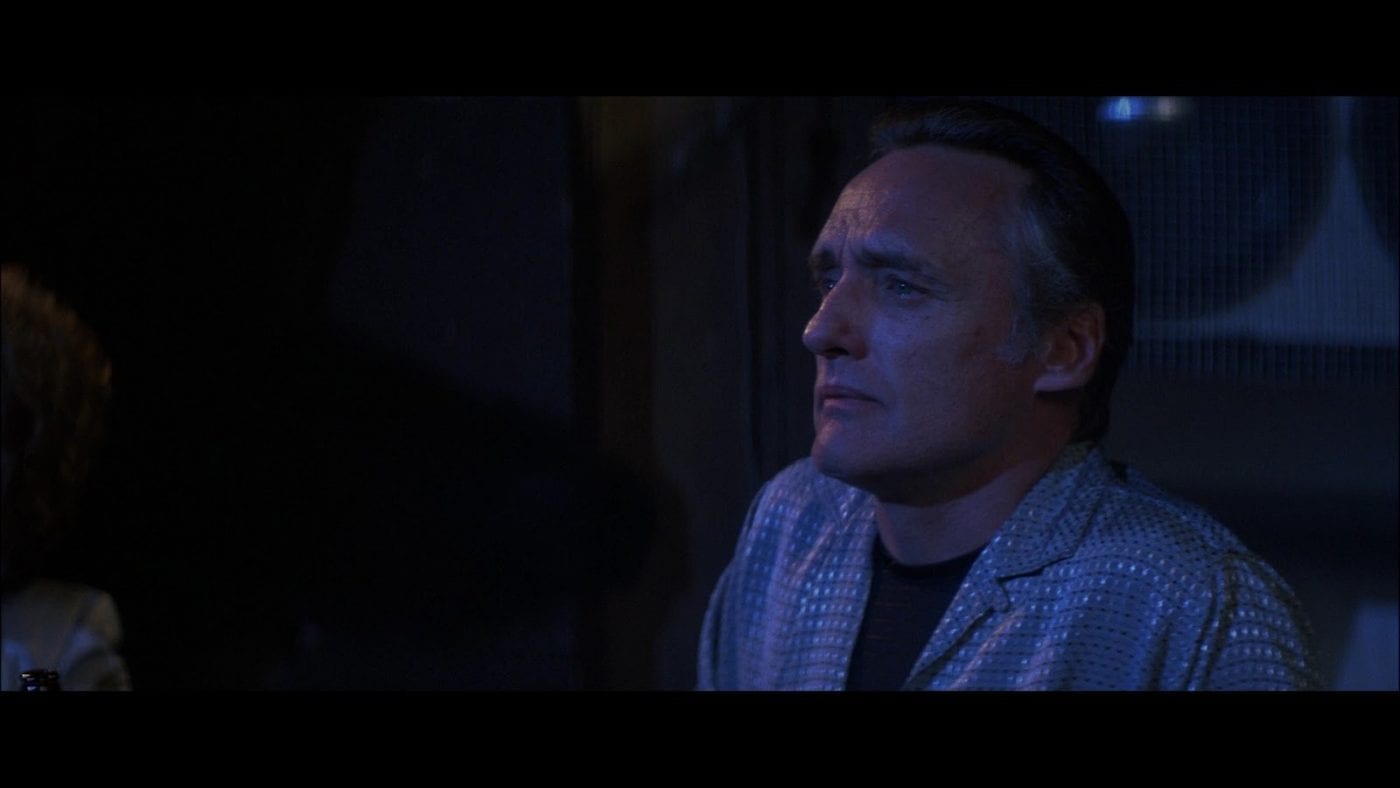 We also see another relatable emotion from Frank later on, when he’s going for a “joy ride” after catching Dorothy and Jeffrey together. When the car stops at the lumber yard, and Frank is witness to the protectiveness of Jeffrey towards Dorothy, he immediately gets upset. Jeffrey punches him in the face and Frank tells the others to get out of the car so he can “take care of him”. Once out of the car, Frank puts on lipstick and starts kissing Jeffrey. At first I thought: “He’s a sadistic maniac, so okay he’s kissing him with lipstick on.” After watching it again, I realized: this is jealousy. Pure and simple jealousy. Frank is jealous of the connection that Dorothy and Jeffrey have. He wants that. He wants to envelope that. So he kisses him as almost if to say: “What is it about you that makes you so good?” Jealousy and envy. Frank almost envies Jeffrey’s good nature, to the point of beating it out of him. Trying to break that goodness, an act which—as we soon see—fails. 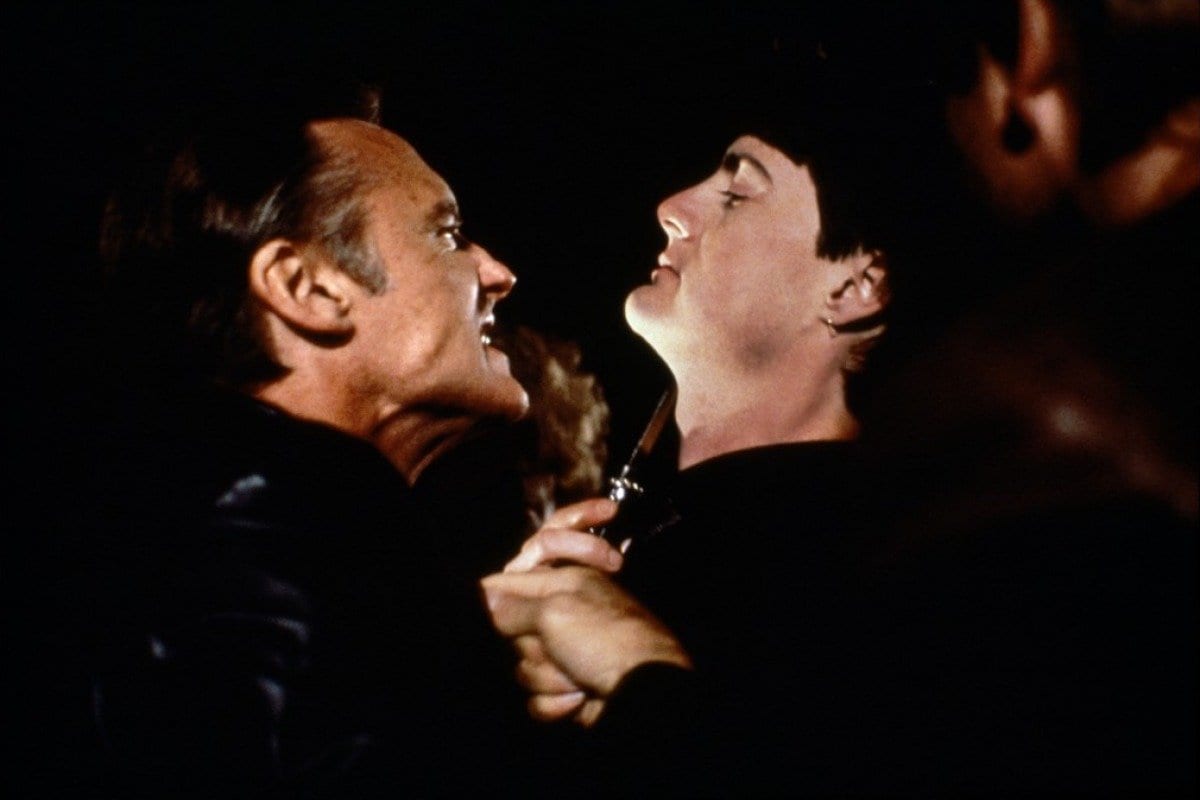 This duality rights itself at the end of Blue Velvet, with Jeffrey facing his dark side in the most ultimate of fashions: shooting Frank Booth straight in the head. Quite the final standoff! It really could have gone either way. But Jeffrey being the one to stop Frank in his tracks and putting an end to the evil that was in his, Dorothy’s, and by proxy Sandy’s lives is a large metaphor to me. To me, it is as if Lynch is saying: “Face head on whatever darkness you feel inside you, and you can face anything that comes your way.  Once you recognize that darkness, it makes the light in you that much sweeter.” It is not to say that the darkness ever is truly gone. It is never gone. However you look at it—your conscience, the little voice inside, a feeling or a thought—it is there, speaking to us, constantly. Showing us what ifs, what haves, what could be.

There will always be many ways to internalize ourselves, but what Lynch is trying to show us is that, whether we lean toward the good or bad, one always needs the other to survive and to live. What better way to show this then at the end, in the image of the robin with the beetle in its mouth. The sweetness in life cannot taste as sweet if we do not acknowledge the bitterness; but do not let the bitterness poison you to the point of forgetting how good the sweetness tastes.